The impact of the US drought on the price of corn and other feed grains and oilseeds has made the arcane subject of Renewable Identification Number (RINs) and the role of US biofuel policy of great interest this year. For example, there have been a number of recent calls to the EPA for waivers of the RFS mandates to relieve pressure on food prices for consumers and feed prices for livestock producers. In this post we review the basic economics of the ethanol market both with and without the RFS mandate, and discuss RIN valuation under both conditions. We then provide some speculation as to the support the RFS mandates are currently providing to corn prices based on recently observed RIN prices.

We start with a simple graphical representation of the market for ethanol without policy interventions (i.e. the RFS mandates) and ignoring both dynamics and uncertainty. Figure 1 shows standard supply and demand curves for ethanol, with the equilibrium price and quantity at the intersection of these two curves (PE and QE). The key point here is to consider what market factors would cause a shift in supply, demand, or both. 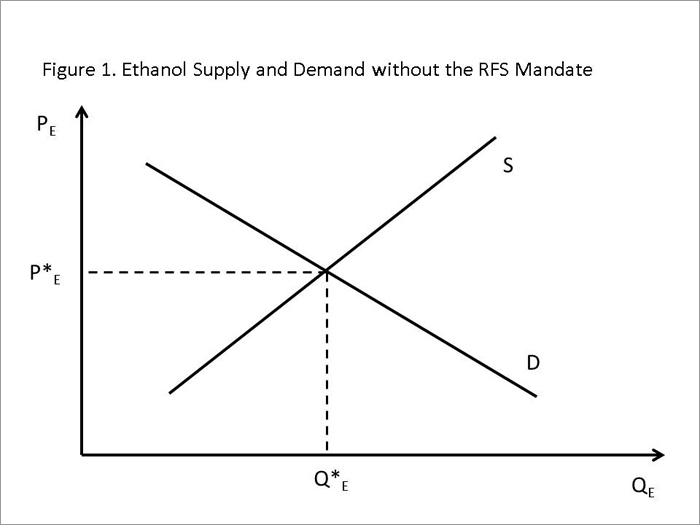 Ethanol supply is driven by ethanol production costs. For example, an increase in feedstock costs (i.e. an increase in the price of corn due to a short crop) would tend to shift the supply curve upward as ethanol producers would require higher ethanol prices to produce any given quantity. This situation is depicted in figure 2a where supply shifts from S0 to S1, increasing the equilibrium price and reducing the equilibrium quantity. The demand for ethanol is primarily driven by blending economics, or the profits/costs associated with blending ethanol with gasoline to produce retail motor fuel. An increase in the price of gasoline, holding all else constant, would lead to an upward or outward shift in the demand curve for ethanol as it becomes more profitable to use as a fuel blend component. This situation is depicted in figure 2b where ethanol demand shifts from D0 to D1, increasing the equilibrium price and quantity. 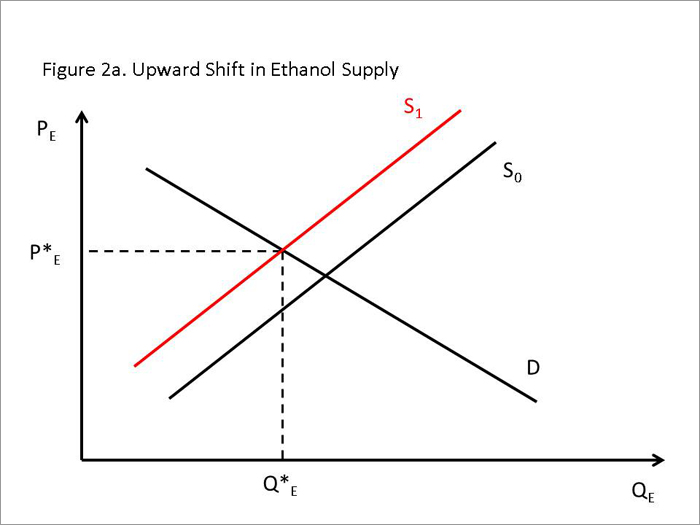 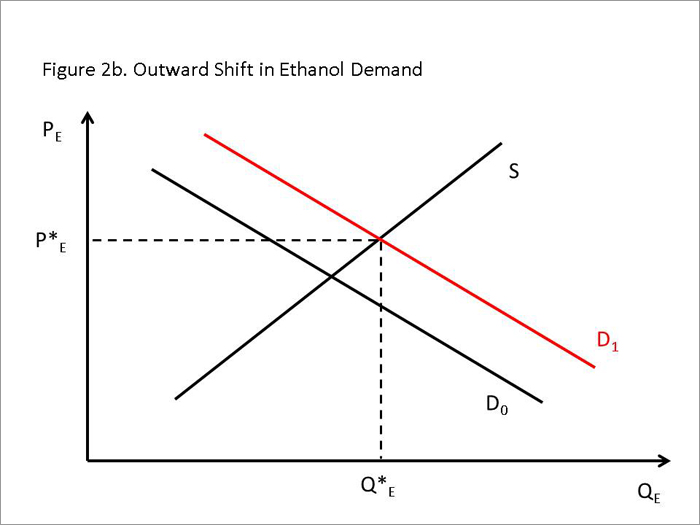 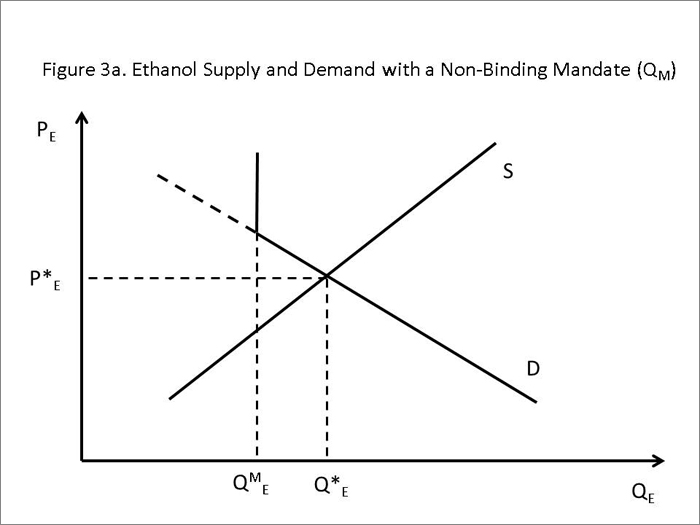 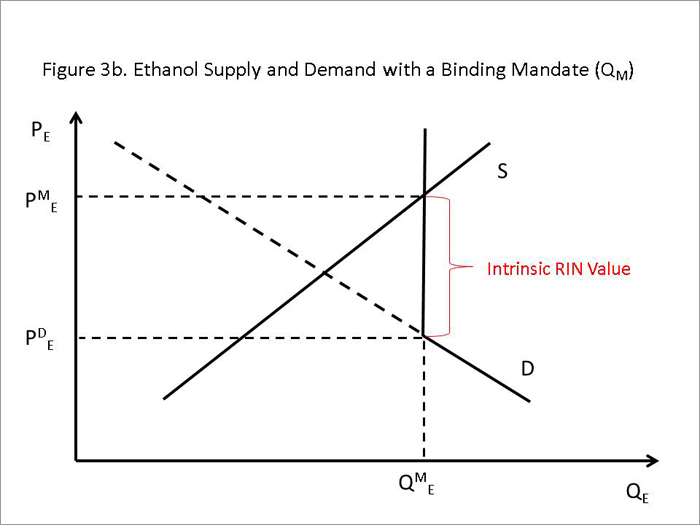 The consideration of dynamics and uncertainty add complexity to RIN valuation. Since they can be held across multiple periods and applied towards future mandates (see this post on RIN lifespans and maturities), RINS also have option values in addition to their current intrinsic value. The option value component of a RIN is based on uncertainty over whether binding mandate conditions will occur in future periods. Note that this is also why current year RINs should be worth no less than previous year RINs, since the longer lifespan would imply a larger option value.1

Furthermore, RIN values should also include a transactions cost component. RINs can be purchased and applied to an obligated party’s mandate as an alternative to physical blending. Thus, blenders can avoid the transactions costs associated with purchasing, transporting, and blending the ethanol.

The Mandate’s Impact on Corn Prices

Based on the discussion above, observed RIN values should tell us something about the impact the mandate is having on the ethanol market. The closer RIN prices are to zero, the smaller the implied effect of the mandate on ethanol production and consumption. Increases in RIN values imply either binding mandate conditions, or increased expectations for the mandate to be binding in the future.

Using this rationale, we suggest RIN prices can be used to (roughly) estimate implied support to corn prices provided by the ethanol mandate. Since a bushel of corn can be processed into approximately 2.8 gallons of ethanol, the portion of the corn price attributable to RINs can be approximated by:

For example, with 2012 ethanol RIN prices reported between $0.04 and $0.05 per gallon in August, the total implied support to corn prices is in the range of $0.11 to $0.14 per bushel. This suggests we might see limited relief in corn prices (via a reduction in ethanol and corn demand) from a mandate waiver, consistent with the recent post by Irwin and Good and analysis from Iowa State University (Babcock, 2012).

Another issue which should be considered is the potential for an EPA waiver and the direct effect on RIN prices it could have through market expectations. More specifically, observed RIN prices would include any risk of an EPA waiver perceived by the market, which will devalue existing RINs. Some of the waiver requests to the EPA had included a waiver for both 2012 and 2013. It has also been suggested this is the likely timeframe over which the EPA will make its decision. Thus, the true impact of the mandate observed via current RIN prices may be dampened by the effect of waiver expectations.

Information provided by current RIN prices suggests limited RFS mandate support to current corn prices. This is consistent with other recent studies which have noted that blending economics, rather than the mandate, continue to drive ethanol use despite significantly higher corn prices resulting from the 2012 drought. However, the simple analysis in this post includes a number of important caveats. Our discussion is conditioned on an assortment of other factors impacting ethanol supply and demand which are assumed constant. These include, but are not limited to, gasoline prices and the existing supply of RIN stocks currently estimated to be available for application towards the mandate. If gasoline prices fall, or if RIN stocks are drawn down, RIN prices could rise considerably and the impact of a 2012 or 2013 mandate waiver on corn prices could be much larger. In summary, the estimated impact on corn prices of $0.11 to $0.14/bushel should be taken only as indicative based on crude “back of the envelope” calculations.

1 An exception to this was an odd inversion observed in biodiesel RIN prices in 2012. This was likely a result of a shortage of 2011 RINs as a result of large quantities of biodiesel RINs produced in 2011 being suspected as fraudulent.