After creating a one-year extension to the 2008 Farm Bill in the midst of larger budget issues at the end of last year, Congress has resumed the Farm Bill process. Both the Senate and House Ag Committees have released 2013 Farm Bill markups (see Senate version here; House version here). Both the Senate and House drafts are similar to the versions passed by the full Senate and House Ag Committee in 2012 (see previous posts from Carl Zulauf summarizing those here and here) in that the majority of existing commodity programs (direct, countercyclical, ACRE, and SURE programs) are repealed to achieve spending reductions. However, there have been some slight changes to the programs created to replace those being repealed, particularly in the new version from the Senate. Today’s post provides a summary of some of those commodity program changes. Discussion of continued changes in other titles, such as Crop Insurance, and the budget implications will be saved for future posts.

The House Farm Bill from last year included an option for producers to choose between revenue and price protection, while the Senate Farm Bill included a revenue program only with the choice between farm and county level coverage. In the latest mark from the Senate Ag Committee, a target price program – named Adverse Market Payments (AMP) – is included in addition to the new revenue program. The 2013 Farm Bill from the House continues to include the Price Loss Coverage (PLC) program with the optional election of county level revenue coverage.

The target price program in the House version of the 2013 Farm Bill is largely the same as the PLC program included in the 2012 Farm Bill. Reference prices for all crops are fixed by Congress and are, in general, set above current CCP program target prices. In contrast to the current CCP and proposed AMP program from the Senate, payment acres are 85% of planted acreage (up to a farm’s total base acreage) and payment yields are allowed to be updated from current levels to 90% of the average farm yield from 2008 to 2012. 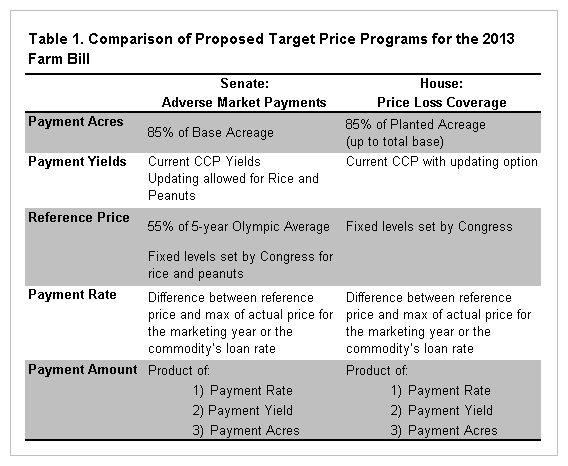 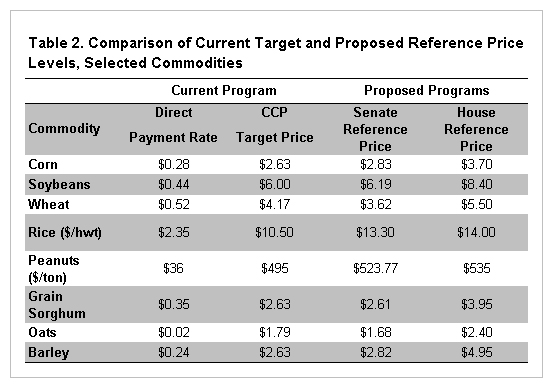 Both the Senate and House versions of the 2013 Farm Bill continue to include new revenue-based commodity programs. Both the Senate’s Ag Risk Coverage (ARC) and the House’s Revenue Loss Coverage (RLC) programs are defined similarly to those proposed in 2012. Table 3 provides a summary comparison of the main parameters of the ARC and RLC programs.

The ARC program offers the choice of coverage between farm and county level coverage, with the differences between the choices being the yields used to determine benchmark and actual revenues, and the percentage of payment acres upon which ARC payments would be received if they are triggered. The benchmark revenue is the product of Olympic-averages of crop yields and national marketing year prices over the past 5 years, and actual revenue is the product of yield and national price for the current marketing year. ARC payments are triggered if actual revenue falls below 88% of benchmark revenue, and payments are capped at 10% of benchmark revenue for the current year. Note that this is a slight change from the 89% of benchmark trigger used in the 2012 version of the ARC program.

The RLC program proposed by the House is an alternative to the PLC program (with PLC being the default choice), and provides county level revenue coverage. A key difference between RLC and ARC is that RLC payments are made based on current planted acreage rather than base. The RLC benchmark revenue is defined in the same way as for the ARC program, but actual revenue must fall below 85% of the benchmark to trigger a payment. In contrast to ARC, the RLC program uses the midseason price, or the average national price over the first 5 months of the marketing year, to determine actual revenue. 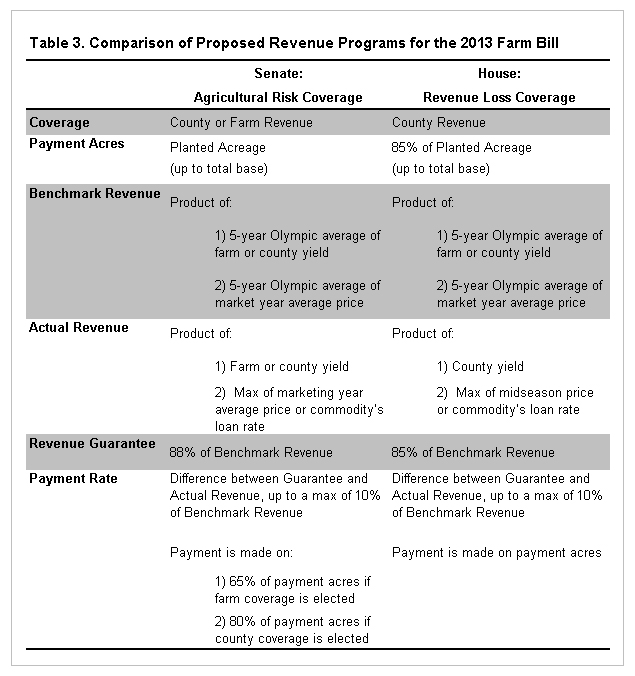 Both the Senate and House Ag Committees released mark ups for the 2013 Farm Bill this week. While both versions resemble those from 2012, there are some key differences. In particular, the Senate Farm Bill now includes a target price commodity program in addition to revenue coverage. With both versions now including target price and revenue programs it is becoming more certain that the final Farm Bill will include, at a minimum, a choice between the two program types.

Also of note is the differential treatment provided for rice and peanut producers in the Senate’s 2013 Farm Bill. Both crops are provided with a fixed reference or target price well above what would be used if the target price definition for other program crops was used. Furthermore, base acreage updates are allowed for peanut producers and payment yield updates are allowed for both peanuts and rice in the Senate version; the House version allows payment yield updating for all covered commodities.

Finally, another addition to both the Senate and House versions ties conservation and wetland protection compliance to commodity program eligibility. Therefore, producers must comply to be able to receive AMP/ARC or PLC/ARC commodity program payments. There has been significant discussion and speculation over whether compliance would be tied to commodity or crop insurance programs, and these additions seem to address this issue.