The efficiency of price discovery in the RINs market is quite controversial at the present moment. In just the last few weeks the New York Times published a lengthy piece strongly hinting that the RINs market was being exploited by Wall Street banks for ill-gotten gains and two U.S. Senators asked regulatory agencies to launch investigations. Senator Grassley of Iowa framed the issue this way, “The EPA needs to provide assurances that this market is functioning for its intended purpose, rather than acting as a profit mechanism for Wall Street banks and other financial institutions.” This specific issue was examined in two previous farmdoc daily posts (here and here). In these posts, it was shown that the price of D6 ethanol RINs had risen to a level that makes economic sense once one carefully works out the implications of the E10 blendwall and increased RFS mandates for the market equilibrium in ethanol. It was also shown that the pressure from a binding blendwall and increasing renewable (ethanol) mandates ultimately shows up in the price of biodiesel. While the analysis certainly did not prove that RINs prices always efficiently reflect market fundamentals (very difficult to do), there was nothing in the data that indicated obvious and glaring problems.

I begin by reviewing the conceptual model of biodiesel RINs pricing presented in a post last week. The model in Figure 1 assumes that biodiesel demand is perfectly elastic (horizontal) for biodiesel prices equal to (ultra low sulfur) diesel prices up to the technical limit on use. This reflects an assumption that biodiesel and diesel are perfect substitutes and that biodiesel is a small enough part of the diesel market that changes in the biodiesel price do not impact the overall demand for diesel fuel. One could go further and adjust biodiesel prices to reflect the lower energy content of biodiesel (about 12% lower) compared to petroleum diesel. However, given the low biodiesel blends typically used in the marketplace today, it is doubtful that this lower energy content is priced at the retail level. So, we assume no adjustment is necessary. Second, demand becomes perfectly inelastic (vertical) at an assumed B5 blendwall of 2 billion gallons. This assumption is based on EPA analysis in their 2013 RFS rulemaking, but it is disputed by some in the industry. Regardless, the analysis that follows is not affected by the blendwall assumption. It is used here to simply try to better reflect market realities in the model. Figure 1 implies that the 2013 RFS mandate of 1.28 billion gallons is highly binding. That is, the mandated quantity far exceeds the small amount of biodiesel that would be produced in the U.S. absent the RFS mandate (Q*). In order to get the higher than equilibrium quantity produced, biodiesel producers must be paid a price that is higher (Pbd) than the breakeven diesel price (Pulsd). From the perspective of a diesel blender, there is a wedge between the price paid to biodiesel producers and the price charged to consumers for the biodiesel in diesel blends. This wedge, or loss, is equal to the price of a D4 biodiesel RIN. 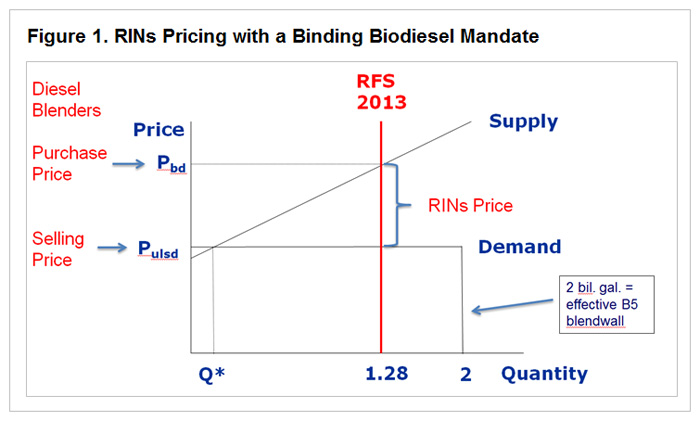 Strictly speaking, the model in Figure 1 predicts the “intrinsic” value of biodiesel RINs. In options market parlance, this refers to the immediate value of exercising an option. This is equivalent to the loss blenders would incur today by blending biodiesel, and it is represented by the blending margin. There is a second component of option value that is also relevant. This value is called “extrinsic” or “time” value and it reflects the value to an option owner of waiting until later to exercise the option when the intrinsic value may be even higher than it is today. Using the options analogy we can think of a RIN price as consisting of two components:

There are well-known option pricing models that can be used to estimate the time value of a RIN “option,” but, fortunately, this turns out not to be necessary for the present purposes. Since biodiesel prices are so much higher than diesel prices, even after adjusting for the blenders’ tax credit, the RINs can be considered “deep-in-the-money” and options of this type tend to have small time values.

With this background, the data on D4 biodiesel RINs prices can be examined. Figure 2 is an updated version of a figure presented in the July 19th post. It shows the biodiesel blending margin at the wholesale level in Chicago and D4 RINs price from September 3, 2009 through September 26, 2013. The biodiesel blending margin is normally computed as the price of ultra-low sulfur diesel minus the price of biodiesel plus the $1 biodiesel blenders’ tax credit when it is in effect. Here, the margin is multiplied by -1 to facilitate comparison to the market price of D4 RINs. We noted in the post on July 19th that there was a general correspondence between the movements of biodiesel blending margins and the D4 RINs prices but the correspondence was not exact. The same conclusion holds with the updated data. Closer inspection of the data reveals a curious pattern in the divergences between the two series–the blending margin exceeds the D4 price substantially in 2010 and 2012, but the two series track one another fairly closely in 2011 and 2013. Taken at face value the behavior of D4 prices in 2010 and 2012 appear to violate the pricing theory represented earlier in Figure 1. More specifically, the low RIN prices relative to blending margins in 2010 and 2012 seem to signal a large arbitrage opportunity whereby blenders could comply with the RFS biodiesel mandate by buying cheap RINs instead of engaging in the more expensive physical blending of biodiesel. In other words, why would anyone want to blend physical biodiesel in this situation? 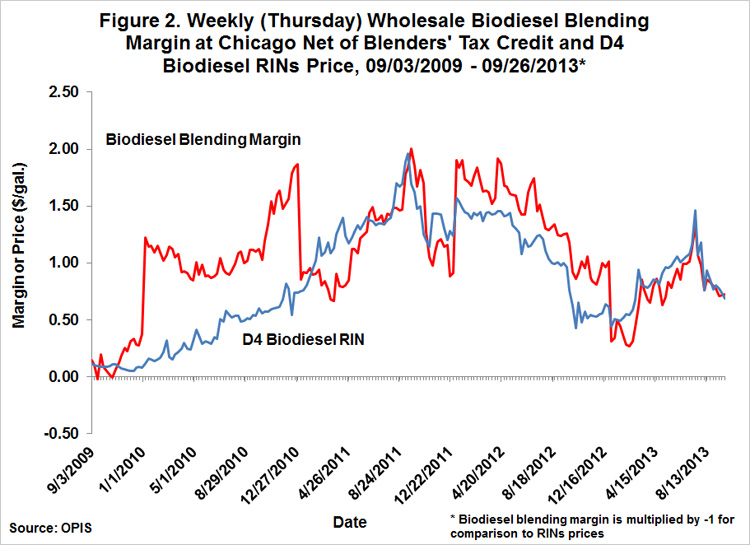 The answer to the question is found in the way the blenders’ tax credit has been reinstated through time. When the credit was restored for 2011 it was also retroactively applied to 2010 production, and the same thing happened with respect to 2012 production when the credit was restored for 2013. Traders in the secondary RINs market obviously anticipated the retroactive reinstatement of the blenders’ credit and calibrated D4 prices with that scenario in mind. Consider a particular date to make the point more concretely. On August 5, 2010, D4 RINs were trading at 53 cents per gallon and the blending margin (after multiplying by -1) was 99 cents per gallon. The low RINs price simply reflects the expectation of traders on this date that the credit for 2010 would be retroactively restored at a later point. In other words, it was rational to price RINs lower than the blending margin because traders knew there were reasonably high odds that the credit would eventually flow back to blenders.

The data in Figure 2 can be used to more precisely estimate the chance (probability) of retroactive reinstatement of the credit as perceived by RINs traders. Figure 3 shows the difference between the blending margin and D4 RINs price from September 3, 2009 through September 26, 2013. The average differences by calendar year are as follows:

Since the tax credit is $1, there is a convenient interpretation of the averages for 2010 and 2012. Assuming the average differences should be zero in equilibrium, the averages indicate the markets’ assessment of the probability that the tax credit will be reinstated retroactively for that year. This suggests that RINs traders thought there was about a 75 percent chance the credit would be retroactively reinstated in 2010 and this chance dropped to 28 percent in 2012. Inspection of Figure 3 reveals there was also considerable variation in the markets assessment of the probability of reinstatement within each year. For example, in 2010 the market estimated the probability near 100 percent early in the year, but it dropped to as low as 40 percent around mid-year, and then recovered back to near 100 percent by the end of the year. There was a particularly sharp recovery in the probability assessment during October 2010. Without going back and conducting a detailed review of the legislative prospects for the tax credit in 2010, it is easy to imagine that the probability (and therefore D4 RINs prices) closely tracked the ebb and flow of the political process. The key takeaway is that in both 2010 and 2012 biodiesel RINs traders were correct in assigning a positive probability to the possibility that the tax credit would be reinstated retroactively. 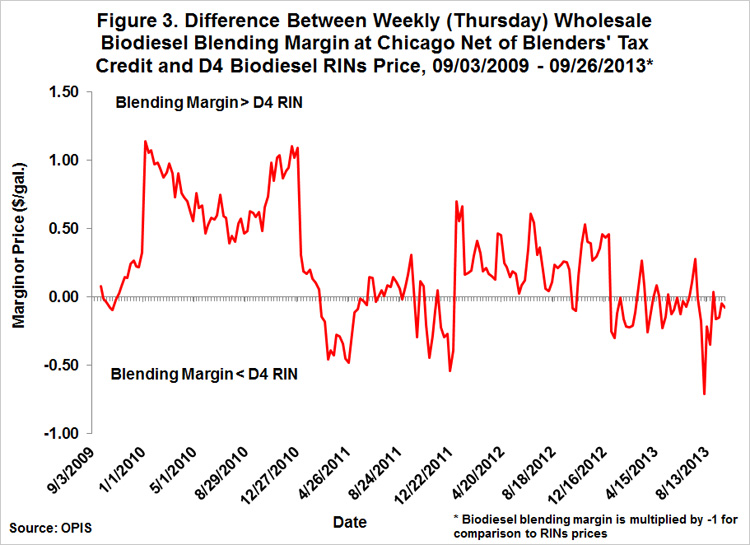 As a final point, note that the average differences for 2011 and 2013 are not zero, suggesting that the probability interpretations should only be used as a rough estimate. The averages in 2011 and 2013 may not be equal to zero due to: i) measurement of the blending margin at a particular location (Chicago) when the RINs prices are national averages; and/or ii) the RINs prices include time value components equal in magnitude to the averages.

Pricing in the RINs market is viewed with skepticism in some quarters. Analysis of data from the D4 biodiesel RINs market indicates that traders not only anchor prices to current blending margins as theory predicts, but also calibrate prices with an eye toward retroactive reinstatement of the blenders’ tax credit during periods when the credit has been suspended. This reinforces the conclusion in previous farmdoc daily posts (here and here) that the data do not reveal any glaring problems with the efficiency of price discovery in the RINs market. Furthermore, there is evidence that the RINs market anticipates even political outcomes with surprising accuracy.