This week, the EPA released final rules for the Renewable Fuel Standard in 2013 (summary fact sheet here). These rules establish the volume requirements and associated percentage standards used to enforce RFS2 compliance by obligated parties. The final rules differ from those in the proposed rulemaking released earlier in the year in that the 2013 cellulosic mandate is written down to just 6 million (compared with 14 million gallons in the proposed rules and 1 billion gallons in the original law). In addition, the end of the 2013 compliance period was extended from February 28 to June 30, 2014. The total advanced and renewable mandates remain at the levels originally outlined in the RFS – 2.75 billion gallons of advanced (which includes the 6 million gallons of cellulosic and 1.28 billion volumetric gallons of biodiesel) and 16.55 gallons of total renewable fuel (which includes the 2.75 billion gallons of advanced and 13.8 billion gallons of renewable biofuels). Finally, the final rulemaking includes discussion which looks ahead to next year, stating that the advanced and renewable mandates for 2014 could be adjusted to address E10 blendwall related challenges.

Despite a further reduction in the cellulosic mandate component, the EPA decided to leave the total advanced and renewable mandate levels unchanged for 2013. Of the 2.75 billion advanced gallons, 1.28 billion must come from biomass-based diesel (D4 RINs) along with the 6 million gallons of cellulosic (D3) RINs. After adjusting the volumetric biodiesel to ethanol equivalent gallons (1.28*1.5 = 1.92 billion gallons), this leaves an undifferentiated gap of 824 million gallons which could be filled with other advanced fuels (D5 RINs) such as sugar-cane ethanol or with additional gallons of biodiesel.

The EPA also left the total renewable mandate for 2013 at 16.55 billion gallons, meaning that 13.8 billion gallons (16.55 total less 2.75 advanced) of renewable biofuel (D6 RINs) will be needed. As with the undifferentiated advanced portion, this renewable portion of the mandate could be met with RINs from any type of advanced biofuel (i.e. D3, D4, or D5 RINs) in addition to the D6 RINs generated from corn-based ethanol. Table 1 reports original, proposed, and final mandate volumes for 2013 along with the resulting final percentage standards which obligated parties must meet to be in compliance. 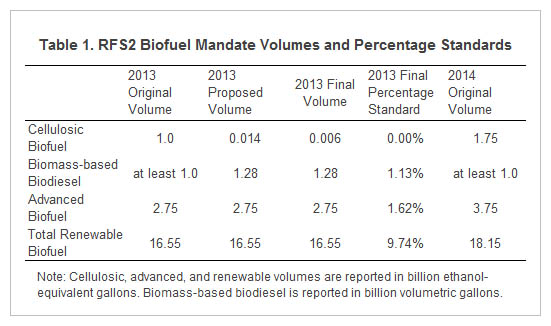 The arguably more interesting inclusion in the final set of 2013 rules was the discussion of the potential for reducing the advanced and/or total renewable mandate levels in 2014. Specifically, the final rule stated that “adjustments to the 2014 volume requirements are likely based on the projected circumstances for 2014, taking into account the available supply of cellulosic biofuel, the availability of advanced biofuel, the E10 blendwall, and current infrastructure and market-based limitations to the consumption of ethanol in gasoline-ethanol blends above E10.” This statement not only suggests the possibility for changes, but that reductions in the advanced and/or total mandate levels in 2014 are likely.

Attempting to guess what proposed rulemaking for 2014 might be continues to be highly speculative. However, based on the language in the final rules for 2013 it is possible to define a range of likely scenarios. The last column of table 1 reports the original volumes outlined in RFS2 for 2014.

The biodiesel mandate, stated to be at least 1 billion gallons moving forward, will likely not drop below the current level of 1.28 billion volumetric gallons. In the 2013 final rule, EPA also noted that actual biodiesel production capacity likely exceeds this level by 500 million ethanol equivalent gallons (0.333 billion volumetric gallons), thus it seems reasonable to expect the volumetric biodiesel mandate level falling in the range of 1.28 billion to 1.613 billion gallons for 2014. Note that this would result in RIN generation covering anywhere from 1.92 to 2.42 billion ethanol-equivalent gallons of the total mandate.

The gap between the total mandate and blendwall could of course be met with additional biodiesel blending, higher ethanol blend rates such as E85, or existing RIN stocks. However, the language in EPA’s final rule seems to imply that the barriers to higher blends are significant, and that RIN stocks remain the primary relief valve for obligated parties. A recent farmdoc daily post showed that just under 2.5 billion gallons of RIN stocks are currently available, but projected use this year will reduce carryover into 2014 by up to 1.1 billion gallons.

Two possible scenarios for 2014 are outlined below in table 2. Scenario 1 assumes the biodiesel mandate is held at the current level of 1.28 billion gallons while scenario 2 assumes that mandate is increased to 1.613 billion gallons based on the additional capacity that the EPA has estimated is currently available. Scenario 2 could be viewed as having the biodiesel mandate explicitly increased to this level, or as one where excess biodiesel RINs are generated for mandate compliance. Assuming 2014 RIN stocks of 1.4 billion gallons and a 13.4 billion gallon blendwall level for ethanol, scenarios 1 and 2 result in 1.43 and 0.93 billion gallons which will not be feasible for obligated parties to blend without increased blend rates such as E85. Thus, these values provide an indication of the potential amounts the EPA might reduce the advanced or total renewable mandate levels for 2014. 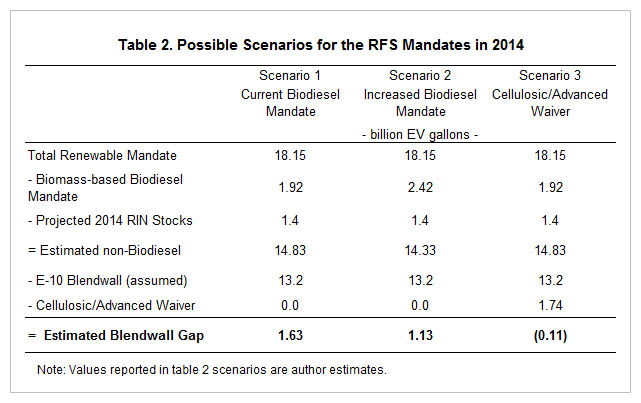 This would differ from the EPA’s approach to cellulosic waivers in the past where they have left the total advanced mandate at its original level, effectively increasing the undifferentiated advanced mandate. While it would provide a year of relief, the obligated parties and the fuel industry would still need to take steps towards being able to utilize higher blend rates for 2015 unless the EPA intends to continue providing waivers due to blendwall issues.

The more immediate impact of the EPA’s final rules for 2013 can be seen in recent RIN market activity. After reaching their peak above $1.40/gallon in July, RIN values for the D4, D5, and D6 categories have fallen, all with a marked decline on the August 6th release of the final rules. D6 RINs have once again fallen below $1.00/gallon. The decline in RIN values leading up to and following EPA’s statement regarding potential mandate waivers in 2014 illustrates the importance of the blendwall in terms of the cost of meeting the continually increasing RFS biofuel mandate levels.