As RIN prices began to surge this summer (here) and the realization of the saturation of the E10 market has become more apparent, attention has quickly turned to alternatives to “break through” the blend wall. These alternatives include increased sales of higher blends such as E85, increased use of biodiesel, and the use of available RIN stocks generated from blend levels exceeding mandate levels in previous periods. Analyses of available RIN stocks and trends in biodiesel production have been explored in recent posts (here, here, and here). Today’s post focuses on the potential for increased use of E85 by examining recent data on fuel prices and E85 sales from the state of MN.

The level of the total mandate less the biodiesel requirement relative to the E10 blend pool provides an estimate of the potential demand for ethanol used in higher blends such as E85. This year the total mandate of 16.55 billion gallons less the biodiesel mandate of 1.28 billion volumetric gallons (1.92 RIN gallons) implies about 14.63 billion gallons of potential ethanol use. With the estimated E10 blend wall at around 13.3 billion gallons, there is considerable room for E85 penetration into the fuel market.

However, the ability of the market to expand ethanol use beyond the blend wall seems to be limited in the short-term. Rising RIN prices, and the compression of those prices across the different classes of RINs, is a strong indication that the blend wall is the driving force. Due to the ability to bank and save RINs for future year’s compliance, the tightness of the blend wall next year also has a bearing on decisions made by obligated parties this year as they figure out the most cost-effective way to manage mandate compliance. Those management decisions and expectations are reflected in the price and sales of E85 as well as in the prices of RINs. Indeed those markets are intertwined in such a way that makes it difficult to discern how the current mandates are changing biofuel production and consumption behaviors versus how expectations of future mandates are changing those behaviors.

For example, whether the market brings in an additional gallon of biodiesel or an additional gallon of E85 is determined at the margin by which is easier or cheaper for blenders. While currently there exists a substantial incentive to increase production of biodiesel through the $1.00 biodiesel blender credit and favorable margins as well as high D4 RIN prices, it also appears that E85 is now being sold ‘below cost’ in some areas to provide incentives for consumers to purchase the higher blend.

Indeed, the Energy Information Administration (EIA) forecast in April that higher RIN prices should stimulate E85 sales by effectively discounting that fuel relative to E10. Prices for E85, relative to E10, have been falling as the D6 RIN price has risen in value in 2013. Because E85 has less energy content than E10, consumers should be willing to pay more for E10. More specifically, the price ratio at which E85 and E10 are priced at energy equivalence is approximately 0.77 (see additional discussion on the E85 energy equivalence value here). Thus, as E85 prices fall relative to E10 prices, we would expect to see sales of E85 increase. It is only recently that the price for E85 has been priced below its energy equivalence value for some regions of the country (here).

Yet, a ramp up in consumption of E85 seems to be taking place more slowly than market dynamics would suggest simply accounting for its energy value. From the supply side, perhaps it is the fact that current blend margins and the blenders’ credit is increasing the competitiveness of biodiesel in addressing the blend wall. From the demand side, issues beyond energy equivalence – such as the costs associated with the difficulty in finding E85 retailers and needing to refuel more often – may also play a role (for more discussion see this FAPRI report and this CARD working paper).

To investigate that latter point, consumer demand for flex fuels, like E85, can be examined where flex fuel vehicles and pumps are plentiful). In Brazil, consumers are quite responsive to the pricing of ethanol relative to gasoline (DOE/EIA workshop presentation). When gasoline is relatively expensive in terms of energy equivalence value, consumers turn toward higher blends of ethanol and vice versa. One would assume the same behavior would be observed for US consumers.

With E85 prices becoming more competitive with E10, we can use data from the Minnesota Department of Commerce to examine how sales volumes of E85 are impacted. Figure 1 provides a comparison of E85 sales prices to E85 sales volume at a number of retail fuel locations in MN for July 2013. The data suggests that E85 sales begin to increase as the sales price falls below the energy equivalence value for E10 (here this is approximately $2.70/gallon).

Note that the data points in Figure 1 represent individual station price levels and sales volumes for E85. Since sales volumes vary considerably, taking a simple average of the station-level prices will result in a different average price than taking a sales volume weighted average. That is to say a station with a less competitive E85 price which sells very few gallons counts equally in the simple average price calculation as an E85 station which is pricing below energy equivalence and selling much higher volumes. Not accounting for this effect during this time of transition in the E85 market may obscure the impact of the move by some stations to more competitively price E85, and the resulting response of consumers to such pricing. 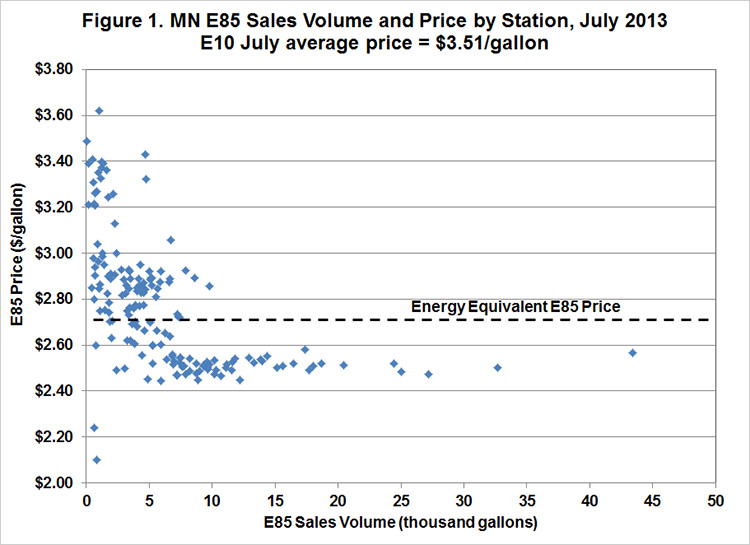 The simple average of the station-level prices reported in the MN data from January 2012 through August 2013 is $3.07, while an average price weighted by volume is $2.84. The volume weighted average price has fallen from above $3/gallon in the first quarter of 2012 to between $2.50 and $2.60/gallon in July and August 2013.The ratio of the volume weighted average E85 price at MN stations has fallen from 0.88 in early 2012 to around 0.7 since April 2013. This indicates that the average gallon is actually being sold slightly below energy equivalence, with many gallons being sold notably below energy equivalence.

Figure 2 plots total E85 sales volume at reporting MN retail stations along with the weighted E85/E10 price ratio, where the E85 average price is weighted by volume. E85 volumes have ranged from up to 800,000 gallons per month in 2012 to 400,000 gallons in early 2013 when the average E85/E10 price ratio increased above 0.9. Relative E85 prices have declined since February to near energy equivalence in July and sales volumes have rebounded to just over 1 million gallons in August. 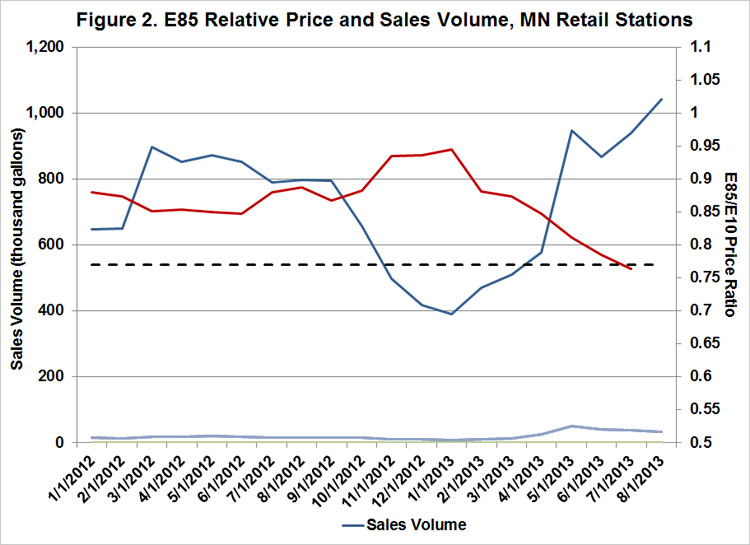 Figure 3 provides a similar story for a specific retail station in MN. The relative price of E85 at this specific station was relatively stable – 85% to 90% of E10 – throughout 2012 and sales volumes were stable at around 15,000 gallons per month. As the relative price of E85 has declined, falling below energy equivalence, sales volumes of E85 have increased rather dramatically to between 30,000 and 50,000 gallons per month. 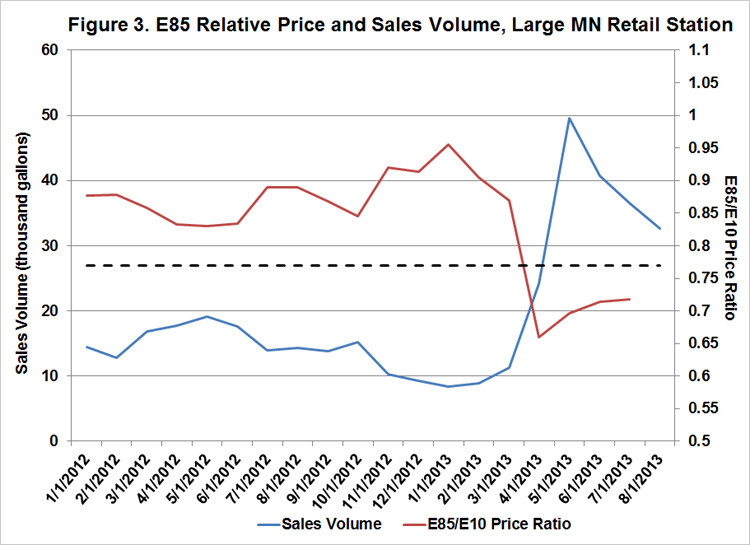 As D6 RIN prices have increased, so too have the incentives to blend and sell more E85. Anecdotal evidence suggests that US consumers are indeed responding to competitively priced E85 — prices have moved lower and volumes have increased. Data from E85 retailers in MN provides additional support. Individual retailers that have reduced the relative price of E85 to below energy equivalence with E10 have seen sales volumes increase substantially. Yet, recent total sales volumes of E85 in MN are only modestly higher than in early 2012 in Minnesota, despite a significantly more favorable price ratio based on data through July. It will be revealing to see if those trends continue.