The analysis below is based on data from the USDA’s Agricultural Resource Management Survey (ARMS). We limit our analysis to farms with over $250,000 in sales and farms for which the primary operator’s principal occupation is farming (or “farm businesses” in USDA nomenclature). We further limit our sample to farm businesses that specialized in field crop production, including: wheat, corn, soybeans, sorghum, rice, tobacco, cotton, peanuts, other cash grains, and oilseeds. In other words, we limit our analysis to farms that are most likely to participate in FCI. The survey respondents represent a population of approximately 228,000 farm businesses, and these farms can be further classified into three categories by acreage:

In 2011, roughly 92 percent of operating loan debt was held by field crop farm businesses that participated in FCI. Crop Insurance may specifically play a role in access to operating credit, especially in an environment of increasing farm expenses. Operating credit includes all production loans repaid within the last year, as well as all outstanding production loans. 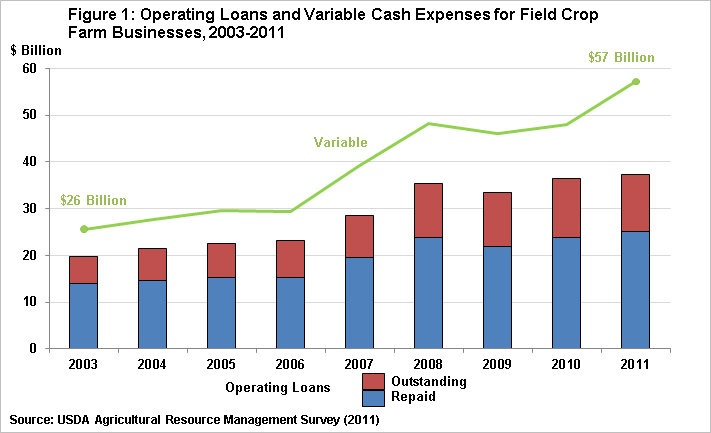 In general, field crop farm businesses have reacted to rising variable expenses by increasing operating loans, but farms that participate in FCI differ from those that do not participate. Given that farms with FCI hold a vast majority of operating debt, it is not surprising that operating debt amounts to more than half of variable expenses for FCI participants. For all field crop businesses with FCI coverage, operating loans equal on average, 64 percent of variables expenses compared to 30 percent for field crop farm businesses that do not have any acres covered by FCI. 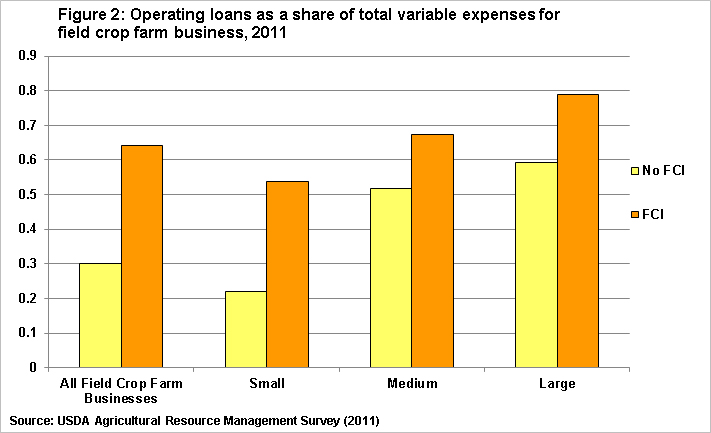 The views expressed are those of the authors and should not be attributed to ERS or the USDA.

Farm Debt Use by Farms with Crop Insurance http://www.choicesmagazine.org/choices-magazine/theme-articles/current-issues-in-risk-management-and-us-agricultural-policy/farm-debt-use-by-farms-with-crop-insurance