There is on-going speculation about the possibility of some adjustment in the EPA’s preliminary rule making for 2014 Renewable Fuel Standards (RFS), either in final rule making expected this summer or as a result of a legal challenge. A farmdoc daily post last week noted that the recent rise of D6 ethanol prices relative to D4 biodiesel prices indicates that RINs traders believe the odds of the EPA reversing the proposed write down of the renewable mandate for 2014 in final rulemaking have increased sharply.  The purpose of today’s post is to examine which biofuel– ethanol or biodiesel– would be the big winner if the EPA reverses itself on the write down of the renewable mandate for 2014.

We begin by briefly reviewing EPA rulemaking regarding the RFS.  The RFS statutes require the EPA to establish biofuel volume requirements in four categories: cellulosic biofuel, biomass-based diesel, total advanced biofuel (which includes biomass-based diesel), and renewable fuel (ethanol).  Of most interest for 2014 is the requirement for renewable fuel.  EPA preliminary rulemaking established that requirement at 13.01 billion gallons, compared to the 2013 requirement of 13.8 billion gallons and the statutory requirement for 2014 of 14.4 billion gallons.  The requirement was “rolled back” in recognition of the hurdles to blending quantities of renewable fuel in the domestic motor fuel supply beyond the E10 blend wall, variously estimated to be 13 to 13.2 billion gallons for 2014.  The proposal has been the subject of heated debate since it was released and the EPA received over 15,000 comments before the official comment period ended on January 28, 2014.  Biofuels groups have sent strong signals that they will mount a legal challenge if the final RFS rulemaking for 2014 includes the write down of the renewable mandate.

If the final EPA rulemaking for 2014 is revised to include renewable fuel quantities beyond the E10 blend wall, the additional requirements (referred to here as the “renewable fuel gap”) could be met with a combination of increased quantities of higher ethanol blends (E15 or E85) or increased blending of advanced biofuels (particularly biomass-based diesel).  For simplicity, we ignore the use of accumulated RINs stocks.  Obligated parties under the RFS will seek to minimize the cost of filling the renewable gap by judicious use of these alternatives. The least-cost combination will depend on the blending economics of each alternative. For example, if blending biodiesel with petroleum diesel at the margin involves a smaller loss than blending ethanol with gasoline to make E85 then obligated parties will choose to fill the renewable gap using biodiesel.

In the debate surrounding the EPA’s controversial proposed rulemaking for 2014, much of the focus has been on the potential role of E85 in meeting higher renewable mandate levels.  The issue boils down to the level of D6 ethanol RINs that would incentivize the needed rise in E85 deployment and consumption.  A positive D6 RINs price is necessary because E85 has to be priced low enough to compensate consumers for the lower gas mileage of E85 compared to E10 and the time value of more frequent refueling with E85.  In addition, blenders need to be compensated for any additional investment in the infrastructure needed to expand E85 use.  A recent study by Informa and another by Professors Bruce Babcock and Sebastian Pouliot of Iowa State University estimated the cost of increased deployment of E85 in terms of D6 RINs prices.  These studies suggest that a D6 RINs price of $0.75 per gallon is sufficient with E10 pump prices near $3.50 per gallon and the assumption that E85 pump prices would need to be 20 percent below the parity price with E10 to induce consumers to use higher quantities of E85.  Different assumptions about E10 prices, ethanol prices, discounts, and infrastructure costs will, of course, lead to different estimates of the required D6 price.  We use the $0.75 estimate as representative across a variety of market conditions and assumptions. 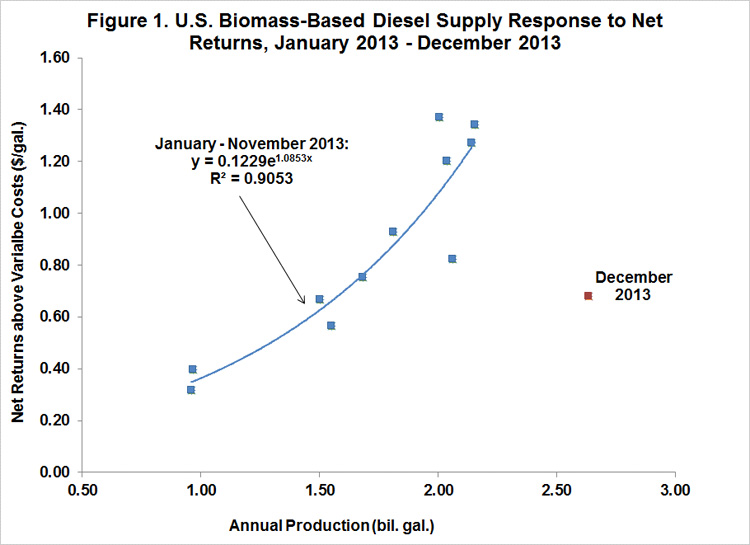 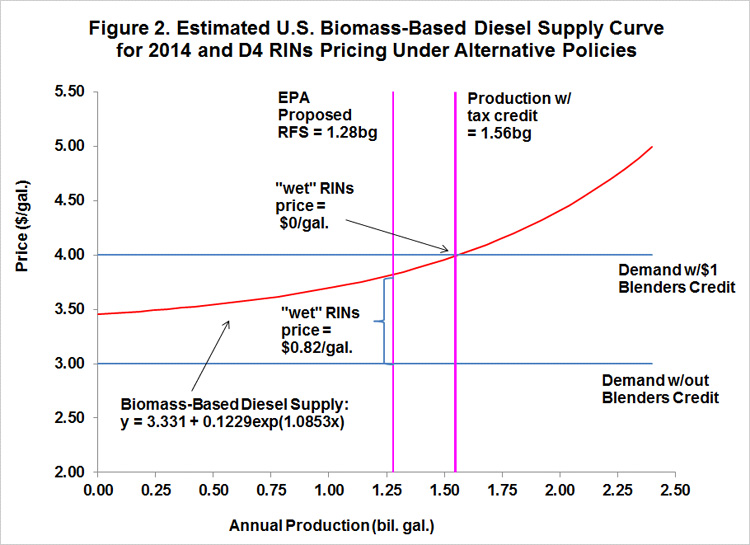 With the 2014 supply curve estimated, we only need to specify the biomass-based diesel demand curve to compute D4 RINs prices.  Under the assumption that biodiesel sells at the same price as ultra low sulfur diesel (ULSD) and there is no tax credit for biomass-based diesel, the demand curve in Figure 2 is horizontal at the price of ULSD, currently about $3.00 per gallon.  If the $1 per gallon tax credit is reinstated for 2014, the biodiesel demand curve is horizontal at $4.00 per gallon.  The intersections of the estimated supply and demand curves in Figure 2 yield the following results: 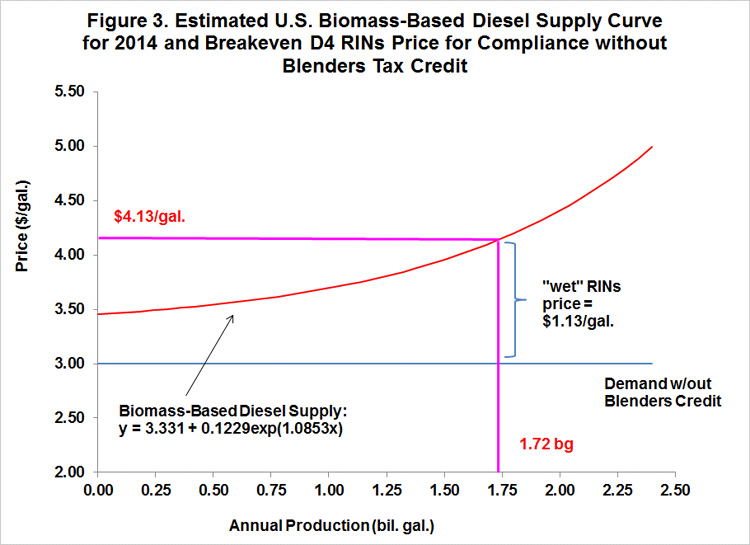 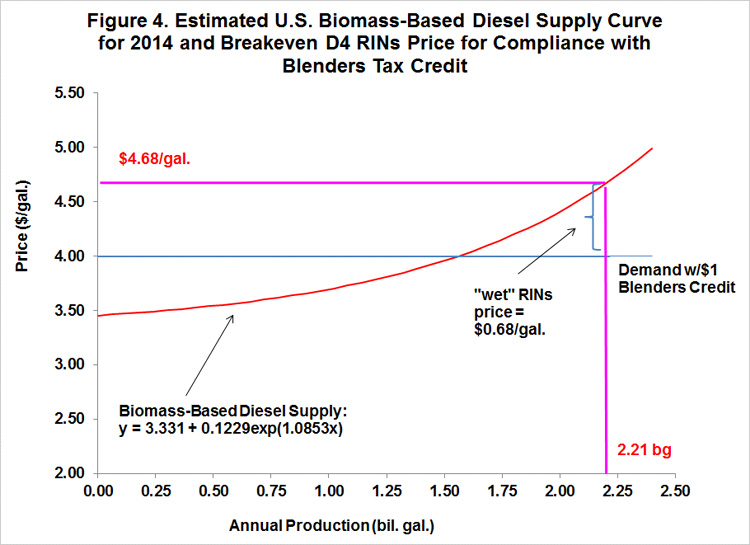 There is considerable uncertainty about the magnitude of the RFS biofuels mandates and the fate of the biomass-based diesel blenders tax credits for 2014.  However, there are some indications that at least the renewable fuels (ethanol) portion of the mandate may be increased from the preliminary quantity of 13.01 billion gallons in the EPA’s proposed rulemaking.  If that is the case, then the question becomes one of how the larger renewable mandate is met.  Part of any increase could be met with more E10 if motor fuel consumption grows.  Larger increases, however, would have to be met with some combination of higher ethanol blends, likely E85, and advanced biofuels, most likely biomass-based diesel.  It appears that many believe that the most likely pathway to meet a higher renewable mandate is with E85.  As a result, the most vocal advocates for an increase in the renewable mandate are in the ethanol industry.   While the outcome of the analysis presented here is subject to changes in the underlying market assumptions and the fate of the blenders tax credits, it certainly may be the case that the big winner from a reversal of the write down of the renewable fuels mandate for 2014 could actually be the biodiesel industry.