This is the fifth in a five part series on controlling costs on grain farms. Previous posts are available here, here, here, and here.

Corn and soybean prices in 2014 are projected to be much lower than prices between 2010 and 2012.  Non-land costs are not projected to come down by the same amounts as revenues have declined.  As a result, current projections place operator and farmland returns below average cash rents, leading to the need to reduce cash rents. 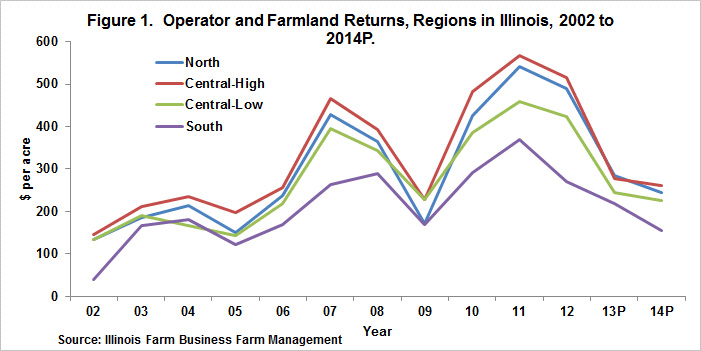 To a large extent, the cash rent increases that occurred from 2006 to 2013 period were justified.  Revenues had grown and returns in agriculture were high.  A portion of the higher returns needed to accrue to land owners, leading to higher cash rents.

The Current Situation:  A Dilemma? 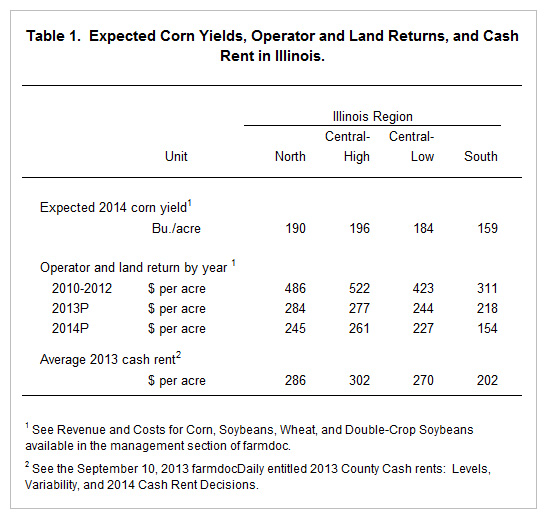 The 2014 projections are based on trend yields and a $4.00 per bushel corn price and an $11 per bushel soybean price.  Obviously, yields and prices can change between now and harvest.  All else being equal, higher prices would increase returns and lower prices would lower returns.  If prices are near those used for 2014 projections; however, losses will occur on farmland rented near average rents.

Many cash rents are set during the fall prior to the year of production. A critical time period will be this fall when 2015 cash rent levels are set.  If commodity prices are near those projected above during harvest time, 2015 commodity prices likely will be projected at levels near $4 per bushel for corn and $11 per bushel for soybeans.  In this case, there will be a need to adjust cash rents down for the 2015 production year.

There has been considerable debate on the speed with which cash rents will decrease in a lower return environment.  The general expectation is for a long adjustment process.  While rate adjustments are lagged in the farmland rental markets, there are several reasons to expect downward movements in 2015 cash rents.  First, there will be two years of marginal returns to grain production: 2013 and 2014.  These marginal returns will have reduced liquidity positions on many farms, leading to the need for cash rent reductions.  Second, guarantees on crop insurance products will be lower, leading to a higher risk position on farms.  Third, non-land costs likely will continue to be high, placing farms in a continuing high risk position.  For these three reasons, the downward adjustments could occur more quickly than expected.

In this post, a $4.00 corn price is used in making projections.  This is near the $3.95 price projected by the USDA at its Agricultural Outlook Forum; hence, the price expectations used here are near projections made by others.  Changes in commodity prices would change return projections.  For example, a $4.50 corn price and similar increase in soybean price would result an increase of $70 per acre in 2014 operator and land returns from those presented in Table 1 in northern Illinois.  This $70 increase would change the return projections, resulting in positive returns to farmers.  A $.50 higher corn price also would change rental outlook for 2015.

A large range in farmland returns is a characteristic of the current environment.  As corn prices from $3.50 and $5.50 per bushel are possible, swings of $200 or more in operator and land returns will over the next several years.  In this environment, it will be difficult for land owners not to bear some of the return declines.  Similarly, land owners will want to take part when higher returns occurs.  This risk sharing will require adjusting cash rents up or down based on price, cost, and yield expectations.  Those land owners willing to bear this risk likely will be rewarded with higher returns over time.

This series has addressed adjusting costs to a lower revenue environment.  A lower revenue environment will require re-evaluating input decisions and lowering capital purchases.  These reactions likely will not be enough to lower costs by the same magnitude as revenue declines.  As a result, cash rents will need to be adjusted down.  This will especially need to occur if $4.00 or lower corn prices persist over the several years.  At these price levels, current levels of average cash rents result in loses to farmers.