To begin, the terms “biodiesel”, “renewable diesel”, and “biomass-based diesel” need to be defined.  Biodiesel is a transportation fuel made from animal fats and vegetable oils by a process known as “transesterification.”   The fuel produced by this process has slightly less energy than petroleum diesel and its chemical properties are not exactly the same as petroleum diesel.  Biodiesel is almost exclusively blended with petroleum diesel; typically 2, 5, or 20 percent by volume.   Renewable diesel is also a transportation fuel made primarily from animal fats and vegetable oils, but by entirely different production processes compared to biodiesel.  One process is known as “hydrodeoxygenation,” whereby heat, pressure, and a catalyst are used to remove oxygen from the biomass feedstock.  An interesting feature of this process is that it is possible (but not necessary) to use existing petrochemical refining facilities.   The chemical properties of renewable diesel are indistinguishable from those of petroleum diesel, and therefore, renewable diesel can be used as a stand-alone transportation fuel or in blends with petroleum diesel.   Biomass-based diesel is generally defined as any form of biodiesel or renewable diesel.  A useful summary of the different types of biomass-based diesel from the National Renewable Energy Laboratory (NREL) can be found here.

With this background, the supply of biodiesel versus the supply of biomass-based diesel can be considered.  Figure 1 shows the available monthly data for these two variables since January 2011.  The red line represents domestic biofuel production based on a monthly survey administered by the EIA.  The survey is limited to domestic biodiesel plants that produce at least 20 percent of capacity during some point in a given year.  The blue line represents biomass-based diesel production and it is based on data collected by the EPA in its EMTS system for tracking RINs generation.  The following types of biofuels qualify for D4 RINs generation assuming the appropriate registrations are filed with the EPA: i) domestic biodiesel, ii) imported biodiesel, iii) domestic renewable diesel, and iv) imported renewable diesel.  This means that total D4 RINs generation reported in the EMTS system should represent the sum of these four categories.  While there have been widely-reported problems with the integrity of D4 RINs, this is still the best source of public data on total biomass-based diesel production for the U.S.  Note that “production” of biomass-based diesel for the present purposes includes both domestic production and imports. 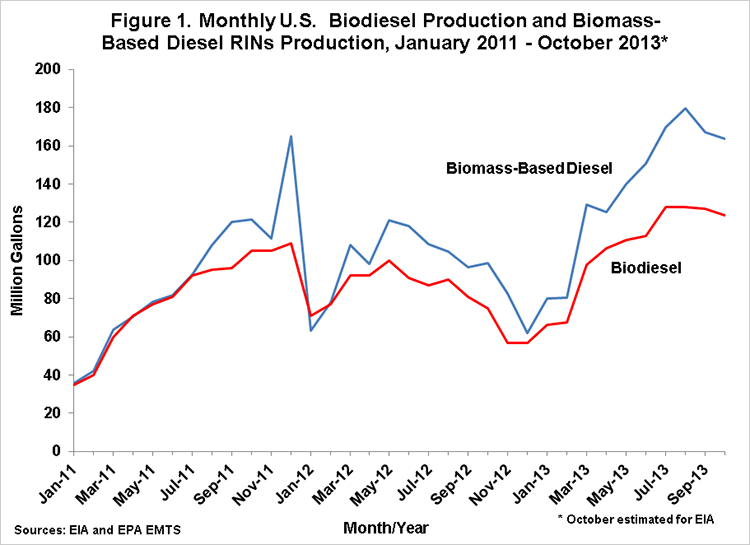 We can now proceed with estimating the supply curve for both biodiesel and total biomass-based diesel.  We again assume that 2013 observations provide the best data available for estimating short-run supply curves.  The reason is that market participants expect a non-negligible chance of the $1/gallon biodiesel and renewable diesel tax credits expiring at the end of the calendar year, so there is an obvious incentive for blenders to bid up the price of biomass-based diesels in order to increase production and take full advantage of the credit before it expires.  In essence, we argue that the unusual market circumstances in 2013 provide a unique opportunity to identify supply curves even with a seemingly binding RFS biodiesel mandate in place.

Figure 2 presents the relationship between net returns and production for domestic biodiesel and total biomass-based diesel over January – October 2013 (exp stands for “exponential”).  The net returns are once again the net production returns above variable costs based on a model of a representative Iowa biodiesel plant (see the post here).  The production volumes are the same as those presented in Figure 1, except the monthly volumes are annualized (monthly x 12).  It is important to emphasize that the relationships are estimated using data for only one feedstock (soybean oil), one production process (biodiesel), and one country (U.S.).  This could obviously introduce error into the estimates.  Despite these limitations the relationships fit the data quite well, with both regressions having an explanatory power (R2) of 95 percent. This is not as surprising as it may first appear since soybean oil is the most widely-used feedstock for biodiesel production in the U.S. and the price of the various fats and oils used as feedstock in biomass-based diesel production tend to be highly correlated (see Figure 5 in this post).  The high correlation implies that variation in the relative prices of fats and oils likely has only a minimal impact on supply relationships.  In essence, soybean oil can be viewed as an “index” for the price of all fats and oils used as feedstock in biomass-based diesel production. 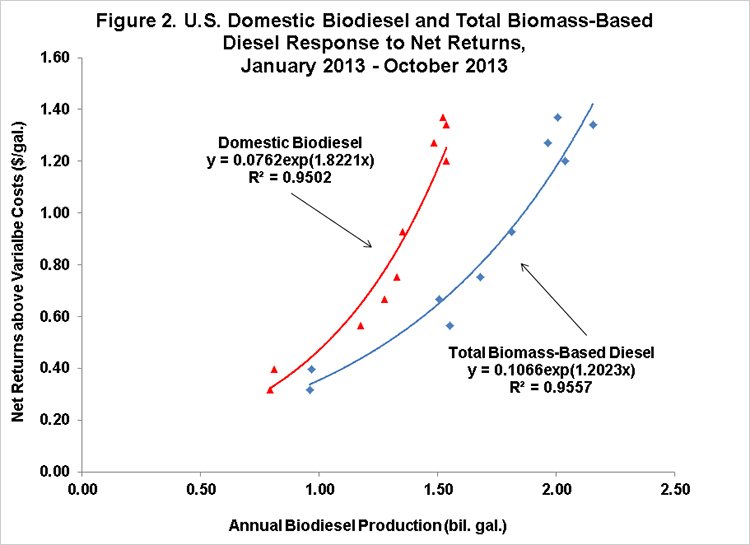 The final step of the analysis is to plot the curves in Figure 2 in terms of price on the y-axis instead of net returns.  This is accomplished by adding back to net returns all variable costs, including soybean oil, natural gas, and methanol costs, and subtracting glycerin revenue.  The average price per unit of these inputs for January – October 2013 is used in this step.  The resulting supply curves are shown in Figure 3.  Note that the only difference between the curves in Figures 2 and 3 is the re-scaling of the y-axis.  In addition, the supply curves are not drawn above 2.1 billion gallons in order to reflect the highest annualized level of monthly total biomass-based diesel production in 2013. 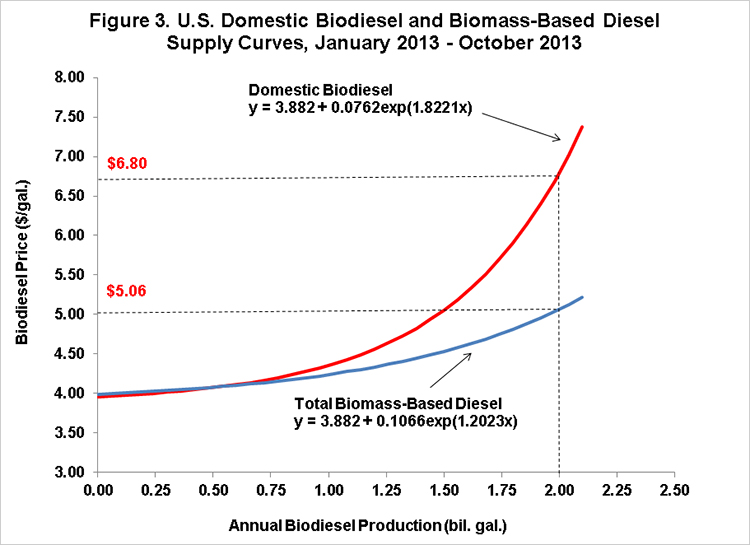 The estimated supply curves in Figure 3 are basically the same up to about one billion gallons of annual production but then diverge sharply for volumes above one billion gallons.  For example, the estimates imply that a price of $6.80 per gallon is required in order for biodiesel production to reach 2 billion gallons, while a price of only $5.06 per gallon is required for total biomass-based diesel to reach 2 billion gallons.  If costs and revenues per unit are approximately the same for biodiesel and renewable diesel, then one would expect the two supply curves to exhibit more of a parallel relationship because biodiesel is the largest component of total biomass-based diesel.  In that case, the total biomass-based diesel supply curve would simply represent the horizontal summation at a given price of the biodiesel supply curve and the supply curves for the other three components of the total.  The estimation results seem to imply that there are greater economies of scale to renewable diesel production.  While this could be the case, an alternative explanation is that new renewable diesel production capacity came on line in 2013 and this skewed the results given the short sample period used to estimate the supply curves (10 months).   Unfortunately, we may have to wait for another year in which the tax credit is set to expire in order to expand the sample in a meaningful way.