The EPA announced preliminary RFS rulemaking for 2014 on November 15, 2013, and the proposal signaled a significant shift in EPA policy.   The most surprising and controversial aspect of the proposal was a write down of the renewable (ethanol) mandate from 14.4 to 13 billion gallons.  The proposal has been the subject of heated debate since it was released and the EPA received over 15,000 comments before the official comment period ended on January 28, 2014.  Biofuels groups have sent strong signals that they will mount a legal challenge if the final RFS rulemaking for 2014 includes the write down of the renewable mandate.  Previous farmdoc daily posts have examined the implications for grain, biofuel, and RINs markets of alternative scenarios for implementation of 2014 RFS rules (see the posts here, here, and here).  The purpose of today’s post is to show that the recent behavior of prices in the RINs market suggests the odds of the EPA reversing the proposed write down of the renewable mandate for 2014 in final rulemaking have increased sharply.

In order to understand the message from the RINs markets, we need to review a conceptual model of ethanol RINs pricing that has been used in several previous posts (for example, here and here).  The version presented in Figure 1 is a general representation.  The demand curve is assumed to be vertical (perfectly inelastic) at 5 billion gallons in order to represent the demand for ethanol as an MTBE oxygenate replacement. It is vertical since non-ethanol alternatives are prohibitively expensive. The demand curve then becomes flat (perfectly elastic) for ethanol prices equal to 110 percent of CBOB gasoline prices between 5 and 13 billion gallons. This breakeven point reflects Department of Energy research on the value of ethanol as an octane enhancer in gasoline blends. The demand curve becomes vertical again to reflect the E10 blend wall, which is assumed here to be 13 billion gallons.  The intersection of market supply and demand in this case results in an equilibrium quantity of 13 billion gallons, equal to the E10 blendwall. 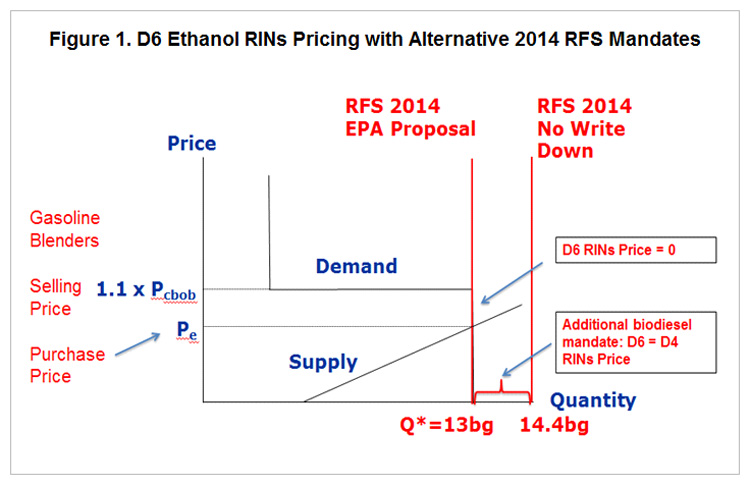 An interesting implication of the model presented in Figure 1 is that eliminating the RFS renewable mandate entirely would not impact the amount of ethanol consumed in the U.S.  The reason is that it is profitable for gasoline blenders to blend ethanol with gasoline at least up to 10 percent blends.  For the same reason, the model predicts that the price of an ethanol RIN is zero up to the E10 blend wall of 13 billion gallons.  The situation is quite different if the renewable mandate is set above the E10 blend wall.  For example, the statutory mandate for 2014 is 14.4 billion gallons, which results in a “renewable gap” of 1.4 billion gallons (14.4 – 13).  If one is willing to assume that higher ethanol blends, such as E85, cannot be deployed in large quantities in the short-run, then the renewable gap effectively becomes additional biodiesel mandate (see the analysis here).  In this model the only way to fill the gap and fully comply with the renewable mandate is by blending biodiesel, which is a higher nested biofuel in terms of RFS compliance.  Under this circumstance the price of a D6 ethanol RINs equals the price of a D4 biodiesel RINs.

The model presented in Figure 1 predicts interesting dynamics with regard to D6 ethanol RINs prices.  For RFS renewable mandate levels less than or equal to 13 billion gallons, the D6 price is zero.  Using an options market analogy, the “intrinsic” value of the D6 RINs is zero and the “option” is “out-of-the-money” because the ethanol blending margin is positive.  The D6 may still have a small positive “time” value to reflect the chance that blending margins at some point in the future could turn negative.  However, as shown in Figure 1, if the RFS renewable mandate exceeds 13 billion gallons the D6 RINs price switches to being determined by the D4 RINs price because of the renewable gap.  Figure 2, which is reproduced from this earlier post, provides compelling evidence that RINs pricing dynamics played out as predicted by the conceptual model during 2012-2013.  D6 prices were very close to zero through 2012, consistent with positive ethanol blending margins, but once the calendar turned to 2013 and the RFS renewable mandate exceeded the E10 blend wall, D6 prices rose (spectacularly) to the level of D4 prices.  Then, the entire process began a dramatic reversal in late July 2013, with D4 and D6 RINs de-coupling and D6 prices dropping sharply.   I argued in an earlier post that the best explanation was that some RINs traders either had a remarkable ability to forecast EPA policy decisions or had access to EPA policy deliberations before the general public.  As noted above, the EPA did subsequently propose a write down of the renewable mandate back to the level of the E10 blend wall in late November 2013.  The decoupling of D6 and D4 RINs prices and the move to sharply lower D6 RINs prices that started in late July 2013 is exactly what the conceptual model in Figure 1 predicts should happen with this type of policy change. 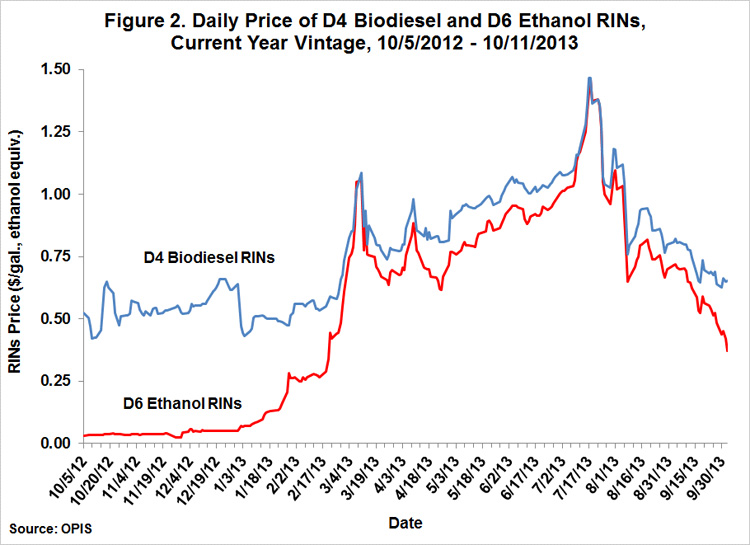 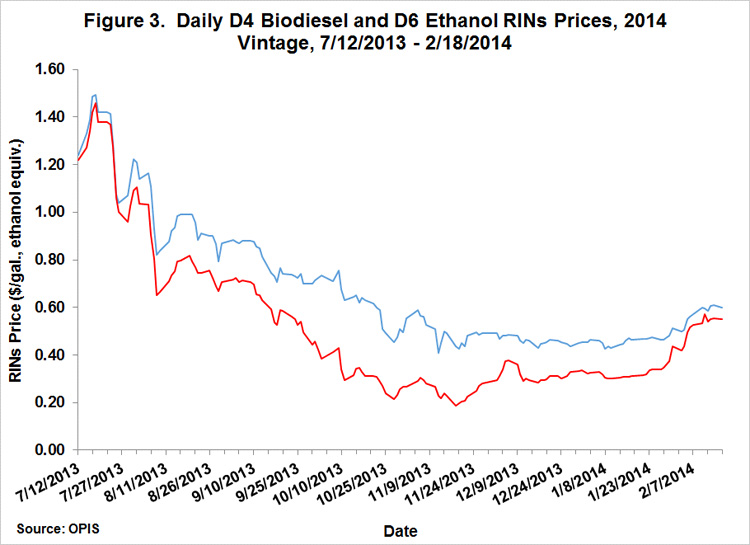 The entire story of the coupling and uncoupling of D4 and D6 RINs in the last year is nicely illustrated in this chart.  In early July 2013 D4 and D6 prices were fully coupled, reflecting the market expectation discussed above that the 2014 renewable mandate would exceed the E10 blend wall.  Then, in late July 2013 D4 and D6 prices uncoupled, reflecting the changed market expectation, subsequently proved correct, that the EPA would write down the 2014 renewable mandate so it would not exceed the E10 blend wall.  Since late January 2014 D6 prices have once again risen rapidly relative to D4 prices.  The price of a D4 and a D6 with 2014 vintages stood at $0.46 and $0.34, respectively, on January 27, 2014, little changed since early December 2013.   Six trading days later on February 5 the price of a D4 and D6 had risen to $0.55 and $0.50, respectively.  In other words, the price of D6 RINs increased by about 50 percent over a span of just six days!  Obviously, something dramatic must have happened to change the market’s perception of the value of D6 RINs relative to D4 RINs.  The conceptual model presented in Figure 1 strongly suggests that RINs market traders were convinced there is a much higher chance that the EPA will reverse the write down of the 2014 renewable mandate in final rulemaking, expected to be released in late spring or early summer.  As long as the reversal of policy results in a renewable mandate for 2014 that exceeds the total capacity of the domestic fuel market to physically absorb the mandated quantity of ethanol, then D4 biodiesel and D6 ethanol prices should be effectively re-coupled.  So, the reversal does not need to be complete for the switch to be flipped.  For example, if the domestic fuel market can absorb 13.4 billion gallons of E10 and E85 in 2014, a renewable mandate of 13.8 billion gallons for 2014 would have a similar price impact in the RINs market as the statutory mandate level of 14.4 billion gallons.

There is one other logical possibility that could explain the re-coupling of D4 and D6 RINs prices in 2014.  Traders could have perceived a much higher chance that biofuels groups would be successful in challenging the renewable write down in court.  From the perspective of the economic model in Figure 1, this would have the same impact as an EPA reversal.  However, this seems very unlikely given that little if any information has emerged that would change perceptions regarding the likely success of such a court challenge.

One final issue is the differential implication of potential increases in the advanced mandate vs. the renewable mandate.  If only the advanced mandate is increased in the final rulemaking this could result in higher biodiesel prices that have the effect of driving up D4 prices, but this should not impact the price of D6 ethanol RINs because the renewable gap is unaffected (remains at zero).  The coupling of D4 and D6 RINs prices is driven by the renewable gap and this is what allows us to infer that traders have changed their expectations about EPA final rulemaking for 2014

Once again, the RINs market may be providing an early warning signal about a change in EPA policy.  The recent rise of D6 ethanol prices relative to D4 biodiesel prices indicates that RINs traders believe the odds of the EPA reversing the proposed write down of the renewable mandate for 2014 in final rulemaking have increased sharply.  Interestingly, not much has been reported in the press that would support such a dramatic shift in expectations.  It was reported on February 3rd that the Administrator of the EPA, Gina McCarthy made the following statement at the meeting of the National Association of State Departments of Agriculture, “I have heard loud and clear that you don’t think we hit that right…[the final rule will be] in a shape that you will see that we have listened to your comments.”  It’s hard to parse from that statement alone that the EPA is on the verge of reversing itself.  Nonetheless, the recent track record of the RINs market in signaling changes in EPA policy is quite impressive and one should not easily dismiss the latest signals as a result.