The Environmental Protection Agency (EPA) proposed method to reset biofuel requirements annually based on expected use implies different mechanics for the Renewable Fuel Standard (RFS) in the future. The new mandate setting could be described as ‘adding-up’ the market potential for E10 and E85 ethanol, biodiesel and other non-ethanol fuels. The proposed “Add-Up” method implies that our understanding of how a blender’s tax credit affects markets must change, for example. A tax credit, such as the biodiesel blender’s credit, that encourages biofuel use would mean higher expected use, so the requirement would be raised in current or subsequent years. Instead of making the RFS easier to meet, a blender’s tax credit might just increase the size of the Add-Up RFS.

In its proposed rule for the 2014 RFS, EPA announced a plan to waive a portion of the RFS from 2014 on, a notable break from previous proposals. The Energy Independence and Security Act (EISA) set out fixed minimum volumes of biofuel use in each year. The EISA had four mandates, with the overall including all types of qualifying biofuels, the advanced requirement for biofuels with higher GHG emission reductions, and the biomass-based diesel and cellulosic mandates targeting types of advanced biofuels. In this hierarchy, extra biomass-based diesel can help to meet the advanced or overall requirement, displacing ethanol, but other advanced or conventional biofuels cannot help to meet the biomass-based diesel requirement.

The EPA proposal maintains the hierarchy, but replaces the set targets of the EISA with annual estimates of how much renewable fuel use is ‘expected’ (Figure 1). The Add-Up method sets the biomass-based diesel requirement at the higher of a base level of 1.28 billion gallons or expected use. The cellulosic requirement is set at anticipated production or use. Advanced is the sum biomass-based diesel and cellulosic requirements, plus any non-ethanol advanced biofuels. The overall requirement is the sum of advanced requirement and whatever amount of ethanol use is expected in E10 and higher level blends. One implication of the proposed Add-Up method is that the volume that could have been met with advanced and conventional ethanol under EISA (14.48 billion gallons) is replaced with a lower value based on expected use (13.34 billion gallons). Higher expectations of E85 use would appear to lead directly to a larger mandate. Higher RIN prices would appear to lead to additional E85 consumption would then potentially lead to greater future mandates.

A blender’s tax credit, such as the $1.00 per gallon credit given to biodiesel blenders which expired at the end of 2013, gives an incentive to blenders to use more biofuel. The potential for reinstatement of the blender’s credit was discussed on here. Under the EPA’s previous method, the credit may simply make the mandate less costly to achieve. The tax credit for each gallon of biodiesel blended would tend to make D4 RIN prices lower. If the RFS was then easy to exceed or if obligated parties wanted extra RINs to carry into the next year, biodiesel use might rise but perhaps not very much. If extra biomass-based diesel was used beyond its own requirement, then it might displace ethanol used for advanced or overall requirements.

The proposed Add-Up method could change this story dramatically. If a tax credit makes biodiesel less expensive and broadens use, then the biomass-based diesel requirement might be increased in current or subsequent years under the Add-Up method. This is in contrast to the previous method, in which a tax credit simply made a fixed quantity less expensive to achieve. Any increase would be added to the broader advanced and overall requirements, too, so ethanol would not be displaced. Instead of making the RFS easier to meet, the tax credit could lead to a greater requirement. In practice, the blenders’ credits and expanded mandates could largely offset each other, so RIN prices would be unchanged. However, we have yet to see how the Add-Up would actually work in practice.

What would happen if the biodiesel tax credit had not expired (or is reinstated) and the Add-Up method is adopted? Less costly biodiesel use might mean larger biomass-based diesel, advanced, and overall requirements. Perhaps the D4 RIN price would fall if there is still difficulty to meet the 1.28 billion gallon lower bound for this requirement. However, beyond that number, any further increase in biomass-based diesel use is cause to increase the broader requirements in the Add-Up. Under the Add-Up, factors which increase use, such as blenders’ credits, could then also increase the use of feedstocks in the production of biofuels, increasing commodity prices.

The EPA proposal is largely silent with respect to the available stocks of RINs that could be used for the proposed 2014 mandates and mandates in 2013 were met in part through a draw down in RIN stocks as discussed on here. The proposed Add-Up method appears to be neutral with respect to RIN stocks, not accounting for their availability in determining proposed mandate quantities. D4 RIN stocks were quite large at the start of 2014, and those RINs will likely be used to help comply with the 2014 biodiesel mandate, but the available quantities are larger than can be used just for biodiesel compliance. This possibility is ignored in the Add-Up method. How to calculate the increase in biomass-based diesel use is not so clear in the event the biodiesel tax credit is continued.

An extension of the biodiesel tax credit would reduce the need to draw down D4 RIN stocks to meet the RFS requirement (Figure 2). When setting the broader requirements, however, the EPA’s stock-neutral approach does not capture the full increase in biomass-based diesel use and thus may under-estimate the true use that is likely to occur in the event of a biodiesel blender’s credit extension. 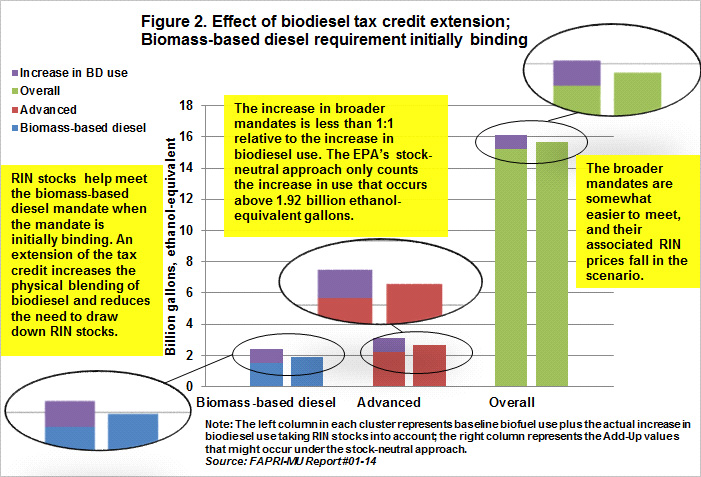 Past analysis of biofuel markets and the impact of blenders’ credits on biofuel use assumed fixed mandates and that might now appear incorrect if the Add-Up method is adopted by EPA. A blender’s tax credit might still have some impacts on RIN prices, but there are more implications for total biofuel use in the Add-Up relative to the EISA. This impact can be extended more broadly, in that factors which make biofuel use more attractive in a given year, such as lower feedstock prices (corn and soybean oil) or higher petroleum prices, could result in higher mandates in subsequent years. Similarly, mandates which result in high RIN prices, and thus increased ethanol blending in products such as E85 could result in greater mandates to accommodate the expected use in subsequent years. Thus mandate choices today may have a direct impact on future mandate levels. Responses to other shocks might also differ between EISA and Add-Up.

Under the proposed Add-Up method, the RFS renewable fuel requirements will respond to market conditions and other policies, not remain at set EISA targets.