A farmdoc daily post yesterday explored D4 biodiesel RINs pricing in light of uncertainty about the outcome of EPA rulemaking for 2014 and the status of the blenders tax credit in 2014. The analysis showed that the recent decline in time value for D4 RINs was equivalent to assuming there is about a 90 percent chance that a future court ruling will not overturn the EPA’s proposed write down of the renewable mandate for 2014 and about a 90 percent chance that the blenders tax credit will be extended for 2014. It was observed that these probabilities appeared to be on the optimistic side. The purpose of today’s post is to apply a similar analysis to the current pricing of D6 ethanol RINs.

I begin by reviewing a conceptual model of ethanol RINs pricing that has been used in several previous posts (for example, here and here). The version presented in Figure 1 is a general representation. The demand curve is assumed to be vertical (perfectly inelastic) at 5 billion gallons in order to represent the demand for ethanol as an MTBE oxygenate replacement. It is vertical since non-ethanol alternatives are prohibitively expensive. The demand curve then becomes flat (perfectly elastic) for ethanol prices equal to 110 percent of CBOB gasoline prices between 5 and 13 billion gallons. This breakeven point reflects Department of Energy research on the value of ethanol as an octane enhancer in gasoline blends. The demand curve becomes vertical again to reflect the E10 blendwall, which is assumed here to be 13 billion gallons. Without an RFS mandate, the equilibrium quantity (Q*) is given by the intersection of the demand and supply curves. Now, consider the case of a binding RFS mandate (QM). The mandate is binding because the mandated quantity exceeds the amount of ethanol that would be produced absent the RFS mandate. In order to get the higher than equilibrium quantity produced, ethanol producers must be paid a price that is higher (Pe) than the breakeven ethanol price (1.1 x Pcbob). From the perspective of a gasoline blender, there is a wedge between the price paid to ethanol producers and the value of the ethanol in gasoline blends. This wedge, or loss, is the ethanol price minus the breakeven ethanol price at the mandated quantity, which also equals the price of a D6 ethanol RINs. 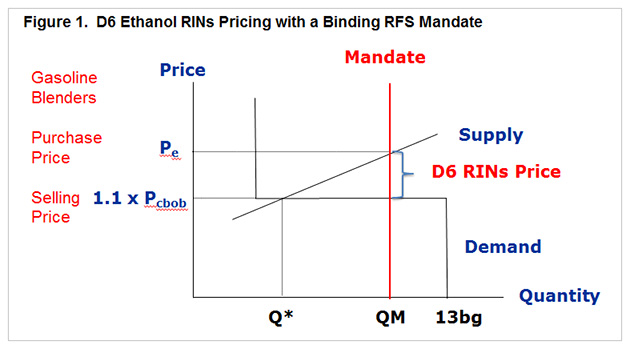 Figure 2 presents the same conceptual model with some modifications to better reflect conditions in the ethanol and gasoline markets in recent years as well as alternative RFS renewable mandate levels for 2014. The intersection of market supply and demand in this case results in an equilibrium quantity of 13 billion gallons, equal to the E10 blendwall, and an ethanol purchasing price (Pe) for blenders below the breakeven value of the ethanol (1.1 x Pcbob) in gasoline blends. Because the blending margin for ethanol is positive the price of a D6 ethanol RINs is zero. Recalling Figure 1, a D6 RINs will only have a positive value if the blending margin is negative. Now consider the impact of the two alternative RFS renewable mandates for 2014. If the mandate is 13 billion gallons, as proposed in the recently leaked EPA rules, then the mandate is technically non-binding and D6 ethanol RINs will still have a zero value. However, if the mandate is 14.4 billion gallons, as given in the RFS2 statutes, the “renewable gap” of 1.4 billion gallons (14.4 – 13) effectively becomes an additional biodiesel mandate (see the analysis here) and the price of D6 ethanol RINs equals the price of D4 biodiesel RINs. 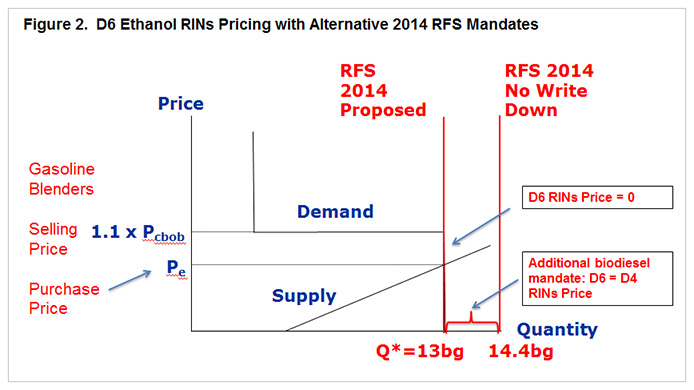 The model presented in Figure 2 predicts an interesting dynamics with regard to D6 ethanol RINs prices. For RFS renewable mandate levels less than or equal to 13 billion gallons, the D6 price is zero. Using an options market analogy, the “intrinsic” value of the D6 RINs is zero and the “option” is “out-of-the-money” because the ethanol blending margin is positive. The D6 may still have a small positive “time” value to reflect the chance that blending margins at some point in the future could turn negative. Figure 3 demonstrates that blending margins for ethanol since 2008 have indeed been positive with the exception of a few brief periods. Note that the blending margin in Figure 3 is computed as: 1.1 x CBOB price – ethanol price. It is especially interesting to observe that blending margins have remained strongly positive throughout 2013, which would seem to imply D6 RINs prices near zero. However, as shown in Figure 2, if the RFS renewable mandate exceeds 13 billion gallons the D6 RINs price switches to being determined by the D4 RINs price because there is a gap between the RFS renewable mandate and the E10 blendwall. In this model the only way to fill the gap and fully comply with the renewable mandate is by blending biodiesel, which is a higher nested biofuel in terms of RFS compliance. Figure 4 provides compelling evidence that these dynamics have played out as predicted in RINs markets during 2013. D6 prices were very close to zero through 2012, consistent with positive ethanol blending margins, but once the calendar turned to 2013 and the RFS renewable mandate exceeded the E10 blendwall, D6 prices rose (spectacularly) to the level of D4 prices. Of course, the precipitous decline in both D6 and D4 RINs prices since last summer is equally interesting. A recent post explores what may have been behind the plunge. The question I will explore in the remainder of today’s post is whether the decline was possibly overdone. 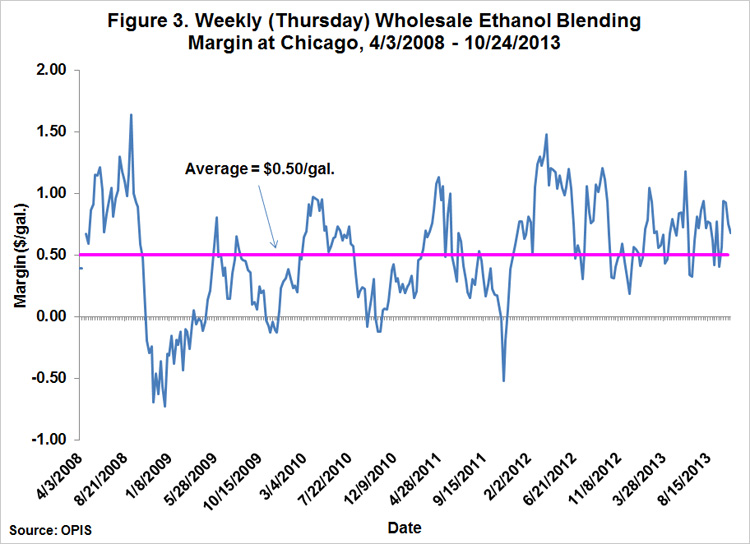 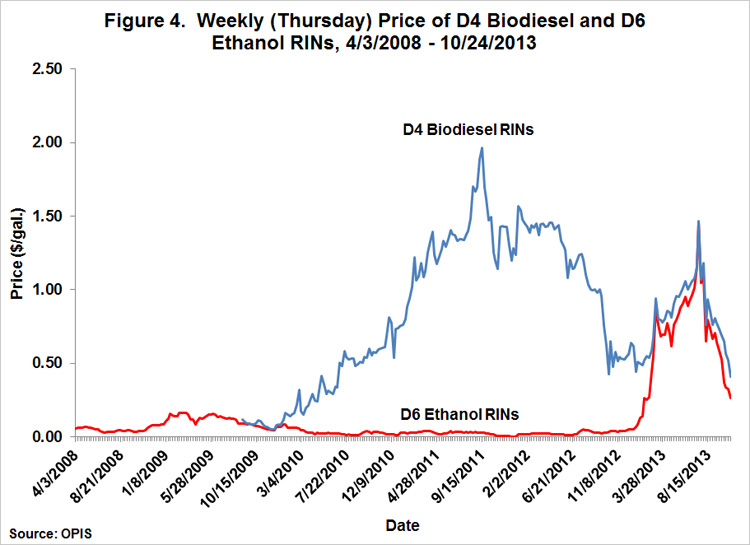 The previous analysis indicates there is a binary nature to the valuation of D6 ethanol RINs. If the EPA goes ahead with the proposal to write down the renewable mandate from 14.4 to 13 billion gallons in 2014 and that rulemaking survives a challenge in court by biofuels groups, then the intrinsic value of a D6 RINs is zero. However, if a court eventually overturns the EPA rulemaking, then the value of a D6 RINs would be determined by the value of a D4 biodiesel RINs. To further complicate matters, D4 RINs values are directly related to whether the blenders tax credit is extended for 2014. Fortunately, we can use the same 2 x 2 joint probability approach as we did yesterday for biodiesel to work through the different scenarios and project ethanol RINs prices.

The table below uses the same equal probability starting point as in yesterday’s post:

The rows in the left panel represent the two possible outcomes of a court ruling on the 2014 EPA rules, yes they are upheld or no they are struck down. The columns represent the two possible outcomes for extension of the blenders tax credit to 2014, yes it is extended and no it is not extended. The four innermost cells in the left panel represent the four possible joint outcomes. For example, the upper-left cell represents the outcome of a court upholding the 2014 rules and an extension of the tax credit for 2014. Since the court and tax credit decisions can reasonably be assumed to be independent events, the joint probabilities for the four combinations of outcomes are found by simply cross-multiplying the relevant yes/no probabilities for each cell. Since the yes/no probabilities are all assumed in this example to be 0.5, the joint probabilities are all 0.25 (0.5 x 0.5). The intrinsic values in the first row of the right panel are zero to reflect scenarios where the 2014 EPA rules are upheld and the intrinsic values in the second row assume the court ruling is overturned, which implies that D6 RINs are valued as D4 RINs. The intrinsic values in the second row are the same as those used to value biodiesel RINs yesterday and correspond to a total RFS biodiesel mandate of 2.21 billion gallons in Figure 5 (re-presented from yesterday’s post). By multiplying the joint probabilities by the payoffs we can determine the “actuarially fair” price for a D6 RINs today:

This set of assumptions predicts a D4 RINs price of $0.72 per gallon, which can be compared to D6 RINs prices actually traded in the market in recent days, in the range of $0.22 to $0.26 per gallon. The calculated price is about three times the prices that have been trading in the market, similar to what was found yesterday for D4 RINs. 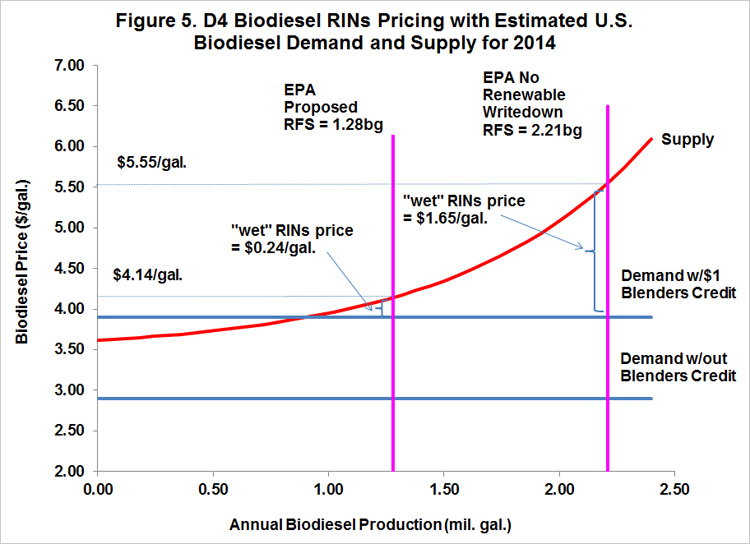 So, an 80/20 split of the probabilities generates D6 prices close to those currently traded in the market. That is in the ballpark of the 90/10 split for biodiesel that was required to equate calculated and market D4 RINs prices in yesterday’s post. Once again, this has the appearance of being potentially over-confident about the chances for the different outcomes and suggests the possibility that the decline in D6 RINs prices since last summer may be in store for a bit of a correction.
One final issue that deserves attention is the possibility that E85 could be used to fill the renewable gap instead of biodiesel. There has been a good deal of discussion of this issue (see posts here and here for examples) and a clear consensus on the feasibility of E85 filling this role in the short-run has yet to emerge. Work by Professor Bruce Babcock at Iowa State University indicates that even if this is feasible, D6 RINs prices in 2014 would have to be about $1.00 to $1.50 per gallon to incentivize substantially increased E85 deployment. This is in the same range as the biodiesel intrinsic values used here, so assuming that the renewable gap in 2014 is filled by E85 instead of biodiesel would result in similar projections of D6 RINs prices.

The dynamics of D6 ethanol RINs pricing are quite interesting. For RFS renewable mandate levels less than or equal to 13 billion gallons the D6 price is near zero because the ethanol blending margin is positive. However, if the RFS renewable mandate exceeds 13 billion gallons, the D6 RINs price is determined by the D4 RINs price because there is a gap between the RFS renewable mandate and the E10 blendwall. Based on this switching behavior, current values of D6 RINs were computed using a joint probability approach. The analysis showed that the ethanol RINs markets appears to be assuming there is about an 80 percent chance that a future court ruling will uphold the EPA’s proposed write down of the renewable mandate for 2014 and about an 80 percent chance that the biodiesel blenders tax credit will be extended for 2014. This may be somewhat over-confident about the chances for the different outcomes and suggestive of the possibility that the decline in D6 RINs prices since last summer may be in store for a bit of a correction.

November 1, 2013 NOTE: This post has been modified from the original version published on October 31, 2013. There were two small errors in the joint probability tables, which were originally published on the October 30, 2013 post on biodiesel RINs. The entries for the lower-left and upper-right cells were switched and the lower-right cell was incorrectly reported as $1.70 when the correct value is $1.77. The changes increase the first computed RINs price to $0.72 from the previously reported $0.63, and increases the second computed RINs price to $0.25 from the previously reported $0.20, Overall, the errors only have a minor impact on the results and do not change any of the conclusions in the post. Corrected versions of the two tables are now presented. The text has been altered where relevant to reflect the changes.