In the most recent post looking at Renewable Identification Number (RIN) stock levels for 2014 (available here), the potential impact of EPA’s proposed rulemaking for the 2014 Renewable Fuel Standard mandate levels was discussed.  Today’s post provides an update on RIN stocks and takes a look at the pace of RIN generation so far in 2014.

Figure 1 plots monthly D4 RIN generation relative to implied monthly mandate needs (annual mandate divided by 12) using data from EPA’s EMTS from July 2010 through February 2014. More than 330 million D4 RINs were generated in December of 2013, most likely driven by expiring biodiesel tax credit incentives.  A total of more than 2.7 billion D4 RINs were generated in 2013, providing more than enough for compliance with the 1.92 billion RIN gallon (1.28 billion volumetric gallons) mandate level. However, generation of D4 RINs in 2014 has fallen dramatically to just 137 million and 156 million RIN gallons in January and February, respectively. 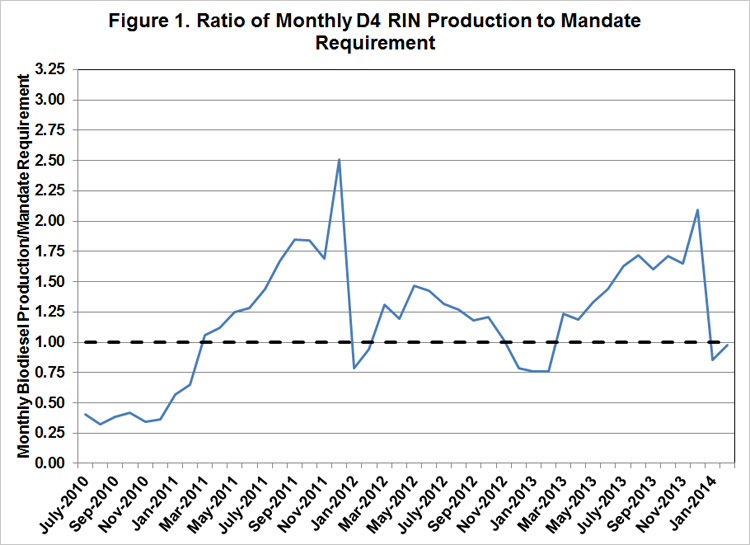 A total of 556 million D5 RINs were generated in 2013, implying the use of excess D4 RINs towards compliance with the undifferentiated advanced mandate component.   Monthly generation of D5 RINs declined throughout the last quarter of 2013, and has continued to decline in 2014 with 8.7 million D5 RINs generated in January and less than 6 million generated in February.

Figure 2 plots D6 RIN generation relative to implied mandate needs since July 2010. Following a rebound at the end of 2013, generation of D6 RINs has fallen in the first two months of 2014.  In January, 1.17 billion D6 RINs were generated and 1.05 billion were generated in February.  These levels fall below the implied need at the statutory mandate level of 14.4 billion gallons for 2014, but very close to the needed generation implied by the mandate level of 13.01 billion gallons in EPA’s proposed rule for 2014. 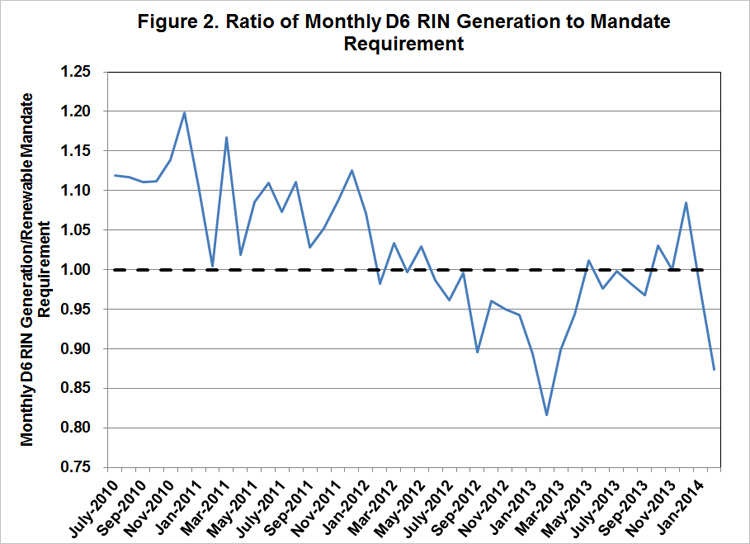 Note: The data for January and February 2014 in Figure 2 use the statutory renewable mandate level of 14.4 billion gallons for 2014.

Data for the first two months of 2014 suggest lower RIN generation across all D-code categories.  Extending the average monthly production of D4 RINS through the end of 2014 provides an estimated generation level just under 1.76 billion RIN gallons, falling short of the 1.92 billion gallon mandate.  Production of D5 RINs suggests total generation of around 87 million gallons in 2014.  Combining the estimated carry-in of 440 million advanced RIN gallons with total generation of 1.85 billion gallons would imply a total of almost 2.3 billion advanced RINs available for compliance towards the proposed mandate level of 2.2 billion gallons.

The data on generation of D6 RINs results in an estimate of 13.3 billion RIN gallons generated in 2014. Generation at this level would be adequate for compliance with the proposed renewable mandate of 13.01 billion without the need for D6 RIN stocks.

RIN generation in the first two months of 2014 has fallen below the pace of production experienced in 2013. Total RIN stock carry-in for 2014 is approximately 1.872 billion RIN gallons.  Carry-in of D4 RINs are estimated to be limited by the 20% rollover provision at 384 million RIN gallons.  Total advanced RIN stock carry-in could be as low 440 million RIN gallons due to the 20% rollover provision if the proposed advanced mandate level of 2.2 billion gallons is finalized.  This would leave up to 1.432 billion RINs available for use towards the renewable mandate component in 2013.

Extending the average monthly RIN generation numbers through to the end of the year suggest that advanced RIN stocks will be need for mandate compliance in 2014 while D6 RIN generation could be sufficient to comply with the proposed renewable mandate component without drawing down RIN stocks. Compliance at the statutory renewable mandate level of 14.4 billion gallons would likely require the use of RIN stocks.  These estimates are based on RIN generation data for the first two months of 2014. Therefore, they should be viewed with caution as the pace of generation could change in any or all of D-code categories.