Today’s post continues the historical analysis of the new County ARC and Supplemental Coverage Option programs created in the 2014 Farm Bill. Last week’s post (farmdoc daily June 5, 2014) focused on the likelihood of payments being triggered by yield or revenue losses on soybean acres in Illinois. This post provides estimates of relative payment size on Illinois soybean acres based on the same historical data. Similar analyses have also been performed for corn acres in Illinois (farmdoc daily May 8, 2014 and May 15, 2014). More details on the new commodity program options can be found in farmdoc daily February 20, 2014. Details on SCO can be found in farmdoc daily February 27, 2014 and April 24, 2014.

Illinois county yield data and national marketing year average prices for soybeans from 1972 through 2013 were collected from NASS. Soybean futures price data was also used to collect base and harvest insurance prices over the same time period. This historical data was then used to put together an historical analysis of the county ARC and SCO programs on Illinois soybean acres from 1977 through 2013 (the 1972 to 1976 data was needed to develop county ARC revenue guarantees beginning in 1977).

For each year in the analysis, actual soybean revenues or yields were compared to their respective program guarantees to determine if program payments would have been triggered. County ARC triggers payments if actual revenue (MYA price times county yield) falls below 86% of the benchmark revenue (based on previous 5 years of MYA prices and county yields). SCO triggers payments if actual revenue (harvest price times county yield) or yield falls below expected revenue or yield (based on county trend yields and insurance prices).

The historical analysis was done under the same assumption as those used in the analysis in last week’s post, namely:

Table 1 below reports the average payment size for the County ARC and SCO programs for soybeans in Illinois. Also included in the table is an average payment size, conditional on a payment occurring. This conditional measure is the average payment size considering only years in which a payment would have been triggered. Three cases for SCO coverage are considered. One when SCO is coupled with yield protection (YP), another where SCO is coupled with revenue protection with the harvest price exclusion (RP-HPE), and finally SCO coupled with revenue protection (RP). For each SCO scenario, a coverage level of 75% for the underlying individual insurance plan was chosen in an attempt to provide an appropriate comparison with the County ARC program. County ARC covers losses between 86% and 76% of the county revenue guarantee – a 10% band of revenue coverage. SCO with 75% coverage covers county yield or revenue losses between 86% and 75% of county yield or revenue guarantee – an 11% band of yield or revenue coverage.

The average payment size for the County ARC program across IL counties for soybeans was estimated to be 1.42% of the guarantee. This is comparable to the estimate of 1.65% for corn acres. The average payment size for SCO with 75% YP is just under 1% of the county yield guarantee. Average payment sizes for SCO with RP-HPE and RP are 1.29% and 1.90%, respectively. The SCO payments size estimates for soybeans are all smaller on a percentage basis than previous estimates for corn acres. This reflects the smaller yield variability typically experienced with soybeans, as well as reduced futures price variability for soybeans as compared with corn.

To provide an example of the expected payment levels for these programs at current price and yield levels, consider a county with an expected trend yield for soybeans of 55 bushels per acre, and an ARC county yield guarantee of 52 bushels per acre. These numbers would be fairly typical of counties in central IL for 2014.

The conditional average payment size for County ARC on soybean acres was estimated to be 4.79% of the ARC revenue guarantee. For SCO coverage, the conditional average payment sizes range from 2.65% of the county soybean yield guarantee when coupled with YP to 3.59% and 4.44% of the county soybean revenue guarantee when coupled with RP-HPE and RP, respectively.

These numbers indicate that, on average in IL, expected payments on soybean acres from County ARC might be fairly comparable to or slightly larger than those of SCO coupled with 75% RP-HPE. Note that these estimates are for gross program payments, and do not include the farmer-paid premium associated with SCO. Furthermore, these estimates do not consider any net payments received from the producer’s underlying plan of insurance (i.e. YP, RP-HPE, RP, or ARP) or, in the case of SCO coverage, the Price Loss Coverage commodity program. Note that the SCO average payment estimates would be larger if the individual coverage level was reduced and vice versa.

The average payment sizes do provide some measure of what the “actuarially fair” premium rate might be for SCO on soybean acres in Illinois. However, actual rates for SCO determined by the Risk Management Agency will most certainly differ from those reported here due to differences in estimation methodology and various loadings that will be added to their estimated fair premium rates. 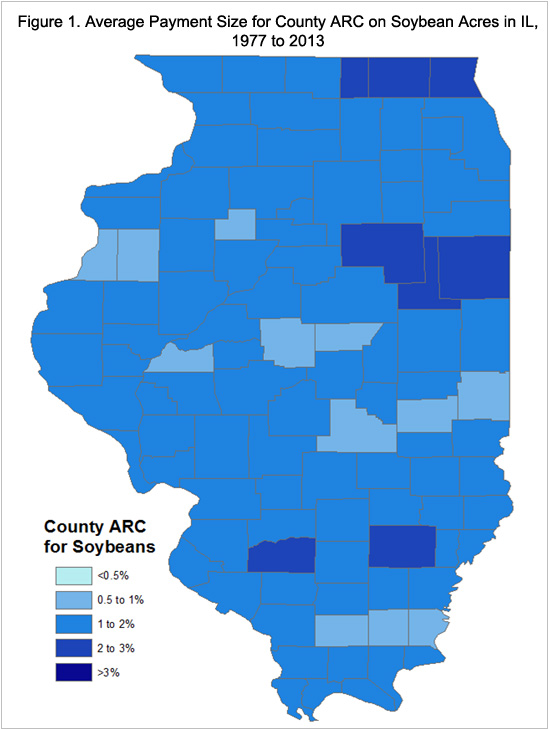 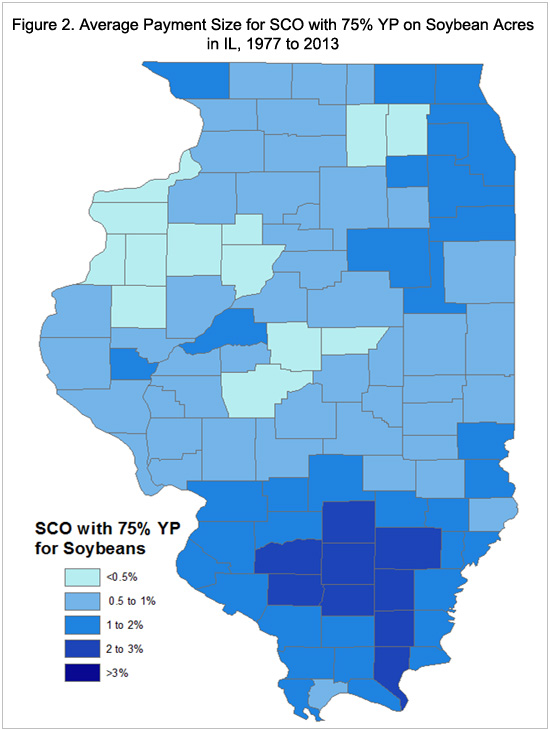 Figure 2 illustrates average relative payments sizes for SCO coupled with 75% YP. Average program payments range from less than 0.5% to as high as 2.6% of the expected county soybean yield. Similar to corn, the largest average payments for SCO with 75% YP tend to be focused in southern Illinois counties where yield variation is greater than in the northern and central parts of the state. 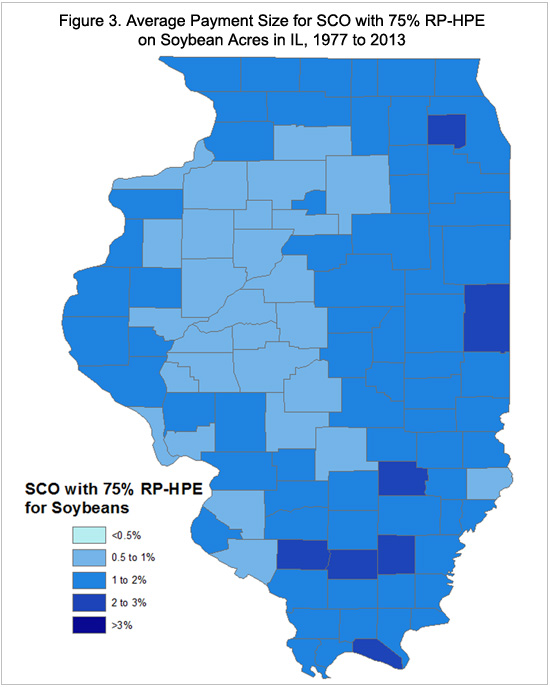 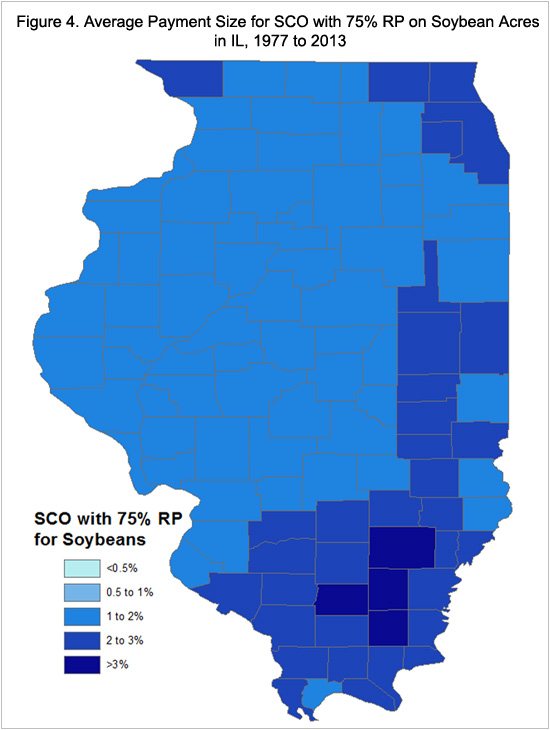 Continuing with the historical analysis of the County ARC and SCO programs introduced in May for corn (farmdoc daily, May 8, 2014; May 15, 2014) and last week for soybeans (farmdoc daily, June 5, 2014), estimates of average payment sizes for the programs were computed for soybean acres across Illinois counties. The average payment size for soybean acres across IL counties for County ARC is comparable to that of SCO when coupled with 75% revenue protection. SCO coupled with either RP-HPE or RP on soybean acres is estimated to trigger relatively larger payments than when coupled with YP. This is due to the additional price protection offered with the revenue-based plans. However, there is considerable variation in estimated payment sizes across Illinois counties for all programs. In relative terms, average payment sizes tend to be consistently larger in southern Illinois counties due to the higher level of yield variation relative to the northern and central regions of the state. These results are all largely consistent with the estimated patterns for program payments on corn acres.

While the expected payment size estimates provide one comparison across the new revenue-based commodity and crop insurance programs that producers will have access to in the coming years to supplement their crop insurance coverage, additional factors need to be considered. First, the size of expected and actual SCO payments will differ when coupled with individual plans at different coverage levels. The 75% coverage level examined here was chosen to make the SCO coverage band similar to that offered by the County ARC program. Additionally, the premium cost associated with SCO coverage, and the potential to receive Price Loss Coverage payments, should be factored in to the comparison. Future posts will continue to analyze the programs introduced in the 2014 Farm Bill to provide more information for farmers and landowners in making their commodity and crop insurance program decisions.

Paulson, N. "2014 Farm Bill: Estimated Payment Sizes for County ARC and SCO for Corn in Illinois." farmdoc daily (4):90, Department of Agricultural and Consumer Economics, University of Illinois at Urbana-Champaign, May 15, 2014.

Paulson, N. "2014 Farm Bill: Historical Likelihood of County ARC and SCO Payments for Corn in Illinois." farmdoc daily (4):85, Department of Agricultural and Consumer Economics, University of Illinois at Urbana-Champaign, May 8, 2014.