The farmdoc daily posts on May 8th and May 15th analyzed the County Ag Risk Coverage (ARC) and Supplemental Coverage Option (SCO) programs created in the 2014 Farm Bill. County ARC is one of the optional commodity programs available to producers of eligible program crops, while SCO is an optional insurance program which supplements the producer’s underlying individual plan of insurance. Both programs have “shallow loss” coverage designs: payments are triggered when actual revenues or yields fall below a specific guarantee, and are capped at a percentage of the value of the guarantee (details on the new commodity program options can be found in farmdoc daily February 20, 2014; details on SCO can be found in farmdoc daily February 27, 2014 and April 24, 2014; all posts in our continuing series on the 2014 Farm Bill can be accessed here). Today’s post extends the historical analysis of County ARC and SCO to soybeans in Illinois. Since the decision to use the County ARC (or Individual ARC) program limits the producer’s eligibility to use SCO, analysis comparing these programs should be useful in making program decisions.

Illinois county yield data and national marketing year average prices for soybeans from 1972 through 2013 were collected from NASS. While the final 2013 MYA price will not be determined until the end of August, the current estimate of $12.70 per bushel for soybeans is used. Soybean futures price data was also used to collect base and harvest insurance prices over the same time period. This historical data was then used to put together an historical analysis of the county ARC and SCO programs from 1977 through 2013 (the 1972 to 1976 data was needed to develop county ARC revenue guarantees beginning in 1977).

The historical analysis was done under the following assumptions:

Table 1 below reports the likelihood of County ARC and SCO payments being triggered on soybean acres over the historical period. The likelihoods reported are averages across all the estimated likelihoods for individual counties in Illinois. County ARC payments for soybeans would have been triggered nearly 1 out of every 5 years in Illinois counties.

Note that these average historical likelihoods are lower than those found for corn (see table 1 in farmdoc daily May 8, 2014), but the comparison across programs is similar. County ARC payments, on average, have been more likely historically than SCO coupled with YP. The likelihood of payments on soybean acres in Illinois for County ARC and SCO with RP-HPE are fairly similar; SCO with RP would have been more likely to trigger a payment than County ARC for soybeans. 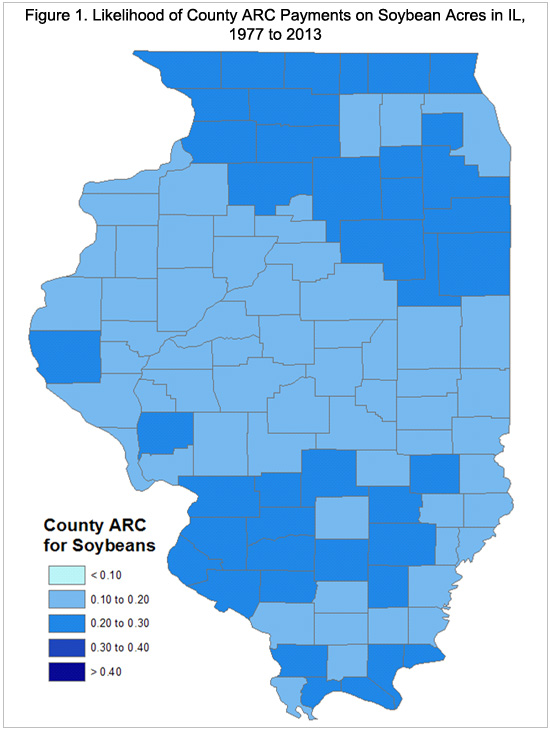 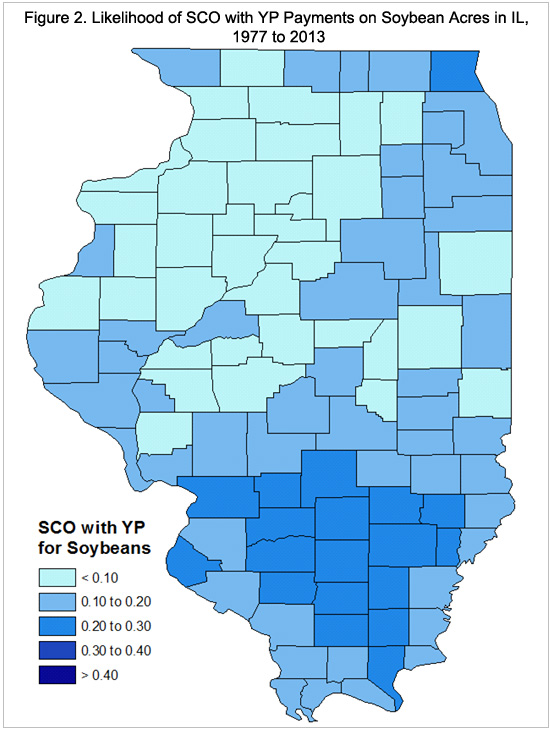 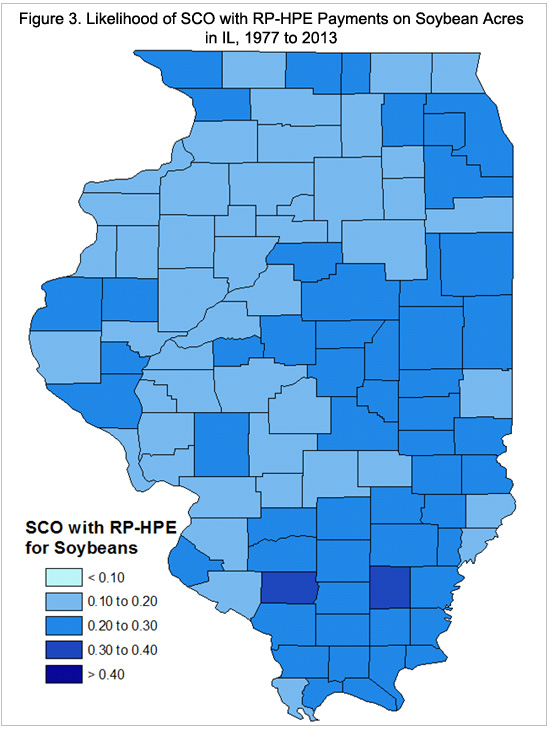 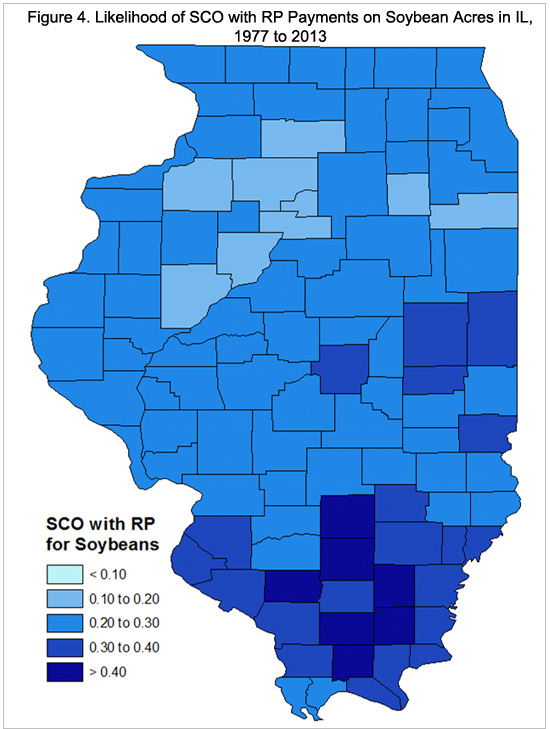 Note that while the size of SCO coverage does change with the coverage level chosen for the individual insurance plan, the likelihood estimates reported in table 1 and illustrated in figures 1 to 4 do not change since the trigger remains at 86% of expected yield or revenue. Only the amount of coverage, or potential size of the SCO payment, would change at difference insurance plan coverage levels.

Based on historical price and yield data, the likelihood of County ARC program payments on soybean acres tends to exceed that of SCO payments when coupled with yield insurance. However, SCO payments when coupled with revenue insurance have a greater historical likelihood of being triggered than the County ARC program, particularly in the case of SCO with RP. This provides some additional information for producers and landowners to consider when making choices among programs.

In Illinois, crop producers have strong preferences for revenue insurance products at the higher end of the available coverage level range (farmdoc daily April 29, 2014). If one assumes that farmers do not significantly alter their crop insurance choices, the analysis in this post shows that IL producers will need to compare the potentially lower likelihood of County ARC payments with the greater likelihood of SCO program payments when used with revenue insurance with the different premium costs associated with individual coverage alone versus individual coverage plus SCO. This is true for the analysis provided today for soybean acres, as well as the previous analysis done for corn acres (farmdoc daily May 8, 2014).

Additional analysis will be performed as information becomes available regarding specific regulations about the programs from the Farm Service and Risk Management Agencies. The historical likelihood estimates provided in today’s post do not allow for comparisons between the timing and potential size of net program payments.

Future posts will continue to examine the historical analysis for individual counties to identify conditions under which each program option triggers payments. Premium rate information for the SCO program from RMA will be required for a more thorough comparison of the expected net benefits associated with the various available forms of supplemental coverage. Ultimately, producers will need to compare specific strategies which might involve the use of the combination of a commodity program with crop insurance of different types and coverage levels.

Paulson, N. "2014 Farm Bill: Historical Likelihood of County ARC and SCO Payments for Corn in Illinois." farmdoc daily (4):85, Department of Agricultural and Consumer Economics, University of Illinois at Urbana-Champaign, May 8, 2014.

Paulson, N. "2014 Farm Bill: Estimated Payment Sizes for County ARC and SCO for Corn in Illinois." farmdoc daily (4):90, Department of Agricultural and Consumer Economics, University of Illinois at Urbana-Champaign, May 15, 2014.

Schnitkey, G., and B. Sherrick. "Coverage Levels on Crop Insurance and the SCO Alternative." farmdoc daily (4):78, Department of Agricultural and Consumer Economics, University of Illinois at Urbana-Champaign, April 29, 2014.