The Census of Agriculture provides a wealth of information on U.S. farms, ranches, and operators. The USDA recently released a complete report of state and county-level farm and ranch statistics for the 2012 Census (available here). This post explores one measure provided by the Census that receives considerable attention, the amount of acreage dedicated to agricultural production.

The Census defines a farm as any place from which $1,000 or more of agricultural products were produced and sold, or normally would have been sold, during the reference year, and this definition has been used since 1974. The amount of land in farms in the United States declined between the 2007 and 2012 Censuses from 922 million acres to 915 million acres. This represents a less than one percent decline, the third smallest decline between Censuses since 1950 (source). The states with the largest decline in land devoted to agricultural production include Kentucky (6.7%), Alaska (5.4%), Georgia (5.2%), Mississippi (4.6%), and Wisconsin (4.1%). Given the returns to agricultural production between 2007 and 2012, it is perhaps not surprising that 19 states reported an increase in farmland between the two Censuses.

In many areas, the loss of farmland is an important issue. Farmland in many regions of the country is primary source for development to residential, commercial, or industrial use. In addition to food, fiber, and fuel, farmland is the source of important environmental services, natural amenities, and open space.

According to the 2012 Census of Agriculture, Illinois is home to 26,937,721 acres of farmland. This represents a 0.6% increase from the 2007 Census. The map below shows the distribution of farm acreage by county from the 2012 Census. The map is shaded by quartile, with the darkest counties representing the greatest number of farmland acres. The acreage varies to a large extent by the geographic size of the county. For example, McLean County, the largest county by land area in the State, is also home to the greatest number of farmland acres at 692,291. Interestingly, acreage increased in McLean County increased by 2.4% since the 2007 Census. DuPage County, one of the five collar counties, has the fewest acres of agricultural land at 7,252. 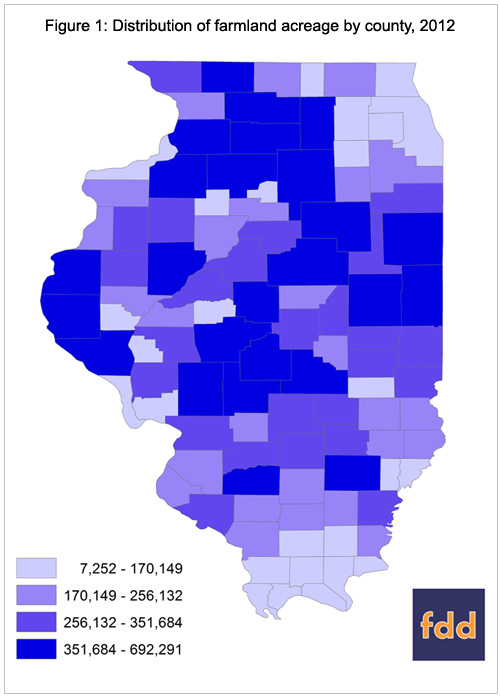 The state as a whole gained 162,621 acres of farmland between the 2007 and 2012 Censuses, and 50 counties (49%) experienced an increase in acreage. Champaign County experienced the largest growth in farmland by count at 66,012 acres, and Alexander County experienced the largest growth in percent terms with a 31.1% increase. Christian County lost the most acres by count at 75,881, and Kendall County had the largest decline in percent terms at 22.3%. The map below shows a fairly even distribution between counties that gained and lost farmland between 2007 and 2012.

Between the 2007 and 2012 Census, Illinois farmland acreage experienced a moderate increase. In a previous post, we discussed the decline in the number of farm enterprises in the state (farmdoc daily May 9, 2014). Illinois farmland acreage increased by 0.6% between 2007 and 2012, and the number of farms decreased at a rate of 2.3%. It is not surprising then that over the same period the average farm size in the state increased by 3.2% from 348 to 359 acres.

NOTE: This post has been corrected from the previous version issued June 4, 2014. It was previously stated that Illinois lost farmland acreage since the 2007 Census, but the text and calculations have been corrected.

Kuethe, T. "Highlights of the 2012 Census of Agriculture: Number of Farms." farmdoc daily (4):86, Department of Agricultural and Consumer Economics, University of Illinois at Urbana-Champaign, May 9, 2014.