In today’s article we will review the historical performance of the Milk Income Loss Contract (MILC) program using data provided by USDA Farm Service Agency (FSA). Then, we will demonstrate how the Margin Protection Program (MPP), by increasing production coverage to be more accommodating to all U.S. dairy producers, offers a larger safety net program and is capable of providing considerably more production coverage than the existing, and soon to be expired, MILC program.

Historically U.S. federal dairy safety net support programs have been designed to provide milk price floors and counter-cyclical revenue support for dairy farmers. The MILC program enacted with the Farm Security and Rural Investment Act of 2002, and as amended in 2008, provides countercyclical revenue support to dairy producers on up to 2.985 million pounds of milk per fiscal year (approximately 140 cows). MILC makes payments to farmers when the USDA announced Boston class I milk price falls below $16.94 per cwt adjusted to reflect the prices of corn, soybeans, and alfalfa hay (see here).

However, consolidation and concentration in the dairy industry has resulted in an increase in the average size of the U.S. dairy farm and a decrease in the number of dairy farm operations (see here). Recent USDA livestock statistics estimate that the largest 5% of dairy operations (500+ cows) produced more than 63% of the milk in the U.S.; while the bottom 88% (<200 cows) produced 24% of the milk in the U.S. (see here). Due in large part to volatility in feed commodities, industry consolidation, and the inability of MILC to provide safety net coverage on a larger portion of the milk supply, the existing safety net programs are viewed to be inadequate to accommodate the modern scale economies of the US dairy sector.

In place of milk price and revenue support programs, the 2014 Farm Bill creates the MPP for Dairy Producers. MPP is a voluntary target-index safety net program that provides income-over-feed-cost (IOFC) margin protection at various farmer-selected margin levels and coverage percentages (i.e. from $4 to $8 per hundredweight and 25% to 90% coverage). The features of MPP have been covered comprehensively here on (farmdoc daily May 1, 2014). However, when comparing MILC and MPP, one of the appealing features of MPP is the increase in production eligibility constraints. Farms of all sizes can purchase IOFC margin protection on milk pounds equal to their historical maximum levels of milk production. Then in subsequent years the amount of milk eligible for coverage at the farm-level will be revised by USDA using trends in U.S. milk production.

A review of MILC participation over the 2009 to 2013 fiscal years revealed that over 47 thousand dairy operations participated in and received a payment from the MILC program, Table 1. MILC payments were made in 27 of the 60 months during the 2009 to 2013 fiscal years (see here). Over the analysis period 185.1 billion pounds of milk received MILC benefits, and government outlays totaled $1.6 billion dollars. The average return from the MILC program from 2009 to 2013 was $0.89 per hundredweight. Figure 1 maps the aggregate MILC benefits by county.

Due to the production cap, the amount of safety net protection and the effective support price under MILC declines rather sharply for farms that produce in excess of 2.985 million pounds per fiscal year. In order to estimate the proportion of the milk supply receiving MILC benefits U.S. milk production data from USDA was totaled during months in which a MILC payment was made. Then, the ratio of milk pounds receiving a MILC benefit and U.S. milk production during months in which a MILC payment was made was evaluated. Results indicate that during the 2009 to 2013 fiscal years MILC provided benefits for approximately 42% of the U.S. milk supply. As apparent in Table 1, the proportion of the U.S. milk supply covered by MILC declines with the number of payment months due to farms exhausting their production eligibility. 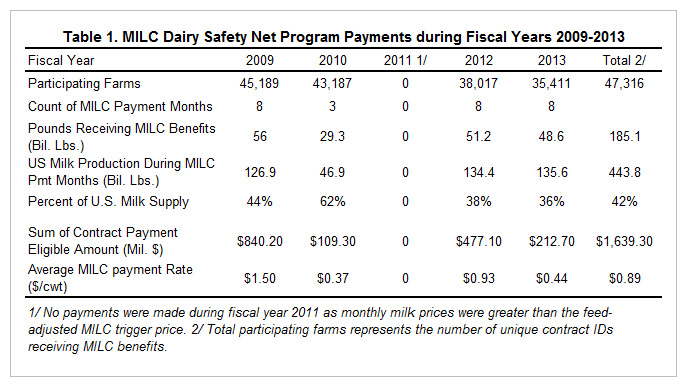 At a state-level the percent of milk receiving MILC benefits was dependent on the farm profiles within the state. As demonstrated in Figure 2, states with a higher proportion of small to medium sized dairy operations have a higher percentage of the aggregate milk supply receiving MILC benefits; while states with large farm operations had a lower percentage. For example, during fiscal year 2013 and using only months in which a MILC payment was made, 5.7 billion of California’s 26.2 billion milk pounds (21%) participated in and received a MILC payment. This pattern is consistent in states with similar large-farm profiles such as Idaho (16%), Texas (19%), and New Mexico (13%). States populated with small to medium sized dairy farm operations such as Pennsylvania, New York, and Wisconsin had a larger percentage covered by MILC at 53%, 47%, and 55%, respectively. MPP was specifically designed to address this gap in safety net coverage. 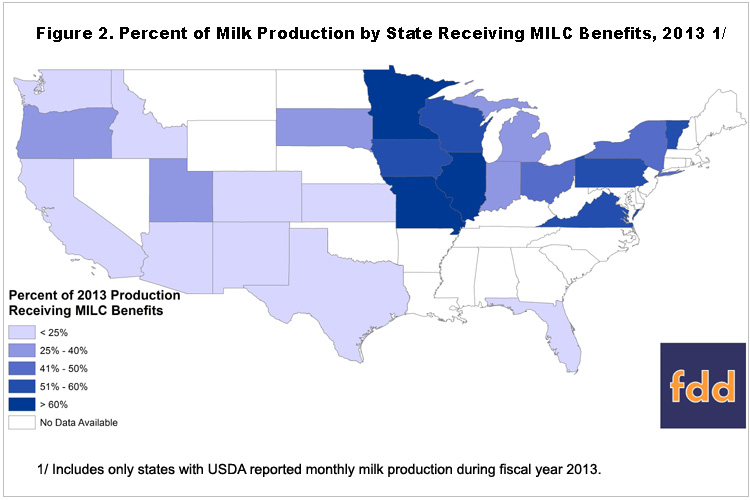 MPP was designed to be more accommodating to all U.S. dairy producers by removing the production caps found under MILC and allowing farms of all sizes to receive the similar levels of income support. Under MPP, a participating dairy farmer may purchase income protection on milk pounds equal to their maximum calendar year production during 2011, 2012, and 2013. This production base will be revised annually by USDA to reflect trends in U.S. milk production. Famers may then cover up to 90%, but not less than 25%, of this milk production base during each calendar year. 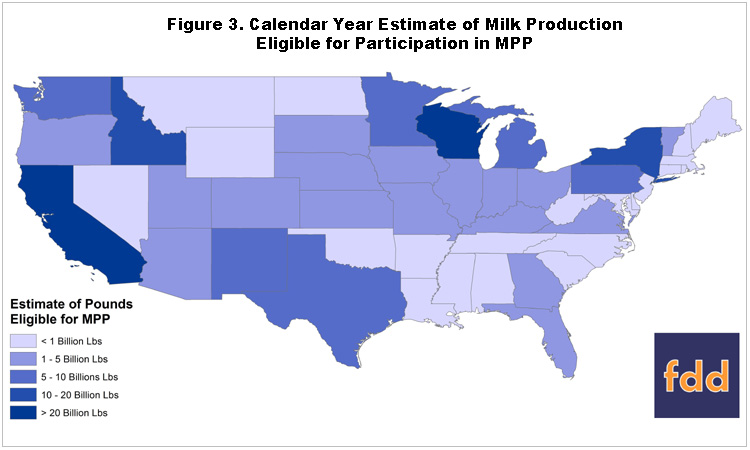 As evident in Table 2, MPP provides the option to purchase more safety net protection than what was covered under MILC. On a national scale it is estimated that of the 202 billion pound production base, up to 182 billion pounds of milk are eligible to purchase MPP coverage during the first year. Meanwhile, during the 2013 fiscal year only 48.6 billion pounds of milk qualified for and received a MILC payment. In order to compare the coverage capacity of the two safety net programs the MPP production base of 182 billion pounds was adjusted to reflect the frequency of MILC payments during fiscal year 2013. Multiplying this total by 90% results in approximately 122 billion pounds of MPP equivalent coverage. This basic estimate of MPP coverage capacity represents a safety net increase of 151% over the MILC program. 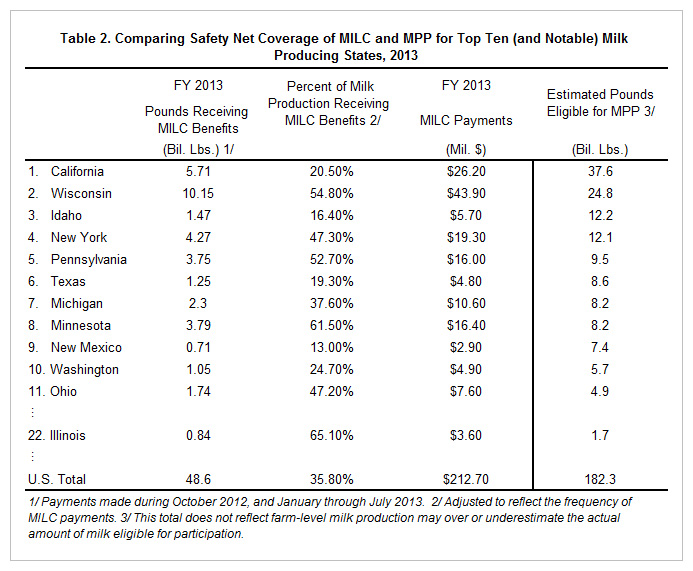 Over the 2009 to 2013 fiscal years the Milk Income Loss Contract (MILC) provided coverage on 185.1 billion pounds of milk and paid over $1.6 billion dollars to dairy farmers. Over 47 thousand dairy operations participated in the no-cost MILC program. However, MILC was limited by a benefit cap of 2.985 million pounds per fiscal year and provided a much smaller safety net for large scale dairy operations. Due to the production cap, approximately 42% of the annual U.S. milk supply actively participated in and received MILC safety net coverage during 2009-2013.

Due to feed price volatility, industry consolidation, and caps on benefit eligibility, MILC is now viewed to be inadequate to accommodate the modern scale economies of the U.S. dairy farm sector. As a replacement, the Margin Protection Program is designed to be all-inclusive by providing farmers the opportunity to voluntarily purchase coverage on pounds equal to their historical maximum levels of milk production.

In today’s article we mapped the safety net support provided by the MILC program and used data from USDA on state-level milk production to map the pounds of milk eligible to purchase MPP. We then compared the MPP coverage capacity to the historical performance of the MILC program to approximate the magnitude of the increase in the dairy farm safety net. Results of this analysis indicate that MPP is capable of providing considerably more production coverage, at 182 billion pounds, than the soon to be expired MILC program.

[1] Actual pounds eligible for MPP would be based on farm-level calendar year milk production.