There are two conventional ways of measuring farm size: (1) number of acres operated and (2) volume of sales. Between the 2007 and 2012 Censuses of Agriculture, the size of the average Illinois farm increased by 3.2% to 359 acres, and the average market value of agricultural products sold per farm increased by 32% to $228,895. However, given the size and diversity of the Illinois farm population, the average farm size may mask some important changes occurring across the distribution.

This post is the third in a series on the insights of the 2012 Census of Agriculture as it relates to Illinois farms. It is important to remember that the Census defines a farm as any place from which $1,000 or more of agricultural products were produced and sold, or normally would have been sold, during the reference year.

Distribution of Farm by Acreage

Previous articles demonstrated that farmland acreage in Illinois increased by 0.6% between the 2007 and 2012 Censuses (farmdoc daily June 4, 2014), and in 2012, Illinois was home to 26,937,721 acres of farmland. The 2012 Census of Agriculture recorded 75,087 farms in Illinois, with an average size of 359 acres per farm (farmdoc daily May 9, 2014). This is a 3.2% increase in average farm size from the 2007 Census. While the average size increased slightly, it can be difficult to understand whether the structure of Illinois farms has changed when looking at the average. As a result, the Census of Agriculture provides counts of the number of farms by acres operated using seven size categories. 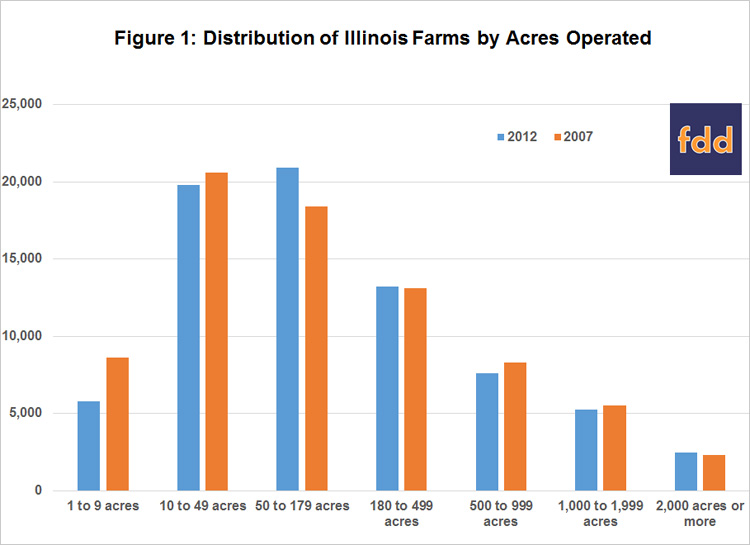 Distribution of Farms by Volume of Sales

In 2012, Illinois farms sold more than $17.2 billion of agricultural products, up 28.9% from the 2007 Census of Agriculture. This translates to per farm average sales of $228,895, up 32% from 2007. As with acreage measures, it can be difficult to capture changes in the composition of Illinois farms by examining average sales alone. As a result, the Census of Agriculture provides counts of the number of farms by a sales class definition with eight categories.

Figure 2 shows that in 2012 one third of Illinois farms (33.3%) sold less than $2,500 of agricultural products, and roughly another third (33.0%) sold more than $100,000 of agricultural products. Approximately 12.7% of Illinois farms fall within the largest sales category – more than $500,000 total sales. Further, the number of farms within each sales class declined between the 2007 and 2012 Censuses, for all but two classes. The number of farms in the largest sales category increased by 33%, and the middle category ($10,000 to $24,999) was unchanged. This demonstrates that while the average sales per farm across Illinois increased substantially between 2007 and 2012, only the largest sales class saw an increase in the number of farms. Further, the distribution of farms by sales class appears to have experienced a larger shift between 2007 and 2012 compared to the distribution by acres operated. 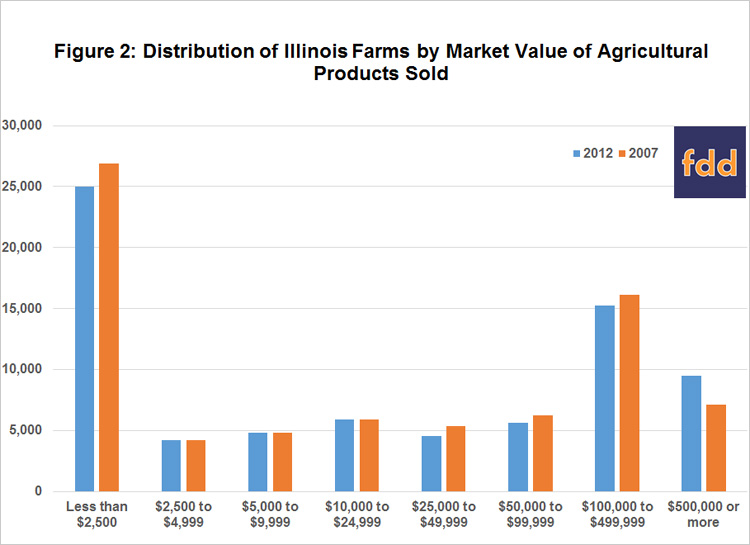 Taken together, the two measures of farm size – acreage and sales volume – suggest an interesting phenomenon on the changing size of Illinois farms. On average both measures suggest an increase in farm size. The average acreage per farm increased by 3.2% while the average value of sales increased by 32%. When examining the distribution of Illinois farms by acreage, the loss of farms within the smallest class seems drastic at 32.9% and the increase in the largest classification seems small at 6.9%. However, when examining the distribution of the sale of agricultural products, the loss of the smallest definition of farms seems small at 6.9% while the growth of the largest sales class seems drastic at 33%.

Kuethe, T. "Highlights of the 2012 Census of Agriculture: Number of Farms."farmdoc daily (4):86, Department of Agricultural and Consumer Economics, University of Illinois, May 9, 2014.