As discussed previously, Illinois was home to 75,087 farms in 2012 (farmdoc daily, May 9, 2014), and the average farm size, as measured by acreage operated, increased by 3.2% from the 2007 Census of Agriculture (farmdoc daily, July 16, 2014). This article revisits the distribution of farm size, but highlights two important findings. One, the majority of Illinois’ small farms are dedicated to livestock production, and, two, the largest farms, in terms of acreage operated, account for a significant majority of the State’s value of agricultural production.

The Census of Agriculture defines a farm as any place from which $1,000 or more of agricultural products were produced and sold, or normally would have been sold, during the reference year.

In a previous article, we discussed how the distribution of farm size changed between the 2007 and 2012 Censuses using two measures of farm size, acreage operated and value of production (farmdoc daily, July 16, 2014). The Census suggests that the majority of Illinois farms are small according to either measure.

The chart below shows the distribution of Illinois farms by acres operated using 12 size categories. In addition, farms are categorized by their production specialization. The Census classifies each farm’s production specialization based on the North American Industry Classification System (NAICS). In figure 1, a “Livestock” farm is defined as any farm from which the majority of farm sales are from the production of beef cattle, feedlots, dairy, hog, poultry, sheep, or animal aquaculture. A “Vegetable, fruit, tree nut, or horticulture” farm includes farms that primarily produce vegetables, melons, fruit and tree nuts, green house, nursery, or floriculture. And the final category “Crop” includes oilseed, grain, tobacco, and other crops. 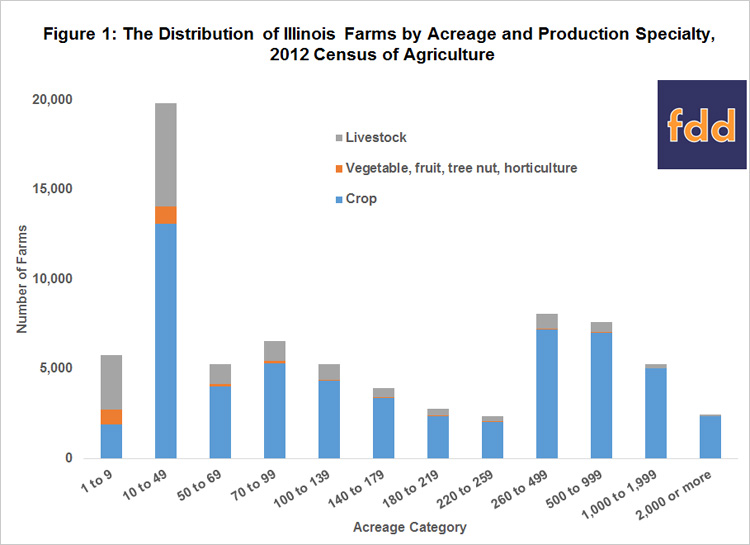 Distribution of Farm Size and Value of Production

A popular rule of thumb in business, sometimes called the Pareto principle or 80-20 rule, states that roughly 80% of the effects come from 20% of the causes. For example, it is often suggested that in agriculture, 80% of commodities are produced by only 20% of farms. The 2012 Census of Agriculture provides some evidence in support of that notion. In 2012, 20.4% of Illinois farms operated more than 500 acres, and but they produced 76.2% of the total value of production. 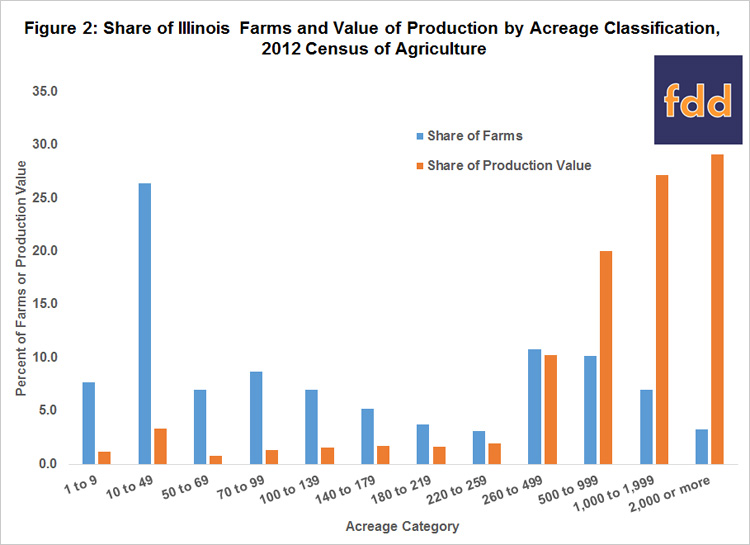 Kuethe, T. "Highlights of the 2012 Census of Agriculture: Number of Farms." farmdoc daily (4):86, Department of Agricultural and Consumer Economics, University of Illinois, May 9, 2014.