Cash rent as a percentage of crop revenue sometimes is used as a benchmark for setting cash rents.  These percentages were higher in 2000-2005 than from 2006-2013.  If cash rents do not decrease in 2015, projections indicate that 2015 cash rents percentages will be near 2000-2005 levels.  At those levels, however, farmers are projected to have losses.  Lowering rents to levels where farmers have no losses results in projected cash rent percentages near 2006-2013 levels. 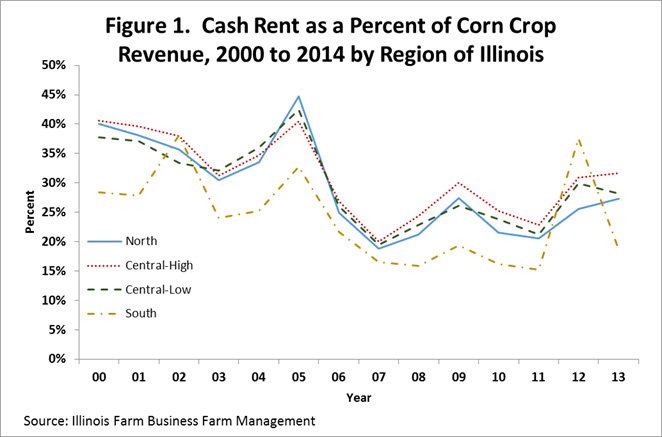 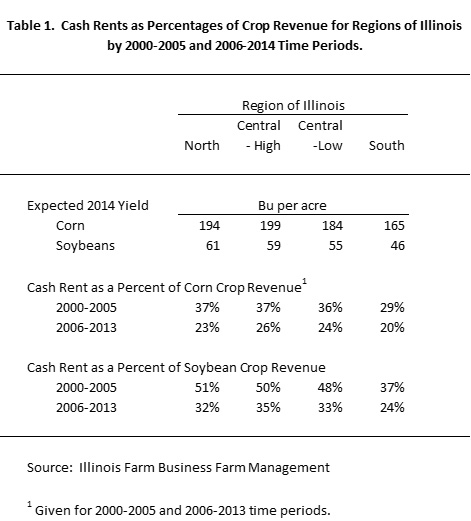 Estimates of 2015 cash rent percentages for corn are shown in Table 2. This table also shows estimates of farmer returns, break-even cash rents, and break-even corn yields.   Calculations are given for the four regions, with discussion below given for northern Illinois. 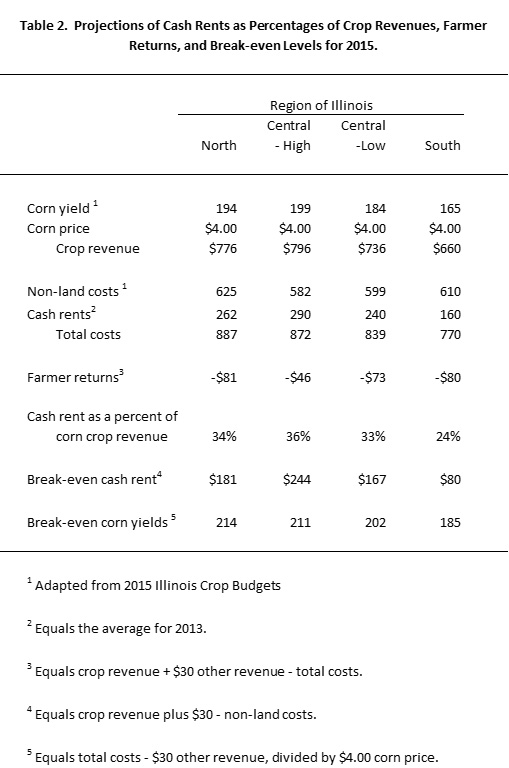 For this example, cash rent as a percent of corn revenue is 34%, roughly the same percentage as for the 2000-2005 period.  If no decreases in cash rents occur, cash rents percentages are back to the previous level before the commodity price increases occurring in the mid-2000s.  These levels, however, results in negative farmer returns, largely because of non-land cost increases that have occurred since 2000 (farmdoc daily, June 3, 2014).  Hence, the using percentage averages from 2000-2005 may not be appropriate for setting cash rents in 2015.

Obviously, corn yields and corn prices for 2014 are not known. A higher corn yield would increase revenue.  In northern Illinois, a corn yield above 214 bushels per acre would give a positive farmer return.  However, a yield of this level likely would result in large supplies leading to lower corn prices, as is occurring this year.

Cash rents as percentages of crop revenues are projected to increase in 2015 near average levels for 2000-2005.  These levels will result in farmer losses due to higher non-land costs from early 2000 levels. The negative returns point to the need for adjustment downward in costs, including cash rents.  The size of negative projected returns also suggests that decreases from average cash rents are needed given current projections of 2015 revenues and costs.