Actual cropland returns in 2013 and projected returns in 2014 and 2015 are considerably below returns from 2010 through 2012. In many cases, projected 2015 returns will be lower than current cash rents, likely require renegotiating for lower cash rents. This article evaluates these situations by 1) identifying farms requiring adjustments in cash rents, 2) identifying how far cash rents must be lowered, and 3) providing comments for both land owners and farmers.

As an example, take a farm that has a 200 bushel expected corn yield that had a cash rent of $179 per acre from 2006 through 2012. The cash rent then increased to $300 per acre in 2013. Keeping the $300 cash rent in 2015 could be justified because the landowner did not get as much return in 2006 through 2012, even though the farmer likely will face a loss. (As an aside, allowing cash rents to lag agricultural returns is not a recommended practice.)

Extent to which Rents need to be Adjust Downward 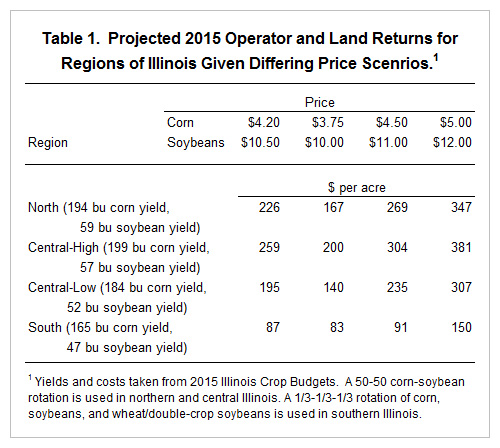 Based on current prices on futures markets, the 2015 Illinois Crop Budgets uses a $4.20 per bushel corn price and a $10.50 per bushel soybean price. At those prices, the projected operator and land return for northern Illinois farmland is $226 per acre (see Table 1). The budgets use an expected corn yield of 194 bushel per acre, and the cash rent for land of this productivity is near $290 per acre. If the cash rent is $290 per acre, the cash rent would have to decrease by $64 per acre to the projected $225 per acre operator and land return for the farmer to have $0 return. Cash rents would have to decrease more than $64 for the farmer to have a positive projected return.

Problems in Setting Cash Rents and Use of Variable Leases

Many cash rents are set in the fall prior to production. In the fall, it is difficult to determine accurate commodity prices to use in budgets. There are good reasons to believe that the long-run price for corn will average $4.60 per bushel (farmdoc daily February 27, 2013). There will be periods in which the corn price will be $1.00 or more higher than this average, as happened in 2011 and 2012. And there will be periods in which corn price averages below $4.00 per bushel. Currently, it appears that we are moving into a period of lower commodity prices, with futures prices suggesting prices below the $4.60 long-run average.

There is a difficulty in setting a cash rent given this range of possible revenues. In hindsight, rents will be too high or too low relative to actual returns. One possibility for dealing with variable revenues and returns is to use rental arrangements that vary lease payments based on economic performance. Share rental arrangements which share revenues and direct costs between the land owner and farmer are one such alternative.

Another alternative is to use a variable cash lease. A variable cash lease has minimum cash rent that is paid by the farmer to the land owner. A “bonus” may be paid if gross revenue is higher than a trigger revenue. These agreements are more fully described here (farmdoc daily September 27, 2011).

Many land owners prefer the simplicity of cash rental arrangements, and desire that the cash rent not to vary much from one year to the next. The desire to have stable cash rents across years is not practical given variability of agricultural returns, unless a land owner is willing to accept a cash rent significantly below going market rates. These low cash rents are needed to provide a cushion to farmers given the wide swings in revenue from one year to the next.

If land owners desire higher average returns, they will need to bear some of the risk associated with agricultural returns, and vary cash rents from one year to the next. Variable cash leases and share rental arrangements are one mechanism for varying rents. If a fixed cash rent is used, the rental rate should be evaluated each year, and may need to be changed when return prospects have changed.

In renegotiating 2015 rents, land owners should be aware that economic conditions for farms have changed. Most farms had relatively high incomes in the years between 2006 and 2012, with particularly high returns from 2010 to 2012. Since the fall of 2013, commodity prices have decreased. So far in the summer of 2014 the prospects of large crops have put downward pressure on prices. Incomes in 2014 will be below those in 2010 through 2013. Prospects are for continued low returns going into 2015 (farmdoc daily July 8, 2014).

Cropland returns are projected much lower in 2014 and 2015 than they were in 2010 through 2013. These lower returns will cause a need to adjust cash rents down on many farms. This will be a difficult process for both land owners and farmers. Use of variable cash leases or share rental arrangements could be an alternative to fixed cash rents, thereby allowing the rental payment to vary with return results on a farm. If a fixed cash rent arrangement continues to be used, lowering cash rents from previous years likely is required for farms with relatively high cash rents.