Today’s post provides an update on Renewable Identification Numbers by looking at updated estimates for RIN carry-in and generation numbers for 2014 through the first six months of the year.  These estimates are then used to examine potential compliance scenarios for the RFS in 2014 as the market continues to wait for final rulemaking from the EPA.

Figure 1 plots monthly D4 RIN generation relative to implied monthly mandate needs (annual mandate divided by 12) using data from EPA’s EMTS from July 2010 through June 2014. The last update on RIN stocks and generation (farmdoc daily, April 11,2014) pointed out the marked drop in D4 RIN generation in the first two months of 2014.  However, D4 generation has rebounded substantially since February, averaging more than 227 million RIN gallons from March through June. Through June, a total of 1.209 billion D4 RINs have been generated in 2014.  Assuming the pace of generation continues, more than 2.4 billion D4 RINs could be generated in 2014.  This would exceed proposed biodiesel mandate needs (1.92 billion) by approximately 500 million RIN gallons. Moreover, it would exceed total proposed mandate needs (2.2 billion gallons) by more than 200 million RIN gallons. 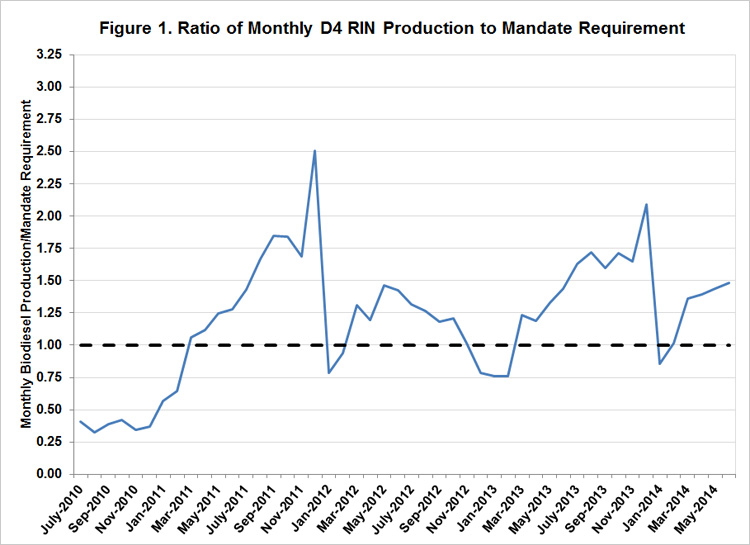 Figure 2 plots D6 RIN generation relative to implied mandate needs since July 2010. Following a rebound at the end of 2013, generation of D6 RINs fell in the first two months of 2014.  In January, 1.17 billion D6 RINs were generated and 1.05 billion were generated in February.  These levels fall below the implied need at the statutory mandate level of 14.4 billion gallons for 2014, but very close to the needed generation implied by the mandate level of 13.01 billion gallons in EPA’s proposed rule for 2014. Similar to the case for D4’s, the pace of generation for D6 RINs has increased since February, averaging 1.2 billion RIN gallons per month from March through June.  More than 7 billion D6 RINS have been generated through June 2014, implying total potential generation of just over 14 billion RIN gallons for the year.  While this is just below implied needs based on the statutory level of the renewable mandate (14.4 billion gallons), it is well above the level required under the proposed rule for 2014 (13.01 billion gallons) as illustrated in figure 2. 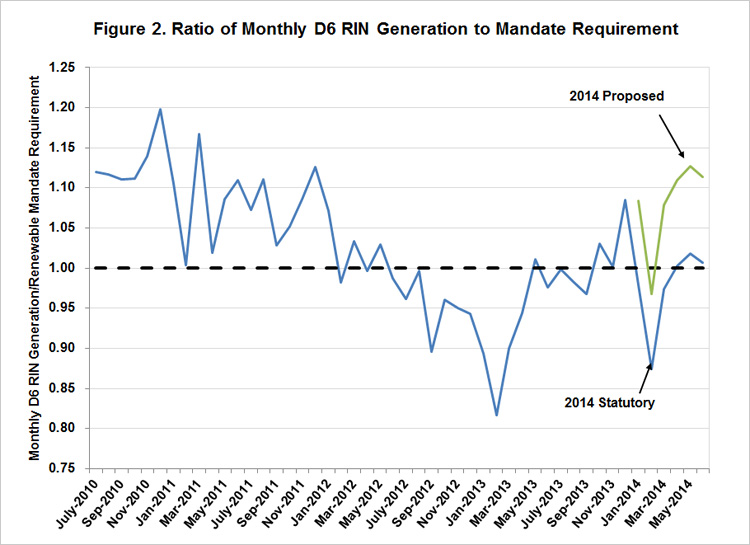 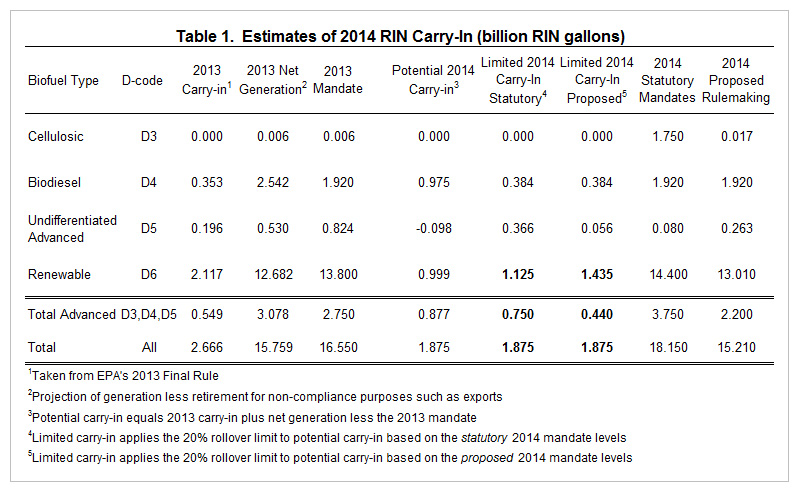 Table 2 combines the RIN carry-in estimates with the generation forecasts for 2014 to illustrate the outlook for RFS mandate compliance in 2014.  Mandate levels, carry-in, and generation estimates are included for the biodiesel (D4), undifferentiated advanced (D5), and renewable (D6) components of the mandate.  Gross generation is based on the RIN generation data available from the EMTS through June, discussed above.  Net generation estimates adjust these values for retirements for non-compliance purposes based on historical percentages for each D code category.  The surplus (deficit) estimates for each category are simply equal to carry-in plus net generation less mandate needs. Note that the estimates in table 2 ignore mandate volumes for cellulosic biofuel.

The first column in table 2 provides estimates for a compliance scenario in 2014 assuming the mandate levels are finalized at their proposed levels for 2014.  Estimated carry-in plus net generation of D4 RINs in 2014 is estimated to be more than sufficient to cover the 1.92 billion RINs required for compliance with the biodiesel mandate, resulting in a surplus of D4 RINs totaling just over 700 million gallons.  Estimates of D5 carry-in plus net generation would fall just short of the required amount for the undifferentiated portion of the 2014 mandate at proposed levels, but the surplus of D4s would allow for a total advanced RIN surplus of 665 million gallons.

Under proposed mandate levels, estimates of carry-in plus net generation of D6 RINs in 2014 would generate a surplus of 1.774 billion RIN gallons after compliance with the 13.01 billion gallon mandate. 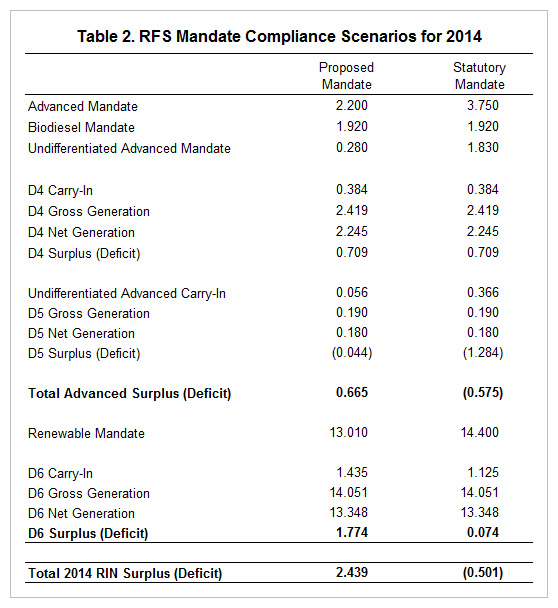 The second column of table 2 provides estimates for a 2014 compliance scenario if the original statutory mandate levels are used in the final rule.  This scenario does not impact the biodiesel component of the mandate.  However, it does result in an estimated deficit of D5 RINs totaling 1.284 billion gallons, and a deficit of total advanced RINs (D4 and D5) of 575 million gallons.

The pace of RIN generation has picked up over the past few months across all D code categories.  Projecting current pace through the end of the year results in gross generation estimates of 2.419 billion D4, 190 million D5, and 14.051 billion D6 RINs.

Adjusting for retirements for non-compliance purposes and combining these with carry-in estimates provides projections useful for examining possible RFS mandate compliance scenarios in 2014.  If the mandate levels in EPA’s proposed rulemaking for 2014 are upheld, the current pace of RIN generation suggests that a surplus of both advanced and renewable RINs will be available for carry-in to 2015.  Examining a scenario at the original statutory mandate levels suggests a deficit of advanced RINs, a small surplus of D6 RINs, and an overall deficit to rollover into 2015.

These estimates suggest that the market does not expect finalized mandate volumes at original statutory levels.  There may be some evidence that obligated parties are incentivizing RIN generation exceeding the needs implied by EPA’s proposed rules, suggesting an expectation for some increase in the mandates from the proposed levels, particularly for D6 RINs and the renewable component of the mandate.