The EPA is apparently going to finalize 2014 RFS rules in the near future.  This will at least temporarily bring the tumultuous process to an end that started with the release of the preliminary RFS rulemaking for 2014 on November 15, 2013.  The preliminary rulemaking signaled a major shift in EPA policy.   The shift essentially involved writing down the renewable (ethanol) mandate to the level of the E10 blend wall as well as substantial cuts in the advanced mandate.  This left the proposed total for the RFS in 2014 at 15.21 billion gallons compared to the statutory total of 18.15 billion gallons.  Not surprisingly, the proposal has been hugely controversial and the subject of an intense lobbying campaign by those that support and those that oppose the policy shift.

As before, it is useful to review the conceptual model of ethanol RINs pricing that we have used before to understand the “message” from the RINs markets.  The version presented in Figure 1 is a general representation.  The demand curve is assumed to be vertical (perfectly inelastic) at 5 billion gallons in order to represent the demand for ethanol as an MTBE oxygenate replacement. It is vertical since non-ethanol alternatives are prohibitively expensive. The demand curve then becomes flat (perfectly elastic) for ethanol prices equal to 110 percent of CBOB gasoline prices between 5 and 13 billion gallons. This breakeven point reflects Department of Energy research on the value of ethanol as an octane enhancer in gasoline blends. The demand curve becomes vertical again to reflect the E10 blend wall, which is assumed here to be 13 billion gallons.  The intersection of market supply and demand in this case results in an equilibrium quantity of 13 billion gallons, equal to the E10 blend wall.  Since it is profitable for gasoline blenders to blend ethanol with gasoline at least up to 10 percent blends, the model predicts that the price of an ethanol RIN is zero up to the E10 blend wall of 13 billion gallons.  The situation is entirely different if the renewable mandate is set above the E10 blend wall.  For example, the statutory mandate for 2014 is 14.4 billion gallons, which results in a “renewable gap” of 1.4 billion gallons (14.4 – 13).  Assuming that higher ethanol blends, such as E85, cannot be deployed in a cost-effective manner in the short-run, then the renewable gap effectively becomes additional biodiesel mandate (for a complete explanation see the July 19, 2013 farmdoc daily article).  In this model, the only way to fill the gap and fully comply with the renewable mandate is by blending biodiesel, which is a higher nested biofuel in terms of RFS compliance.  In sum, the model makes two interesting predictions: 1)  if the RFS renewable mandate is less than or equal to E10 blend wall, the D6 price is zero; and, 2) if the RFS renewable mandate exceeds the E10 blend wall the D6 RINs price switches to being determined by the D4 RINs price. 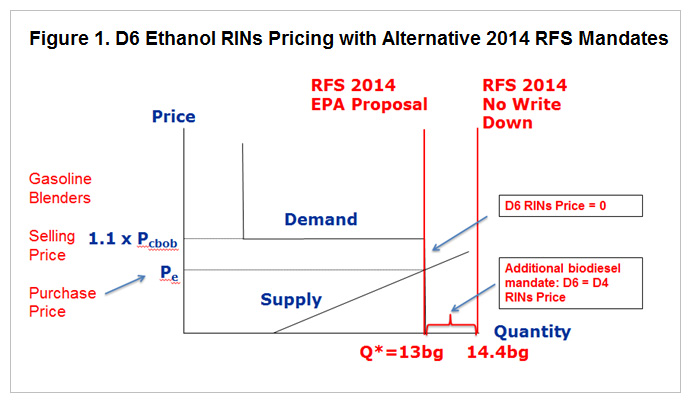 As we have noted before, the coupling/uncoupling of D6 from D4 RINs prices can be used to infer the market expectation of the direction of EPA policy with respect to setting the renewable mandate. Figure 2 shows the prices of 2014 vintage D4 biodiesel and D6 ethanol RINs prices over July 12, 2013 through August 7, 2014.  A 2014 “vintage” RIN indicates the RIN is generated within the 2014 calendar year and can be used for RFS compliance in 2014 and 2015.  This means that any prices reported in 2013 for 2014 vintage RINs are forward contract transactions rather than spot transactions.  Figure 3 reveals that D4 and D6 prices were fully coupled in early July 2013, reflecting a market expectation that the 2014 renewable mandate would exceed the E10 blend wall.  Then, in late July 2013 D4 and D6 prices uncoupled, reflecting the changed market expectation, subsequently proved correct, that the EPA would write down the 2014 renewable mandate so it would not exceed the E10 blend wall.  The gap between the two RINs prices continued to grow through November 2013, when the EPA proposal was officially released.  Then, in late January 2014 D6 prices rose rapidly relative to D4 prices.  After falling back, D6 prices increased sharply relative to D4 prices in mid-June and have remained elevated ever since. 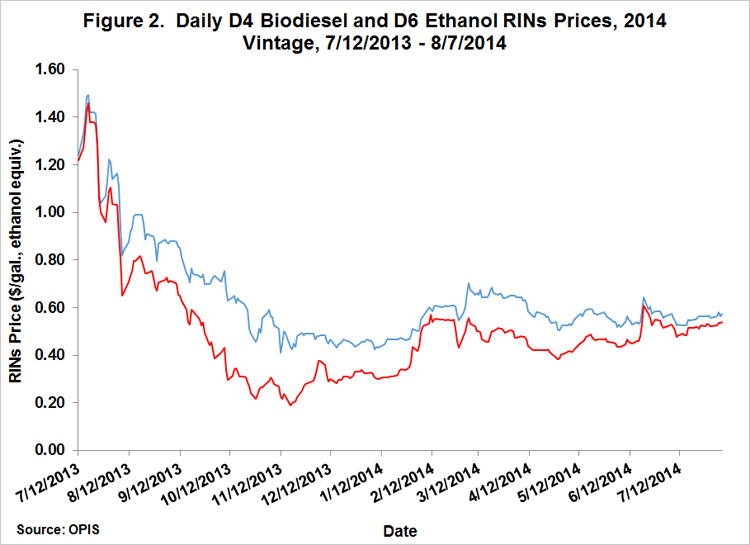 Figure 3 provides a more direct measure of the relationship between D4 and D6 RINs prices.  Here, the ratio of D6 to D4 prices is taken each day of the sample period.  This ratio is bounded by 1 and 0.  As demonstrated in Figure 1, if the renewable gap is positive then in theory the ratio should equal 1, and if the renewable gap is 0 or negative then the ratio should equal 0.  One can easily see that the ratio was very close to 1 in early July 2013 before falling all the way to a low of 0.43 in October 2013.  It has risen in an erratic fashion since that low.  Of particular interest is the behavior of the ratio starting in mid-June 2014.  The ratio on June 10 was 0.82 and increased to 0.97 by June 23.  Since then the ratio has remained elevated and average 0.93.  This is the longest sustained period of the ratio being above 0.90 since early July 2013.  The clear implication is that RINs market traders believe there is a very high probability that the cut to the 2014 renewable mandate will be rolled back. 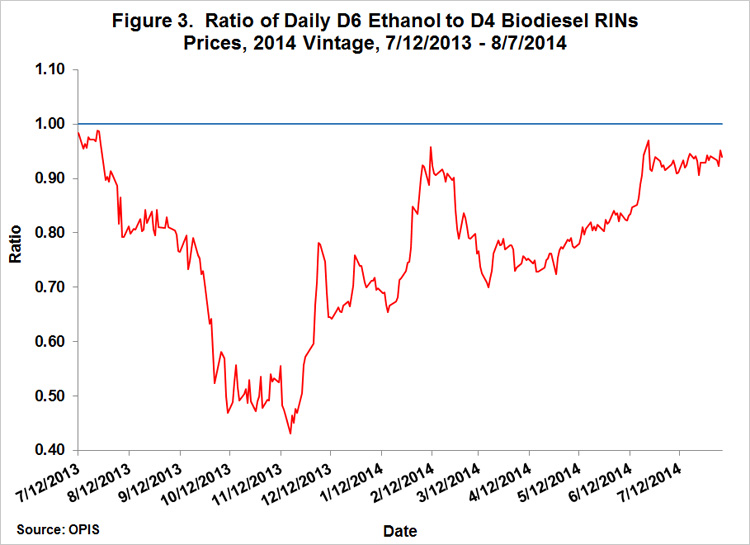 Two additional factors must be considered in our theoretical model of the RINs market in order to imply something about the likely size of the coming reversal. First, the model in Figure 1 is a one-year only model.  In reality, obligated parties under the RFS have to make compliance decisions in light of mandates over a multi-year horizon.  How long of a horizon these parties consider in their compliance strategies is unknown, but it surely is at least 2-3 years into the future.  Second, the model in Figure 1 does not explicitly consider the role of RINs stocks that can be carried over from year-to-year.  As documented by Nick Paulson in a series of farmdoc daily articles in recent years (for example, April 11, 2014; August 6, 2014), these carryover RINs stocks can be substantial, at times exceeding 2 billion gallons.  Figure 4 illustrates how these two additional factors might combine to impact the pricing of RINs.  The y-axis plots the ratio of D6 to D4 RINs prices, the same as in Figure 3.  The x-axis plots the ratio of RINs stocks to the renewable mandate.  The RINs stocks correspond to the initial stocks at the start of obligated parties’ multi-year planning horizon and the renewable gap (ethanol mandate minus E10 blend wall) is the sum of the renewable gap for each year during the planning horizon.  For simplicity, addition to the stock of RINs over the planning horizon are not considered. 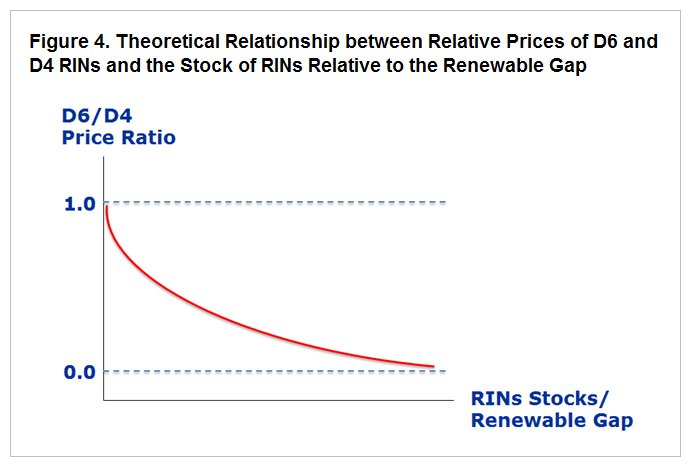 With the expanded model of the ethanol market provided by Figure 4, we can provide a more detailed understanding of the dynamics of RINs pricing the last two years. In the first half of 2013 it was clear that the available stock of RINs would be exhausted within a year or two with full implementation of statutory volumes, so D6 prices were bid very close to D4 prices.  As shown in Figure 3, the price ratio in early July 2014 was only slightly less than 1.  Once the preliminary rules for 2014 became an open secret by October 2013, obligated parties could forecast that RINs stocks would theoretically never be exhausted, and thus, the price of D6 RINs collapsed relative to D4 RINs.  As Figure 3 illustrates, D6 prices never approached zero as our theoretical model predicts because, from the outset, there was considerable uncertainty whether the preliminary rules would be implemented as proposed or survive a court challenge. The situation is less clear between these two extremes and that is exactly what obligated parties have been struggling to figure out in recent months.

We do have some relevant data that can help us infer where the final renewable mandate might turn out to be in final EPA rulemaking for 2014.  First, we know that D6 RINs prices since mid-June have been around 93 percent of D4 RINs prices.  This is very close to the level that existed in the first half of 2013 when obligated parties could easily forecast that the stock of RINs would be exhausted in a year or two.  Second, we know that the stock of RINs carried into 2014 was around 1.9 billion gallons.  Third, we know that the E10 blend wall in 2014 and 2015 is likely higher than 13 billion gallons due to a recovery in gasoline consumption in the U.S.  An updated estimate of 13.2 or 13.3 billion gallons seems reasonable.  The key question, then, is the level of the renewable gap that would exhaust the stock of RINs fairly quickly going forward.  Let’s consider the high end of current range of estimates for the 2014 RVO–13.8 billion gallons.  With an E10 blend wall of 13.2 billion gallons this implies a renewable gap of 0.6 billion gallons per year (13.8-13.2=0.6).  Assuming the same conditions going forward, it would take 3.2 years to exhaust the available stock of RINs.  Taking over three years seems a bit long to justify a D6/D4 price ratio of 93 percent.  The analysis is certainly speculative in nature, but it does suggest that the RINs market is pricing in a renewable mandate that is higher than 13.8 billion gallons.  One possible way to reconcile this conclusion with the lower estimates reported in the media is that RINs traders also have to consider the possibility that a court decision eventually restores the renewable mandate to its full statutory level of 14.4 billion gallons in 2014 and 15 billion gallons thereafter.

The evidence is overwhelming that the EPA is going to roll back the cuts to the renewable (ethanol) mandate in the final 2014 RFS rulemaking. The really interesting question at this point is the size of the rollback, or equivalently, the absolute level of the renewable mandate for 2014.  Reports in the trade press in recent months suggest the final 2014 renewable mandate will be between 13.4 and 13.8 billion gallons.  Some information on this question can be inferred from the relationship between D6 ethanol and D4 biodiesel RINs prices and the projected size of the “renewable gap” relative to the available stock of RINs.  A key fact is that the ratio of D6 to D4 RINs prices has averaged 0.93 since mid-June 2014.  This is the longest sustained period of the ratio being above 0.90 since early July 2013.   This fact suggests that the RINs market is pricing in a renewable mandate that is higher than 13.8 billion gallons.  This may be due to new information about the likely final level of the renewable mandate in 2014 or accounting for the possibility that a court decision eventually restores the renewable mandate to its full statutory level of 14.4 billion gallons in 2014 and 15 billion gallons thereafter.

Irwin, S. "What's Behind the Plunge in RINs Prices?" farmdoc daily (3):193, Department of Agricultural and Consumer Economics, University of Illinois at Urbana-Champaign, October 10, 2013.

Irwin, S. "Will the EPA Reverse Itself on the Write Down of the Renewable Mandate for 2014? The Message from the RINs Market." farmdoc daily (4):31, Department of Agricultural and Consumer Economics, University of Illinois at Urbana-Champaign, February 19, 2014.

Irwin, S. "Implying the Probability of an EPA Reversal on the Write Down of the Renewable Mandate from the RINs Market." farmdoc daily (4):41, Department of Agricultural and Consumer Economics, University of Illinois at Urbana-Champaign, March 5, 2014.