We have had a number of previous farmdoc daily posts discussing the potential problems in implementing the Renewable Fuels Standards (RFS) due to the expanding gap between the implied mandate for renewable biofuels (ethanol) and the E10 blend wall (see here, here, here, and here).  We argued that the EPA faced several constraints as it considered potentially momentous decisions about the RFS rules for 2014 and 2015.  The EPA announced preliminary rulemaking for 2014 on November 15, 2013, and the proposal did indeed signal a significant shift in EPA policy.   The most surprising and controversial aspect of the proposal was the write down of the renewable mandate from 14.4 to 13 billion gallons. This was much larger than anticipated by most analysts (at least prior to the leak of the proposed rulemaking earlier this year) and more aggressive in dealing with blend wall constraints than our own “Freeze It” proposal.  The purpose of today’s post is to trace through the likely implications of the proposed EPA rulemaking in the same manner that we analyzed alternative implementation options in our earlier posts.  Specifically, we investigate two scenarios: 1) implementation of 2014 and 2015 rules as proposed by the EPA, and 2) implementation of 2014 and 2015 rules identical to the EPA proposal with the exception that the renewable mandate is not written down.

There should be no doubt that E10 blendwall constraints drove the shift in EPA policy regarding implementation of the RFS mandates.  The change is summarized in the following statement from the Fact Sheet for the proposal:

The proposal seeks to put the RFS program on a steady path forward – ensuring the continued growth of renewable fuels while recognizing the practical limits on ethanol blending, called the ethanol “blend wall.

This new implementation framework basically takes the E10 blend wall as a starting point and builds the mandated volumes up from this starting point.  EPA rulemaking in previous years worked in essentially the opposite fashion by taking the total RFS volume in the statute as the starting point and then reducing the cellulosic sub-mandate as needed.  Based on the new framework, the EPA preliminary rule making for 2014 proposed a write down of the cellulosic mandate, the advanced mandate, and the total mandate.  The proposed volume requirements, by fuel category, along with the 2013 volume requirements and the statutory requirements for 2014 are presented in Table 1. These volumes are in ethanol equivalents, except for biomass-based diesel which is stated in actual “wet” gallon terms.  Further details on the proposed 2014 volumes can be found in this farmdoc daily post by Seth Meyer and Rob Johansson.

It is not an understatement to say that the EPA’s proposed rulemaking for 2014 is highly controversial.  At the heart of the controversy is the EPA’s argument that it has the statutory authority to write down the total mandate by more than the write down in the cellulosic mandate, which effectively implies a write down in the mandate for corn-based ethanol.  The EPA argues that its authority in this regard is based on the waiver provision in the RFS statutes pertaining to “inadequate domestic supply.”   It is asserted by the EPA that “supply” in this context encompasses not only the production of biofuels but also the ability to distribute, blend, dispense, and consume biofuels.  A thorough analysis of the legal issues surrounding the RFS waiver authority of the EPA can be found in the November 6, 2013 farmdoc daily post by Jonathan Coppess.

Note that the EPA will receive public comment on the proposed volume requirements and announce final rule making after those are evaluated.  In addition to the specific volumes proposed as shown in Table 1, the EPA also provided ranges for the cellulosic, advanced, and total mandates that may be considered for final rulemaking.  If the proposed volume requirements in Table 1 stand as the final EPA rules for 2014, we expect a legal challenge to ensue.

In this section we trace through the likely implications of the EPA rulemaking as announced on November 15 in the same manner that we analyzed alternative implementation options in our September 5 and earlier posts.  Recognizing that the proposed rules could be altered by the EPA or as the result of legal challenge, we also analyze the likely implications of writing down the 2014 advanced volume to 2.2 billion gallons and the total volume requirement to 16.6 billion gallons.  This alternative would leave the implied renewable volume requirement at the statutory level of 14.4 billion gallons.  The analysis is extended to 2015 under the   assumptions outlined below.  In addition, the alternative of writing down only the advanced mandate is evaluated under two scenarios.  The first assumes that the gap between the implied renewable mandate and the E10 blend wall is satisfied mostly with biomass-based biodiesel and the second assumes the gap is filled mostly with E85.  This parallels the compliance scenarios we analyzed in our September 5 post.  In some of our earlier work we assumed that the gap between the implied renewable mandate and the E10 blend wall would be largely filled by biodiesel due to logistical and infrastructure limitations associated with increasing E85 deployment.  Recent analysis shows that market incentives may allow more rapid E85 expansion during the next two years (see our own analysis here, analysis by Seth Meyer, Rob Johansson, and Nick Paulson here, and analysis conducted at Iowa State University by Bruce Babcock and co-authors here and here).  The two compliance pathways are chosen to illustrate the range of possible compliance scenarios to fill the gap between the renewable mandate and the E10 blend wall.  In actuality, there are multiple combinations of biodiesel and E85 that could fill the gap.

A complete set of spreadsheets that shows all the assumptions, calculations, and outcomes for the compliance scenarios described above and graphs comparing outcomes can be found here. The outcomes include the quantities of biofuels consumption by category, the year-ending stock of RINs, and the quantities of feed stocks required for the production of ethanol and biodiesel. The value for key variables under each of the compliance scenarios is found in Table 2 along with assumed values for each category of the RFS mandates. 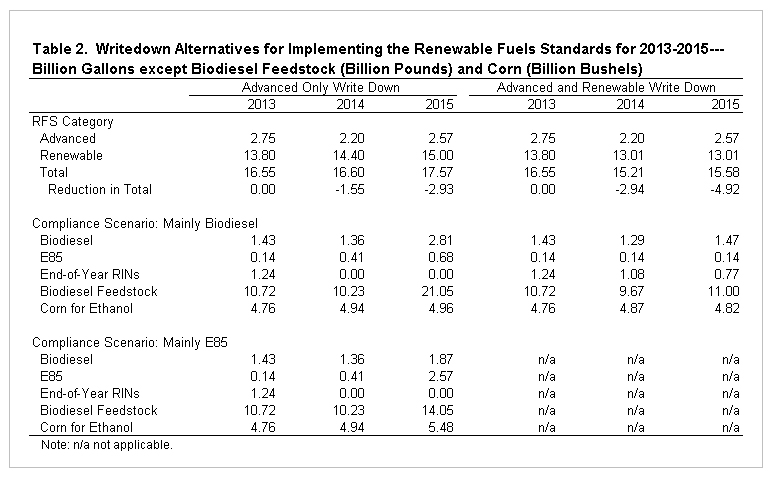 If EPA final rules are the same as the proposed rules and those rules survive any legal challenges, the implications of our analysis are:

If EPA final rules include only a write down of the advanced mandate, the implications of our analysis are:

The EPA surprised many observers when it recently announced proposed 2014 volumes for the RFS mandates.  The new EPA framework for implementing the mandates is keyed to the E10 blend wall and the proposal includes a write down of the corn-based ethanol mandate for the first time.  Not surprisingly, this policy change is highly controversial and the novel legal argument used to justify the write down is likely to be challenged in court.  If the proposed EPA rules are finalized and survive a court challenge, then blend wall problems generally will be resolved, the RINs market will likely return to pre-2012 price levels, and pressures in grain and oilseed markets will be largely abated.  If on the other hand the EPA rules are eventually overturned, then blend wall problems will return in short order, RINs stocks will likely be exhausted by the end of 2014, RINs prices will soar once again, and pressure on the grain and oilseed markets will in all likelihood resume.  Much hangs in the balance on the outcome.