A farmdoc daily article last week (March 5, 2015) chronicled the history of ethanol production profitability for a representative Iowa ethanol plant since 2007. The analysis focused on the high level of profits in 2014 and the recent sharp decline in those profits in the face of crashing crude oil and gasoline prices. Given the pressures emanating from energy markets, it is no surprise that ethanol prices have also fallen sharply, and this is the main driver of the sharp decline in ethanol production profits. What is less appreciated is the role that distillers dried grains with solubles (DDGS) prices have played in offsetting some of the losses from declining ethanol prices. To see this, note that revenue from a representative Iowa plant on December 5, 2014 consisted of $2.18 per gallon from ethanol, $0.30 from DDGS, and $0.08 from corn oil, which by February 27, 2015 had changed to $.1.25 from ethanol, $0.48 from DDGS, and $0.09 from corn oil. Over that same time period the price of corn only increased $0.14 per bushel. The purpose of this article is to evaluate the risk to ethanol production profits of declining DDGS prices in coming months. A key to the evaluation is a better understanding of the factors that influence the price of DDGS. 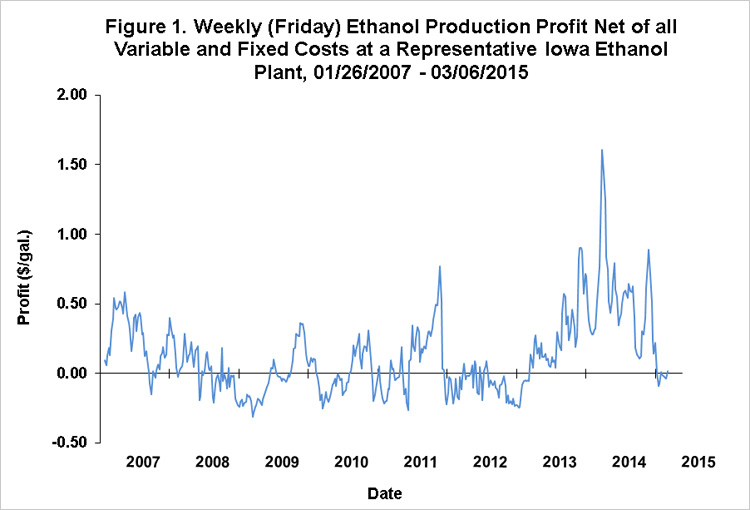 Figure 2 presents the ratio of the average price of DDGS to the average price of corn reported for Iowa plants each Friday by the USDA’s Ag Marketing Service from January 26, 2007 through March 6, 2015. That ratio ranged from 0.67 to 1.48 and averaged 0.91 for the entire period. Except for the 5-month period from July through November 2014, that ratio has been well above the long-term average since August 2013. The high price of DDGS relative to corn contributed to the historically high profitability of ethanol production in late 2013 and the first half of 2014. The current high ratio is contributing to net returns of ethanol production and has supported returns at near breakeven levels relative to total variable and fixed costs of production even as ethanol prices declined sharply beginning in mid-December 2014. 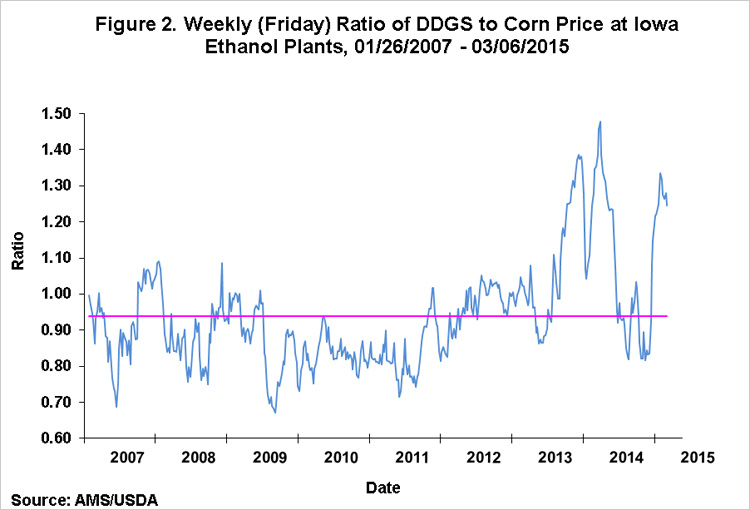 The current high ratio of the price of DDGS and the price of corn, then, raises the obvious issue of the risk of a decline in that ratio. With all other prices unchanged, a decline in the price of DDGS would result in a corresponding decline in net returns. The magnitude of that decline can be illustrated using prices as of March 6, 2015–$169.50 per ton for DDGS and $136 per ton ($3.81 per bushel) for corn. The price ratio was 1.25. If the price of corn remained constant and the ratio declined to 1.0, the price of DDGS would decline by $33.50 per ton, or $0.017 per pound. Assuming that 16 pounds of DDGS are produced per bushel of corn the price decline would result in a decline in returns of $0.27 per bushel. Assuming that 2.8 gallons of ethanol are produced per bushel of corn processed, returns would decline by about $0.10 per gallon. If the DDGS/corn price ratio declined to the long term average of 0.91, returns from ethanol production in this example would decline by $0.13 per gallon. While the declines are relatively small in absolute terms, they would be large enough to drop returns for the representative ethanol plant below the estimated total cost of production. Returns would still exceed estimated variable costs of production, but would cover only about half of the estimated fixed costs. 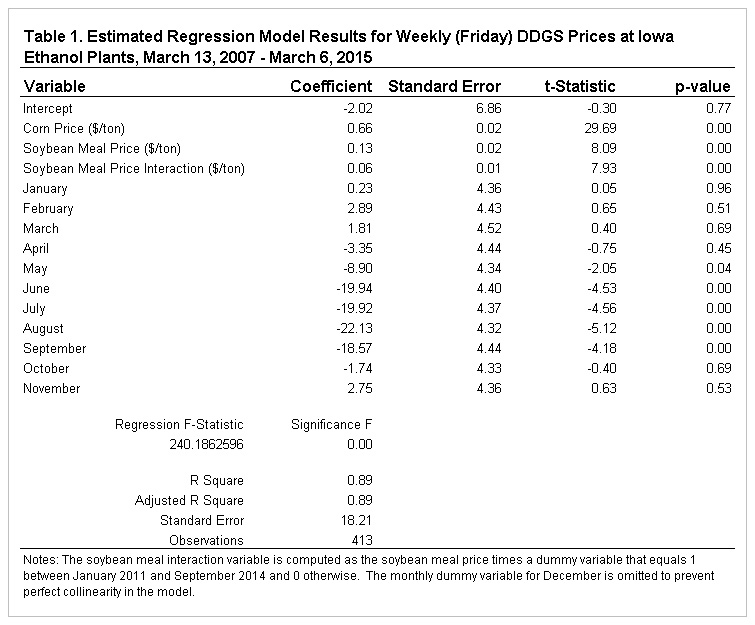 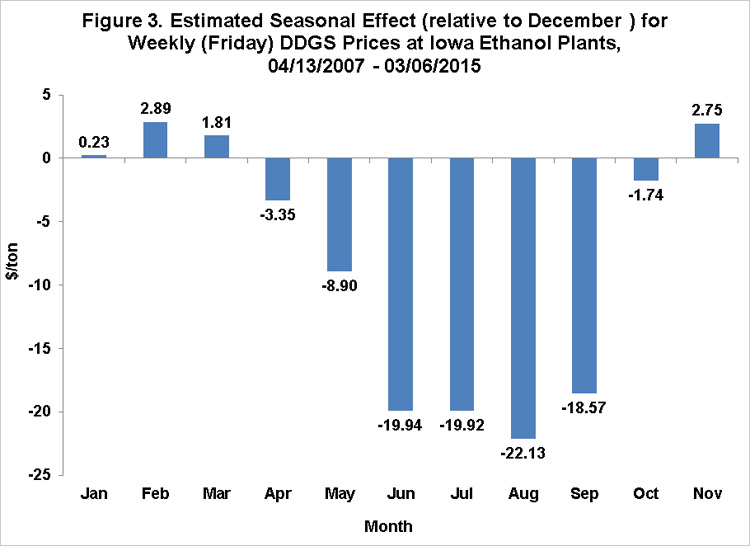 Further detail on the “fit” of the model is presented in Figure 4 which compares actual prices of DDGS to the prices predicted by the regression model. The included variables generally track prices of DDGS reasonably well, but there are periods of large differences between predicted and actual prices, most noticeablbley in 2014. The standard error is a relatively large $18.21 per ton. This means there is roughly a 2/3 chance that the DDGS price will be within +/-$18 of the model price; so, there is certainly room for improvement in explaining the price of DDGS. Still, the current model provides valuable new insights as to the seasonal effects on prices of DDGS and those estimated seasonal effects are especially pertinent to the current situation. We are moving from a period when prices of DDGS tend to be higher than can be explained by corn and soybean meal prices alone to a period when prices tend to be much lower than can be explained by corn and soybean meal prices. This suggests that over the next few months the ratio of DDGS and corn prices could decline measurably from the current high ratio. With corn prices unchanged, the model estimates point to a decline of about $22.00 per ton in the price of DDGS by June. With prices of other components of ethanol profitability unchanged, that reduction would lower net returns by about $0.06 per gallon of ethanol produced. 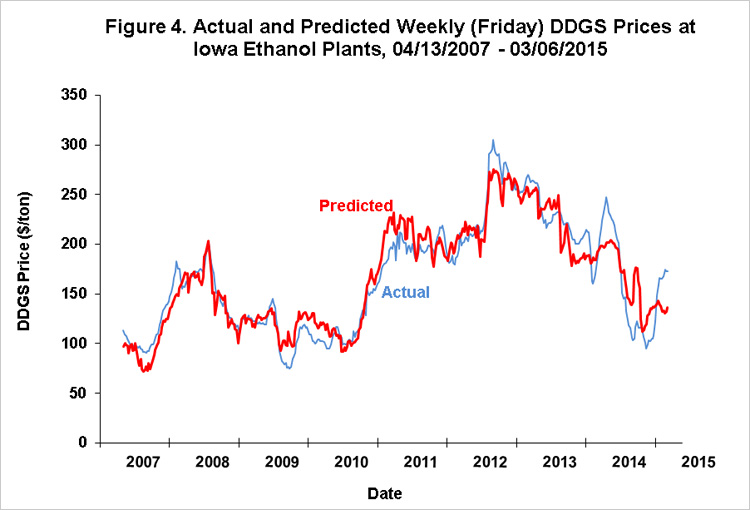 The analysis presented here suggests that there is risk for a decline in the price of DDGS over the next several months even without a decline in corn or soybean meal prices. Without compensating adjustments in prices of other components of ethanol plant returns and/or costs, such a decline would reduce returns for ethanol plants. Since margins are already very thin, returns for some plants could be reduced below the total cost of production, at least for a period. The silver lining, however, is that domestic and export demand for ethanol is likely strong enough that a large, sustained reduction in ethanol production will need to be prevented. In particular, the RFS, regardless of current uncertainties, represents a safety-net for domestic ethanol demand at least at the level of the E10 blend wall. This suggests that if prices of DDGS decline and there are no other compensating adjustments in the price of corn, ethanol prices will need to be increased in order to motivate sufficient ethanol production.