The changing fortunes of the ethanol industry in the face of crashing crude oil prices have attracted a lot of attention. For example, the topic has been the subject of three farmdoc daily articles in recent months (November 12, 2014; December 4, 2014; January 30, 2015). The focus on the changing profit outlook for ethanol producers can obscure the fact that the industry is also coming off the best year it has ever had in terms of profitability. The purpose of this article is to present estimates of ethanol production profitability in 2014 and compare the profits to those earned over 2007-2013.

A model of a representative Iowa ethanol plant is used to track the profitability of ethanol production. It is the same basic model that has been used the last several years in numerous farmdoc daily articles on ethanol markets and policy (e.g., April 11, 2012, June 14, 2013, and March 14, 2014). The model is meant to be representative of an “average” ethanol plant constructed in the last decade. There is certainly substantial variation in capacity and production efficiency across the industry and this should be kept in mind when viewing profit estimates from the model. Some of the model assumptions include:

Model assumption were updated in 2012 and 2013 based on ethanol plant benchmarking studies by Christianson and Associates. We appreciate this firm sharing the results of their studies with us.

Figure 1 presents the three components of plant revenue per gallon–ethanol, DDGS, and corn oil–on a weekly basis from January 26, 2007 through February 27, 2015. The chart shows that ethanol prices dropped throughout 2014 with the exception of sharp, upward spikes in late winter and during the fall. The highest price of ethanol at Iowa plants for the year, $3.15, occurred on March 28, and the lowest price for the year, $1.48, occurred on October 3. Figure 2 shows the four major cost components for producing ethanol. It is immediately apparent that corn is the major input cost, about 70 percent on average, and the steep drop in the price of corn that began in late summer 2013 is the key reason that the ethanol production industry remained so profitable in 2014 in the face of declining ethanol prices. The decline of corn prices relative to ethanol prices is discussed in more detail in earlier farmdoc daily articles (March 14, 2014, October 23, 2014). Some additional cost reductions were seen in late 2014 for natural gas and other variable costs (mainly in denaturant costs). 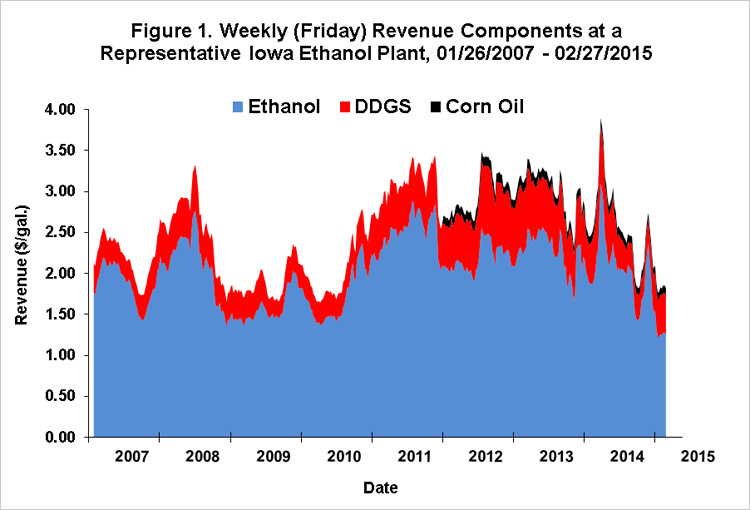 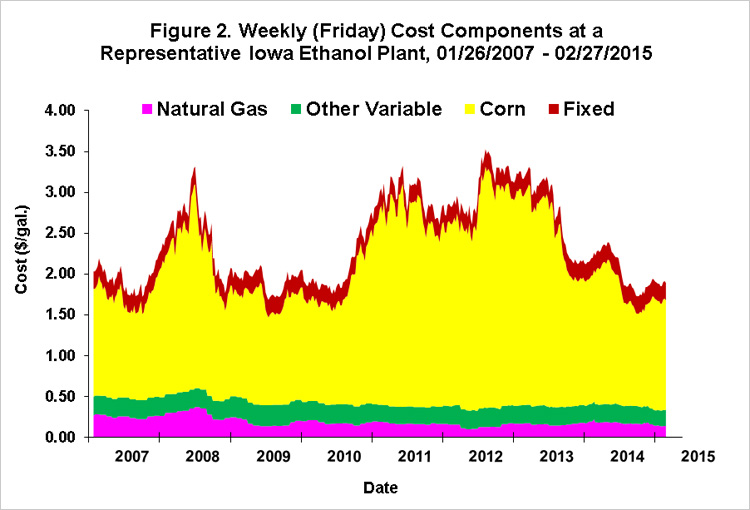 Figure 3 presents the (pre-tax) estimates of ethanol production profits net of all variable and fixed costs. Driven by the combination of relatively high ethanol prices and relatively low corn prices, profits averaged a record $0.54 per gallon in 2014. A new record weekly high profit of an astounding $1.61 per gallon was set on March 28, 2014. This dwarfs the previous record spikes in late 2011 and 2013. The record profits of 2014 are also part of the longest run of uninterrupted profits since we first began estimating margins in early 2007. The streak of positive profits began on March 15, 2013 and ended on January 2, 2015, or a total of 95 consecutive weeks without a loss. The average profit during the streak was $0.43 per gallon. This is more than 10 times the average profit of $0.04 per gallon that a representative plant earned during all the weeks preceding the recent record streak (January 26, 2007 – March 8, 2013). We argued in earlier farmdoc daily articles that an important factor in explaining the relative strength in ethanol prices and profits was surging ethanol exports (June 11, 2014; June 18, 2014). 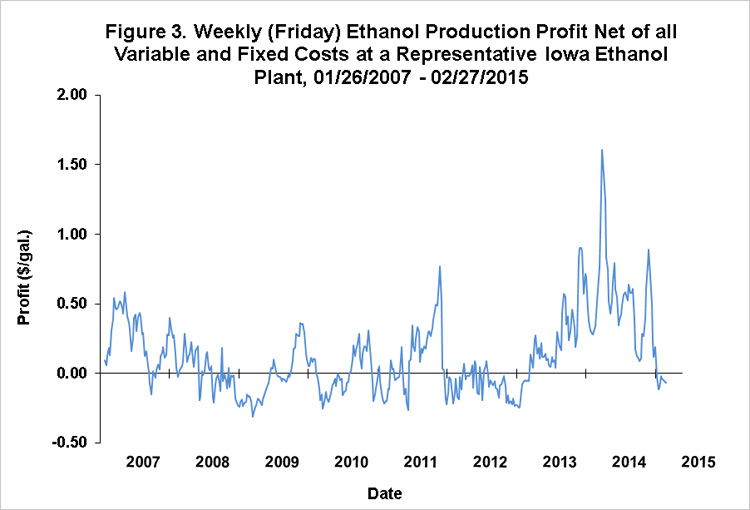 Further perspective on the record profits for 2014 is provided in Figure 4, where the profit margins are aggregated over an annual horizon for 2007-2014. Profits are presented in terms of both total pre-tax net returns and percent return to equity. The 2014 net profit of $54.4 million is more than twice the profits of the next highest year (2007, $25.0 million). Even more impressive, the 2014 net profit exceeds the sum of all profits–$49 million–earned cumulatively over 2007-2013. Averages for the eight-year period of 2007-2014 are $13.0 million and 10.3 percent, respectively. The total cumulative (pre-tax) return to equity holders for the period was $104.0 million. Finally, we can use the average net profit for the representative plant to make a rough estimate of profit for the entire U.S. ethanol industry in 2014. Assuming all plants in the industry earned a net profit of $0.54 per gallon, then, total ethanol production for the U.S. in 2014 of 14.3 billion gallon ethanol implies aggregate industry (pre-tax) profits of $7.8 billion. It was indeed a very good year for ethanol producers. 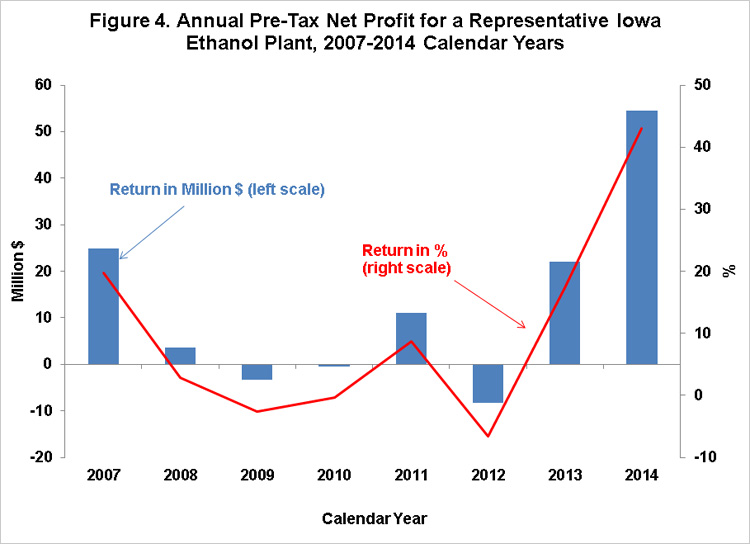 Ethanol producers had a record year of profitability in 2014. The representative Iowa ethanol plant that we have tracked since 2007 earned an estimated pre-tax net profit of more than $50 million. This was driven by the happy combination of relatively high ethanol prices and relatively low corn prices. The large profits of 2014 (and 2013) will provide a much needed financial cushion as the industry faces a substantially changed profit outlook in 2015. The recent crash in crude oil prices ended the record streak of ethanol production profits that began in March 2013. The key question moving forward is whether 2013-2014 profits were a temporary blip due to a unique set of circumstances or reflected a new normal driven by a robust ethanol export market.

Irwin, S. "An Updated Look at the Profitability of Ethanol Production." farmdoc daily (3):115, Department of Agricultural and Consumer Economics, University of Illinois at Urbana-Champaign, June 14, 2013.

Irwin, S. "A Look at the Profitability of Ethanol Plants." farmdoc daily (2):68, Department of Agricultural and Consumer Economics, University of Illinois at Urbana-Champaign, April 11, 2012.

Irwin, S., and D. Good. "Why are Ethanol Prices and Production Profits So High?" farmdoc daily (4):108, Department of Agricultural and Consumer Economics, University of Illinois at Urbana-Champaign, June 11, 2014.