At this juncture, there are differences of opinion about the likely level of prices during the year ahead, with most expecting prices to average lower than during the current marketing year. USDA projections in the May 12, 2015 WASDE report are for an average farm price in a range of $8.25 to $9.75 (mid-point of $9.00). Last month’s projections from the Food and Agricultural Policy Research Institute (FAPRI) at the University of Missouri include an average farm price for soybeans of $9.17. Our own projection from an April 1 webinar is an average price of $9.75. Price projections differ because of different expectations about the supply of soybeans, the strength of soybean demand, and the interaction of supply and demand to determine price.

In the classical supply/demand framework, the average price of soybeans in any particular marketing year represents the equilibrium price determined by the intersection of the supply and demand curves. Note that the curves shown in Figure 1 represent total soybean supply from production and imports and total demand for domestic crush, exports, and ending stocks. Over time, the equilibrium price changes as the demand curve, supply curve, or both shift. Those equilibrium prices, then, can be examined with the stocks-to-use ratio serving as a proxy for the interaction of supply and demand in quantity terms. 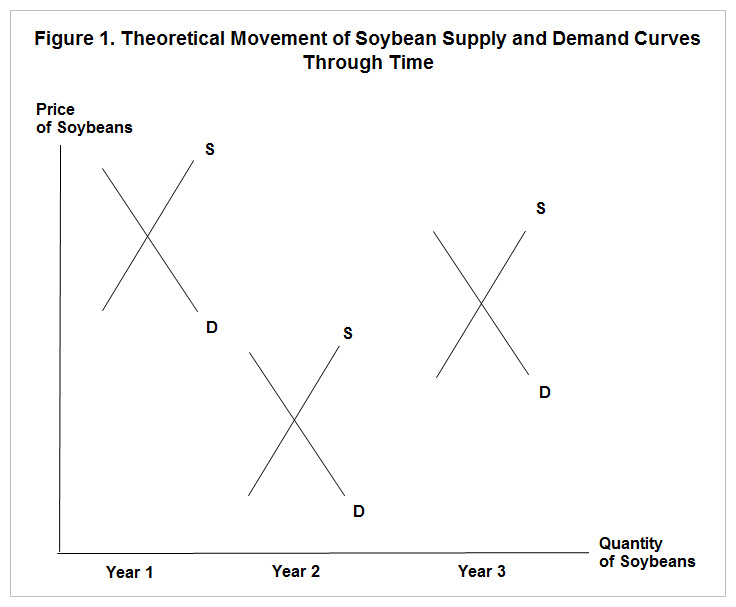 The average marketing year price and ending stock-to-use ratio for the period 1990-91 through 2014-15 is shown in Figure 2. For the current year (2014-15), the projection of year ending stocks and the mid-point of the range of the projected average farm average from the May 12 WASDE report is used. It is tempting to view the relationships in Figures 2 as an attempt at tracing out demand curves for soybeans; but, it should always be kept in mind that the individual price observations reflect the interaction of both supply and demand in each of the marketing years. This is the classic economic problem of identification, where a given price-quantity combination can be the result of the demand curve shifting, the supply curve shifting, or both. The stocks-to-use ratio is therefore only a proxy for the true relationship. 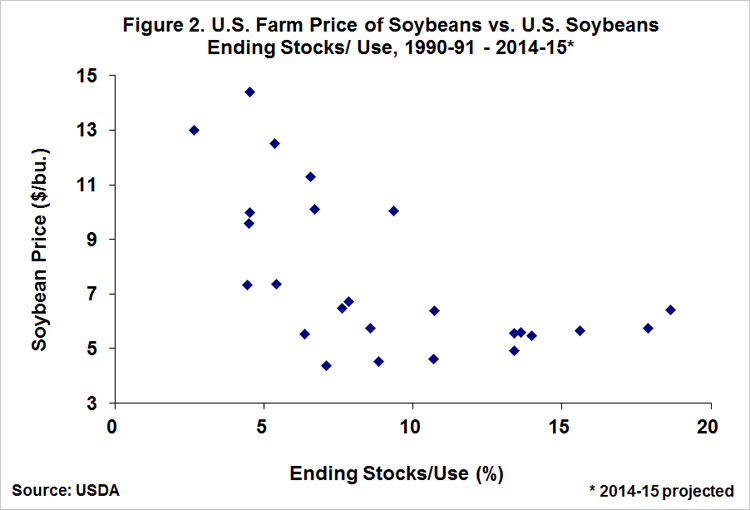 As expected, there is a general negative relationship between the stocks-to use ratio and the average farm price. That is, a low stocks-to-use ratio is associated with a high price and vice versa. It is clear, however, that the relationship is not especially strong over the entire time period. For example, note the very wide range of price outcomes for stocks-to-use ratios in the range of 5-7 percent. Nonetheless, we estimated the relationship between the average marketing year price and ending stock-to-use ratio using a reciprocal regression specification, so that: 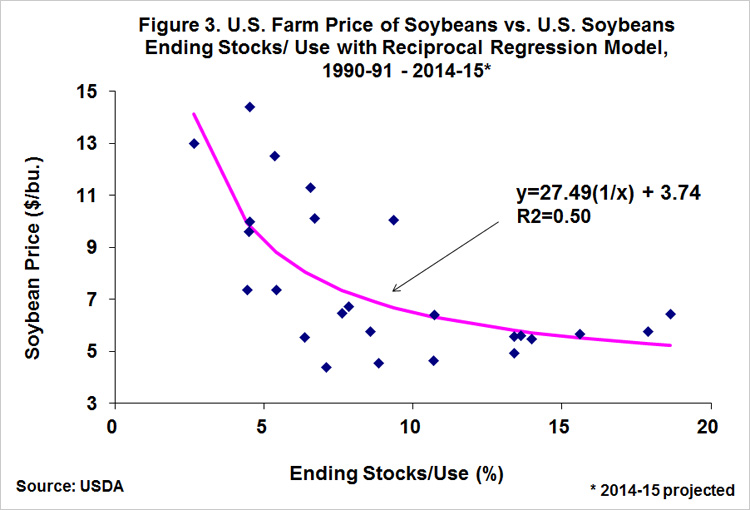 For corn, we argued that the relationship should be viewed in the context of two different eras. The first era in soybeans spans from 1990-91 through 2006-07 and consists of the lower price points in Figure 2. The second era spans from 2007-08 through 2014-15 and it contains the upper and more steeply sloped cluster of points in Figure 2. As we have argued for some time now (e.g., Irwin and Good, 2009; farmdoc daily, March 29, 2011; farmdoc daily, February 27, 2013), the two eras for soybeans represented in Figure 2 are mainly differentiated by the increase in biofuel production and the rapid increase in Chinese soybean imports that both began in 2007-08. That is, the outward shift in the demand curve resulted in higher prices, for a given level of supply, than was the case in the period prior to 2007-08. While the soybean supply curve likely did not shift at first, there was undoubtedly movement along the supply curve as higher prices resulted in expanded soybean acreage. The resulting large outward shift in the demand curve and movement along a relatively inelastic (price insensitive) supply curve meant that a stocks to-use ratio of a given magnitude was associated with a higher price in the latter era than in the former era. Given more time to adjust there has also undoubtedly been some rightward shifts in the soybean supply curve, but the available evidence suggests that the elasticity of acreage supply is fairly modest even in the intermediate- to longer-run.

Since U.S. soybeans must compete in the world market, it could be argued that U.S. soybean prices might better be explained by an expanded stocks-to-use ratio. We examined the relationship of the total world stocks-to-use ratio and U.S. farm price of soybeans (Figure 4) over the entire time period and found that the fit is “poor” and is counter-intuitive in that larger stocks-to-use ratios tend to be associated with higher prices. The lack of fit confirms the results reported by Carl Zulauf (farmdoc daily, March 13, 2015) based on observations only for the latter era from 2007 through 2014. 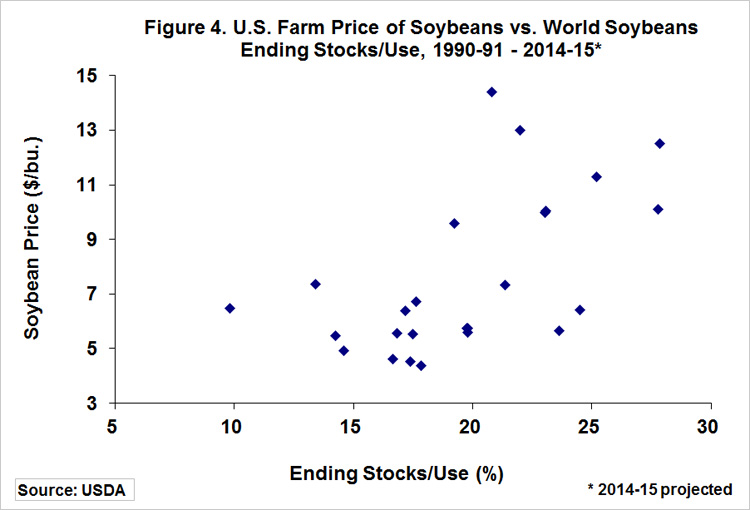 So, what might explain the poor fit between the stocks-to-use ratio and marketing year average farm price for soybeans? We submit that the following two factors should rise to the top of the list:

Parameter identification problem. In Wikipedia. Modified on 13 May 2015, at 20:07, and retrieved May 14, 2015, from http://en.wikipedia.org/wiki/Parameter_identification_problem