This article concludes a three-part farmdoc daily series on the 2014 farm bill and U.S. commitments on farm supports under the World Trade Organization (WTO). As noted in farmdoc daily July 30, 2015, the U.S. is unlikely to exceed its current WTO limit on farm support under the 2014 farm bill. In contrast, the U.S. is likely to exceed some limits in the 2008 WTO Doha Round proposal as the 2014 farm bill interacts with the large growth in U.S. crop insurance and changes in its notification at the WTO (farmdoc daily July 16, 2015 and July 30, 2015, respectively). While Doha negotiations are ongoing, nontrivial implications for U.S. farm policy are possible.

Costs and WTO notifications for crop insurance and some WTO terms used in this article (Aggregate Measurement of Support (AMS), Current Total AMS (CTAMS), de minimis thresholds, and green box) are discussed in farmdoc daily July 30, 2015. Information on the 2008 Doha farm support proposals are from the WTO negotiating document. For more information and explanations, see Blandford and Orden, and Schnepf.

The WTO Uruguay Round, which concluded in 1994, committed to new negotiations on agriculture to continue a process of “substantial progressive reductions in support and protection.” These talks started in 2000 and were folded into the Doha Round that began in 2001. Doha largely stalled when the WTO bi-annual ministerial meeting in July 2008 failed to reach agreement on a set of proposals resulting from 6-plus years of negotiations. The next ministerial meeting is December 15-18, 2015 in Nairobi, Kenya. Negotiating positions remain far apart but WTO Director General, Roberto Azevedo, has called on members to return to discussions in September “ready to negotiate on all fronts.”

The proposals substantively tighten constraints on U.S. farm policy. The limit on annual U.S. CTAMS would decline from $19.1 to $7.6 billion. Product-specific and non-product-specific de minimis thresholds, below which support does not count toward this limit, would decline from 5% to 2.5%. New restrictive caps on product-specific support would be instituted. A new limit of $14.5 billion would be set on “Overall Trade Distorting Support” — OTDS includes all support not in the green box, including, most importantly, spending less than de minimis levels.

Any Doha agreement likely will differ, probably notably, from the 2008 proposals. Not only have markets changed since 2008 but also policy in some countries. Besides the U.S., policy changes in China and India are often highlighted. The Organization for Economic Cooperation and Development (OECD) provides estimates of 2014 support for China but not India. OCED reports China’s 2014 government support payments for agriculture as $53.7 billion, compared to $33.4 billion in 2008. 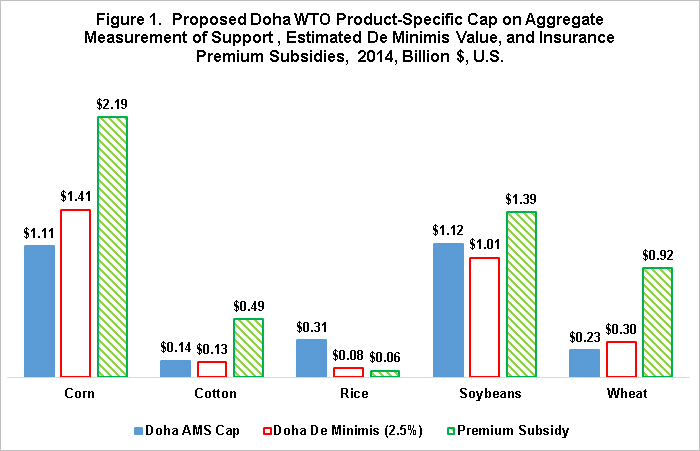 Current Total AMS Limit: Recent WTO notifications for U.S. sugar have been around $1.5 billion annually. The sugar program is largely the same in the 2014 and 2008 farm bills. Adding this sugar AMS to the AMSs for corn, cotton, soybeans and wheat (because they exceed their proposed product-specific de minimis thresholds) results in $6.5 billion of CTAMS. While below the Doha proposed U.S. CTAMS limit of $7.6 billion, only a little room remains in 2014 for other subsidies that exceed de minimis thresholds. More broadly, if 2014 is representative of years under the 2014 farm bill, this same situation would occur in future years.

Overall Trade Distorting Support Limit: OTDS includes all support not in the green box. For the 2014 crop year, $6.2 billion in insurance premium subsidies, $5.7 billion in projected ARC and PLC payments, and $1.5 billion in projected sugar market price support sums to $13.4 billion. While below the Doha proposed U.S. OTDS limit of $14.5 billion, again only a little room exists for increased spending on any program, even if support remains below the de minimis thresholds.

Flexibility under new green box rules: One approach to managing a potential breech of WTO limits is to reclassify support into a different category. Proposed Doha changes to the green box criteria may provide two flexibilities. First, crop insurance payments for which eligibility is “determined by a production loss which exceeds 30 percent of the average production in a period demonstrated to be actuarially appropriate” can be classified as green box. This provision may allow U.S. crop insurance subsidies for yield losses greater than 30% to be classified in the green box, thus reducing what is counted against support limits. A second proposed flexibility excludes from CTAMS, payments “that do not require production” if based on 85% or less of a fixed and unchanging base acreage and yields. Such payments would be classified in what is known as the “blue box.” PLC payments likely would qualify for this exemption. PLC payments would still count toward OTDS and would be subject to an overall blue box limit of $4.853 billion as well as product-specific blue box caps.