This article continues discussion of crop program decisions made by U.S. farms using sign up data released by FSA in June. Previous articles (June 16, 2015 and June 18, 2015) provided overviews of farmers’ program elections, and discussion of issues impacting program election and the base acreage updating decision. While 76.4% of all base acreage in the U.S. is enrolled in ARC-CO (Agriculture Revenue Program -County program), both articles noted that enrollment varies across program crops. This results in geographic variation in enrollment rates due to program crops being grown in different areas. Therefore, today’s article focuses on program enrollment by state for selected program crops. Specifically examined is the share of base acreage enrolled in the other major program of choice, PLC (Price Loss Coverage). PLC accounted for 22.8% of all U.S. base acreage. 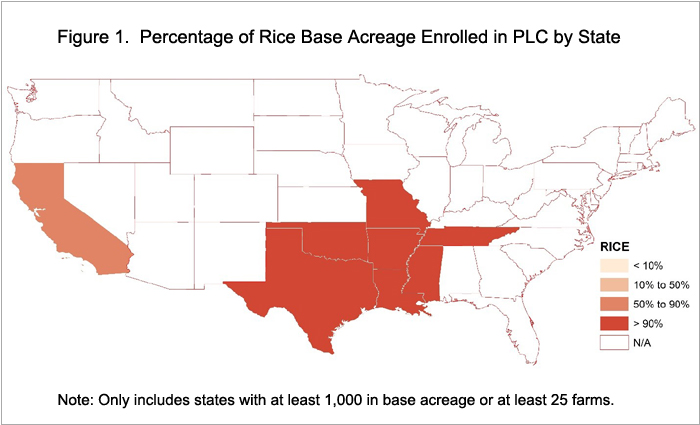 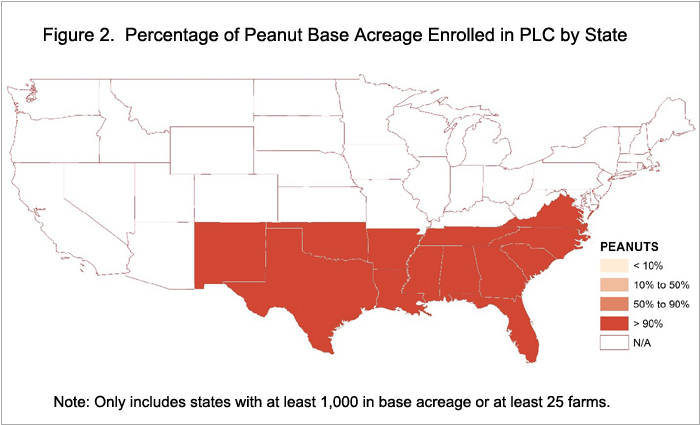 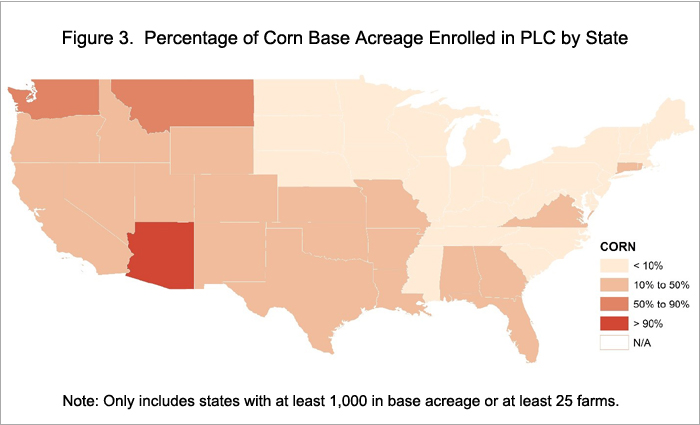 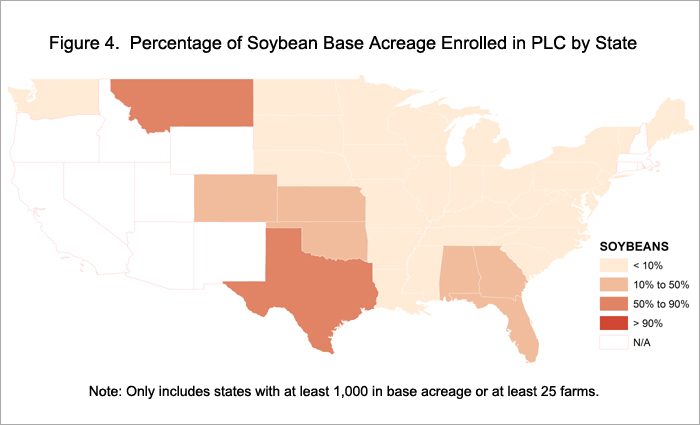 PLC enrollment was lowest in the main production regions of the Midwest for corn, and the Midwest and Southeast for soybeans. Since the majority of corn and soybean base acreage are located in these regions, the aggregate enrollment rates for corn and soybeans are highly skewed towards the ARC-CO program. For both crops, PLC enrollment rates were highest in the Mountain and Pacific Coast regions of the U.S. PLC enrollment rates were also well above the national average in states in the central, southern, and southeastern regions. Examples include Missouri (for corn), Texas, Oklahoma, Alabama, Georgia, and Florida. 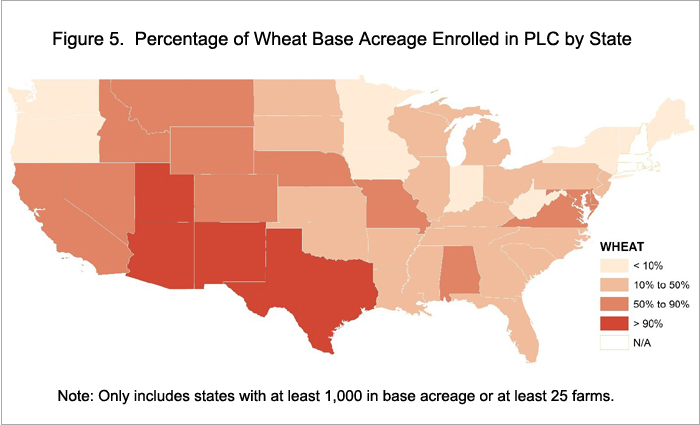 The high enrollment in PLC for rice and peanuts is most likely due to the high PLC reference prices for these crops relative to the initial ARC program price guarantees based on the Olympic average over the past 5 years. In contrast, the PLC reference price for corn and soybeans was set relatively low compared with the initial ARC program price guarantee, which likely explains the heavy enrollment in ARC for these crops. See the June 18 article for more discussion on the relative price issue.

For other crops with more evenly split enrollment rates between PLC and ARC, there a number of potential explanations for the regional variation. PLC enrollment does tend to be higher in Pacific Coast and Mountain regions. These areas tend to have more intensive use of irrigation for crop production, which can reduce yield variability. This might explain preferences leaning towards a price protection program such as PLC rather than revenue protection with ARC. PLC enrollment rates for most crops tend to be lower in the Midwest, where corn and soybeans are the dominant crops. Therefore, one could argue that program choice for all crops may have been driven by the choice made for the major crops in the region. These explanation should be interpreted with care since they are based on the aggregate enrollment data currently available.

Program enrollment decisions in the 2014 Farm Bill vary considerably across crops and regions. For crops like rice and peanuts, virtually all acreage is enrolled in the PLC program. In contrast, nearly all corn and soybean acreage is enrolled in the ARC program. For other crops, like wheat, enrollment is split more evenly between PLC and ARC. For these crops, quite a bit of variation in program enrollment exists across regions of the U.S. There are some possible explanations for this regional variation, but more detailed analysis with enrollment data is required.