Cash rent bids for 2016 may be influenced by commodity payments associated with the 2014 Farm Bill. Agricultural Risk Coverage with county coverage (ARC-CO) payments for 2016 are estimated for central Illinois. For corn, 2016 ARC-CO payments likely would average near $50 per base acre if the 2016 market year average (MYA) price is near $3.65 per acre. For soybeans, ARC-CO payments near $25 per base acre seem realistic given an $8.15 MYA price.

Program payments will be based on the elections made for a Farm Service Agency (FSA) farm in the winter of 2015. Payments will be made on base acres, not planted acres. If a cash rent bid is being prepared for a new farm, that farm’s program acres, program choices, and program yields (if in Price Loss Coverage) should be obtained to aid in estimating 2016 commodity program payments.

For 2016 production, ARC-CO payments will be based on 2016 county yields and 2016-17 MYA prices. For corn and soybeans, MYA prices will be determined from September 2016 to August 2017. Commodity program payments for 2016 production will be received in the autumn of 2017.

While not directly impacting 2016 cash rent bids, 2015 ARC-CO payments are calculated to aid in arriving at 2016 ARC-CO payments. ARC-CO payments are calculated using a Microsoft Excel spreadsheet entitled the ARC-CO PLC tool. It has county level database and is available for download here. Corn and soybean payments per base acres are given for McLean County, Illinois (see Table 1). These payments will be representative of many counties in the heart of the Corn Belt. Southern Illinois counties should reduce expected payments by about $10 per acre. 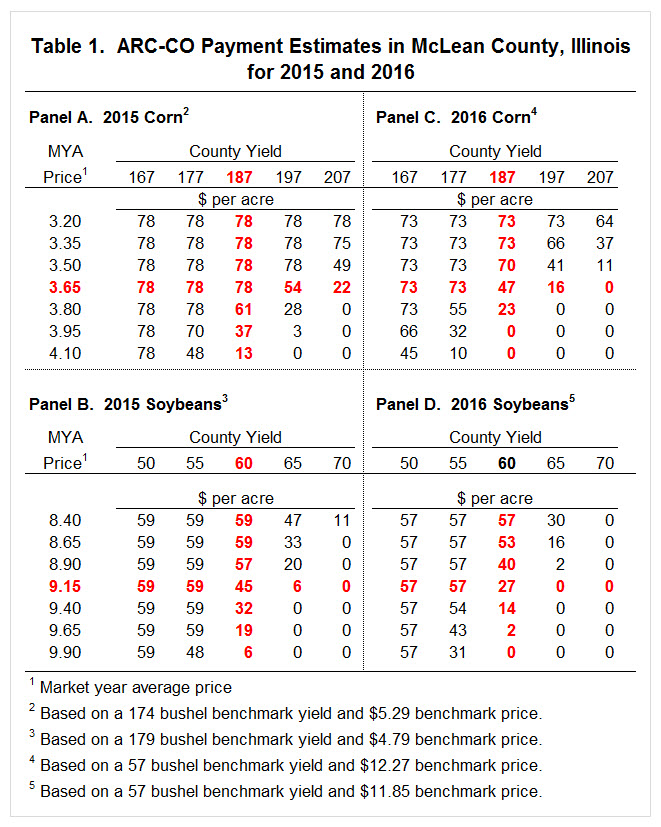 For 2015, midpoints of the August 12th World Agricultural Supply and Demand Estimates Report (WASDE) are used as MYA price estimates. These 2015-16 price midpoints are $3.65 per bushel for corn and $9.15 per bushel for soybeans. To estimate 2015 county yields, 2014 county yields are adjusted based on projected changes in state yields (200 bushel state yield in 2014 versus 172 bushel per acre estimate in 2015 for corn, 56 bushel state yield in 2014 versus 53 bushel per acre estimate for 2015, Crop Production, August 12, 2015). These adjustments for McLean County result in a 187 bushel per acre yield for corn and a 60 bushel yield for soybeans. Given these yields, ARC-CO payments would be $78 per base acre for corn and $45 for soybean. Overall, farmers can expect 2015 ARC-CO payment at current price expectations (see Panels A and B of Table 1). ARC-CO payments will be lowered if MYA prices increase. On the other hand, no ARC-CO payments should be expected if prices are above $4.00 for corn and $10.00 for soybeans.

For 2016, benchmark yields and prices are calculated based on the above described projected 2015 yields and prices. Panels C and D of Table 1 show corn and soybean ARC-CO payments for differing 2016 county yields and 2016 MYA prices. The discussion below centers on the 187 bushel county yield for corn and 57 bushel yield for soybeans, as these yields are close to expectations. At this point, there is no reason to deviate from expected yields. At these yields, the payments provide good ARC-CO estimates for different prices. No payments should be expected at high prices, and vice versa.