The biodiesel tax credit allows blenders of biodiesel (and renewable diesel) to claim a credit of $1 per gallon against their U.S. federal tax liability. The tax credit has expired four times since 2009 and then subsequently reinstated retroactively three times. The conditions where it does and does not make economic sense for blenders to share a retroactively reinstated tax credit with biodiesel producers were analyzed in a recent farmdoc daily article (July 22, 2015). Estimated supply and demand curves for 2015 indicated there is no economic rationale for blenders to share the credit with biodiesel producers if it is reinstated retroactively for 2015. A major change could be in the works starting in 2016. The Grassley-Cantwell amendment, passed by the U.S. Senate Finance Committee on July 21 2015, changes the biodiesel tax credit from a blender to a producer credit starting January 1, 2016. The purpose of today’s article is to explore the implications of this possible conversion for biodiesel producers, blenders, and fuel consumers.

The conceptual analysis uses the same model of the biodiesel market that was presented in the farmdoc daily article from July 22, 2015. The model assumes perfect competition and represents the supply of biodiesel producers and demand from diesel blenders at the wholesale level. Retail demand at the consumer level is implicitly represented by a simple percentage markup of the wholesale demand. The model also assumes that biodiesel demand is perfectly elastic (horizontal) for biodiesel prices equal to ultra low sulfur diesel prices. This reflects an assumption that biodiesel and diesel are perfect substitutes and that biodiesel is a small enough part of the diesel market that changes in the biodiesel price do not impact the overall demand for diesel fuel. One could go further and adjust biodiesel prices to reflect the lower energy content of biodiesel (about 12% lower) compared to petroleum diesel. However, given the low biodiesel blends typically used in the marketplace today (e.g., B2 or B5), it is doubtful that this lower energy content is priced at the retail level. Furthermore, a growing portion of “biodiesel” consumption in the U.S. is in the form of renewable diesel that has the same energy content as petroleum diesel (farmdoc daily, December 13, 2013). So, we assume no adjustment is necessary for energy content. We also do not explicitly consider imports and exports of biodiesel in this conceptual model. 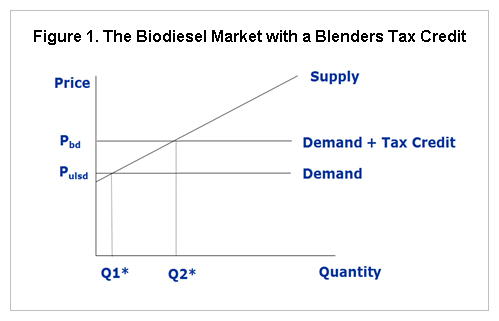 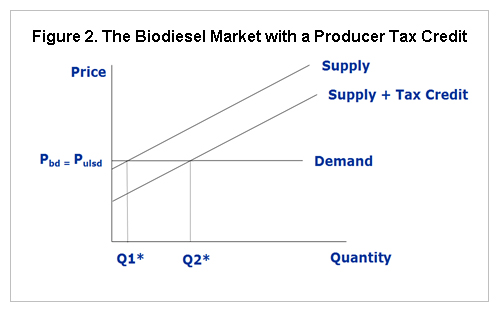 The next step is to consider a policy scenario with both a producer biodiesel tax credit and a volume mandate. Figure 3 shows a scenario with a producer tax credit and a binding volume mandate. A producer tax credit with a non-binding mandate has similar impacts to a producer tax credit only, and therefore, will not be presented here (see the farmdoc daily article on July 22, 2015 for further details in the case of a blender credit). The mandate is binding in Figure 3 because it requires a higher level of production than under a tax credit alone (Q2M>Q2*). In order to incentivize the higher production, biodiesel producers must be paid a price that is higher (Pbd) than the wholesale diesel price (Pulsd). However, the biodiesel price paid to producers is lowered by $1 per gallon due to the tax credit, as reflected in the downward shift in the supply curve. From the perspective of a diesel blender, there is still a wedge between the price paid to biodiesel producers and the price charged to retailers (consumers) for the biodiesel in diesel blends. This wedge, or loss, is the wholesale diesel price minus the biodiesel price at the mandated quantity. Under these assumptions, sharing provisions in marketing contracts are irrelevant because a binding volume mandate cannot be imposed retroactively (at least in theory).

We can now turn from a purely conceptual analysis to making specific estimates for 2016, when the biodiesel tax credit could be changed to a producer credit. Figure 4 presents estimated supply and demand curves for biomass-based diesel in 2016. The upper supply curve is the same as the supply curve used in the analysis of the blender tax credit in the July 22, 2015 farmdoc daily article (see Figure 5 in the article). This supply curve represents the combined domestic and import responsiveness of conventional biodiesel as well as renewable diesel (see the farmdoc daily article on December 13, 2013 for details). Average weekly values for key variables from January through mid-July 2015 were used to project variables for the entire 2015 calendar year for that analysis. The same projections for 2016 are reasonable given available data. In a like fashion, the 2016 demand curve is simply the horizontal curve given by the average level of the wholesale diesel prices to date in 2015, $1.73 per gallon. Given the simplicity of the model and estimation methods, the derived supply and demand curves should be viewed as useful approximations rather than highly reliable estimates. 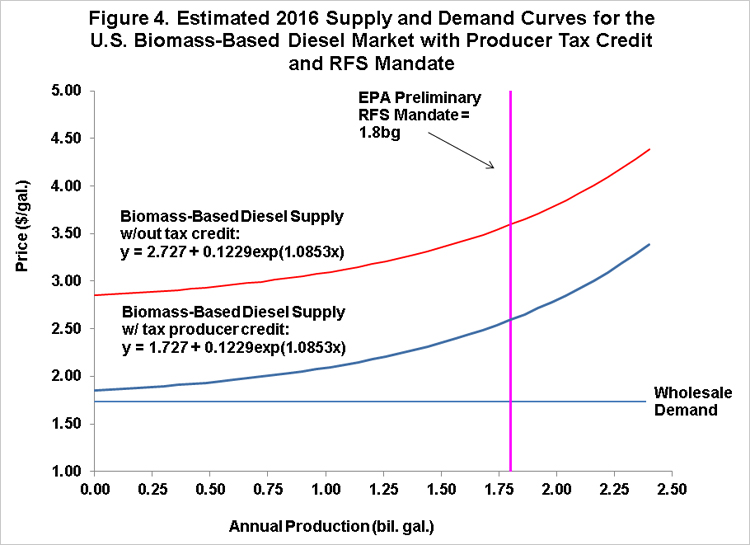 The lower supply curve in Figure 4 simply shifts the supply curve down by $1 per gallon at each level of biodiesel production in order to reflect a producer biodiesel tax credit. Even with the incentive provided by the tax credit, the estimated supply and demand curves indicate the equilibrium quantity of biodiesel (both conventional and renewable) in Figure 4 is zero because the demand curve does not intersect the supply curve with the credit at any positive quantity. Given this situation, it is obvious that the (preliminary) 2016 RFS volume mandate of 1.8 billion gallons dominates the producer tax credit in terms of stimulating biodiesel production. Of course, there is a point where lower soybean oil or higher wholesale diesel prices will make the tax credit dominant in terms of stimulating biodiesel production. To reach the point where the producer tax credit is equal to the RFS mandate in quantity terms the soybean oil price would have to fall from $0.32 to $0.21 per pound or the wholesale diesel price would have to rise from $1.73 to $2.59 per gallon. Price movements of these magnitudes seem unlikely.

There is another impact of changing the biodiesel tax credit to a producer tax credit that is not reflected in Figure 4. As noted above, the supply curves represent the combined domestic and import responsiveness of conventional biodiesel as well as renewable diesel. The Grassley-Cantwell amendment recently approved by the U.S. Senate Finance Committee limits the tax credit to conventional biodiesel and renewable diesel produced in the U.S. Under previous legislation, the tax credit could be applied to biodiesel blended in the U.S. regardless of whether the biodiesel was produced in the U.S. or imported. Some evidence on the importance of this potential change is found in Table 1, which presents D4 biodiesel and D6 ethanol RINs generation net of error corrections for 2012-2015. Imported RINs are the sum of imported and foreign generated RINs. RINs generation for 2015 is estimated by annualizing January-June 2015 generation.

The available data suggest that changing the biodiesel tax credit to a U.S. producer only credit could have sizable impacts on the supply of biodiesel. The 500 million gallons of biodiesel imported into the U.S. in recent years would be subject to what is effectively a $1 per gallon import tariff. The possible economic impacts are illustrated in Figure 5. The middle supply curve subtracts 0.26 billion gallons of quantity for each price, which is roughly the amount of conventional biodiesel and renewable diesel imports through the D4 channel in recent years. Conventional biodiesel and renewable diesel imports through the D6 channel are not incorporated because the first (top) supply curve did not take into account these volumes in the original analysis (farmdoc daily, December 13, 2013). The main economic impact would once again be redistributive. Whether the tax credit is a producer or blender credit, the RFS mandate is highly likely to remain binding. So, the leftward shift of the supply curve relative to the lowest curve simply implies that more of the cost of complying with the RFS biodiesel mandate would be shifted from taxpayers to consumers. While seemingly small on the graph, the shift in Figure 5 represents $0.33 per gallon of biodiesel, a non-trivial amount. The restriction of biodiesel imports could have a much larger impacts on compliance costs for the RFS in future years if the degree of “push” above the E10 blend wall signaled in the EPA’s latest proposal (farmdoc daily, June 17, 2015) has to be met to a significant degree by biodiesel RINs generation. 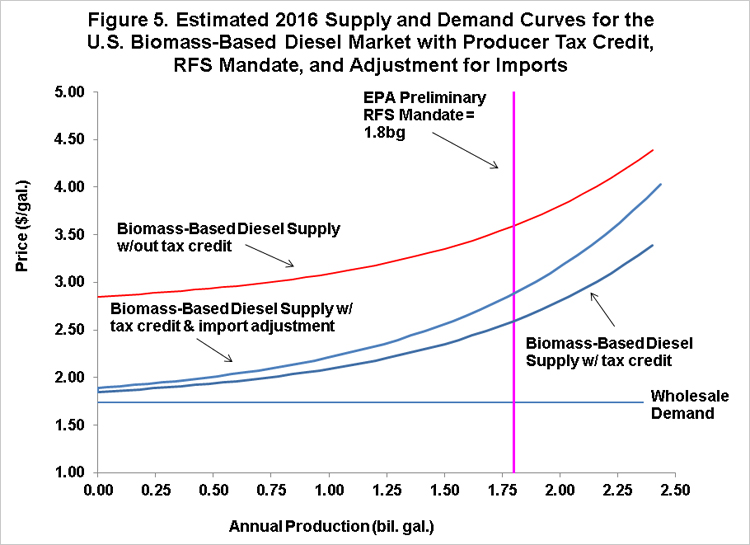 A major change for the $1 per gallon biodiesel tax credit could be in the works starting in 2016. The Grassley-Cantwell amendment, passed by the U.S. Senate Finance Committee on July 21 2015, changes the biodiesel tax credit from a blender to a producer credit starting January 1, 2016. The analysis here indicates that it would never make economic sense for biodiesel producers to share with blenders a producer tax credit that is reinstated after the fact. The reason is that the blender pays the same price for biodiesel–the wholesale diesel price–whether or not the tax credit is place at the time of the transaction. The biggest impact of a change to a producer biodiesel credit is likely to be on biodiesel imports. The Grassley-Cantwell amendment limits the tax credit to conventional biodiesel and renewable diesel produced in the U.S. Under previous legislation, the tax credit could be applied to biodiesel blended in the U.S. regardless of whether the biodiesel was produced in the U.S. or imported. In recent years, about 500 million gallons of conventional biodiesel and renewable diesel have been imported annually into the U.S. and used to generate RINs for RFS compliance. The change to a producer tax credit would make these imports ineligible for the tax credit, and therefore, effectively subject to a $1 per gallon import tariff. This would restrict the total supply of biodiesel in the U.S. and shift a non-trivial amount of the cost of complying with the RFS biodiesel mandate from taxpayers to consumers.