Of the direct costs for corn, per acre seed costs on a percentage basis increased the most between 2006 and 2014, increasing by 164% percent (farmdoc daily September 1, 2015). This article provides perspective on these seed cost increases, indicating that higher than usual cost increases occurred from 2006 to 2009. Perspectives also are provided based on seed costs per bushel produced and seed costs as a percent of corn revenue. Commentary on potential seed costs decreases and impacts on seed companies then is provided. 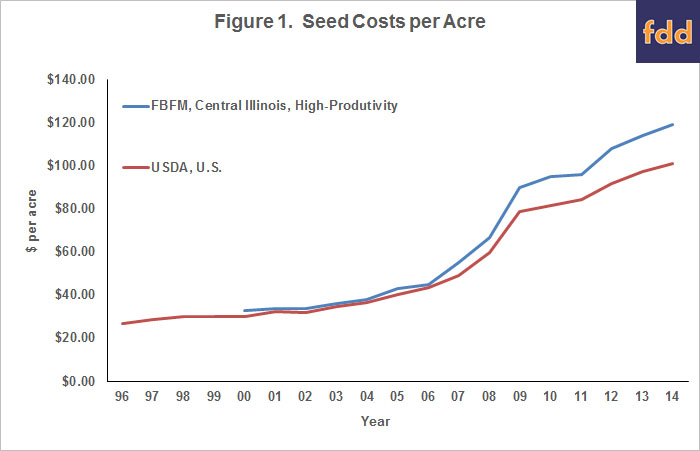 These costs come from two independent sources having different data collection methods. As can be seen in Figure 1, per acre seed costs from FBFM and USDA follow each other closely. The correlation coefficient between the two series is .99.

The period of double-digit seed cost increases corresponds to an increase in the long-run average level of corn prices. From the mid-1970s to the mid-2000s, corn prices average about $2.40 per bushel. In the mid-2000s, corn use in producing ethanol increased, resulting in an overall corn price increase. While $2.40 per bushel was the average before 2006, a more reasonable estimate of the long-run price after 2006 is $4.60 per bushel. Of course, there has been and will continue to be variability around those long-run prices (farmdoc daily February 27, 2013). 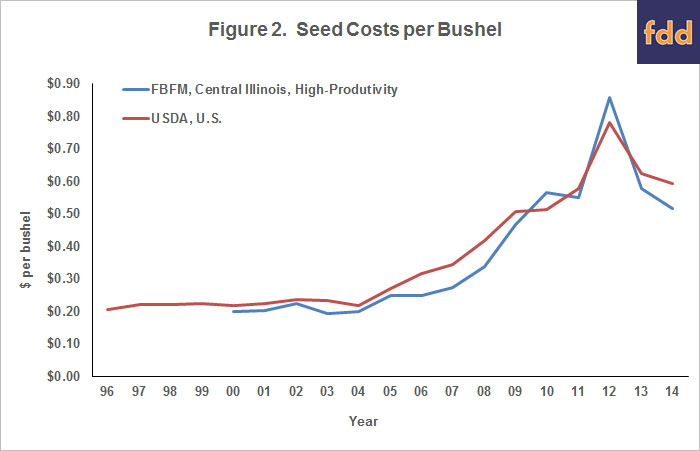 Seed Costs as a Percent of Corn Revenue 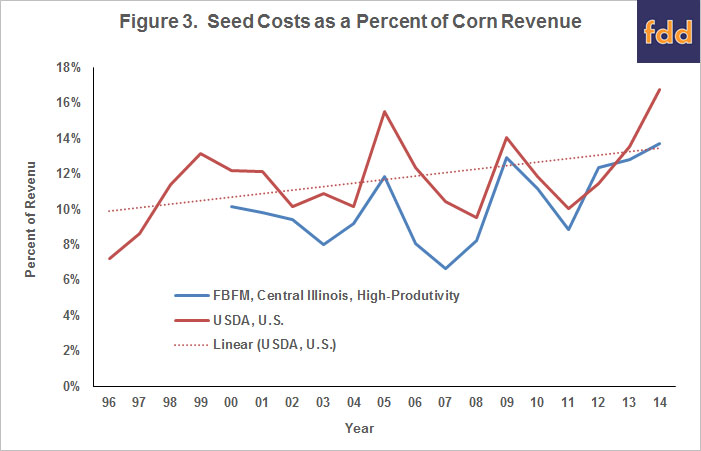 Overall, seed costs have increased on a per acre basis, on a per bushel produced basis, and on a percent of corn revenue basis. As the need to reduce non-land costs continues, seed costs is one area requiring examination (farmdoc daily September 1, 2015; August 4, 2015). Moreover, seed cost control becomes more important as the percent of corn revenue devoted to seed increases. Means of reducing seed costs within farmers’ management discretion are somewhat limited. Farmers can purchase lower priced hybrids, with the concern that lower yields will result. Farmers can also potentially reduce seeding populations. However, large seed costs reductions are not possible without one or more seed company significantly reducing seed prices.

While the seed costs shown in the above figures represent costs to farmers, these seed expenditures are revenues to seed companies. Seed cost increases, along with more acres devoted to corn, resulted in growing revenues to seed companies in the past decade. Investors in publically traded companies tend to desire companies that have revenue growth prospects. Rates of seed costs increases have slowed, leading to prospects of more modest revenue growth for the next several years. Lower growth may be one factor leading to the merger and acquisition discussions between major seed technology companies within the past several months, with mergers potentially leading to growth for the combined company. As this time point, this appears to be the major strategy being contemplated for continuing seed revenue growth. A strategy of lowering seed prices to attract more seed sales does not appear to be being attempted.