A recent farmdoc daily article (August 19, 2015) documented that real (inflation-adjusted) prices of crude of oil and gasoline have recently fallen all the way back to levels prevailing more than a decade ago. Real crude oil prices near $20 per barrel and real gasoline prices near $1 per gallon (1982-84 $) have major consequences for not only the U.S. economy, but the entire global economy. The purpose of today’s article is to provide further longer-term perspective on energy prices by considering the inflation-adjusted price of natural gas.

Figure 1 presents both nominal and real monthly spot prices for natural gas at the Henry Hub in Louisiana over January 1997-October 2015. The Henry Hub spot price series is collected by the EIA and found here. Real prices are computed by dividing nominal prices by the U.S. Consumer Price Index (CPI) for all urban consumers, which can be found here. The base for the CPI is 1982-1984=100, which means that computed real prices are stated in terms of average prices over the 1982-1984 period. Another way of saying the same thing is that prices are adjusted to a constant purchasing power in terms of 1982-1984 dollars. It is important to note that a different base period will result in different computed real prices. 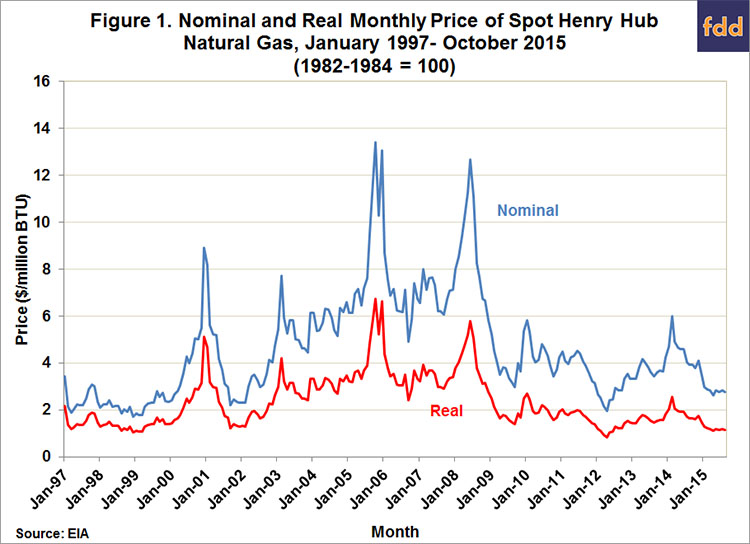 The first thing to notice in Figure 1 is the spiky nature of natural gas prices, whether in nominal or real terms. There spikes tend to occur in the winter months and correspond to particularly cold winters that boost natural gas usage. There are exceptions, such as the spikes in October 2005 and June 2008. The other notable feature is just how low real natural gas prices have plunged in recent years. The lowest real price over the sample period, $0.85 per million BTU, occurred in April 2012. The real price of natural gas did rebound after 2012, but the current price, near $1.15, is just barely above the lows of the late 1990s. It is no secret why the real price of natural gas is so low–fracking. This is short-hand for a production technique known as hydraulic fracturing, which is the use of liquids forced into deep rock formations to “crack open” previously unreachable deposits of natural gas. The application of hydraulic fracturing and horizontal drilling techniques in shale rock formations has had a dramatic impact on the supply of natural gas, and not surprisingly, the large increase in supply has kept a lid on natural gas prices. 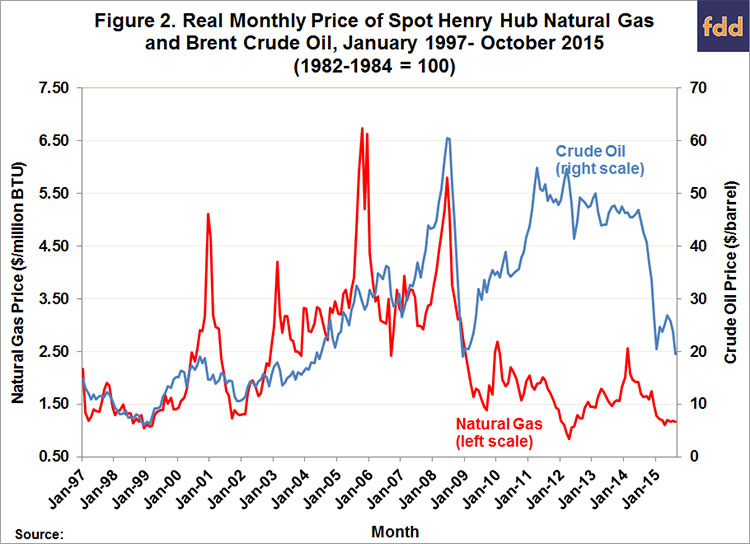 The low real price of natural gas has been and will continue to have major impacts on production costs of energy-intensive production processes. One example is shown in Figure 3, which presents estimates of the weekly natural gas cost (nominal) at a representative Iowa ethanol plant over January 26, 2007 through November 6, 2015. The model of a representative Iowa ethanol plant has been used to track the profitability of ethanol production the last several years in numerous farmdoc daily articles on ethanol markets and policy (see the article on March 5, 2015 for details). Natural gas costs reached a high $0.37 per gallon in July 2008 and have declined steadily, to the point where costs per gallon are now less than $0.10. For some perspective on what this means for the bottom-line of the ethanol industry, consider the drop in the average natural gas cost of $0.17 in 2014 to the average (to date) in 2015 of $0.11. Applying the $0.06 savings to the expected 2015 production of ethanol of 14.4 billion gallons results in a total cost saving to the ethanol industry of $1.6 billion. 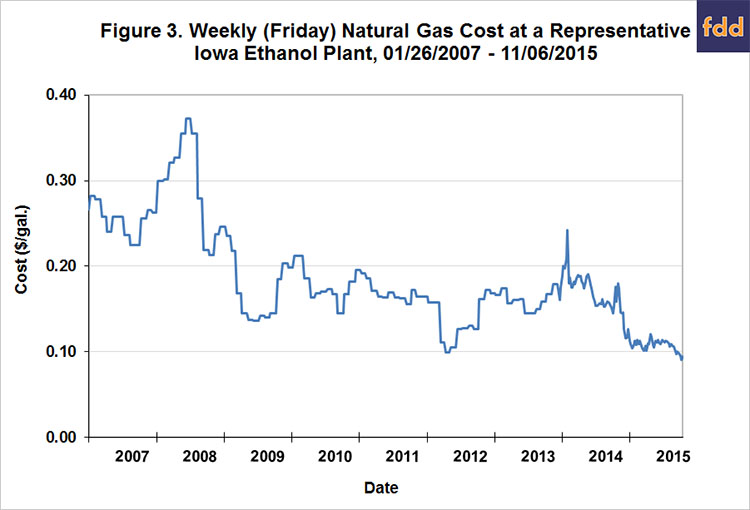 Real (inflation-adjusted) prices of natural gas have plunged in recent years and are now back to the levels of the late 1990s. To gain some perspective on just how low real natural gas prices have sunk, consider that real crude oil prices would have to decline from the current level of about $20 per barrel to well under $10 per barrel just to catch up. The low real price of natural gas has been and will continue to have major impacts on production costs of energy-intensive production processes. As just one example, we estimate that the drop in natural gas prices in 2015 alone will save the ethanol industry about $1.6 billion.

Hydraulic fracturing. In Wikipedia. Last modified on November 12, 2015, at 07:18 and retrieved November 13, 2015 from https://en.wikipedia.org/wiki/Hydraulic_fracturing