The EPA released the final rulemaking for 2014-2016 RFS standards on Monday, November 30. This release follows preliminary rulemaking released on May 29 of this year. Figures 1 and 2 are based on continuous series of daily 2014 vintage D4 biodiesel and D6 ethanol RINs prices through the close of trading on Wednesday, December 2, and they demonstrate that the final standards were a major shock to the RINs market. In the three trading days since the EPA announcement, the price of D4 biodiesel RINs jumped $0.20 per gallon, or 31 percent, and the price of D6 ethanol RINs increased $0.39 per gallon, or 92 percent. Except for a brief spike in January 2015, the Wednesday price for a 2014 vintage D6 RINs, $0.8075 per gallon, is the highest since August 2013. Equally impressive, the D6/D4 price ratio rose from 0.66 to 0.97 over these three trading days. Since RINs prices represent the marginal cost of complying with RFS mandates, it is important to understand why such large changes occurred. The purpose of this article is to provide an explanation for the recent spike in RINs prices. We begin by delving into the details of the 2014-2016 RFS volume requirements in the November 30 final rulemaking. 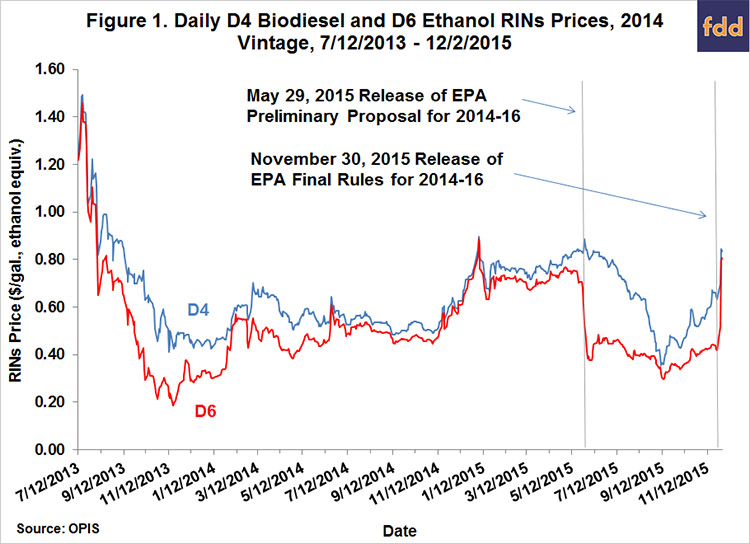 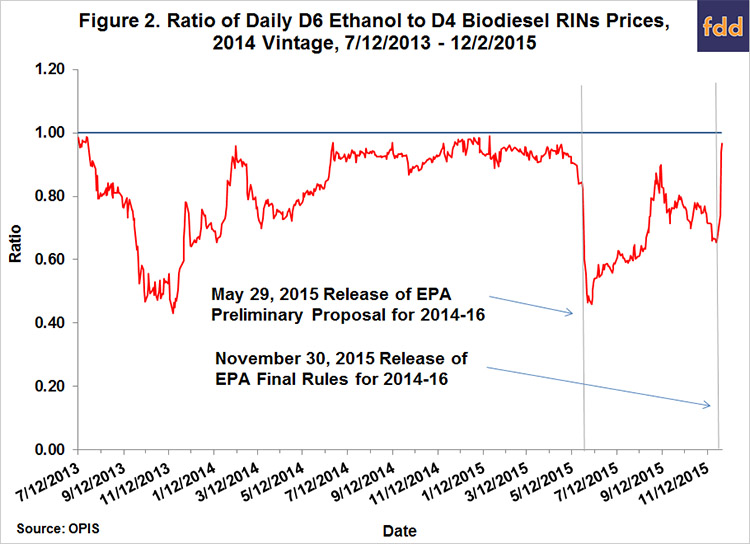 The RFS statutes require the EPA to establish biofuel volume requirements in four categories for each year from 2008 through 2022: cellulosic biofuel, biomass-based diesel (BBD), total advanced biofuel (which includes BBD), and conventional biofuel. The difference between the total advanced mandate and the total of the cellulosic and biodiesel mandate is referred to as the undifferentiated advanced mandate and can be satisfied by a combination of qualified advanced biofuels. Conventional biofuel is generally assumed to be corn-based ethanol but this is actually not explicitly required by the RFS legislation. Instead, corn-based ethanol has been the cheapest alternative for this category that also meets the environmental requirements of the RFS. For ease of discussion, however, we will refer to conventional biofuel as conventional ethanol. In addition, the conventional portion of the mandate can also be satisfied with discretionary blending of advanced biofuels, so we refer to the conventional mandate as an implied mandate 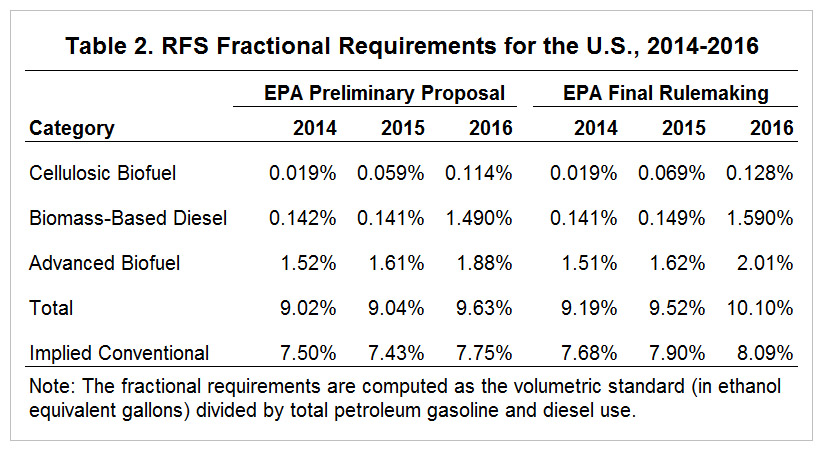 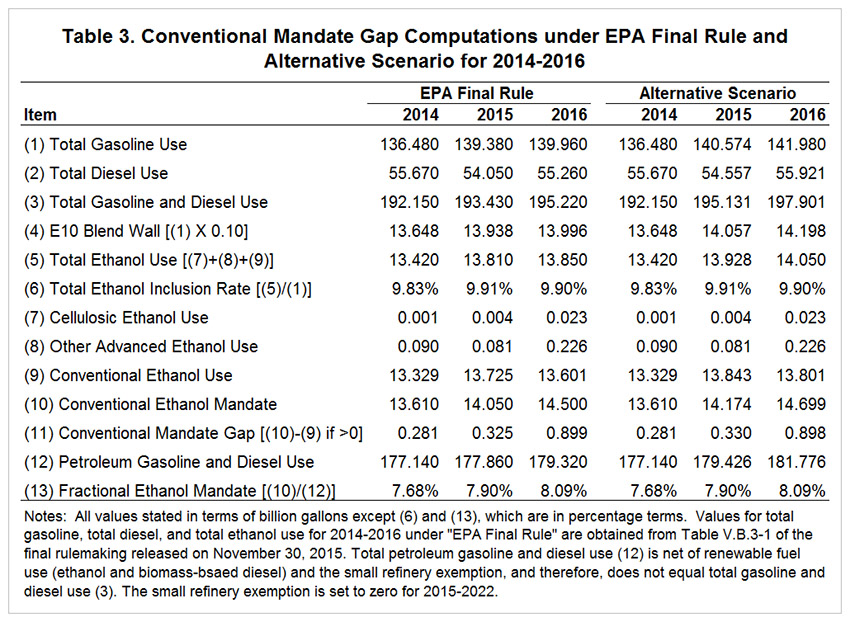 Explaining the Spike in RINs Prices

The review of EPA’s final rulemaking for 2014-2016 in the previous section strongly suggests that that the EPA is committed to pushing RFS standards for conventional ethanol past the E10 blend wall and “getting the RFS back on track.” The language in the final rulemaking suggests it would not be surprising if the EPA returned the conventional ethanol mandate back to the statutory level of 15.0 billion gallons as soon as 2017. To understand what this policy trajectory implies for RINs prices, we need to first review a conceptual model of ethanol RINs pricing that we have used several times in the past to understand the “message” from the RINs markets (e.g., farmdoc daily, August 8, 2014; May 28, 2015; September 23, 2015). The model is presented in Figure 3 and represents the supply of ethanol producers and demand from gasoline blenders at the wholesale level on an annual basis. Complete details on the model can be found in the farmdoc daily article from September 23, 2015. One key assumption of the model is that higher ethanol blends, such as E15 or E85, cannot be deployed in a cost-effective manner in the short-run, which leads to the perfectly inelastic segment of the demand curve at the E10 blend wall. 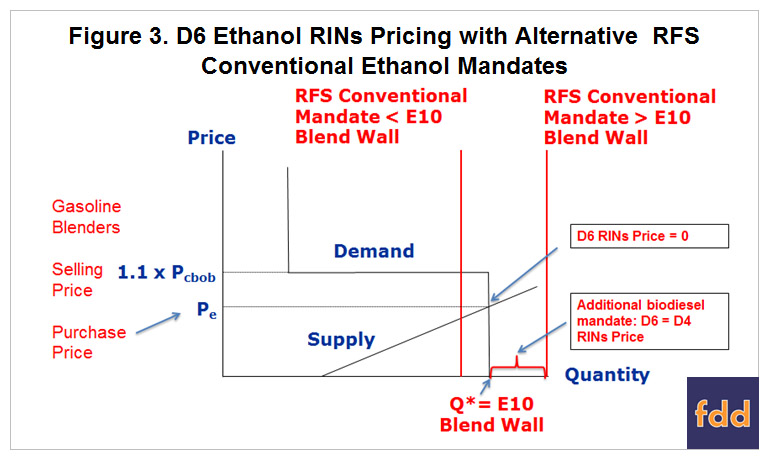 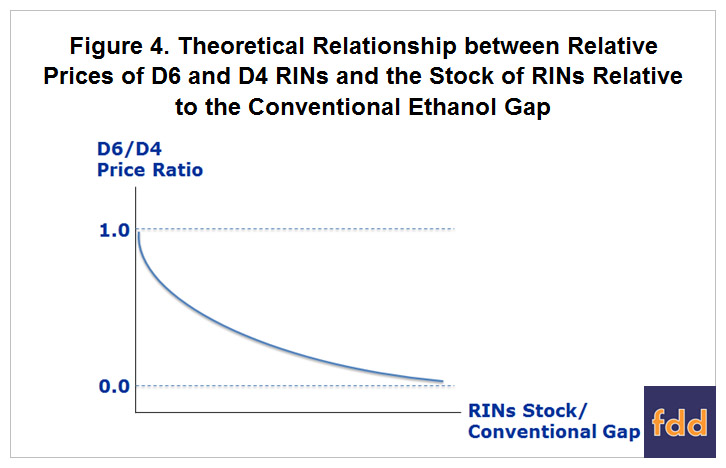 With this conceptual framework in hand, we can examine the factors driving the recent spike in RINs prices. The first step is to explain the dramatic rise in D6 prices relative to D4 prices since release of the final EPA rulemaking. A key insight from the conceptual framework represented by Figures 3 and 4 is that the D6/D4 price ratio should be a function of how quickly RINs stocks are expected to be exhausted by the cumulative conventional gap. Expectations that stocks will be exhausted soon should result in a relatively high price ratio and vice versa. Referring back to Figure 2, one can see that the D6/D4 price ratio has been highly volatile since the EPA’s preliminary rulemaking for 2014-16 was released at the end of May 2015. The ratio plunged below 0.50 immediately after release of the preliminary rulemaking, rose briefly back to 0.90 in early September, and then drifted back down to about 0.65 right before the final rulemaking was released. This suggests market participants views about how long RINs stocks would last changed considerably throughout this time period (see the farmdoc daily article on September 23, 2015 for further details). The rapid move back to a D6/D4 price ratio of 0.97 following the release of the final rulemaking provides strong evidence that market participants dramatically revised their projection of when the stock of RINs would be exhausted. A price ratio this close to one suggests that market participants now believe that RINs stocks will be exhausted very quickly due to the magnitude of the conventional gap in 2016 and the likely trajectory of substantial conventional gaps after 2016.

As noted earlier, the EPA estimates RINs stocks available for 2014-16 compliance at 1.74 billion gallons. The estimated conventional gap of 899 million gallons in 2016 would cut this stock level by slightly more than half to 841 million gallons. There are two considerations that may make this closer to a “stock out” than it appears to the casual observer. First, like any other commodity, there is a minimal, or “pipeline,” level of RINs stocks that reflect the need of obligated parties to have an inventory of RINs on hand to facilitate compliance or trading with others. In grain markets, the pipeline level of stocks is generally assumed to be 2-3 percent of total use. The total RFS standard for 2016 is 18.11 billion gallons and this benchmark from the grain markets would place the pipeline stock of RINs between about 350 and 550 million gallons. From this perspective, there might be only 300-500 million gallons of RINs stocks above pipeline levels at the end of 2016. Second, the EPA noted in its final rulemaking that their current estimate of the stock of RINs, 1.74 billion gallons, may be too high given uncertainties about compliance demonstration for 2012 deficits that have yet to be resolved and ongoing enforcement activities that may further reduce the number of valid RINs. A reasonable conclusion, therefore, is that the margin between pipeline and ending stocks of RINs in 2016 could easily be only a few hundred million gallons. When combined with an expectation that the conventional mandate gap will be of a similar size or perhaps even larger in 2017, one can understand why market participants now expect the stock of RINs to be exhausted in a matter of months rather than years.

The second step in the analysis is to explain the sharp increase in D4 biodiesel RINs prices since release of the final EPA rulemaking on November 30. Figure 1 shows that the price of D4 RINs jumped $0.20 per gallon, or 31 percent, in the three trading days following the release. There was a modest increase of 100 million gallons, or about five percent, in the 2016 and 2017 biomass-based diesel mandates in the final rulemaking. While this should result in higher biodiesel and renewable diesel prices, and consequently, higher D4 prices all else constant, the price increase relative to the mandate increase implies an extremely inelastic supply relationship. For this reason, other factors are likely to be at work. One factor almost surely is the biodiesel and renewable diesel production that will be needed to backfill the conventional gap once the stock of RINs is depleted down to pipeline levels. Consider that a one billion gallon conventional gap requires the production of almost 400 million gallons of biodiesel and renewable diesel. Another likely factor is the possibility that the biodiesel tax credit will be converted from a blender to a producer credit in 2016 (see the farmdoc daily article on August 5, 2015 for details), which would effectively place a $1 per gallon import tariff on imported biodiesel and renewable diesel. This would, in all likelihood, restrict the total supply of biomass-based diesel by eliminating biodiesel and renewable diesel imports to the U.S. We noted earlier that these non-ethanol imports have played an increasingly larger role in filling the conventional mandate gaps in recent years.

A final interesting observation is that the present spike in RINs prices is basically a re-run of the first instance of skyrocketing RINs prices in 2013 (farmdoc daily, July 19, 2013). We used the same conceptual model of the ethanol market to show that the spike in D6 RINs prices to $1.45 per gallon in 2013 reflected a large conventional gap created by the 2013 ethanol mandate exceeding the E10 blend wall. The model predicted that the gap effectively became additional biodiesel mandate, which in turn meant that the price of a D6 ethanol RINs should equal the price of a D4 biodiesel RINs. This prediction was borne out by RINs market price movements in 2013 just as it has been in the days since the release of the EPA’s final rulemaking for 2014-16.

The release of the EPA’s final rulemaking for 2014-16 RFS standards was a major shock to the market. The price of D4 biodiesel RINs went up 30 percent and the price of D6 ethanol RINs increased over 90 percent in the three trading days following the release. The market was apparently surprised by how much the final conventional ethanol mandates, particularly in 2016, breached the E10 blend wall. In addition, the final rulemaking clearly signaled that the EPA is serious about getting “the RFS back on track,” and it would not be surprising if the EPA set the conventional ethanol mandate at the statutory level of 15.0 billion gallons as soon as 2017. The prospect of large conventional mandate gaps versus the E10 blend wall evidently shifted the expectation of market participants from one where the existing stock of RINs would not be exhausted for years to one where the stocks could be exhausted in a matter of months. When the stock of RINs is exhausted, the conventional gaps have to be filled by higher ethanol blends, such as E15 and E85, or biodiesel and renewable diesel. Our theoretical model predicts that the price of a D6 ethanol RINs should equal the price of a D4 biodiesel RINs if biodiesel and renewable diesel are the only feasible options for filling conventional mandate gaps. Consequently, the move of D6 RINs prices to nearly the same level as D4 RINs prices in the days following the November 30 release is an unmistakable sign that the market believes higher ethanol blends are not a feasible source of RINs to fill conventional gaps. Instead, biodiesel and renewable diesel are perceived to be the only viable options for filling the expected conventional gaps. It will be interesting to follow whether this expectation is borne out going forward. The cost of complying with the RFS mandates and impacts on feedstock markets may well depend on the answer.

Irwin, S. "Rolling Back the Write Down of the Renewable Mandate for 2014: The RINs Market Rings the Bell Again." farmdoc daily(4):148, Department of Agricultural and Consumer Economics, University of Illinois, August 8, 2014.