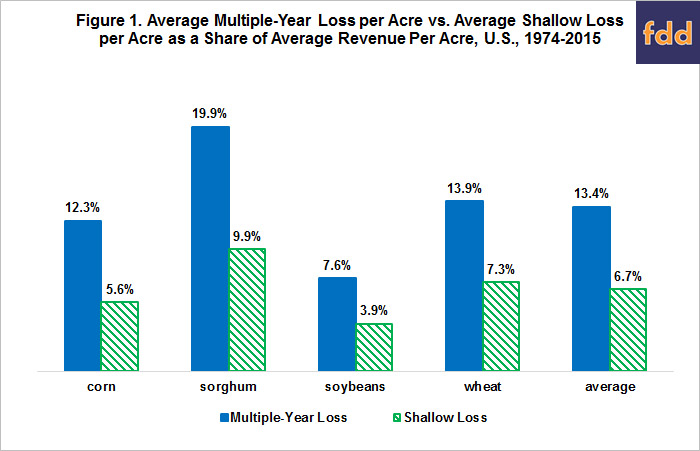 Overlapping payments (double payments for the same event) undermine the fairness of a program and thus the general public’s support for it. Overlapping payments by ARC-CO and insurance are difficult to estimate in advance since the 2 programs use different procedures and data to calculate assistance. To illustrate, insurance uses futures prices and farm level yields; ARC-CO uses U.S. crop year prices and county yields. Nonetheless, overlapping payments can occur. However, a simple, transparent approach exists to minimize overlapping payments because ARC-CO has a 10% percent cap on per acre payment and because individual insurance highest coverage level is 85%. Specifically, limit ARC-CO payments to years in which its benchmark price exceeds the insurance plant price for a given program crop. Such a modification reduced estimated indicated payments by ARC-CO for all crops analyzed: barley, corn, oats, sorghum, soybeans, and wheat (see Figure 2). The reduction ranges from 13% for corn to 34% for oats. If all base acres are assumed to be in ARC-CO, total spending on ARC-CO for these 6 crops is estimated to decline by 17% (see Figure 3). Our analysis suggests these savings would pay for an increase in ARC-CO’s coverage level to 90%. 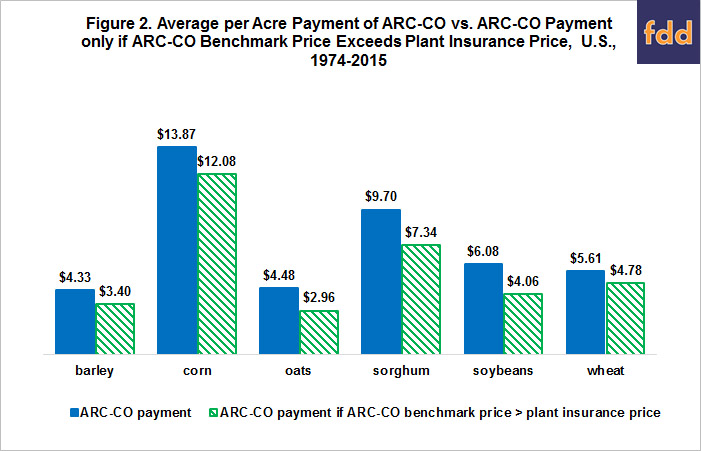 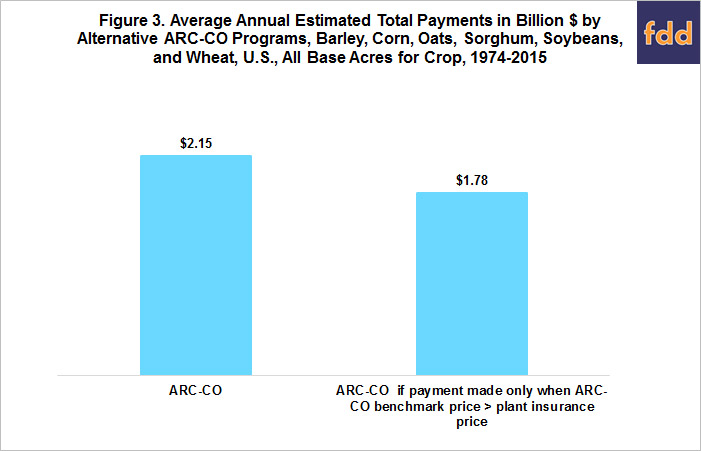 ARC-CO payments (alternatively, ARC-CO assistance) is estimated for barley, corn, oats, sorghum, soybeans, and wheat. U.S. cash price and yield are collected for the 1974-2015 crop years from the U.S. Department of Agriculture (USDA), National Agricultural Statistics Service QuickStats database. A trendline yield is computed for each crop year using linear regression. For each crop year, percent deviation of its yield from its linear trendline value is computed. Also computed is the percent deviation of price from the average price either for 1974-2006 or for 2007-2015, depending on which period the crop year falls. The first period is one of stationary prices prior to the price run up in the second period. The pair of percent price and yield deviations for each crop year is then applied to the U.S. price and yield forecasts for the 2015 crop year in the December 2015 World Agriculture Supply and Demand Estimates. This simple procedure normalizes the analysis on current U.S. prices and yields while utilizing historically observed variation for a given crop year in U.S. price, U.S. yield, and the relationship between them. Estimated assistance from ARC-CO for a crop year is referred to as indicated assistance because U.S., not county, yield is used. Yield across counties usually varies widely in a crop year. Because 5 crop years are used to calculate the ARC-CO 5-year Olympic average price and yield, calculation of ARC-CO payments begins with the 1979 crop year.

Shallow loss is calculated for corn, sorghum, soybeans, and wheat. Shallow loss was not calculated for barley and oats because harvest insurance prices are available for these two crops only for a few recent years. Shallow loss is calculated as the difference, if positive, of the insurance revenue prior to planting minus the insurance revenue at harvest, with a maximum amount equal to the plant revenue times the average coverage level purchased by farmers for individual farm coverage of the crop during the 2015 crop year. These average coverage levels were 76% for corn, 68% for sorghum, 75% for soybeans, and 71% for wheat. Expected yield at planting is measured as the Olympic yield for the 5 previous crop years, the same method used by ARC-CO. Plant and harvest insurance prices are for Illinois corn, wheat, and soybeans and Kansas sorghum. They are from the USDA, Risk Management Agency website and a data file complied by Art Barnaby of Kansas State University. Chicago wheat is used for the wheat analysis because Chicago historically has higher trading volume on wheat contracts than Kansas City or Minneapolis. The plant and harvest insurance prices are adjusted to the level of the 2015 crop year price so the ratio between plant insurance price, harvest insurance price, and U.S. crop year average price remains the same as that observed for a given crop year.