This is a presentation summary from the 2015 Illinois Farm Economics Summit (IFES) which occurred December 14-18, 2015. A complete collection of presentations including PowerPoint Slides (PPT) and printable summaries (PDF) are available here.

Net incomes on Illinois farms have decreased form an all-time high near $290,000 in 2012. In 2014, net income for Illinois grain farms enrolled in Illinois Farm Business Farm Management (FBFM) averaged near $100,000 per farm. Much lower income levels are expected in 2015. If commodity prices do not increase in 2016, net income in 2016 likely will be at similar levels to that in 2015.

If low commodity prices continue to persist, there will be a need to lower costs. In 2015, costs exceed revenue by around $100 per acre on cash rented farmland. Some combination of cash rent cuts and non-land cost reductions are needed to meet this $100 per acre level. Suggests for lowering costs include:

As of fall 2015, fertilizer prices appear to be decreasing from 2014 levels. On November 13th, the Agricultural Marketing Service reported the average Illinois prices for anhydrous ammonia of $653 per ton, a decrease of about $75 per ton from year-earlier levels. Decreases also occurred for dry fertilizers.

Many seed companies have announced seed prices for 2016 that are relatively the same as for 2015 prices.

Lower cash rents: At current price levels, average cash rents need to be lowered by at least $50 per acre. This $50 per acre reduction assumes significant reductions in non-land costs. Giving up farmland may be a prudent strategy if cash rents cannot be lowered. If return projections hold, significant losses in 2015 could cause the financial position of farms to deteriorate. 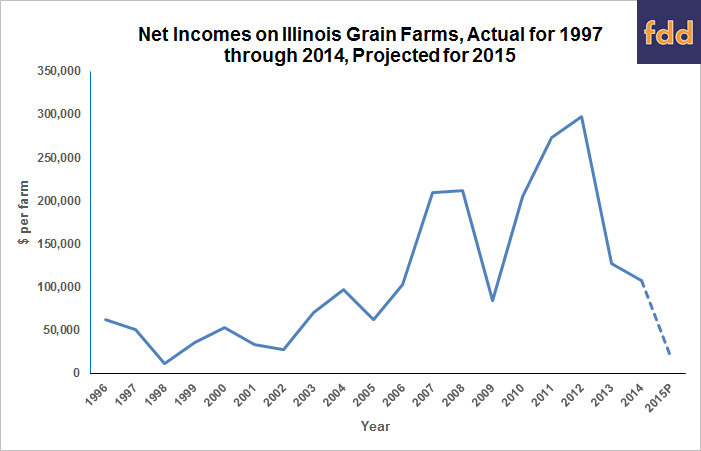