In a farmdoc daily article of February 3, 2016 we analyzed the competitive position of ethanol in gasoline blends as an octane enhancer. This analysis was motivated by the recent rise of ethanol prices above gasoline prices. To assess any changes in the competitive position of ethanol in gasoline blends, the price of the “aromatics,” benzene, toluene, and xylene, were analyzed relative to the price of ethanol. These compounds have octane ratings generally similar to that of ethanol and have a long history as octane enhancers in gasoline blends. Despite the recent increase in ethanol prices relative to gasoline, we found that ethanol prices were still below the price aromatics. However, the gap between the price of aromatics and ethanol has narrowed considerably over time. The purpose of this article is to investigate the breakeven conditions that would drive the gap to zero and eliminate the competitive advantage of ethanol as an octane enhancer.

We begin by reviewing the weekly ratio of wholesale ethanol and CBOB gasoline prices at the U.S. Gulf over January 4, 2013 through February 12, 2016. The source for the ethanol and CBOB price data is OPIS. Figure 1 shows that the ratio in the last two weeks has soared above 1.8, a level exceeded only during the throes of the Great Recession in late 2008 and early 2009. This, of course, is not surprising given the continued declines in crude oil and gasoline prices during recent weeks. Figure 2 shows the average aromatics price (average of benzene, toluene, and xylene prices) and ethanol price at the Gulf over January 4, 2013 through February 12, 2016. Bloomberg is the source of the aromatics price data. Despite the soaring ratio between wholesale ethanol and CBOB gasoline prices, ethanol remains cheaper than the average aromatics price. However, Figure 2 indicates that the gap between the two competing sources of octane continues to narrow, reaching $0.30 per gallon in the last two weeks. As Figure 3 demonstrates, the gap was smaller than recent observations only for a very brief period in March 2014 and then again in November-December 2014. 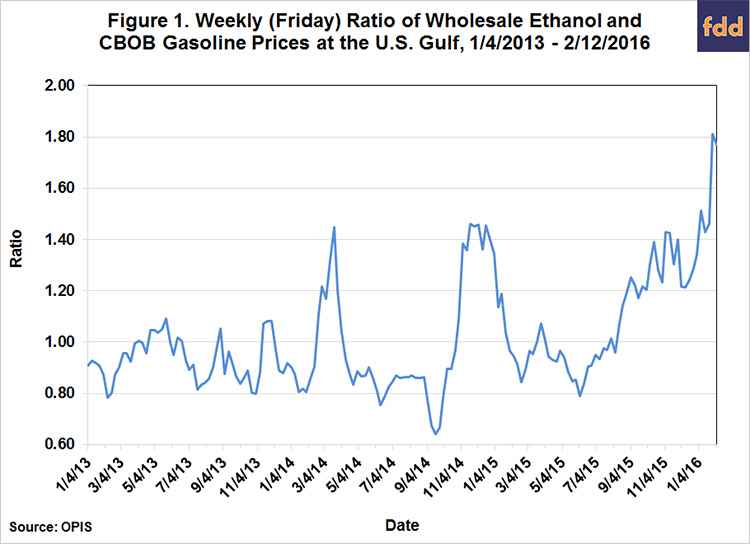 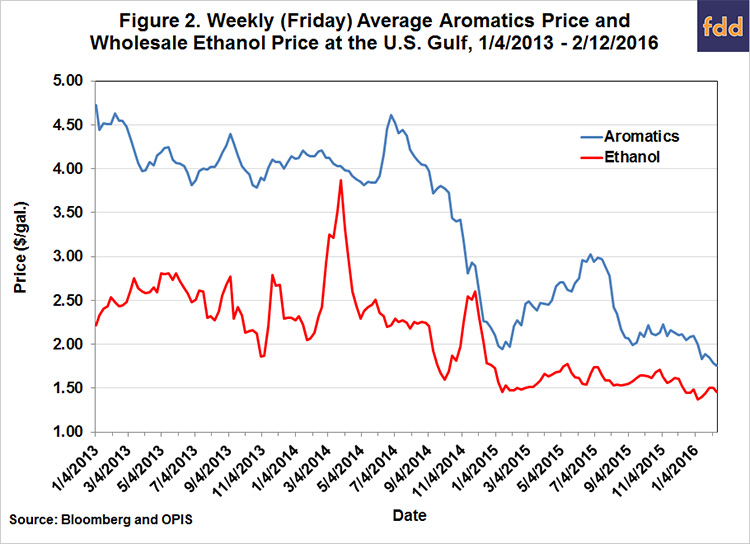 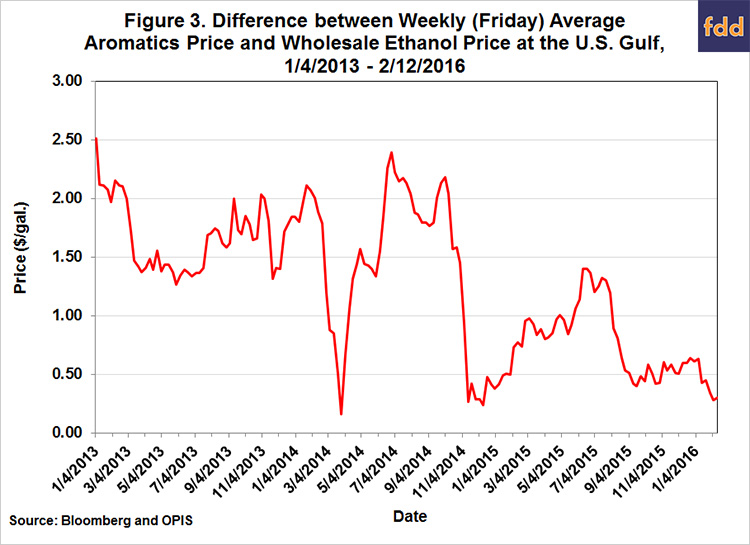 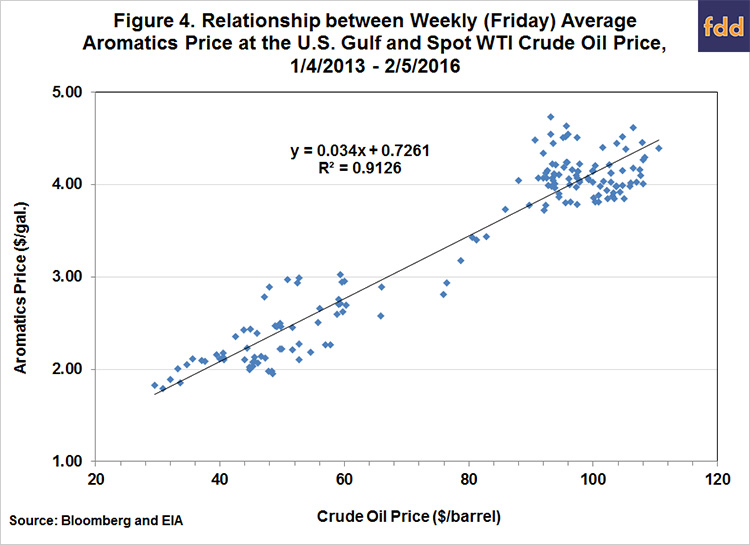 The relationship in Figure 4 is based on the representative Iowa ethanol plant model that we have used to track ethanol production profits the last several years (e.g., March 5, 2015; January 6, 2016). In order to derive the relationship, the price of all variable inputs except corn and the price of corn oil are set to the levels observed on February 12, 2016. The DDGS price is assumed to be the same price per pound as the corn price on February 12. Then, profit after all variable and fixed costs is assumed to be zero and the relationship between the price of corn and price of ethanol is derived. Since the plant model is calibrated to Iowa prices, a transportation differential between Iowa and the Gulf of $0.17 per gallon of ethanol is added to the original intercept. Given that a zero-profit condition in imposed, any points above and to the left of the line in Figure 5 represent profits; likewise, points below and to the right of the line represent losses. For perspective, the combination of actual prices for corn and ethanol on February 12, 2016 are shown on the chart. This data point is slightly below the line, indicating small losses for the representative ethanol plant at the present time (about -$0.03 per gallon). 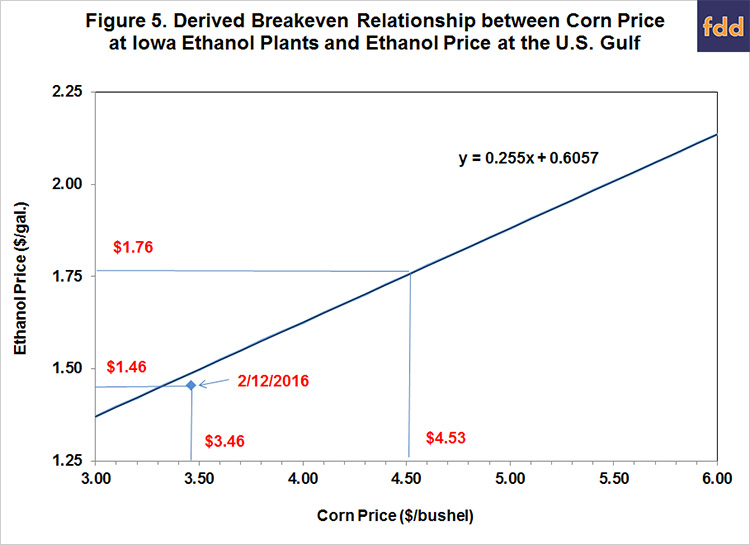 Now, hold the price of aromatics constant and set y in the equation shown in Figure 5 to $1.76 as follows, 1.76 = 0.255 x + 0.6057. Then, solve for x, the price of corn, which turns out to be $4.53 per bushel. So, based on the relationship shown in Figure 5, the price of corn has to rise to $4.53 before the price of ethanol would equal the current average price of the aromatics. This would be an increase of just over $1 per bushel, or about 30 percent. As we noted in our article on February 3, it would likely take a significant production shortfall in the 2016 U.S. corn crop to elicit this type of price increase. Historically, poor summer growing conditions for corn, mainly drought, have occurred about 15 percent of the time.

The competitive advantage of ethanol as a source of octane in gasoline blends has been eroded considerably by the precipitous drop in crude oil prices. Specifically, the gap between the price of the “aromatics,” benzene, toluene, and xylene, and ethanol has narrowed to about $0.30 per gallon. These compounds have octane ratings generally similar to that of ethanol and have a long history as octane enhancers in gasoline blends. We show that crude oil prices dropping into the low $20s per barrel would drive aromatics prices low enough to eliminate the current gap between aromatics and ethanol prices. Likewise, corn prices increasing to around $4.50 per bushel would drive ethanol prices high enough to eliminate the current gap. These represent the range of market conditions most likely required to erode the current competitive advantage of ethanol as an octane enhancer in gasoline blends. It is important to emphasize that these are only rough estimates of the bounds because refinery blending economics for gasoline are complicated due to the differing array of characteristics of alternative blending components and regulatory requirements to produce “spec” gasoline. As just one example, ethanol has chemical characteristics that may be beneficial, like octane, but others that are detrimental, like vapor pressure. Energy companies have developed sophisticated mathematical refinery models to determine optimal blends of the various gasoline components given prices and technical specifications, and these models are required for a complete analysis of the competitive position of ethanol.