USDA’s Prospective Planting report released on March 31st indicated that U.S. plantings of corn in 2016 will be 6% higher than in 2015 and soybean acres will be 1% less. Since the release of this report, corn prices remained about the same while soybean prices increased, increasing the expected profitability of soybeans relative to corn. Corn and soybean returns are calculated under revised harvest delivery prices, and under two prices scenarios presented in an April 13th farmdoc daily article. Soybeans are projected more profitable than corn. Three explanations on why corn acres are increasing are provided. Over time, reducing corn and increasing soybeans in rotations should be considered if prices remain at current levels.

Three price scenarios are examined in this article. The first is current prices for delivery of corn and soybeans at harvest. These represent central Illinois grain bids and are $3.75 per bushel for corn and $9.50 per bushel for soybeans.

Two sets of Market Year Average (MYA) prices were presented in the April 13th farmdoc daily article. The two price sets are based on two different national supply and consumption balance sheets. The first, labeled as WASDE, reflects expectations of the 2016/17 balance sheet to be released in the May WASDE Report. These prices are $3.40 for corn and $9.00 for soybeans. The second set, labeled IG, represents potential revisions to the WASDE balance sheet and has prices of $3.70 for corn and $9.45 for soybeans. More details behind these price forecasts are provided in the April 13th farmdoc daily article.

Corn-minus-soybean returns are calculated for the above three sets of prices using budgets for northern Illinois, central Illinois with high-productivity farmland, central Illinois with low productivity farmland, and southern Illinois. Yields and costs from 2016 Illinois Crop Budgets are used to make estimates. Relevant bushels and yields used in calculations are: 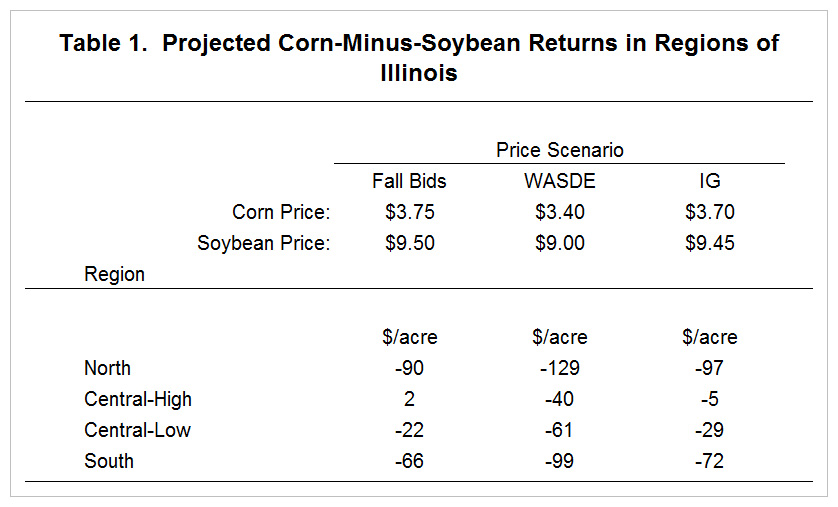 The IG scenario has prices very close to current fall delivery prices: $3.70 for corn and $9.45 for soybeans. Compared to current fall delivery prices, IP prices are slightly more favorable to soybeans. As a result, all of the projected corn-minus-soybean returns are negative for the IG scenario. Corn-minus-soybean returns are -$97 per acre for northern Illinois, -$5 per acre for central Illinois with high-productivity farmland, -$29 per acre for central Illinois with low productivity farmland, and -$72 per acre for southern Illinois.

The above price projections represent revisions of return projections made earlier in the year. The revisions contained in this article increase the profitability of soybeans relative to corn (see projections from a February 16 farmdoc daily article for comparisons). If these 2016 projections hold, 2016 will be the fourth year in a row where soybean returns exceed corn returns.

If soybean returns are projected higher than corn returns, why is more corn projected to be raised in the Prospective Plantings report? No one explanation likely suffices, but three possibilities present themselves. The first is yield expectations. Weather forecasts suggest that El Nino is weakening, which could lead to a hot and wet July, but a hot and dry August. If this weather scenario came to fruition, soybean yields would likely suffer compared to corn yields. These expectations may play a role in farmer decisions; however, one should take this explanation with a grain of salt. Weather forecasts further out than a week are notoriously error-prone and often contain little more information that historical averages. Farmers likely realize the unreliability of summer-time forecasts and may place little weight on forecasts.

The second is that corn typically has been more profitable than soybeans, particularly near long-run projections of $4.50 for corn and $10.00 for soybeans (farmdoc daily, March 15, 2016). Farmers may be reacting less to current market conditions and anticipating a return to conditions closer to longer-run averages. Weighing against this explanation is the fact that soybeans have been more profitable than corn in the previous three years (farmdoc daily, February 16, 2016). 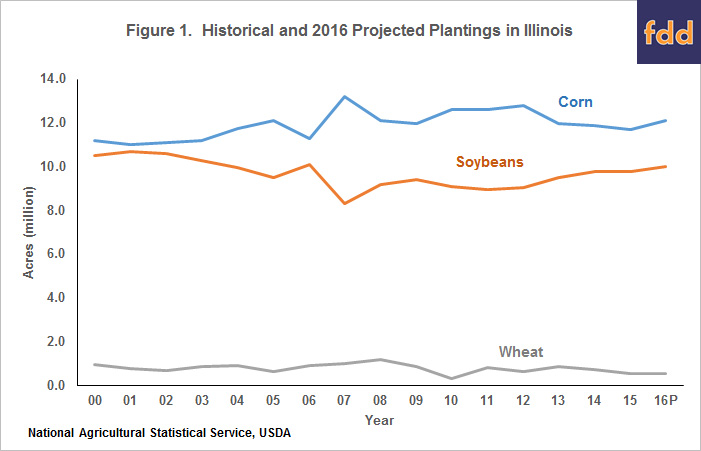 In actuality, 2016 corn-to-soybean plantings in Illinois are not projected to change much from 2015 levels. For 2016, the ratio of corn to soybeans acres is 1.21, up slightly from the 2015 level of 1.19. Overall though, relative plantings have not changed much in Illinois since 2013 (see Figure 2). 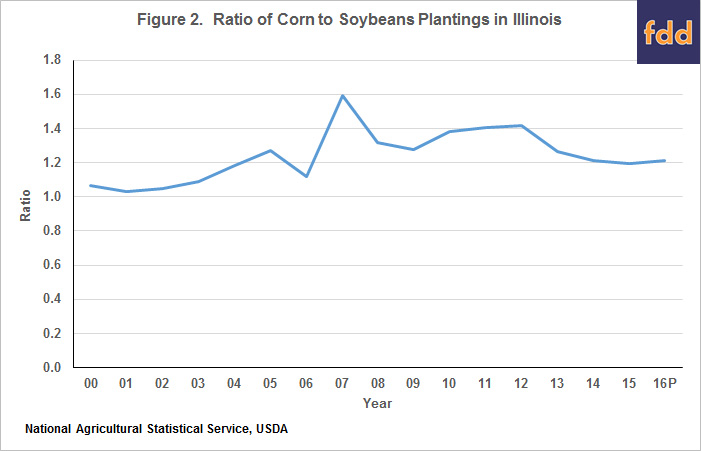 Illinois farmers seemed to have settled on rotations that result in 20% more corn than soybean acres. Given the past three years of return results, these rotations may need to be reevaluated. A shift to more soybeans may be economically warranted, with perhaps a shift to a 50-50 corn-soybean rotation being appropriate in many areas of northern and central Illinois. Corn-after-corn now is projected to be much less profitable than soybeans-after-corn (farmdoc daily, March 15, 2016).

Planting decisions for 2016 can change from intentions, particularly if planting becomes delayed (see April 18, 2016 farmdoc daily article for a discussion). The Planting Decision Model, a Microsoft Excel spreadsheet, can be used to evaluate late planting. This spreadsheet is available for downloading from the FAST section of farmdoc.

Not shifting away from corn to soybeans does have impacts in more than just commodity markets. Maintaining high corn acres reduces incentives for input suppliers to lower input prices. Corn costs are higher than soybean costs. For example, seed costs for corn average $125 per acre compared to $76 per acre for soybeans. Selling corn seed likely provides more margin to input supply firms than does selling soybean seed. Also, fertilizer costs are lower for soybeans because nitrogen is not needed for soybeans. Recent expectations of more corn acres may have led to recent increases in nitrogen fertilizer prices (farmdoc daily, April 5, 2015). A shift to soybeans would provide incentives for input firms to reduce corn costs to maintain corn acres.