Corn and soybean prices have increased in the past several months (see farmdoc daily, June 13, 2016), leading to improved 2016 income prospects. Even given these price increases, working capital is still projected to be negative for rented farmland, leading to a continuing need to cut costs. When making these projections, yields are at their expected levels. Lower yields would result in higher working capital losses. More accurate income and working capital prospects will be known in August, once yield levels are more certain and attended price responses come into clearer focus.

Working capital changes are estimated for three price scenarios. The first represents 2015 and uses estimated market year average prices of $3.83 per bushel for corn and $9.13 per bushel for soybeans (see Table 1). Based on these prices, the Agricultural Risk Coverage – county coverage (ARC-CO) payment for 2015 is estimated at $42 per acre (see Table 1). The 2015 ARC-CO payment represents an average over corn and soybean base acres, and will be made in the fall of 2016. 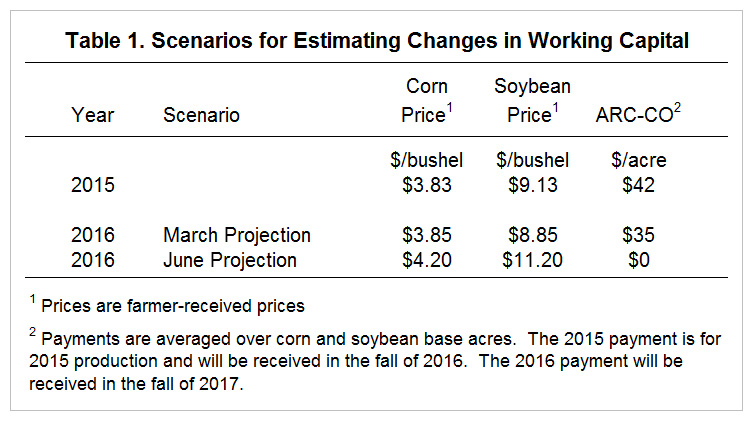 Prices have risen since March. Currently, the market is offering $4.20 per bushel for corn delivered in the fall, $.35 per bushel higher than in March. Soybean fall delivery price is $11.20 per bushel, $2.35 per bushel above than in March. These June projections will increase crop revenue; however, ARC-CO payments would decline. ARC-CO is estimated not to pay at these higher prices (see Table 1).

Situation for Which Working Capital is Projected

Working capital changes are estimated for central Illinois on low-productivity farmland. Key assumptions in projections are:

Working capital changes are projected for owned, cash rent, and share rent farmland, with values stated on a per acre basis.

Projections use expected yield and prices near long-run averages, suggesting that revenue increases should not be expected to eliminate the $46 loss for cash rent farmland (see Table 3). Rather cost cuts must continue. Table 3 shows working capital calculations and is used to illustrate areas of potential cash flow cuts. Most likely areas for further reductions are: 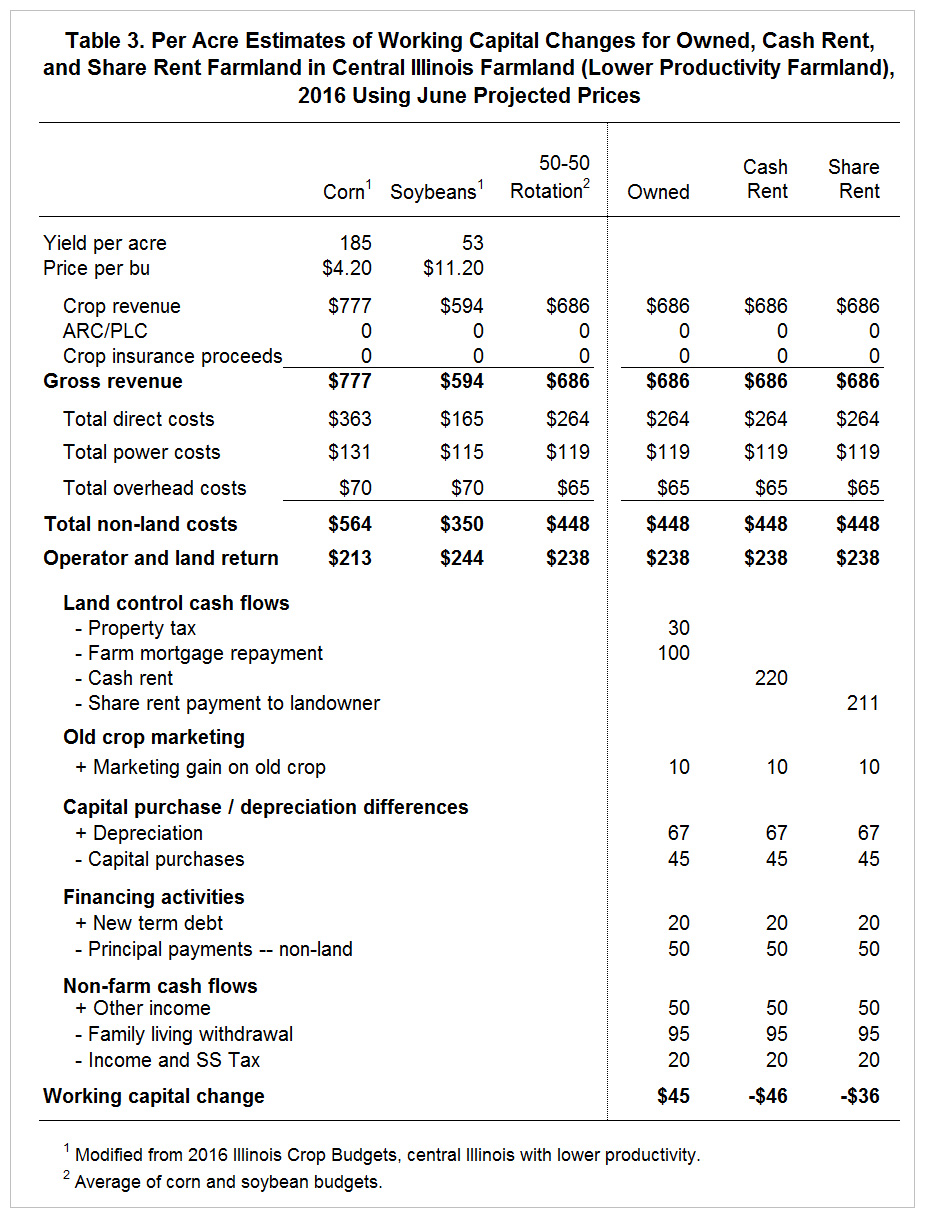 The above 2016 working capital projections are based on expected yields. Current price levels may be built on market expectations of below average yields. Lowering yields would worsen working capital losses.

Information contained in U.S.D.A. reports released at the end of June could change prices. Moreover, the current yield determination periods for corn and soybeans are near. In August, yield levels will be more certain, and associated price responses will be underway, leading to the ability more accurately project net income and working capital changes for 2016. However, it is unlikely that a price and yields scenario will arise that still does not result in the need to cut cash flows, particularly on rented farmland.