The longer-term fundamentals of U.S. gasoline consumption cannot be understood without reference to the real price of crude oil (farmdoc daily, August 19, 2015). One of the first things taught in an introductory economics course is that real, or inflation-adjusted, prices are what matter in economic analysis. The classic example is a consumer with $100 to spend on two goods. Let’s assume that the price of good 1 is $10 and the price of good 2 is $20. If the consumer spends all their money on good 1, they can buy 10 units of good 1. Likewise, if all money is spent on good 2, the consumer can buy 5 units of good 2. Now, consider an inflationary scenario where the price of all goods and income double. The consumer can still buy a maximum of 10 units of good 1 or 5 units of good 2. Since economic “satisfaction” is based on quantities, the consumer has the same degree of satisfaction in either scenario. This is why it is important to adjust prices for inflation before conducting analysis over anything beyond short time intervals.

Figure 1 presents the real annual average spot prices of Brent crude oil over 1990-2015. Brent crude oil prices are considered because Brent prices have predicted U.S. gasoline prices better in recent years, as pointed out by Jim Hamilton (May 16, 2012, June 24, 2012; June 21, 2014) and others. The Brent crude oil price series is collected by the EIA and found here. Real prices are computed by dividing nominal prices by the U.S. Consumer Price Index (CPI) for all urban consumers, which can be found here. The base for the CPI is 1982-1984=100, which means that computed real prices are stated in terms of average prices over the 1982-1984 period. Another way of saying the same thing is that prices are adjusted to a constant purchasing power in terms of 1982-1984 dollars. It is important to note that a different base period will result in different computed real prices. 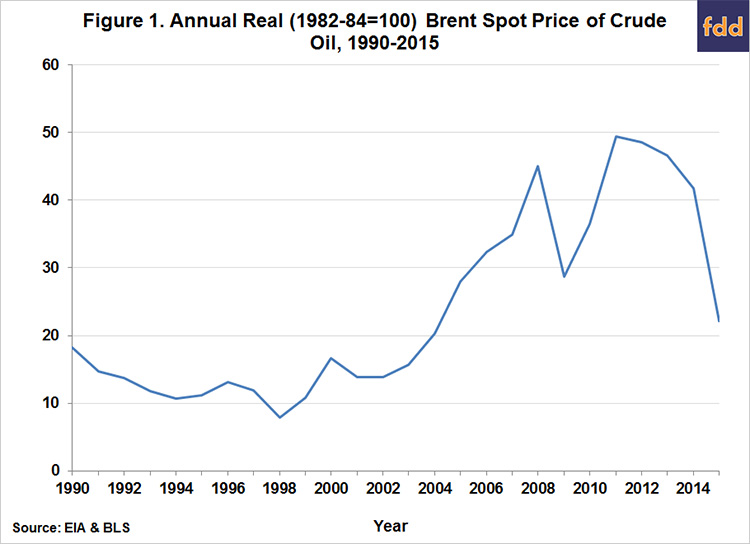 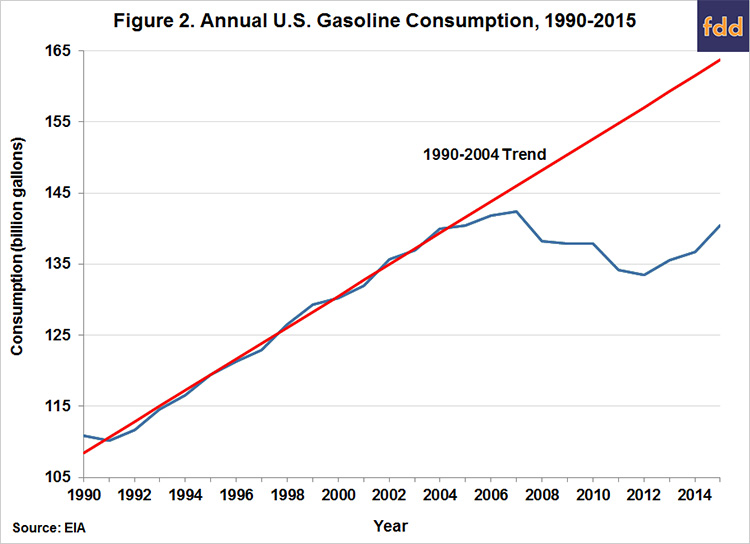 We can now decompose total gasoline consumption into its two principal components in order to provide further perspective. Specifically, we can use the following relationship to better understand the drivers of consumption: 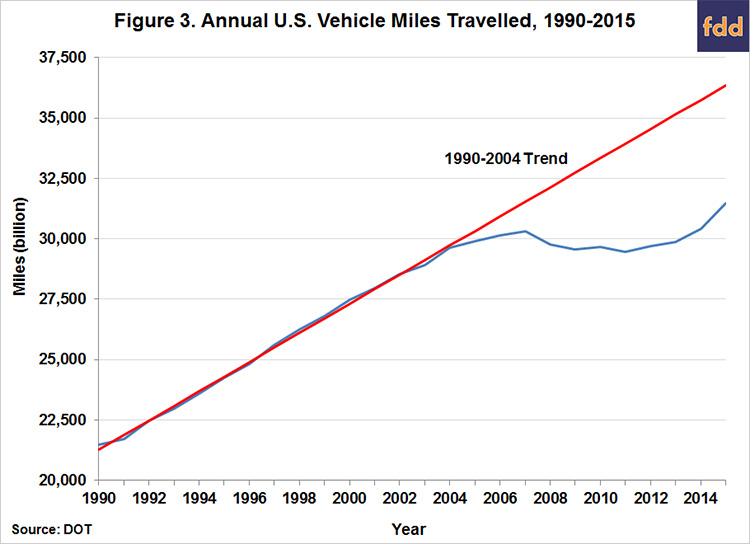 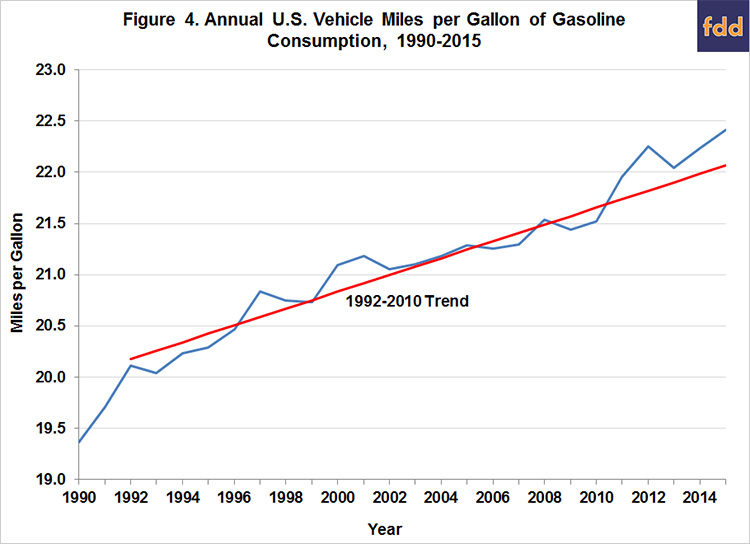 An alternate view of gasoline consumption and its components is presented in Table 1 that will be especially useful when thinking about future projections. Here, the annual percentage change for the two components and total is listed for each year between 1991 and 2015. Note that the percentage change in miles travelled minus the percentage change in miles per gallon approximately equals the percentage change in total gasoline consumption. This means that if there is growth in miles travelled some of it may be offset by improvements in fuel efficiency (miles per gallon). For example, miles traveled was up 3.5 percent in 2015, but fuel efficiency increased 0.8 percent, with the result that total gasoline consumption was up a net of 2.7 percent. The averages reported at the bottom of Table 1 summarize the differences in economic behavior during 1990-2004, the period of low and stable real crude oil prices, compared to 2005-2015, when crude oil prices were highly volatile. From 1990-2004, miles travelled grew at an annual average rate of 2.3 percent and miles per gallon grew an average of 0.6 percent, for a net growth in gasoline consumption of 1.7 percent. The comparable figures for 2005-2015 are 0.6 percent for miles travelled, 0.5 percent for miles per gallon, and 0.0 percent for consumption. It is interesting to observe that the growth rate of fuel efficiency was actually slightly higher over 1990-2004 compared to 2005-2015, despite the jump in efficiency that started in 2011. 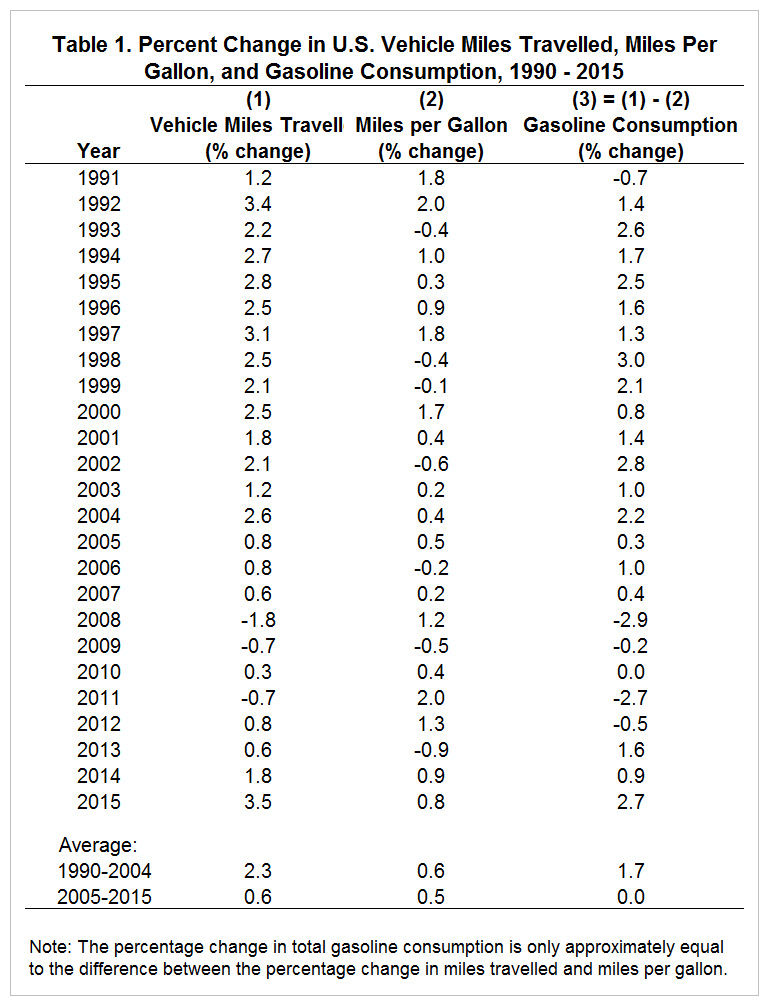 In order to project total U.S. gasoline consumption for 2016-2018, we take the approach of projecting the percentage change in the two components of consumption–miles traveled and miles per gallon–and then compute the percentage change in consumption as the difference between the two. We start with the available data for the growth in miles traveled in recent months. Figure 5 shows that the year-over-year monthly growth rate in miles traveled has been quite impressive since January 2015, averaging 3.7 percent. The average for the two most recently available months, February and March 2016, was 5.3 percent. U.S. drivers have certainly taken advantage of cheaper gasoline prices by driving more miles. 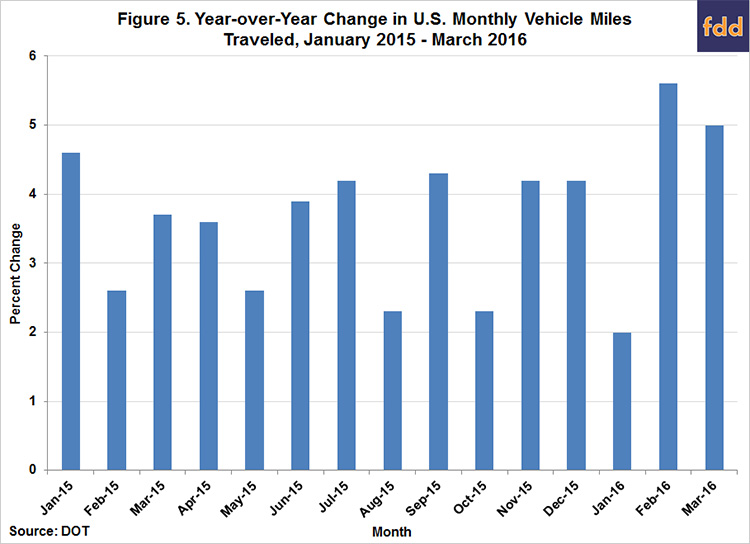 But what about fuel efficiency, which has been growing impressively in recent years? Figure 6 presents the monthly weighted-average fuel efficiency of new vehicle sales in the U.S. from October 2007 through May 2016. The data are collected by the Transportation Institute of the University of Michigan and available here. Clearly, U.S. drivers responded to the dramatic fall in real crude oil prices by not only driving more but also by shifting vehicle purchases towards less fuel efficient models. Figure 6 shows there was a sharp break in the weighted-average fuel efficiency of new vehicles starting in September 2014, when crude oil prices began their period of most rapid descent. This change in purchasing behavior has had a major impact on average new vehicle fuel efficiency. If U.S. drivers had continued on the same trend established over October 2007 through August 2014, the weighted average fuel efficiency would now be almost 27 miles per gallon instead of 25.4 miles per gallon, the observation for May 2016. The evidence to date suggests this gap will only continue to grow. 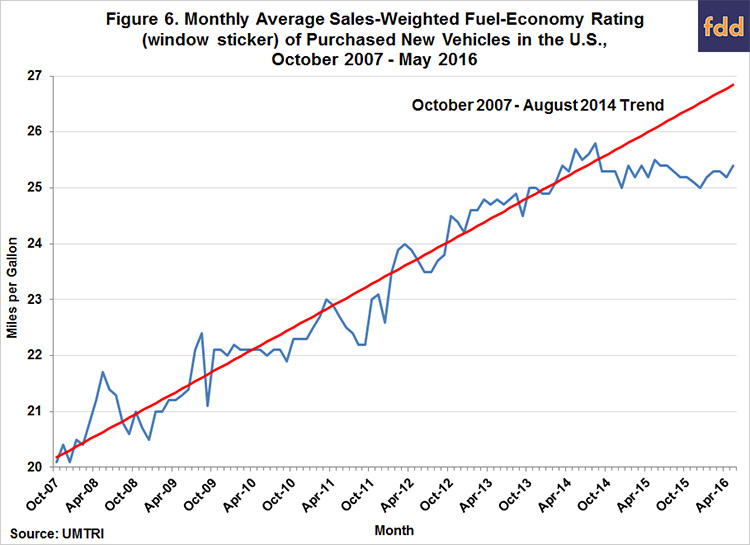 To summarize, the available data indicates that miles travelled is growing exceptionally fast and fuel efficiency is basically flat, which should be a formula for very rapid growth in total gasoline consumption. However, one has to also consider the substantial recovery in gasoline prices (and crude oil prices) that has occurred since the beginning of the year. Figure 7 shows the weekly U.S. average price of regular gasoline at the pump collected by the EIA and available here. Since making a low of $1.63 per gallon in mid-February, the price of gasoline has rebounded back above $2.30 in recent weeks. This represents more than a 60 percent retracement of the decline in gasoline prices that occurred from June last year through February of this year. If this rebound in gasoline prices persists it will have some impact on growth rates for miles travelled, total gasoline consumption, and perhaps even fuel efficiency. 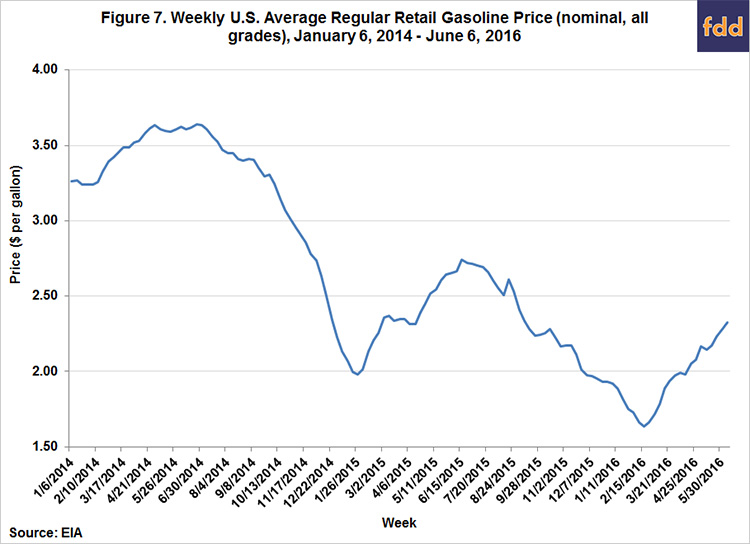 Table 2 contains our projections of total gasoline consumption in the U.S. and its components for 2016-2018. We were purposely somewhat conservative in making the projections. For example, miles travelled has been growing between 4 and 5 percent in recent months on a year-over-year basis, but we only forecast miles travelled for 2015 to increase by 2.9 percent for the entire year. Given the first quarter rate already observed, this implies growth for the remainder of the year closer to 2 percent year-over-year. While this may be on the low side, this does allow the rebound in gasoline prices to have some impact. We also make the somewhat arbitrary assumption that the growth rate in miles per gallon in 2015 is halved in 2016. Even though new vehicle fuel efficiency is flat (Figure 6), older and less efficient vehicles must still be retired. The net for 2016 is a growth rate in total gasoline consumption of 2.5 percent, which results in a volume of consumption of 143.9 billion gallons. For 2017 and 2018 we assume that crude oil and gasoline prices will remain near current levels, consistent with crude oil and gasoline futures prices at the present time. We assume the growth in miles travelled will diminish as the initial impact of the crash in prices dissipates. With a constant growth rate of 0.4 percent in miles per gallon, this implies 1.5 percent consumption growth for 2017 and 1.0 percent growth for 2018. 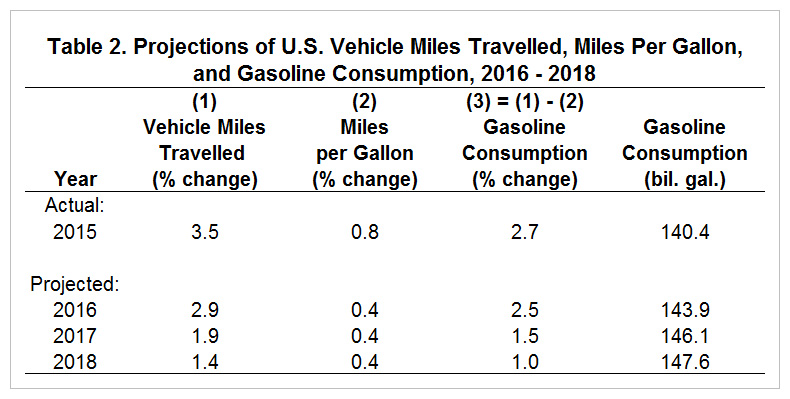 As a final point, it is interesting to compare our projections to the latest projections available from the EIA in the June STEO. The EIA is currently projecting 1.9 percent growth in total gasoline consumption for 2016 and no growth for 2017 (the EIA is not yet making 2018 projections in the STEO). Given that the EIA has consistently revised upwards their estimates for 2016 in recent months, we would not be surprised if at the end of the year they are near our projection. The most surprising part of the EIA projections is for 2017, which is flat compared to 2016. This essentially means that the EIA must be assuming no growth in miles travelled for 2017 or that any growth in miles travelled is offset by growth in fuel efficiency. This is puzzling in light of the available data.

In this article, we delve into the details of projecting total gasoline consumption, which is a key variable for implementation of the RFS. During the era of low and steady real crude oil prices between 1990 and 2004, gasoline consumption grew at the remarkably steady pace of 2.2 billion gallons per year. Since then, real crude oil prices and gasoline consumption have been on a major rollercoaster ride, but interestingly enough, both are back near where they started. In order to project total U.S. gasoline consumption for 2016-2018, we take the approach of projecting the percentage change in the two components of consumption–miles traveled and miles per gallon–and then compute the percentage change in consumption as the difference between the two. The available data indicate that miles travelled is growing exceptionally fast and fuel efficiency is basically flat, but there has also been a substantial recovery in crude oil and gasoline prices since the first of the year. We project that total consumption will increase 2.5, 1.5, and 1.0 percent in 2016, 2017, and 2018, respectively. While these may be somewhat conservative in relation to the most recently available data, they are nonetheless substantially higher than the latest EIA projections. These differences in projections may not appear that important at first glance, but they can actually have a significant impact on estimates of the size of the conventional ethanol gap, a key variable in the implementation of the RFS. It will be interesting to see whether the final EPA rulemaking for the 2017 RFS standards, expected later this year in November, incorporate higher projections of U.S. gasoline consumption.