Data are available for 185 farm observations as follows: corn in Illinois, 61 farms; soybeans in Illinois, 61 farms; soybeans in Kansas, 28 farms; and wheat in Kansas, 35 farms. Other state-crop combinations have fewer than 20 farm observations, which is questionable for statistical inferences. Revenue per acre at harvest is calculated as the price during the insurance harvest discovery period times the farm yield per planted acre during the same crop year (see data note 1). Revenue per acre expected prior to planting for the crop year is calculated as the insurance price during the pre-plant price discovery period times the Olympic average of the farm’s plant yields for the 5 prior crop years (see data note 2). Percent change in revenue, price, and yield is then calculated. For example, percent change in revenue equals: [(harvest revenue minus pre-plant expected revenue) divided by pre-plant expected revenue]. Variability is measured as the standard deviation of percent changes across the years in the analysis period (see data notes 3 and 4). Insurance prices are from the U.S. Department of Agriculture (USDA), Risk Management Agency and a data set compiled by Art Barnaby of Kansas State University.

Variability of revenue over the growing season averages approximately 40% for the farms in Kansas growing soybeans and wheat, or twice as large as the average revenue variability for Illinois corn and soybeans (see Figure 1). Revenue variability is measured as the standard deviation of the percent changes in revenue between the pre-plant and harvest insurance price discovery periods across the 1978-2012 crop years. Figure 1 in this article presents the same visual as Figure 1 in the farmdoc daily article of July 13, 2016. Figure 1 in the July 13 article presents the average percent loss for the years when a loss occurs (see data note 5). 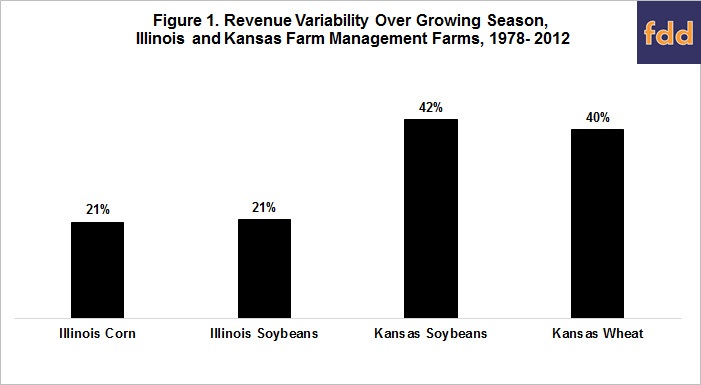 Variability of price over the growing season is nearly identical for all 4 crop-state combinations (see Figure 2). The same price variability is expected for Illinois and Kansas soybeans because the same insurance price discovery periods and Chicago November soybean futures contract are used. The similarity in price variability implies that price variability cannot explain the higher revenue variability for the Kansas crops. 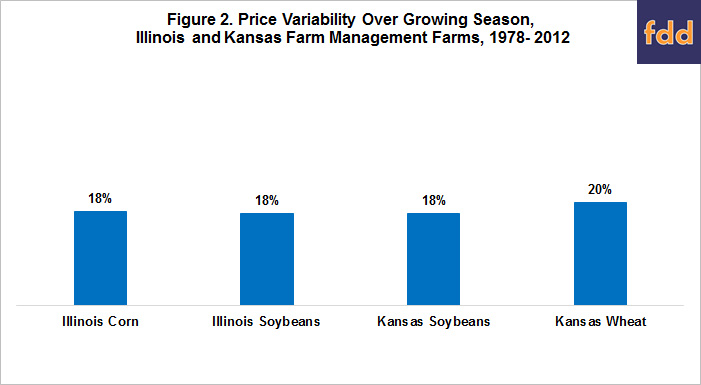 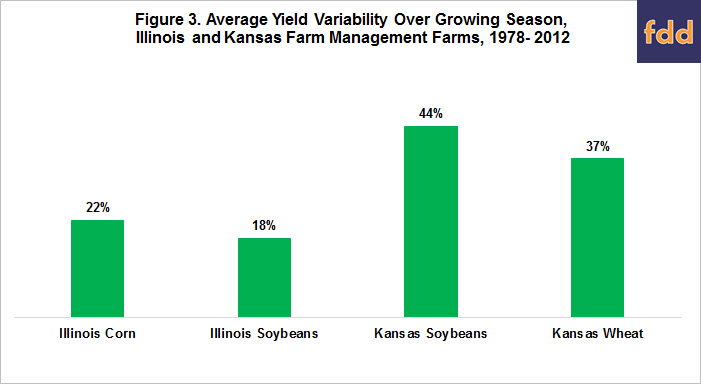 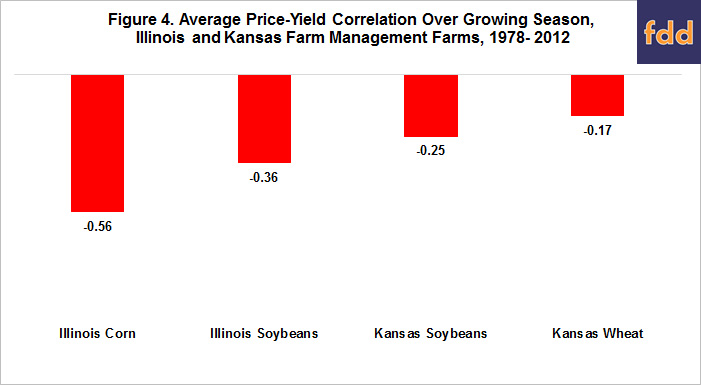 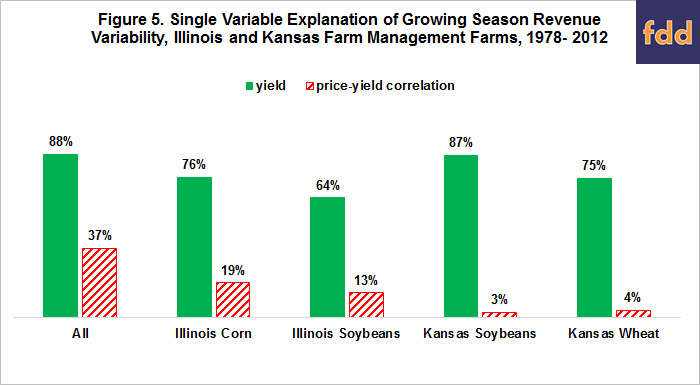 Crop insurance prices were collected for the state-crop combination.

An Olympic average removes the low and high values before calculating the average.

Since a 5 year Olympic average is used to measure projected yield, variability of yield cannot be calculated for the first 5 years, 1973-1977. Hence, the number of observations is 35, not 40.

Findings are similar when projected yield is measured as a trend yield for the crop year based on a linear regression of planted yields between 1973 and 2012.

A third farmdoc daily article that utilizes the same data as used in these 2 articles appeared on July 21, 2016. It was titled, "County-Farm Loss Basis: Evidence from Illinois and Kansas Farm Management Data."