Preparing for the upcoming 2018 Farm Bill debate, we examine the traditional farm coalition, but updated to reflect current commodity production to offer some perspective on the political process. American farm policy dates to the post-World War I price collapse of the three major agricultural commodities: corn, cotton, and wheat. Producers formed a coalition that shaped the Agricultural Adjustment Act of 1933 and made it a part of President Franklin Roosevelt’s New Deal efforts to combat the Great Depression. Throughout the 80 years of legislative work that followed, the corn-cotton-wheat coalition played a leading role in shaping farm policy and passing farm bills. This traditional farm coalition is expected to remain central to future farm bill debates. This article explores the current geographical reach – or political footprint – of this traditional coalition across Congressional districts, based on recent production history of these commodities.

The USDA recently released an atlas of crop producing areas in the U.S. and around the world. The Major World Crop Areas and Climate Profiles (MWCACP) maps identify the major and minor crop areas at the county level. Using NASS crop progress data from 2010 to 2014, major crop areas are defined as those that account for 75% of the total national production of each crop. Major and minor areas combined account for 99% of the total national production. The following maps use only the major crop areas to explore the political footprints of corn, cotton and wheat.

Figure 1 uses the USDA information to map the traditional farm coalition, demonstrating how it previously gained and currently maintains national support for commodity programs by uniting producers across regions. Cotton production is exclusive to the Southern region of the country. Corn is concentrated in the Midwest. Wheat production is concentrated in the Great Plains and split between spring wheat in the northern Plains and winter wheat in the southern. Corn and wheat production overlap in many states, extending beyond the regions where each is concentrated. For example, several counties in the Mississippi Delta region are major production areas for all three of the commodities in the traditional coalition. Production reach, however, may not translate into political reach. 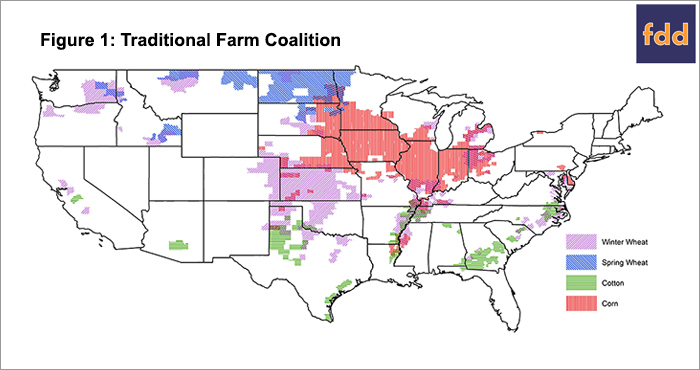 The resulting maps, presented below in Figures 2 – 5, demonstrate the potential political reach of each of these three commodities but this may not translate into actual political influence in a farm bill debate. Each commodity is centered on a single geographic area where production of the commodity is most heavily concentrated. This would be the region where that commodity would be expected to have the strongest political impact. Where production overlaps, a commodity has the potential to impact political support but that potential is likely limited. For example, several districts in the Mississippi Delta, Northern Texas, and Eastern North Carolina are identified as major production areas for corn, cotton, and wheat. It is unlikely that all three commodities will have the same political impact in these areas.

The degree of political impact may be due to the fact that the contribution of each commodity to the overall economy of the district varies substantially. Similarly, regional concentration of production may lead to a prioritization of political support. Each commodity’s influence would therefore be limited to areas where the production is concentrated and the commodity contributes a large amount to the local economy. For example, some counties in Texas are included in USDA’s major producing areas for corn but Texas accounts for only 2 percent of the national production of corn. By comparison, the states of Iowa, Illinois and Indiana account for nearly 40 percent of the national production of corn. We would not expect corn to have the same political influence in Texas as it does in Iowa, Illinois or Indiana. Instead, we would expect that cotton takes priority in those same counties in Texas, a state that produces 35 percent of the total national production of cotton. 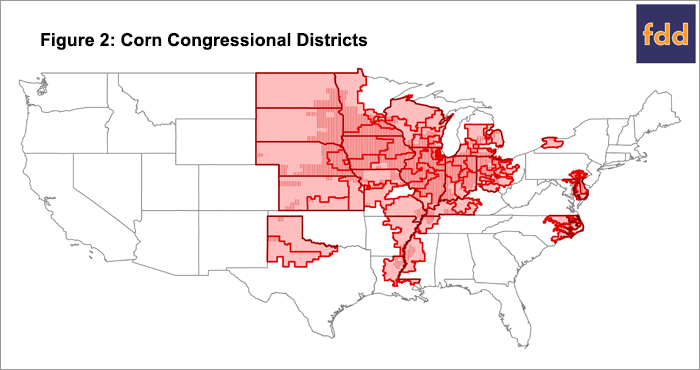 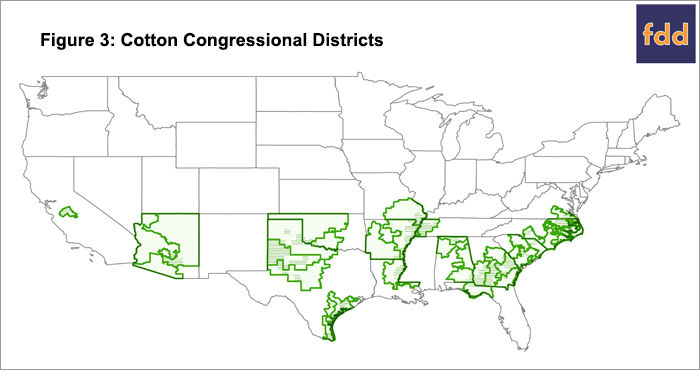 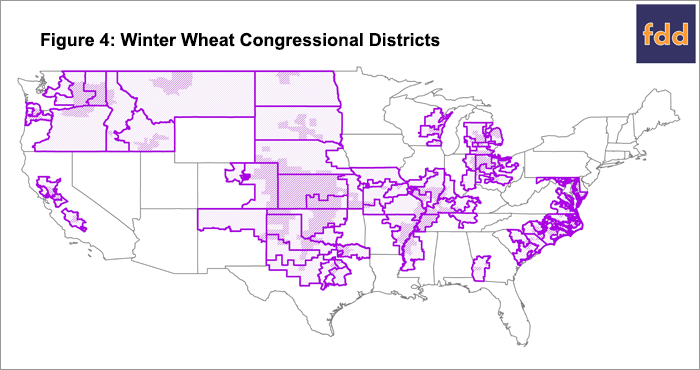 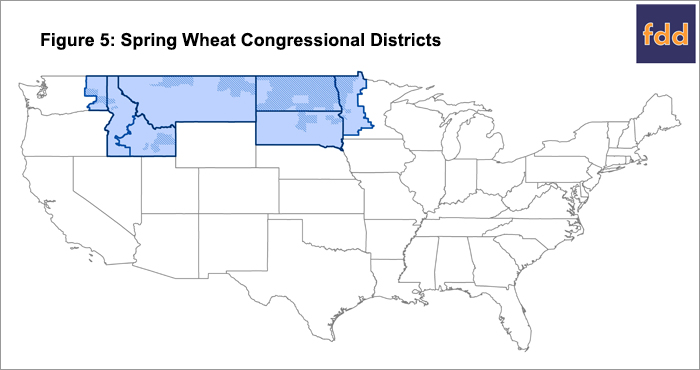 Much of the development of farm policy depends on negotiations among the traditional farm coalition commodities which, in turn, are driven by the political influence of those commodities in states and Congressional districts. This article is a continuation of a series on mapping U.S. farm policy. Future articles will explore the topic further in preparation for the next farm bill debate. Prior articles similarly examined issues related to the 2014 Farm Bill debate. They are available at farmdoc daily: December 5, 2013; January 10, 2014; and April 17, 2014.

Kuethe, T., and J. Coppess. "Mapping the Fate of the Farm Bill." farmdoc daily (3):231, Department of Agricultural and Consumer Economics, University of Illinois at Urbana-Champaign, December 5, 2013.

Kuethe, T., and J. Coppess. "Mapping the Fate of the Farm Bill: A Closer Look at SNAP." farmdoc daily (4):3, Department of Agricultural and Consumer Economics, University of Illinois at Urbana-Champaign, January 10, 2014.