Crop input prices are a topic of considerable discussion. Numerous farmdoc daily articles have addressed the topic; most recently September 20, 2016 (Schnitkey). This article provides another perspective by comparing changes in input prices during the 3 multiple year price decline periods that have occurred since 1970. The current period has notably larger declines in fuel and fertilizer prices; similar changes in seed, chemical, and machinery prices; and a notably larger increase in rent. The latter underscores the need to renegotiate rents. It also raises a question, “If farmers, by not aggressively negotiating lower rents, are indicating financial stress is less than it appears?”

Three multiple year declines in crop revenue and price have occurred since 1970. The index of prices received by US farms for all crops peaked in calendar years 1981, 1996, and 2012 before declining for multiple years. The index bottomed in 1986 and 2000. Calendar year 2016 may or may not be the bottom of the current decline (see data notes 1 and 2). The crop price index is used because no similar index exists for revenue. Also used in this study is the index of prices paid by US farms for 6 input categories – ag services and rents, chemicals, fertilizer, fuels, machinery, and seed. Percent change in these indices is calculated relative to the average value for the 3 years ending in the peak year. A 3 year average smooths the influence of individual years and reflects that changes in input prices generally lag changes in output prices. For a discussion of the lag process for crops and its implications for farm management and policy, see the farmdoc daily article, “Have U.S. Farm Input Prices Followed U.S. Crop Prices” (Zulauf and Rettig, September 17, 2015), The price data are from QuickStats (US Department of Agriculture, National Agricultural Statistics Service).

The index of all crop prices received has declined in each of the 3 periods by 13% to 17% (see Figure 1). Thus, the current decline is not abnormally large or small relative to prior multiple year declines, although this observation could change as more time passes. 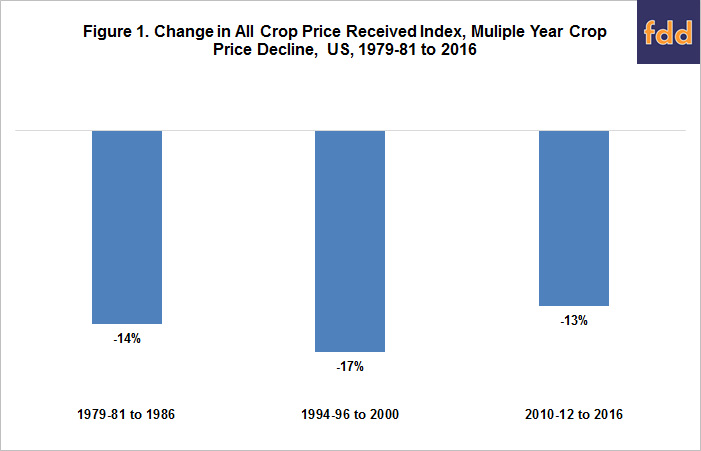 Price behavior of the 6 individual input categories differs across the decline periods (see Figure 2). Price of fuels varies the most. It increased 38% from 1994-96 to 2000 but has dropped 41% in the current period. This variation reflects that the crop sector is a relatively small component of the demand for fuels. Price of fertilizer decreased in each period, but its decline is notably larger in the current period. In contrast, chemical, seed, and machinery prices increased in each period, with the percent increases similar for the two most recent periods. The ag services and rent price index is up 20% in the current period compared with a 5% increase from 1979-81 to 1986 and a 1% decline from 1994-96 to 2000. A price index for rent alone is available since 1990. It declined by 6% from 1994-96 to 2000, but has increased 24% since 2010-12. Because price change varies by input category, behavior of a composite index of crop sector inputs was also examined. Such an index is also first available for 1990. Despite the variation among the individual inputs, the composite index has increased by a similar 8% and 9% for 1994-96 to 2000 and 2010-12 to 2016, respectively. 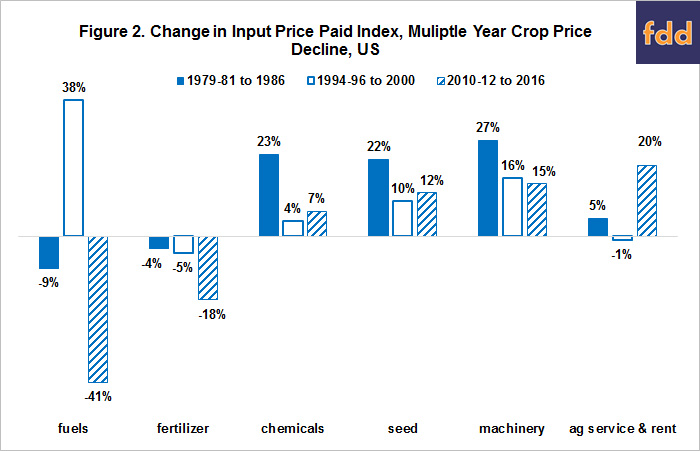 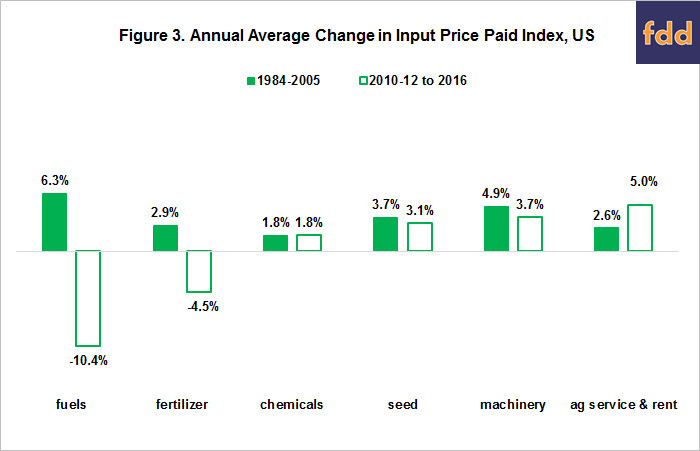 1. These periods differ from those used in the September 21, 2016 farmdoc daily article, "Comparing Revenue and Price Declines during Recent Multiple Year Declines." This article uses calendar, not crop, years and includes the early 1980s. The earlier article focused on the individual years of the decline period. This article's focus is on prices during the period's first and last years.

2. Values for the 2016 calendar year are averages of monthly values for January through July.