The Farm Service Agency has released 2015 county yields and is making payments on the Agricultural Risk Coverage – County Coverage (ARC-CO) commodity title program. This article contains maps showing payments per base acre for corn, soybeans, and wheat. Also shown is a table giving payments for Illinois Counties. An Excel file containing all counties and their yields and payments is provided here. Not all counties have complete enough data to calculate payments. As a result, additional counties will have their payments announced in the future.

ARC-CO is a county revenue program that makes payments when actual county revenue is below a guarantee set at 86% of a benchmark revenue (see farmdoc daily February 20, 2014 for a description of ARC-CO payments). ARC-CO uses national, marketing-year-average (MYA) prices in the calculation of actual and benchmark revenues. With actual MYA prices for corn, beans, and wheat falling well below benchmark prices, payments are triggered in many counties, even where yields were above the county benchmark yield. The benchmark price for corn used in calculating ARC guarantees in 2015 was $5.29 per bushel. The MYA price for corn in 2015 is $3.61 per bushel, more than 30% below the benchmark price. Given the 86% guarantee level for the ARC-CO program, payments are triggered in counties where yields are up to 25% above the county benchmark yield. A similar situation exists for soybeans and wheat. The 2015 benchmark price for soybeans (wheat) is $12.27 ($6.70) compared to a 2015 MYA price estimate of $8.95 ($4.89). Thus, soybean and wheat payments are triggered in counties with soybean and wheat yields up to 18% above their respective benchmark yields.

2015 ARC-CO payments are also impacted by the Federal Budget sequester. As was the case for 2014 payments, ARC-CO payments will be reduced 6.8% due to the sequester requirement contained in Congressional budgeting legislation from 2011. The sequester reduction is incorporated into the payment levels discussed below. 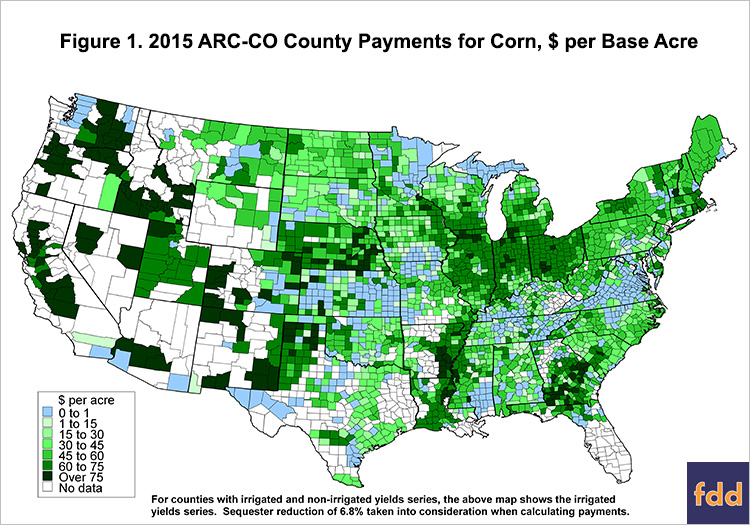 Figure 2 shows a map of 2015 ARC-CO payments for soybeans. Most soybean producing counties across the country will receive ARC-CO payments. Within the corn-belt, the largest payments will occur in counties in the band beginning in eastern Iowa, crossing northern Illinois and southern Wisconsin, extending across northern and central Indiana and Ohio. In contrast, there are also counties where soybean yields were high enough that payments were not triggered despite low prices. Examples include central and southern MN, and northern Iowa. 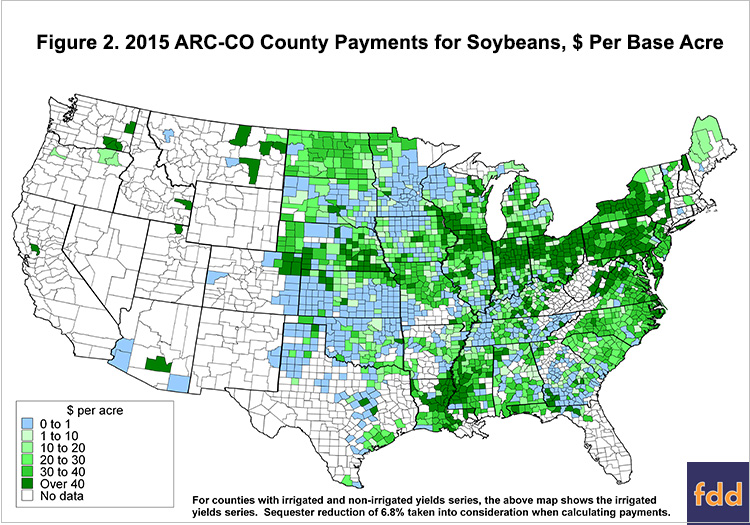 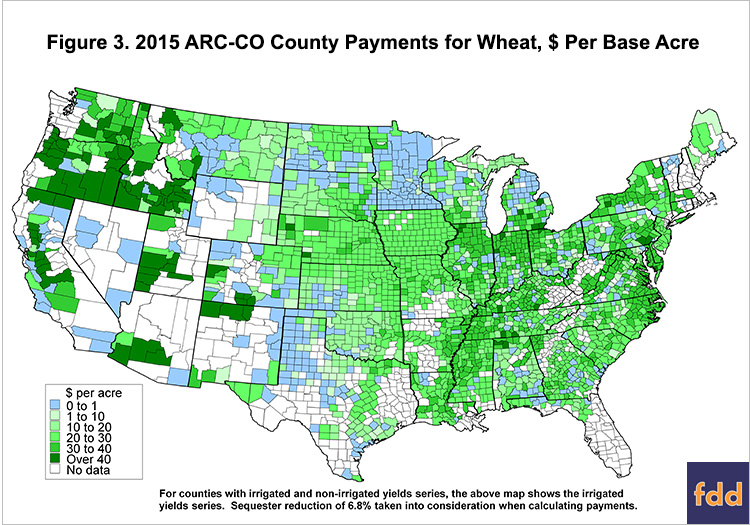 With the release of final county yields by FSA, ARC-CO payments for many counties can be finally calculated. Because county average yields impact whether the program triggers, there are some counties in which a $0 ARC-CO payment occurs. In these counties, actual 2015 yields significantly higher than the benchmark yields, resulting in actual revenue above the guarantee despite low price levels.

Table 1 reports 2015 ARC-CO payments by county in Illinois for corn, soybeans, and wheat, and illustrates the variability in payments levels. Using corn as an example, Piatt county will not receive a 2015 ARC-CO payment. The county corn yield in Piatt was the highest county yield in Illinois at 221 bushels per acre, or more than 30% greater than Piatt’s 169 bushel per acre benchmark yield. Thus, high corn yields in Piatt were enough to offset the low MYA price so that actual revenue was above the guarantee resulting in no ARC-CO payment for corn.

Across most counties in the US, ARC-CO payments for 2015 on corn, soybean, and wheat base will provide much needed additional cash flow on grain farms as net farm income projections for 2016 continue to be low due to low commodity price levels (see daily article from September 27, 2016). However, these payments will not completely offset the lower prices and the remaining, stubbornly high costs that contribute to negative projected cash flows. An urgent need to cut cash flows now and through 2017 continues to exist. 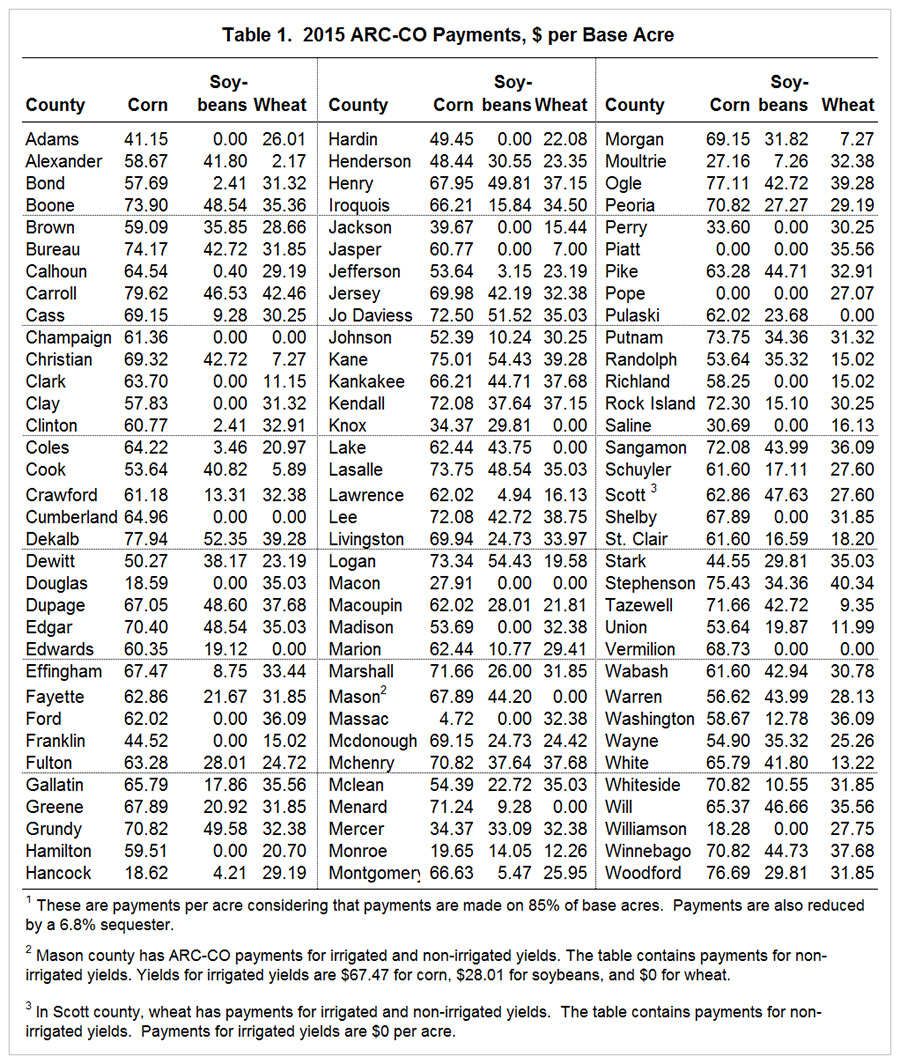