More than 48 million D3 RINs were generated during the third quarter of 2016, bring total generation for the year to just over 127 million. Extending the average monthly pace through the end of the year suggests a total of 170 million D3 RINs will be generated in 2016. Through September, nearly 2 million D3 RINs have already been retired for non-compliance purposes. Even with the increase seen in the 2nd quarter and 3rd quarters of 2016, the pace of D3 generation is still falling short of the 230 million RIN gallon mandate level for the year.

Figure 1 plots monthly D4 RIN generation relative to implied monthly mandate needs (annual mandate divided by 12) using data from the EMTS through September 2016. Gross generation of D4 RINs averaged 217 million per month during the first quarter, increased to nearly 330 million per month in the second quarter, and increased again to average nearly 370 million during the third quarter. Total generation of D4 RINs stands at 2.75 billion through September, suggesting total generation for the year will reach nearly 3.7 billion. This increase in D4 RIN generation is continue to remain consistent with historical biodiesel production patterns related to the scheduled expiration of the biodiesel tax credit at the end of 2016 (for more discussion on this see the July 27, 2016 daily article).

Trends in generation through the year suggest that more than enough D4 RINs will be generated to cover compliance with the 2.85 billion RIN mandate target for the year. However, non-compliance retirements of D4 RINs are at 17 million through September, and data from EIA shows that biodiesel exports through August currently stand at 67.8 million gallons. Extrapolating the current pace of exports through the end of the year and adjusting for an assumed 1.5 equivalence value implies RIN-equivalent biodiesel exports could exceed 150 million RINs, reducing the level of D4 RINs available for the 2016 biodiesel and advanced mandate compliance.

Gross generation of D5 RINs has also increased from an average of 4.2 million per month during the first quarter, to more than 6.7 million per month during the second quarter, and 12.7 million per month in the third quarter. Total D5 generation stands at just over 79 million through September, suggesting total generation of 105 million D5 RINs for 2016. Through September, a relatively small amount (100,535) of D5 retirements for non-compliance purposes have been reported in the EMTS. Net generation of D5 RINs continues to fall short of the advanced gap of 530 million gallons. The advanced gap represents the difference between the total advanced mandate (3.61 billion RINs), and the biodiesel and cellulosic mandate levels (2.85 billion and 230 million RINs, respectively).

Note that this advanced gap would not need to be filled using D5 RINs, rather it could be filled with D4 or D3 RINs if they are available beyond the specific biodiesel and cellulosic mandate requirements. Combining D4 and D5 generation data results in total non-cellulosic advanced RINs generated in 2016 of 3.8 billion, which would provide more than enough to cover the non-cellulosic mandate target of 3.38 billion. 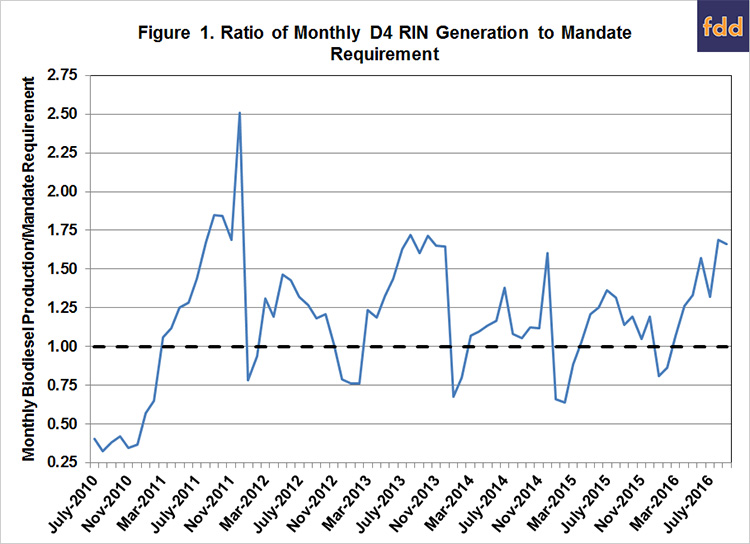 Figure 2 plots D6 RIN generation relative to implied mandate needs through September 2016. Monthly gross generation through the first quarter averaged 1.226 billion RINs, increased to 1.261 billion per month during the second quarter, and increased again to 1.285 billion per month during the 3rd quarter. Through September, a total of 11.3 billion D6 RINs have been generated, suggesting total generation for the year could exceed 15 billion. While this exceeds the 14.5 billion gallon portion of the mandate target which can be filled with D6 RINs, ethanol exports and retirements of RINs for other non-compliance purposes will reduce the total available for mandate compliance. Denatured ethanol exports through the first quarter averaged nearly 50 million gallons per month, but have declined below 30 millon gallons per month, on average, during the second and third quarters. Extending the observed pace of exports through the end of the year suggests a total of 430 million gallons. In addition, retirements of 2016 D6 RINs for other non-compliance purposes are reported at nearly 89 million RINs through September. Accounting for projected exports (430 million) and projected non-compliance retirements (120 million) suggests net generation at a level just at the targeted mandate level of 14.5 billion for 2016. 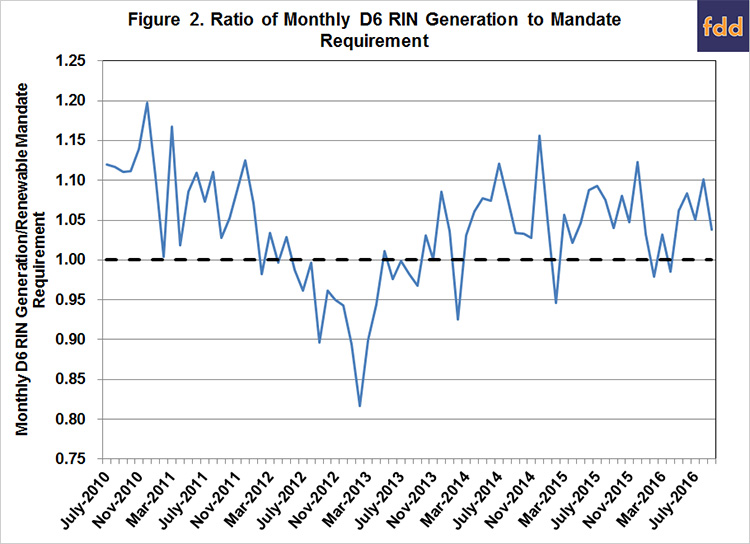 Previous quarterly updates for 2016 showed that generation levels earlier in the year suggested potential deficits of RINs eligible for use towards the 2016 mandate targets. RIN generation and retirement data from EMTS, and export data from the EIA and DOC through the third quarter of 2016 suggest that the pace of RIN generation has continued to increase across the D3, D4, D5, and D6 RIN categories. Updated projections for net generation continue to suggest a deficit of 50 to 60 million RINs available to meet the 230 million gallon cellulosic mandate, but sufficient generation of D4, D5, and D6 RINs to meet the non-cellulosic advanced and renewable mandate components at the target volumes outlined in the final rulemaking for 2016.

However, with lower crude oil prices, fuel consumption in the US has been surpassing the EPA estimates upon which the percentage-based renewable volume obligations (RVO) applied to obligated parties were based. This will tend to increase the actual mandate volumes above the targets outlined in the rulemaking (see the June 2, 2016 and June 10, 2016 daily articles for more detailed discussion). Thus, while projections through the 3rd quarter suggest sufficient generation of non-cellulosic advanced (D4, D5) and renewable (D6) RINs to meet the mandate targets in the final rulemaking for 2016, higher levels of domestic fuel use will likely increase required RIN amounts for actual compliance beyond the mandate targets.