The U.S. biodiesel production industry has a distinct “feast or famine” pattern in terms of profitability. The industry made very large profits in 2011 and 2013, but losses in most years previous to 2011 and losses again in 2014 and 2015 (e.g., farmdoc daily, January 28, 2015; February 11, 2016). The feast or famine pattern has been closely tied to expiration of the $1 per gallon biodiesel tax credit in the face of binding RFS biodiesel mandates. The biodiesel tax credit is once again scheduled to expire at the end of 2016. The purpose of this article is to investigate whether a boom in biodiesel prices and profits is ongoing similar to the booms that occurred in previous years when the biodiesel tax credit expired.

We begin by reviewing estimates of weekly biodiesel production profitability based on a model of a representative Iowa plant that uses soybean oil as the feedstock. Details on the latest version of the model can be found in this farmdoc daily article (February 11, 2016). The weekly estimates over January 26, 2007 through July 22, 2016 in Figure 1 are dominated by the two enormous spikes in 2011 and 2013, when profits exceeded $1 per gallon. These spikes in profitability can be directly traced to the race by diesel blenders to take advantage of the blender tax credit set to expire at the end of these two calendar years (e.g., farmdoc daily March 19, 2014). The key is that blenders face a binding RFS biodiesel mandate and it is rational to effectively purchase the biodiesel at a discount in the current year, due to the tax credit, in order to meet mandates in later years. Once the tax credit expires, the incentive to push up prices, profits, and production disappears and the biodiesel industry returns to a norm of losses. This cycle, of course, depends on blenders perceiving there substantial uncertainty whether the tax credit will be reinstated or not for the following year. 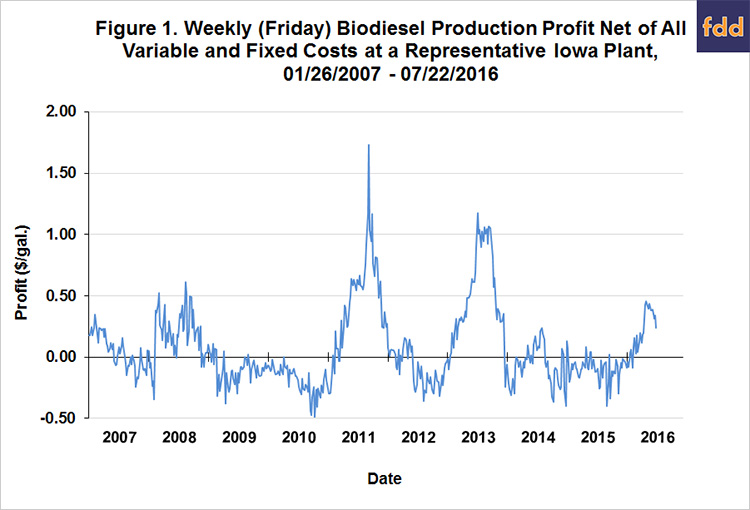 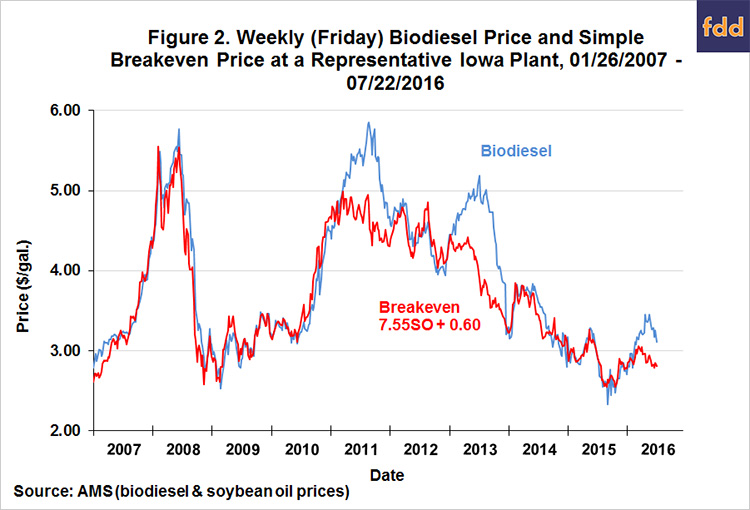 The breakeven relationship tracks the biodiesel price very closely except for the two major spikes in 2011 and 2013 and 2016 to date. In other words, outside of these periods, the market has generally priced biodiesel based on the cost of soybean oil, a partial markup for other variable and fixed costs, and zero profits. Implicit in this formulation is the idea that soybean oil prices lead (or cause) biodiesel prices at the weekly time horizon (farmdoc daily, September 10, 2015). The norm of losses outside of the spike periods can be traced to over-capacity in the biodiesel industry (farmdoc daily, February 11, 2016)

It is helpful to plot the difference between the two lines in Figure 2. Figure 3 shows this difference, which not surprisingly, closely resembles the pattern of profits in Figure 1. However, the difference has the useful interpretation in 2011 and 2013, and so far in 2016, as the amount that blenders are willing to bid up the price of biodiesel in order to take advantage of the expiring tax credit. It is no coincidence that the biodiesel price in 2011 and 2013 was bid up between $1 and $1.25 above the normal relationship to soybean oil prices. If blenders believe that there is substantial uncertainty whether the $1 per gallon tax credit will be extended, then it makes sense to bid the biodiesel price up by the full amount of the credit in order to maximize usage of the credit. In both 2011 and 2013 the market overshot the competitive market prediction by a bit. It is interesting to note that in 2016 the spike has not lasted as long and the biodiesel price has only been bid up by a maximum of $0.50 per gallon. Either there is a further $0.50 or more rise in the price of biodiesel forthcoming in the second half of the year, or the cycle is in the process of being completed much more quickly with a much lower spike than in 2011 and 2013. One possible explanation for a more muted spike in 2016 is that diesel blenders have a much different view about the odds of the tax credit being reinstated for 2017. After all, the tax credit has been reinstated every time it has expired since 2011. If blenders now believe there is a high probability that the credit will be extended as in the past, then the incentives for bidding up the price of biodiesel are lessened. 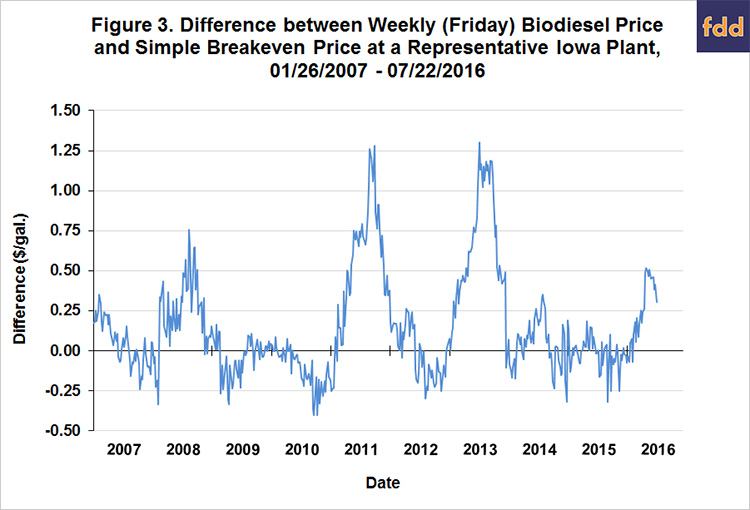 Finally, it is important to mention other factors that also could have contributed to the run-up in biodiesel prices and profits so far in 2016. First, there was a notable jump in biodiesel prices in May that coincided with the release of the EPA’s preliminary rulemaking for 2017 RFS mandates (farmdoc daily, May 26, 2016). The rulemaking contained further increases in the conventional, advanced, and biodiesel mandates, all of which signaled future demand increases for biodiesel. Even if this is relevant it can’t explain the increase in the price of biodiesel and production profits previous to the release of the EPA rulemaking. Second, a widely-discussed investment bank report released earlier this summer estimated that the available inventory of RINs was smaller than many had previously estimated. This again may have contributed but the stock reductions implied by the report were only a few hundred million gallons.

Biodiesel production profitability was mired in the red for most of 2014 and 2015. So far in 2016, profits have moved back into the black, reaching a peak of $0.45 per gallon in May. This followed the script of previous years, like 2011 and 2013, when the biodiesel tax credit was scheduled to expire at the end of the calendar year. Such spikes make sense because diesel blenders face a binding RFS biodiesel mandate and they can effectively purchase biodiesel at a discount in the current year, due to the tax credit, in order to meet mandates in later years. What is interesting about the 2016 version of this cycle is that it may not last as long or peak as high as in previous years. The most likely explanation is that blenders now believe there is a much higher probability that the credit will be extended than they did in the past, which lessens the incentives for bidding up the price of biodiesel. After all, the tax credit has been reinstated every time it has expired in the past.