While just 1.7 million D3 RINs were generated in January, generation jumped sharply to 14.5 million and 15.3 million in February and March, respectively. More than 31.5 million D3 RINs were generated in the first quarter, on pace for total gross generation of 126 million in 2016. Retirements of D3 RINs for non-compliance purposes are reported at 1.4 million through March, further reducing the number available for mandate compliance. The pace of D3 generation will need to increase considerably to meet the 2016 mandate requirement of 230 million RIN gallons.

Figure 1 plots monthly D4 RIN generation relative to implied monthly mandate needs (annual mandate divided by 12) using data from the EMTS through March 2016. Gross generation of D4 RINs was 191.8 million in January, rising to 204.6 million in February, and reaching 253.4 million in March. Total generation of D4 RINs during the first quarter suggests a total of just over 2.6 billion will be generated during 2016, which would fall nearly 250 million gallons short of the 2.85 billion RIN requirement for biodiesel this year. Non-compliance retirements of D4 RINs have totaled just over 600,000 during the first quarter of 2016. Data from EIA shows that 4 million gallons of biodiesel were exported during the first two months of 2016, implying D4 RIN retirement due to exports will reach approximately 37 million in 2016. This level of exports would be much lower than annual export levels since 2011. However, export data is only available for January and February and historical monthly export levels for biodiesel have been rather volatile. 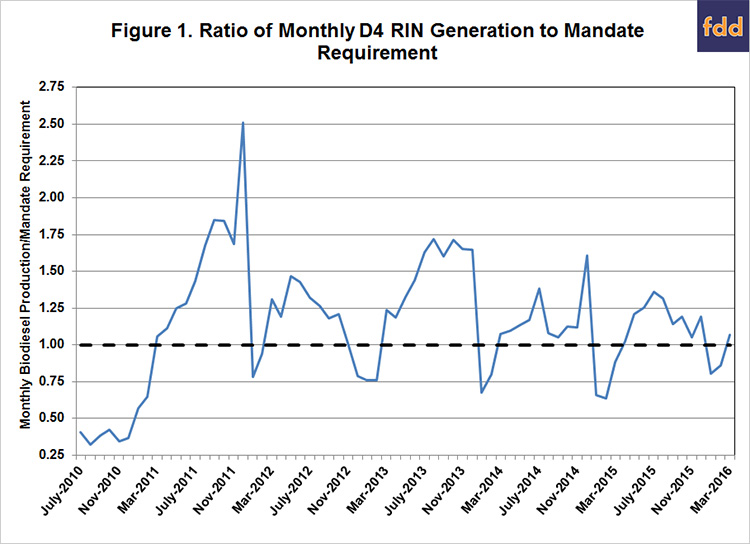 Gross generation of D5 RINs has averaged 4.2 million per month through the first quarter of 2016. This would imply total generation of just 50 million D5 RINs for the year, falling well short of the advanced gap of 530 million gallons. The advanced gap represents the difference between the total advanced mandate (3.61 billion RINs), and the biodiesel and cellulosic mandate levels (2.85 billion and 230 million RINs, respectively). Note that this advanced gap would not need to be filled using D5 RINs, rather it could be filled with D4 or D3 RINs if they are available beyond the specific biodiesel and cellulosic mandate requirements. Through March, no non-compliance retirements of D5 RINs have been reported in EMTS and it is assumed no ethanol exports will be associated with D5 or D3 RIN retirement.

Figure 2 plots D6 RIN generation relative to implied mandate needs through March 2016. Monthly gross generation through the first quarter of 2016 has averaged 1.224 billion RINs, suggesting total generation for the year will reach just over 14.7 billion RINs. This exceeds the 14.5 billion gallon portion of the overall mandate which can be met using D6 RINs. However, ethanol exports through the first quarter have averaged nearly 50 million gallons per month, on pace to reach nearly 600 million gallons for the year. In addition, retirements of 2016 D6 RINs for other non-compliance purposes, reported at nearly 3.2 million through the first quarter of the year, will further reduce the amount of 2016 D6 RINs which will be available for compliance. Accounting for projected exports and non-compliance retirements suggests net generation of 14.1 billion D6 RINs in 2016, or 400 million RINs shy of the mandate level for the year. 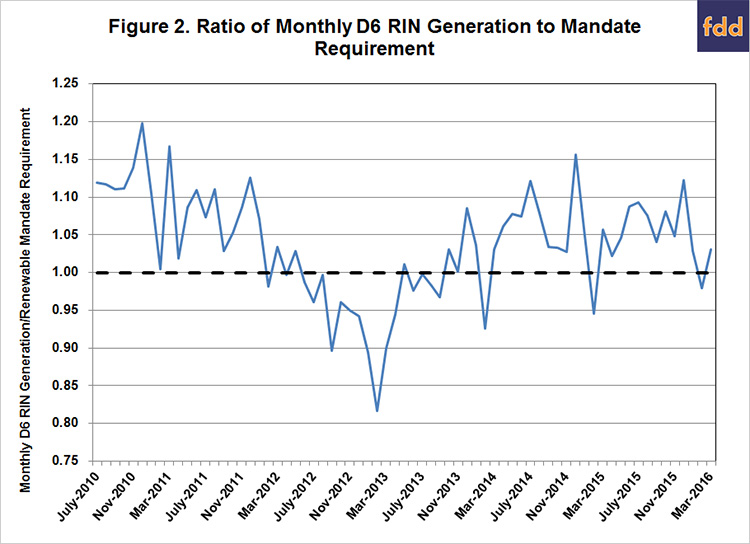 RIN generation and retirement data from EMTS, and export data from the EIA and DOC for the first quarter of 2016 suggest that the pace of net RIN generation is behind what would be needed to meet the 2016 RFS mandate compliance. This is true across all mandate categories based on the data available for each of the individual RIN D-codes. The projections suggest a 109 million D3 RIN deficit for the cellulosic mandate and a 287 million D4 RIN deficit for the biodiesel mandate. Including data for D5 generation results in an estimated deficit of 876 million RINs for the total advanced mandate. Net generation of D6 RINs is also projected to result in a deficit of 401 million RINs relative to the 14.5 billion gallon renewable component of the overall mandate. Overall, a deficit of 1.277 billion RINs is projected for 2016.