With harvest at a close, fairly accurate estimates of yields can be made, leading to more accurate estimates of 2016 gross revenues. Gross revenues and returns for corn and soybeans grown in central Illinois are presented in this article. Compared to 2015, 2016 gross revenue is projected to be lower for corn even though yields are much higher in 2016. Gross revenue for soybeans is projected higher in 2016 than in 2015 because of higher yields and prices. Overall, returns will average positive across corn and soybeans, but will still be at very low levels. Incomes in central Illinois will be higher on most farms in 2016 than in 2015.

These 2016 projections are compared to gross revenues from 2000 to 2015 in graphs (see Figure 1). Components of revenue will be stacked in bar graphs, where the sum of the above three components equals gross revenue. For comparison purposes, total costs for cash rent farmland also are given. These costs are all financial costs and include non-land costs and cash rents. The levels of these costs are reported in Revenue and Costs for Corn, Soybeans, Wheat, and Double-Crop Soybeans. Overall, costs in 2016 are projected to go down.

U.S. Department of Agriculture projects 2016 yield for Illinois at 202 bushels per acre, the highest yield on record, which is 2 bushels higher than the 200 bushel Illinois yield in 2014. Farm reports suggest that central Illinois is having yields near those of 2012. As a result, a 231 bushel per acre yield is used for central Illinois, high-productivity farmland, the same yield for this group in 2014. A $3.30 corn price is used in making 2016 projection.

Crop insurance is estimated to be $10 per acre. This is the same as the average for 2014. 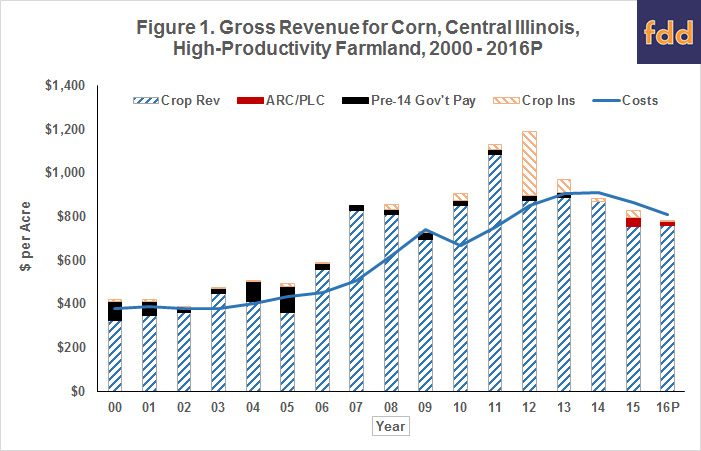 Gross revenue is projected below average costs on cash rent farmland. In 2016, costs are projected at $811 per acre, $19 higher than gross revenue. If projections hold, 2016 will be the third year in a row where total costs exceed gross revenue.

Similar to corn, ARC-CO payments are projected at $20 per acre. Crop insurance is projected to be very low at $4 per acre. 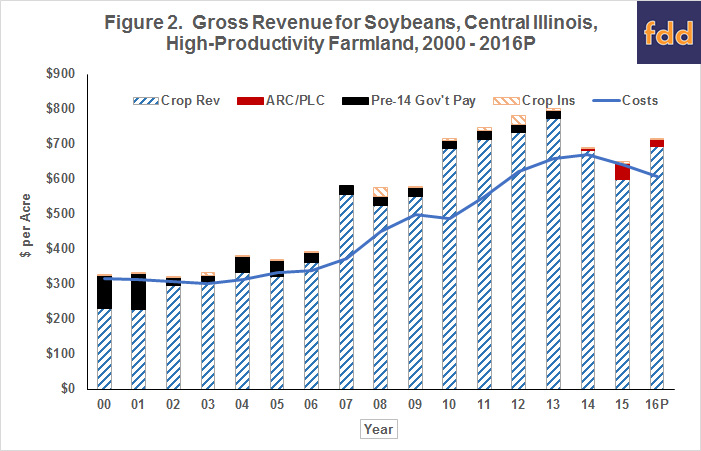 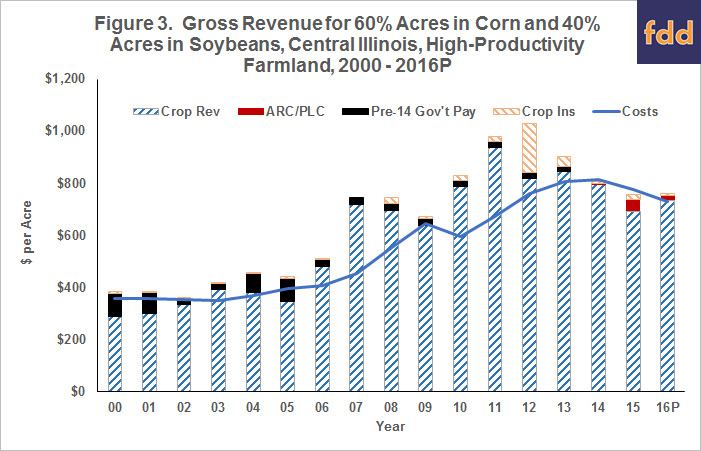 The following observations come from the above revenue projections:

The above estimates are averages. Farms will differ from these averages because of yield and price differences.

Central Illinois is having above average yields for both corn and soybeans. Regions or farms that have average yields or lower will have much lower incomes. For these farms, incomes in 2016 likely will be lower than 2015 incomes.

The above are projections. Yields likely are close to final levels. Revenue changes would result if prices either increased or decreased substantially.

Schnitkey, G. "Revenue and Costs for Corn, Soybeans, Wheat, and Double-Crop Soybeans, Actual for 2010 through 2015, Projected 2016 and 2017." Department of Agricultural and Consumer Economics, University of Illinois at Urbana-Champaign, September 2016.