We recently began a series of articles to evaluate the history of corn and soybean yields and deviations from trend yield in Brazil and Argentina. The objective of the yield analysis is to provide a basis for forming expectations about the likely yields of the 2017 crops. Previous articles focused on the alternative sources of historical yield estimates, the selection of the appropriate series to use in the analysis for both corn and soybeans, and the selection of the best-fitting trend model for each commodity and country (farmdoc daily, November 2, 2016; November 9, 2016; November 16, 2016). The focus of this article is on first and second crop corn yield trend estimates and trend deviations in Brazil. Brazil is now the third largest corn producer in the world and recently, rose to be the second largest corn exporter. Because most of the recent growth has been associated with second crop corn, it is important to examine trend estimates and trend deviations separately for the first and second corn crops in Brazil.

In our previous articles on corn and soybean yields in Argentina and Brazil we selected the yield estimates provided by the USDA’s Foreign Agricultural Service (FAS) as the most appropriate estimates. However, separate data on first and second crop corn yields in Brazil are not available from FAS. The National Food and Supply Company (CONAB), a public company allied with the Ministry of Agriculture, Livestock, and Supply in Brazil, does make estimates for both crops. Before using the CONAB data on first and second crop yields it is useful to compare FAS and CONAB data on national average corn yields in order to shed light on measurement errors that may be present in the CONAB data. Figure 1 provides a comparison of FAS yield estimates for Brazil relative to CONAB yield estimates. In both cases, Brazilian corn yield estimates are weighted averages of the first and second crops by using production and planted acreage for each crop during the year to calculate corn yield. Note that the yield estimation methodology used by CONAB is very different than used by NASS to make yield estimates for the U.S. Specifically, CONAB yields are based on past trends, expert opinion, and industry intelligence, while NASS yields are based on random samples of farm operators and field measurements. The different data sets show some deviations from one another in the 1990’s and the first decade of the 2000’s, but overall there is very little difference in the two series. This suggests we can proceed with analysis of the separate CONAB series on first and second crop yields with reasonable confidence in the accuracy of the data. Finally, note that, as previously discussed in the farmdoc daily article of November 9, 2016, we estimated the trend for Brazil for two time periods–1961 through 1988 and 1989 through 2016–in order to reflect what appears to be a trend change in the late 1980s. The trend change may be associated with the timing of the rapid expansion of second crop corn area. 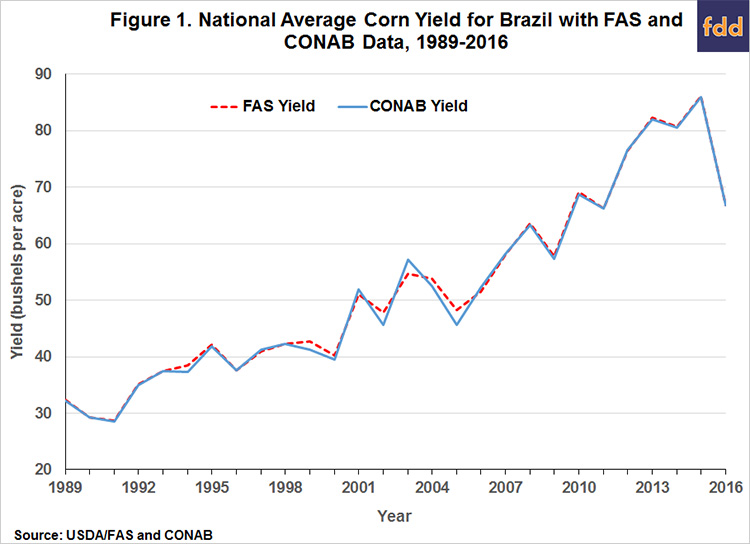 Figure 2 presents acreage data that reflects the changing nature of Brazilian corn planting over the 1989 – 2016 period. Total harvested acreage of corn in Brazil has only increased marginally but the composition has changed tremendously. Specifically, second crop corn acreage grew rapidly over the period and surpassed first crop corn acreage in 2012. Second crop corn planted acres accounted for approximately 65% of total corn acres in Brazil in 2016. The second crop, known as Safrinha, is normally planted between January and March and harvested between June and August. A large portion of the crop is grown in the Central-West region of Brazil and is susceptible to the monsoonal dry season in these regions of Brazil. The first crop of corn in Brazil is grown in the traditional and more temperate corn regions of the South and Southeast. This crop is planted in September and harvested in March. As can be seen in Figure 1, this crop is declining, and the traditional corn regions are moving to second crop corn over time. 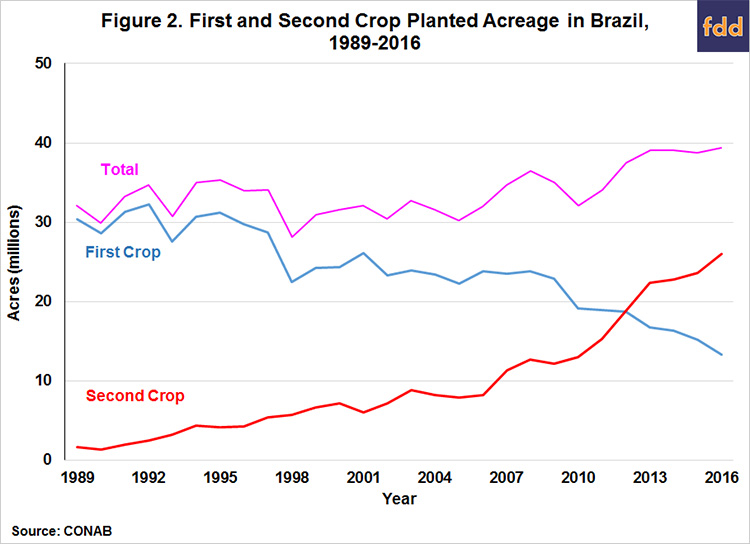 Double-cropping is extensive in Brazil with soybeans-corn and soybeans-cotton being major cropping strategies in many regions. The predominance of double-cropping has led to the growth in second crop corn production. The rise of the second crop production strategy is also directly linked to the increase in Brazilian corn exports. Most of the first crop is used domestically while the second crop is exported to a greater extent. The harvest of second crop corn occurs after Brazil’s major soybean export period and allows for more efficient movement of corn out of the country.

This analysis examines trends and trend deviations for Brazilian corn yields during the 1989-2016 period. We use average corn yield estimates, not adjusted for varying weather conditions from year to year, for the period 1989 through 2016 to determine the form of the trend that best fits those yield estimates and to calculate the trend yield for 2017. It should be noted that using yields that are not adjusted for varying weather conditions actually results in a slight under-estimate of trend yield due to the asymmetric effect of weather on actual yields (Swanson and Nyankori, 1979; Tannura, Irwin, and Good, 2008). That is, poor weather reduces yields more than good weather improves yields so that the impact of technology (trend) is under-estimated due to sharp reductions in yield from poor weather years. Our previous research on U.S crop weather models that adjust for the asymmetric effect of weather on crop yields indicates the downward bias is about one-tenth of a bushel for the trend coefficients (Irwin, Good, and Tannura, 2009). 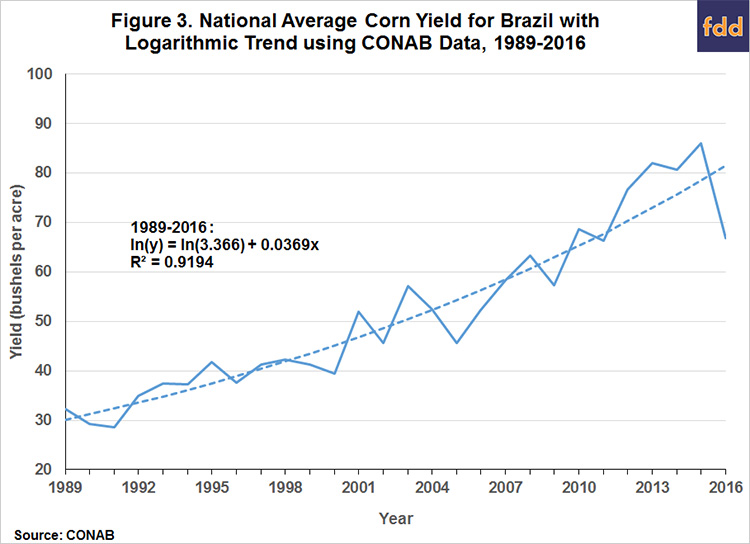 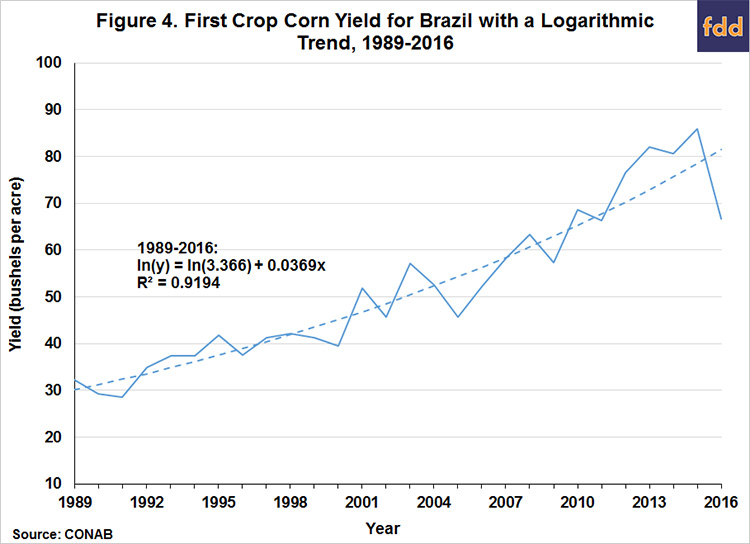 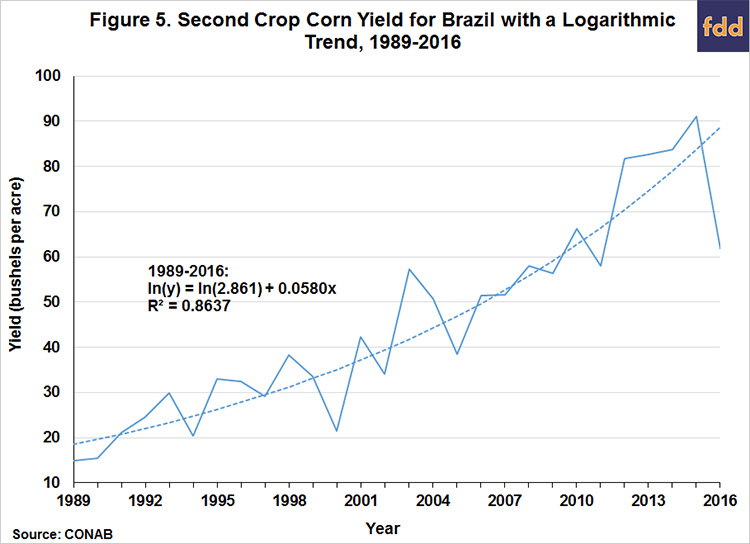 Historical deviations for national average Brazilian corn yields for the period 1989-2016 are shown in Figure 6. Building on a previous analysis of international grain yields in this farmdoc daily article by Carl Zulauf (November 11, 2015), we investigate the yield variability occurrences in Brazilian corn production in more detail. Over the 28-year period, the average Brazilian corn yield was above trend in 16 years and below for 12 years, or about 57 percent of the time above trend and 43 percent below. The average positive deviation was 3.67 bushels while the average negative deviation was -4.37 bushels. Mirroring U.S. yields, positive deviations above trend are more frequent but smaller compared to negative deviations. The largest deviation below trend was 15 bushels per acre in 2016. Two of the largest deviations above trend were approximately 9 and 7 bushels in 2013 and 2015, respectively. It is clear that yields have been highly variable in recent years, with what appeared to be a sharply increasing yield trend until the 2016 drought. 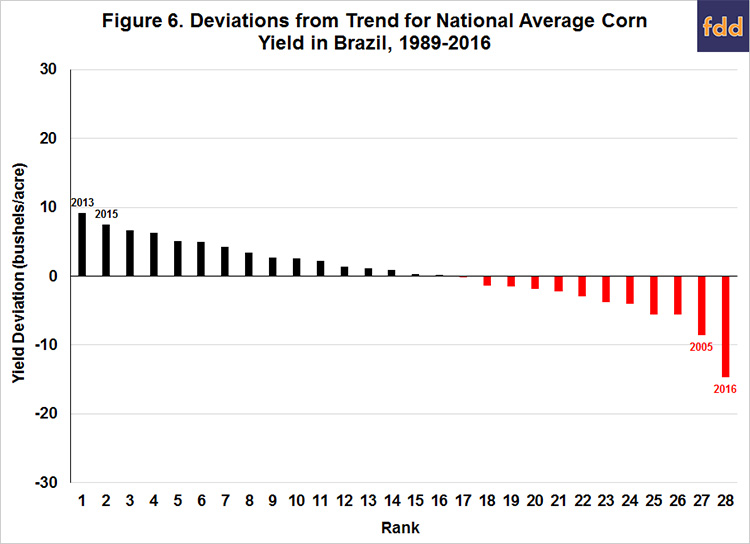 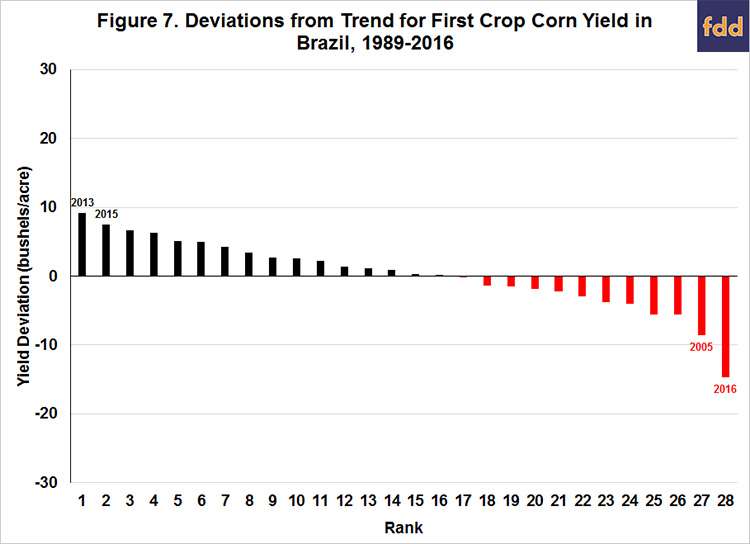 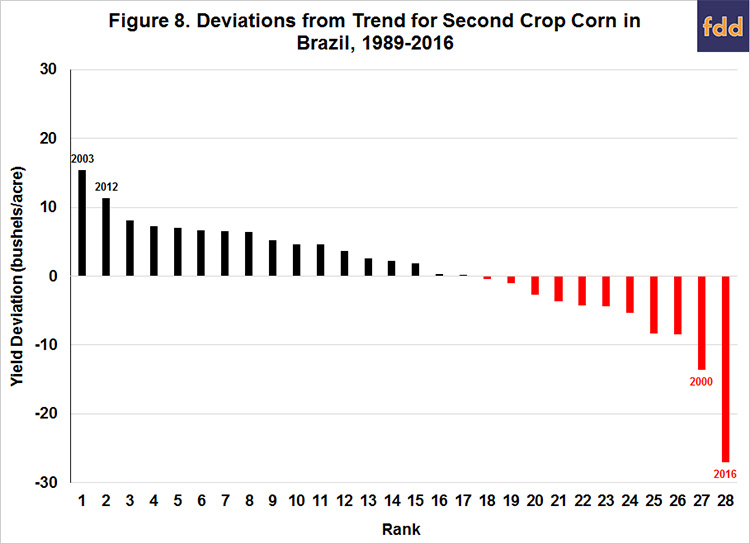 Clearly, the second crop corn yield is substantially more variable than the first crop corn yield relative to trend. This is related to the regions where the second crop is grown and the different weather patterns for second crop production. In particular, the monsoonal sub-tropical climate where much of the second crop is grown has distinct wet and dry seasons. If the dry season starts earlier than normal there is little chance for recovery in production prospects. There is also increased risk to second crop yields in the traditional southern growing regions simply due to trying to squeeze two crops into one growing season. The resulting higher variability of second crop corn yields has direct implications for the riskiness of total Brazilian corn production since the second crop has grown to approximately 60 percent of the total corn crop over the last five years. Specifically, it is no longer appropriate to project the riskiness of national average corn yield in Brazil based on the history of national average yields due to the changing composition of first and second crops. The only recourse is to separately estimate the risks for first and second crops and then take a weighted average of these risks to reflect the current dominance of the second crop.

An examination of the average first and second crop corn yields in Brazil for the period 1989 through 2016 reveals an upward yield trend in both crops, with substantial annual variation. The yields have not increased by a constant bushel value per year, but have increased by a constant percentage value. The estimated logarithmic corn yield trend for Brazil in 2017 is 84.8 bushels per acre, 18.05 bushels above the 2016 average, but 1.23 bushels below the record yield of 2015. The first crop corn yield trend is estimated at 84.5 bushels and second crop yield trend is estimated at 94 bushels. Based on the projections of harvested acreage in the USDA’s November 9 World Agricultural Production report, the trend yield for Brazil points to a 2017 crop of 3.438 billion bushels, 800 million bushels (30 percent) larger than the 2016 crop.

The deviation in yields calculations illustrates the large variability in yields possible with the second crop. For example, the second crop corn yield in 2016 was an astounding 27 bushels below trend. Given the recent dominance of second crop corn production, this means that it is no longer appropriate to project the riskiness of national average corn yield in Brazil based on the history of national average yields. In a future article we will analyze the historical deviations from trend yield in corn for Brazil and Argentina and evaluate conditional yields for each country under La Nina climate events in order to form yield expectations for 2017.