In response to the retroactive reinstatement of the blenders tax credit, sharing clauses are included in many marketing contracts between biodiesel producers and blenders. These clauses specify how the biodiesel tax credit will be shared between the biodiesel producer and blender if the tax credit is not in place at the time a transaction is made but is reinstated retroactively at some later date. There is no public data on the exact nature of the sharing provisions or the frequency that such provisions are put in place. Anecdotal evidence suggests sharing provisions are widespread and that the typical split is 50/50. Filings with the U.S. Securities and Exchange Commission (SEC) provide some indication of the magnitude of this source of revenue for biodiesel producers. After the tax credit was reinstated for 2014 in mid-December 2014, the Renewable Energy Group (REG), a U.S. biofuels producer, reported in an SEC filing that it expected to receive a net benefit of approximately $85 million to $90 million as a result of the $1 per gallon biodiesel tax credit being retroactively reinstated. Likewise, Neste Oil, a Finnish producer of biofuels, reported in its SEC filing that it had an operating profit of 141 million euros for the fourth quarter of 2014, including a contribution of 89 million euros from the reinstatement of the biodiesel tax credit. Clearly, the sums involved are large. We now turn to assessing the possible impacts on production profits.

We start with the same model of a representative Iowa plant to estimate biodiesel production profitability as in the farmdoc daily article of March 1. The details of the model and underlying data can be found in that article. It is important to note that the model is meant to be representative of an “average” plant constructed since 2006 to process soybean oil into biodiesel. Limiting the feedstock to soybean oil is reasonable since it represents about half of the feedstock used to produce biodiesel in the U.S. and feedstock prices tend to be highly correlated.

Figure 1 presents the weekly (pre-tax) estimates of biodiesel profits over January 26, 2007 through March 24, 2017 based on the price data and model assumptions. At this point, no adjustment is made for tax credit revenue in years when the credit is reinstated retroactively. Two enormous spikes in 2011 and 2013 dominate the weekly profitability estimates, when peak profits exceeded $1 per gallon. There is also a spike in profitability in 2016, but the peak was only about $0.50 per gallon. By comparison, the average level of profits in 2010, 2012, 2014, and 2015, years when the tax credit lapsed, is -$0.19, -$0.07, -$0.06 and -$0.11 per gallon, respectively. A sharing agreements of as little as 20/80 ($0.20 to producers) would swing margins from losses to positive profits in all four years. This highlights the potentially dramatic impact that retroactive tax credit revenue could have on production profitability. 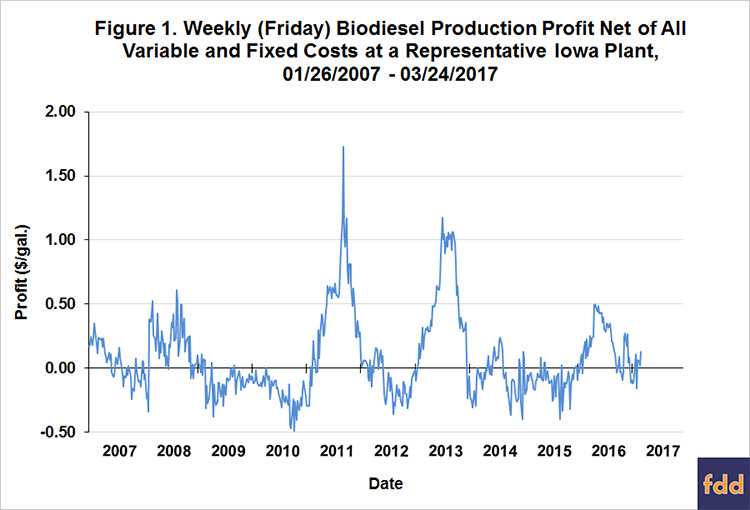 It would, of course, be ideal to have comprehensive data on sharing agreements in order to better estimate total biodiesel production profits in years when the tax credit is reinstated retroactively. Since that is not the case, the best we can do is make what is hopefully a reasonable assumption that helps to illustrate the impact. As mentioned earlier, anecdotal evidence suggests 50/50 sharing agreements are the norm in the industry. So, we simply add $0.50 per gallon to the weekly profits in Figure 1 for 2010, 2012, 2014, and 2015. We then aggregate the weekly adjusted profits to an annual horizon in Figure 2 and compare them to unadjusted profits. Of course, the adjusted and unadjusted profits outside of the four retroactive credit years are identical. 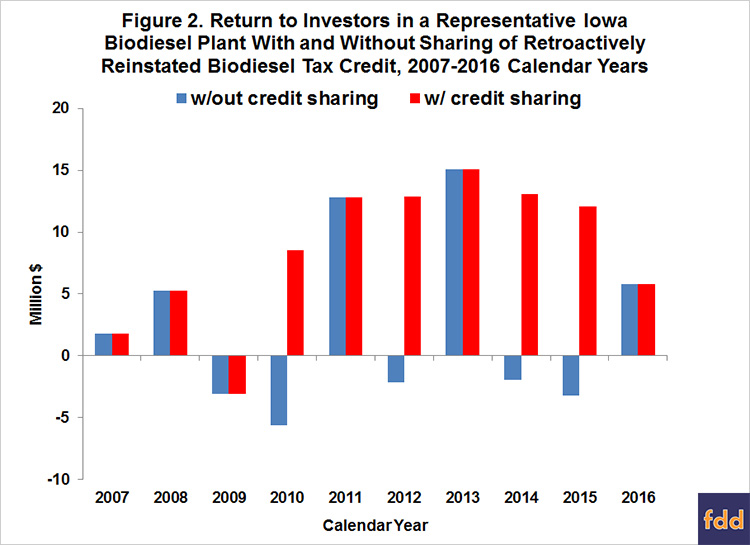 The impact of adding the retroactive tax credit revenue to profits is stunning both in terms of the four individual years and the overall profitability picture during 2007-2016. Since annual production is fixed at 30 million gallons for the representative plant, estimated profits increase $15 million each year with the additional tax credit revenue of $0.50 per gallon. Specifically, total estimated profits increase from -$5.6 to $9.4 million in 2010, from -$2.1 to $12.9 million in 2012, from -$1.9 to $13.1 million in 2014, and from -$3.2 to $12.1 million in 2015. This has the effect of raising the average profit over 2007-2016 from $2.5 to $8.5 million, more than a threefold increase. In addition, the number of years with a loss is reduced from five without credit sharing to only one year with sharing.

Previous analysis of U.S. biodiesel production profitability has not accounted for a little known feature of marketing agreements between biodiesel producers and blenders. These agreements include provisions for sharing the biodiesel tax credit if it is reinstated retroactively. Since the biodiesel tax credit is $1 per gallon, sharing of the credit could have a major impact on profitability in years where the credit is reinstated (2010, 2012, 2014, and 2015). We estimate biodiesel production profits for a representative plant with 50/50 sharing of retroactively reinstated tax credit revenue and without sharing. A 50/50 split is reportedly the norm in the industry. The impact of adding the retroactive tax credit revenue to profits is striking, increasing returns by $15 million in each of the years when the credit lapsed. The effect on the overall profitability picture is equally striking. The average return to equity holders without adjusting for retroactive tax revenue is 10.5 percent over 2007-2016 and the standard deviation, a measure of risk, is 30.2 percent. With the addition of $0.50 per gallon in years when the credit lapsed, the average return increases to a whopping 36.1 percent and the standard deviation drops to 25.0 percent.

In sum, consideration of the tax credit revenue garnered through sharing agreements yields a very different picture of the profitability of U.S. biodiesel production. Unfortunately, we do not have comprehensive data on the actual prevalence and terms of such agreements, so the estimates in this article should be considered suggestive rather than definitive. We also have not addressed the rationale for the sharing agreements in the first place. We will take up that issue in an upcoming farmdoc daily article.

Irwin, S. "The Profitability of Biodiesel Production in 2016."farmdoc daily (7):38, Department of Agricultural and Consumer Economics, University of Illinois at Urbana-Champaign, March 1, 2017.